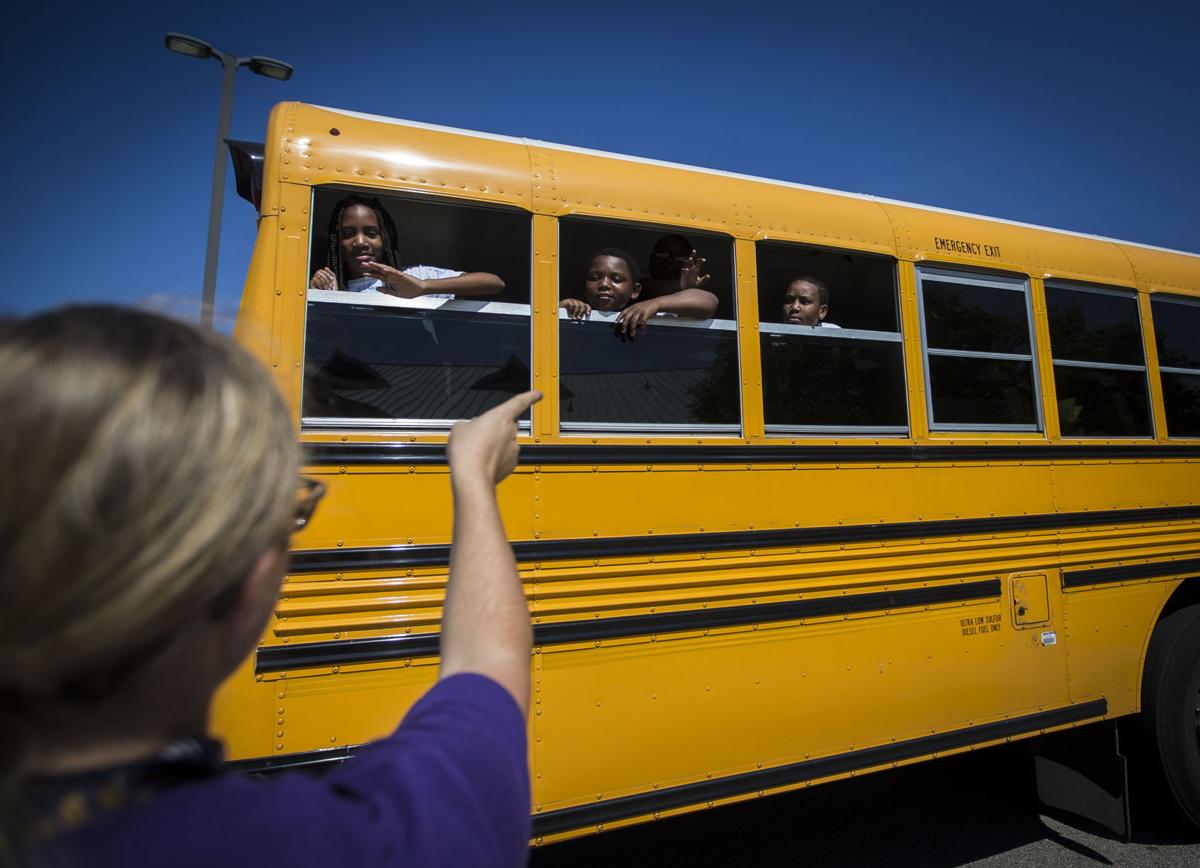 Students and teachers of Miles Jones Elementary School say "see you later" for summer break, June 15, Richmond, VA. Teachers held clapping toys and cheered as the students walked to the buses to go home on the last day of school.

State Superintendent of Public Instruction James Lane gave the keynote speech Tuesday on the second day of an education summit in Richmond.

Students and teachers of Miles Jones Elementary School say "see you later" for summer break, June 15, Richmond, VA. Teachers held clapping toys and cheered as the students walked to the buses to go home on the last day of school.

State Superintendent of Public Instruction James Lane gave the keynote speech Tuesday on the second day of an education summit in Richmond.

The Virginia Department of Education will release school accreditation ratings this month, an annual event that often determines the public perception of individual schools and school systems.

But this year’s release will feature a revamped system that drastically changes the way schools are judged and fulfills the state’s accountability requirements in a plan the federal education department approved earlier this year.

“This new system is taking us from labeling schools using the hammer of accreditation to really changing accreditation to a model more like a flashlight, where we’re shining the light on issues — not only the overall pass rate, but deeper into the school with student groups,” said the state superintendent of public instruction, James Lane, the highest-ranking K-12 official in Virginia.

The new accreditation system, approved in November by the Virginia Board of Education, is the centerpiece of the state’s U.S. Department of Education-mandated plan under the Every Student Succeeds Act, which replaces the George W. Bush-era No Child Left Behind Act. ESSA provisions take effect this school year.

Virginia’s plan was approved in May, making it the 38th state to gain federal approval. Florida is the only state without an approved plan.

In approving Virginia’s plan, U.S. Secretary of Education Betsy DeVos highlighted its method of holding schools accountable — its accreditation system — and the changes the state is making.

A school’s pass rates on Standards of Learning tests used to be the sole determinant of its accreditation rating. Now it’s not so simple.

Starting this year, elementary and middle schools are being evaluated on proficiency and growth in English reading and writing achievement, including the progress of students learning English as a second language, as well as performance in math and science. Achievement gaps in English and math, along with absenteeism, will also be used to evaluate those schools.

Including student growth in its measurement system reflects stakeholder feedback the state collected as part of its creation of its ESSA plan, where growth measures “ranked favorably” among those who took a state survey.

The issue of whether to measure proficiency or growth has been debated in education for years. These changes continue measuring how many students pass the state standards, but also reward schools for helping students improve on the tests.

“By recognizing growth, the revised accreditation standards provide a fairer evaluation of schools serving at-risk students,” the department said in its description of the changes. “Under the previous accreditation system, these schools were subject to being perceived as ‘failing’ even if most students were making progress toward proficiency.”

Schools are also being judged in how they reduced chronic absenteeism, which affects one in 10 students across the state, according to a University of Virginia study, with absence rates being worse in Virginia’s urban school districts, including Richmond.

Ratings for high schools will depend on similar factors, but also will include schools’ graduation rates and dropout rates. Starting in 2021, a school’s ability to prepare students for college and careers will be weighted in the rating.

The college career and civic readiness index, as it’s called, will measure how many students successfully complete advanced coursework, career and technical education coursework, and work-based and service-based learning.

If a school meets, exceeds, is near or making “sufficient progress” in all three (four in high school) accreditation indicators — student achievement, achievement gaps and absenteeism (plus graduation and dropout rate in high schools) — then it meets the state’s full standards of accreditation.

Being below the state standard on any one aspect of the state’s evaluation means a school is accredited with conditions, which requires instituting a plan to improve performance in that area.

Other states use numerical or letter grades to rate schools. Most states are using a summative rating system, like North Carolina’s A-F scale, to rate schools. Virginia is one of six states to use what’s called a tier-of-support system, which details how much support is needed to address students’ academic achievement.

If a school is denied accreditation in Virginia, for example, there’s more intervention than if it’s accredited with conditions.

Under ESSA, many states, including Virginia, are moving on from accountability systems focused mostly on test results and graduation rates.

Virginia’s accreditation standards hadn’t changed since 2015, and there haven’t been any changes to this scale in the past 20 years.

Through Virginia’s application process, the National Council on Teacher Quality, a Washington-based think tank, was critical of the state’s, and others’, efforts in their plans of preventing low-income students and students of color from being disproportionately taught by ineffective, out-of-field and inexperienced teachers, three groups that could potentially hurt student achievement.

Data in Virginia’s approved plan show a 1.2 percent gap between the number of inexperienced teachers in Title I schools — those with many children from low-income families — and non-Title I schools.

In a recent interview, Elizabeth Ross, managing director of teacher policy at the council, said she hoped Virginia would collect data on the three ESSA-outlined teacher groups before its current plan of doing so by Sept. 15, 2019.

“Virginia doesn’t have the data it needs to make sure it’s not systemically disadvantaging certain populations of students,” Ross said. “This is an area that really needs to be addressed.”

Dan Gecker, president of the governor-appointed education board that approved the plan, did not return a request for an interview.

Virginia was also granted a waiver that allows students who are enrolled in advanced math classes — starting in third grade — to take the math tests for those courses rather than the math assessment for their grade, which eases the testing burden for students.

An eighth-grade student enrolled in algebra I, for example, wouldn’t have to take the eighth-grade math test, just the end-of-year algebra exam.

“It gives us the flexibility that we had under No Child Left Behind, plus a little bit more,” said Lynn Sodat, the Virginia Department of Education’s program administration and accountability director.

While ESSA provisions begin this fall, some aspects of the No Child Left Behind replacement have a more delayed timetable.

One of the most public-facing aspects of the plan is the future ability to see, on a school-by-school level, how much districts spend per student. Currently, that is only available on a districtwide basis.

“That will offer our communities a lot more transparency around, not only how much money is being spent at the division level on schools, but really a school-by-school look at the resources available,” Lane said.

Developing that data has been a challenge for states, including Virginia, said Sodat, who added that state information is expected to be publicly available by December 2019.

ESSA also requires reporting how much money is spent in schools on staff compared with other expenses, a breakdown of how much money a school gets from the federal, state and local governments, and an analysis of student poverty levels.

Few states have tracked school level spending in the past and in those that did, disparities were clear.

In Rhode Island, for example, funding per student ranged from $9,000 to $45,000, depending on the school, Education Week reported.

Short for …. "Throw more money at it". Period

No they will find better ways to cheat