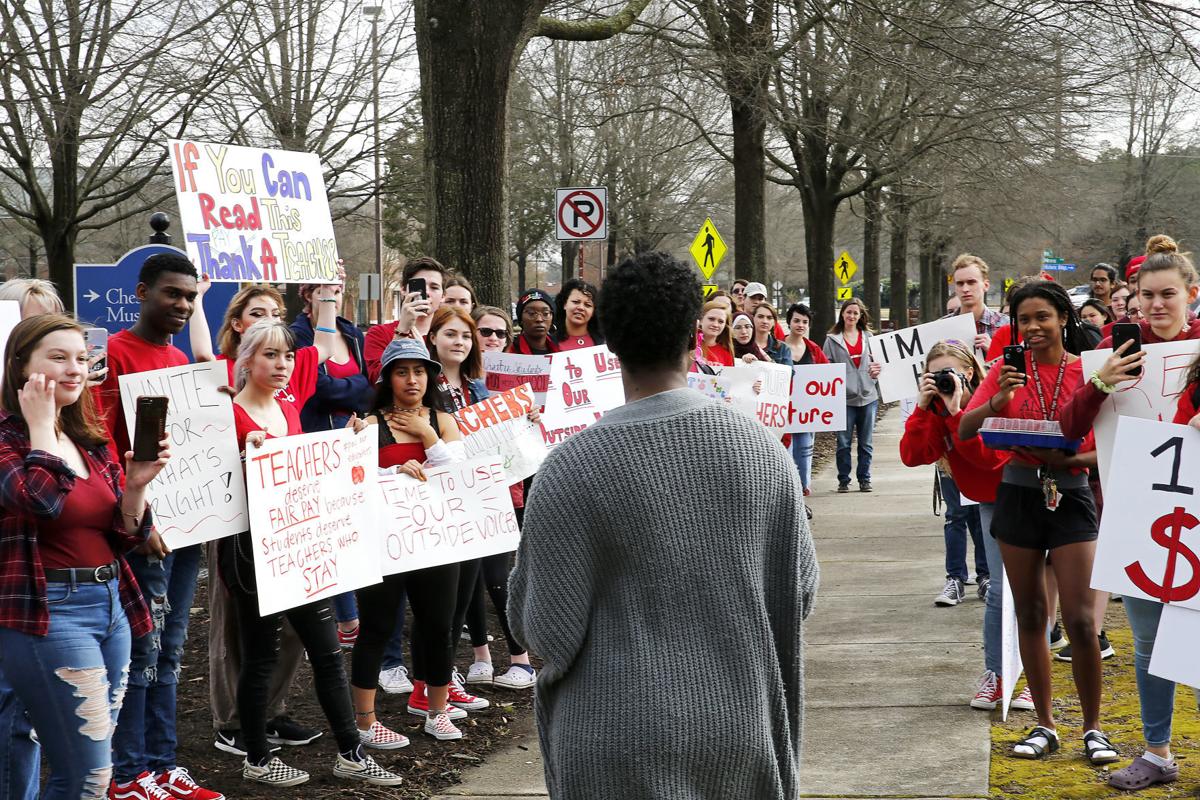 Students listen to Deja Williams, a Thomas Dale senior, as she speaks during their protest outside the Chesterfield County Administration building Friday, March 13, 2020. 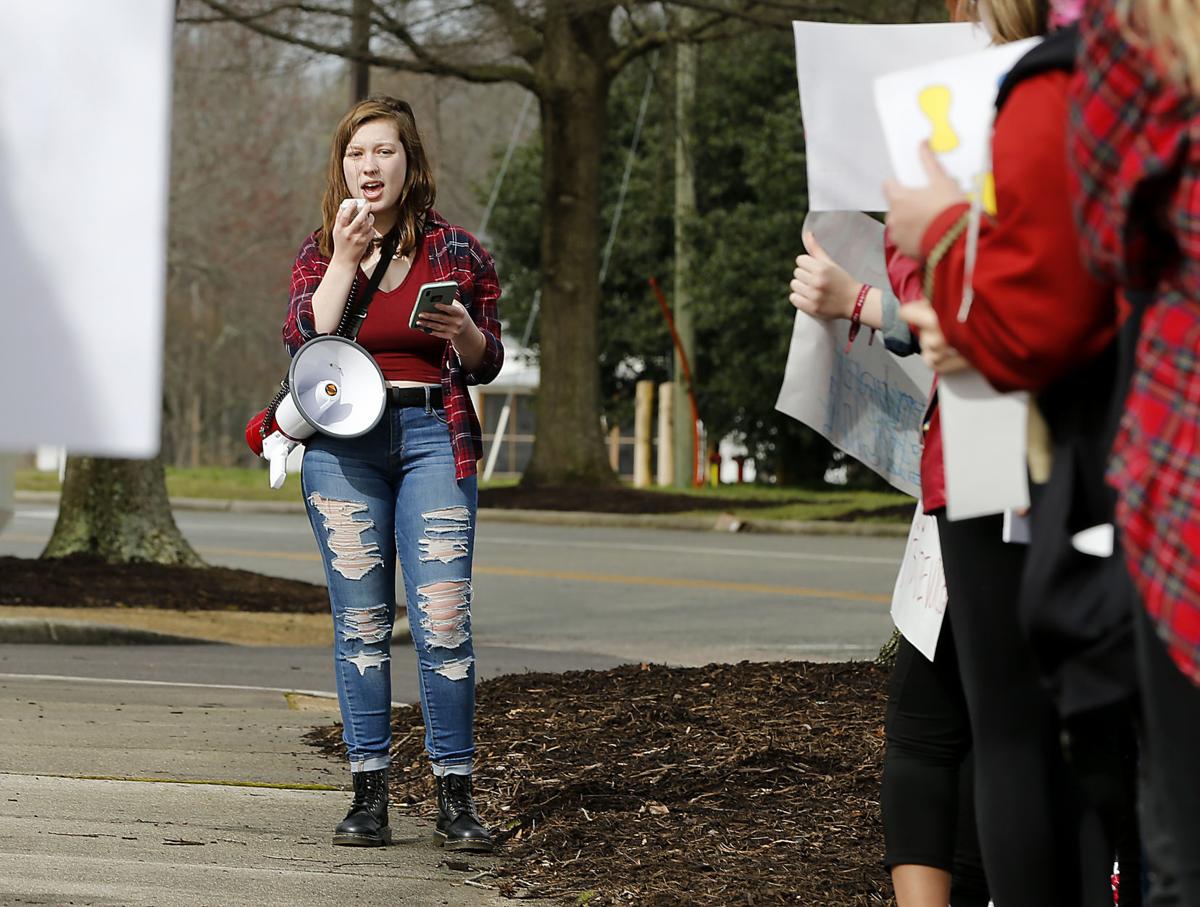 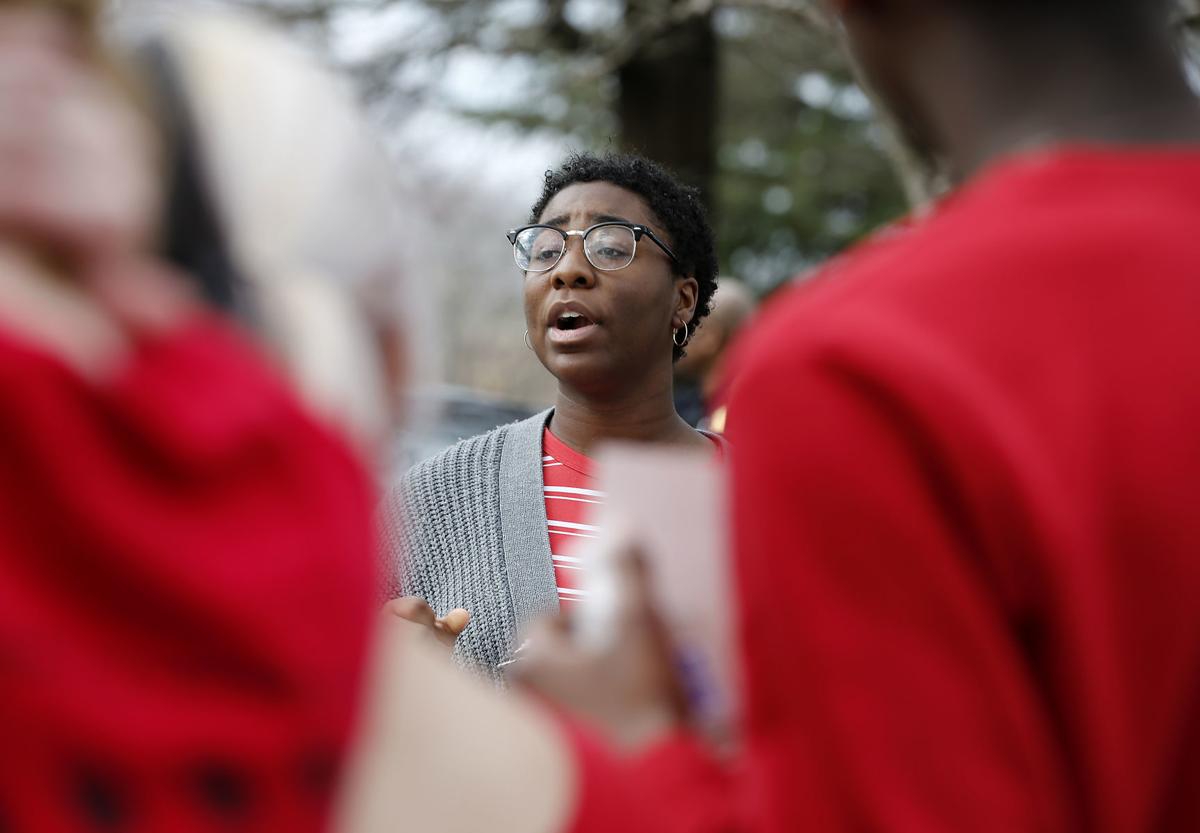 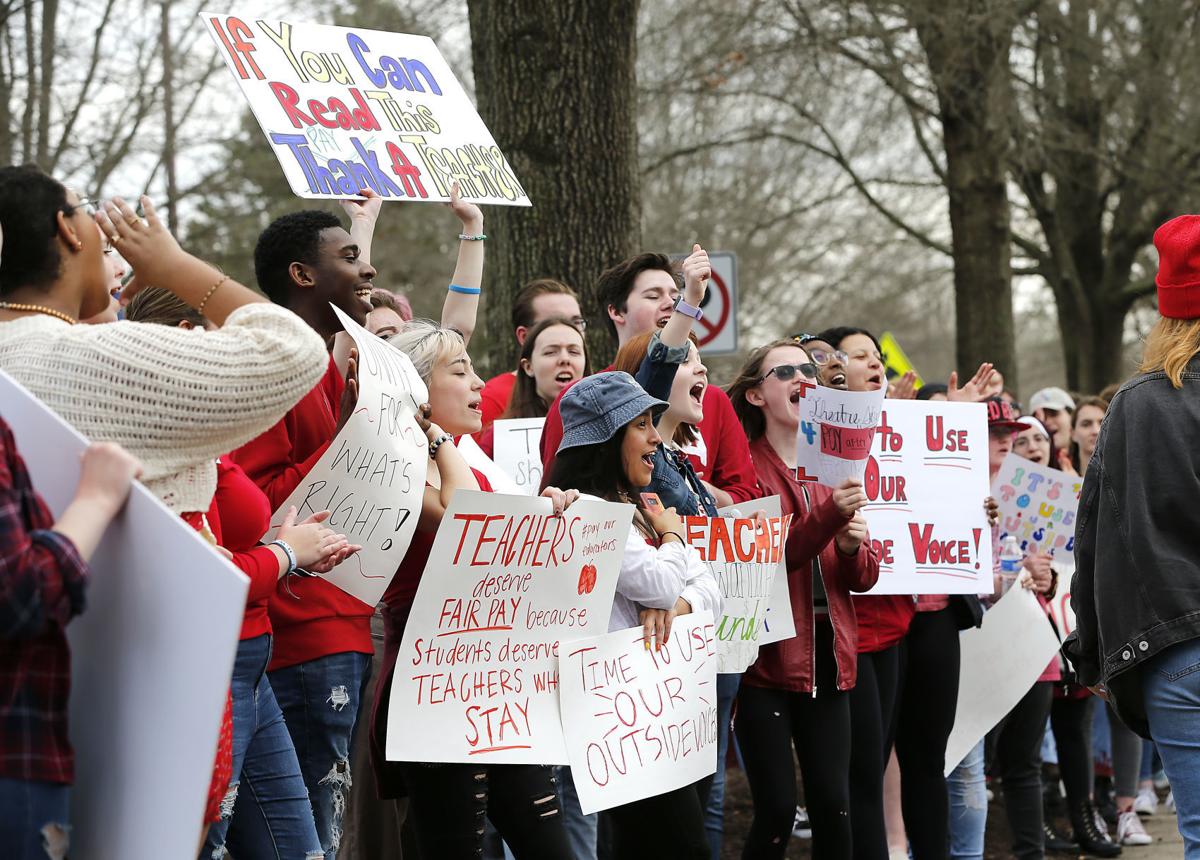 Students rallied at Chesterfield County’s administration building Friday, with classes canceled due to the coronavirus. 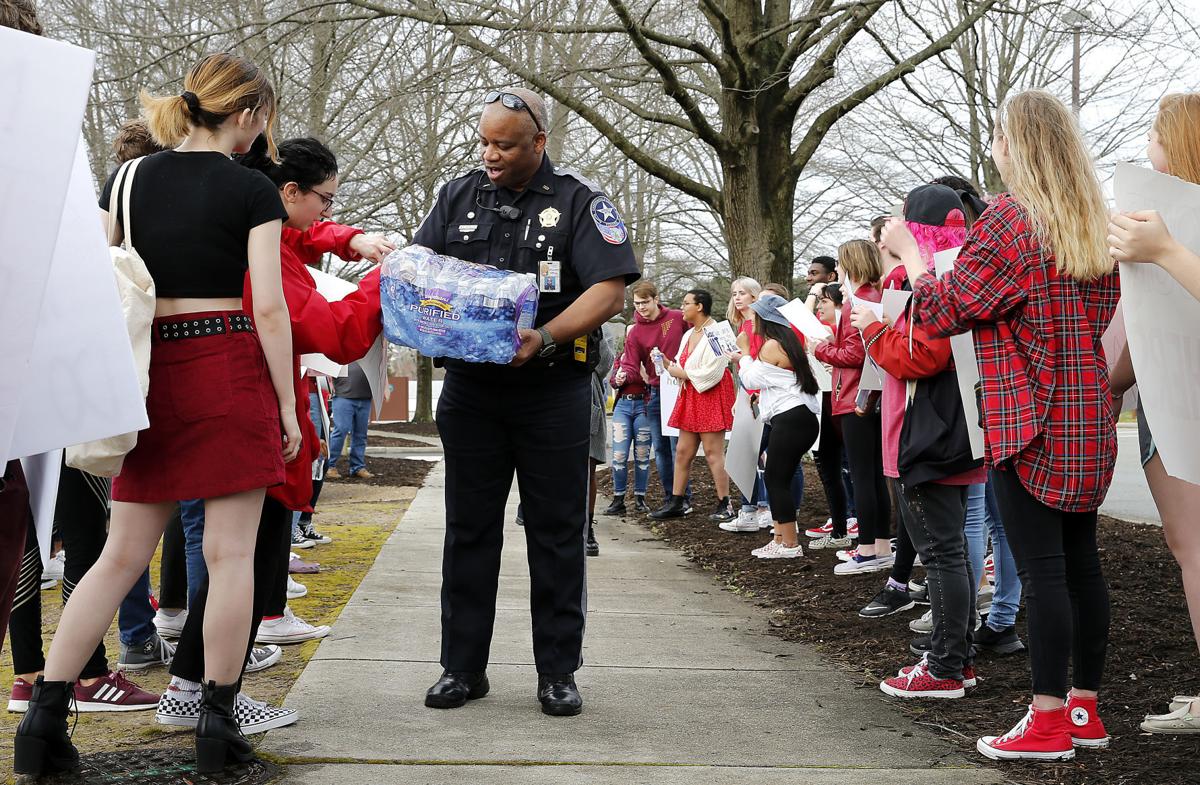 Lt. A.S. Mosley of the Chesterfield County Sheriff’s Office handed out water to the demonstrators. 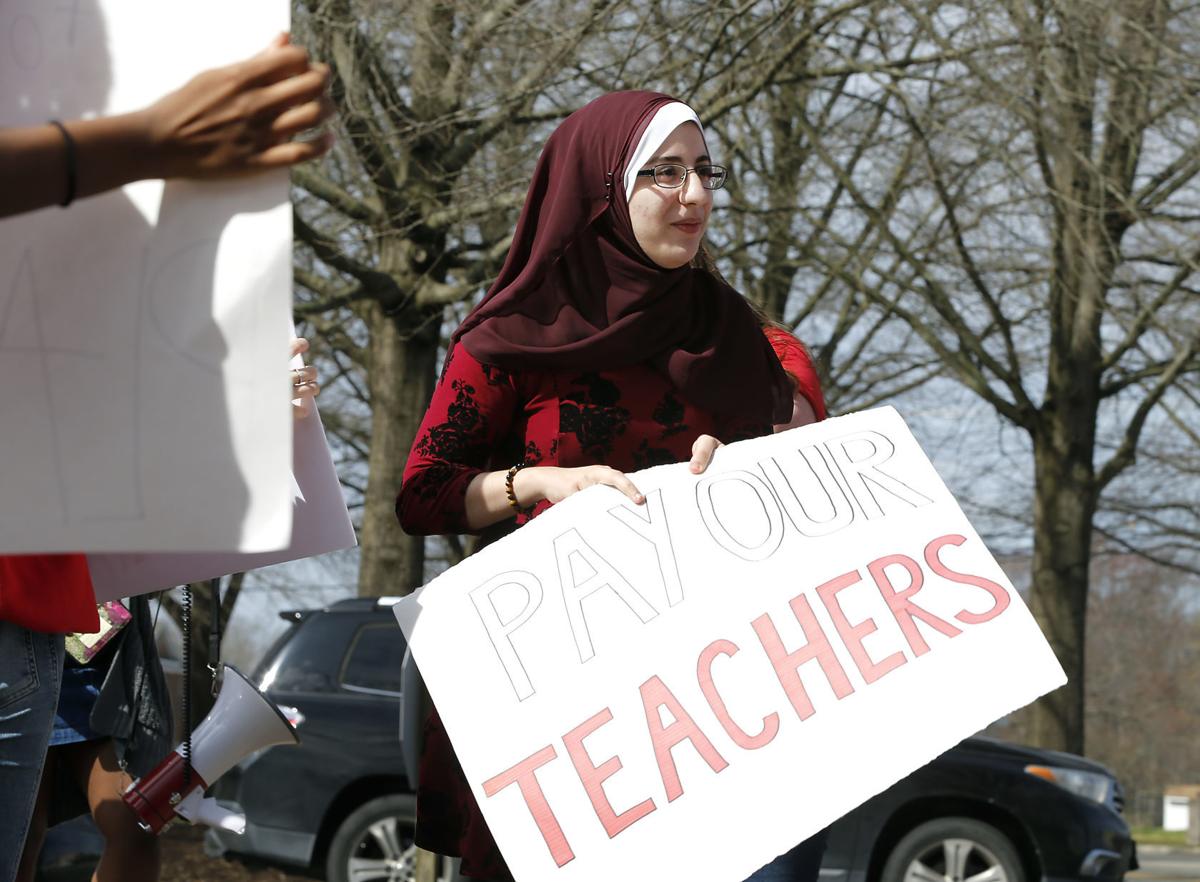 Students listen to Deja Williams, a Thomas Dale senior, as she speaks during their protest outside the Chesterfield County Administration building Friday, March 13, 2020.

Students rallied at Chesterfield County’s administration building Friday, with classes canceled due to the coronavirus.

Lt. A.S. Mosley of the Chesterfield County Sheriff’s Office handed out water to the demonstrators.

On Friday morning, nearly 100 Chesterfield students used their outside voices to protest comments made by the county administrator about teacher pay.

The idea to stand at the county administration building’s entrance developed the day before, when students received an email saying Chesterfield County Public Schools would close to students Friday in preparation for the coronavirus — news that foiled teachers’ original plan to protest by calling out sick Thursday afternoon and force schools to close once CCPS couldn’t satisfy all the substitute requests.

Instead, teachers were required to clean classrooms and develop instructional plans for the prospect of long-term cancellations.

Teachers’ “sickout” was planned in response to statements by County Administrator Joe Casey suggesting teachers could earn more by tutoring or fundraising.

The comments further angered teachers, who were already disappointed by the proposed 2% salary bump included in county budget plans for the upcoming fiscal year, a decrease from the 3% to 13% request Superintendent Merv Daugherty initially proposed in January. The county’s budget proposal also calls for a pay study that could lead to midyear raises for teachers above the initial 2%.

Deja Williams, a Thomas Dale High School senior and one of the student organizers, remembered getting a text at 10:40 a.m. Thursday from Emerson Pessarra, a fellow Thomas Dale senior. They had to protest in honor of the teachers, it read.

“We thought it was really important that our teachers shouldn’t be silenced,” said Williams, adding that she thought the county’s early decision to close on Friday, ahead of other neighboring school districts, was too coincidental.

They, along with senior Tayler Butters and other students, made signs at Pessarra’s house Thursday night directed at Casey that included, “Don’t tell teachers to get a second job when you can’t do your own” and “I shouldn’t have to marry rich to be a teacher.” Some baked cookies at 2 a.m. in reference to Casey’s suggestion of fundraising to supplement teachers’ paychecks or help reduce the amount they spend on classroom supplies.

Casey, in a statement sent through a county spokeswoman Friday afternoon, didn’t acknowledge the student protest but said the county is committed to improving teacher salaries. In regards to the teachers’ plans, he said Wednesday that he respects people’s freedom of speech.

“We all want to remove compression and pivot to higher amounts. This is an important topic for our community, and we will continue to work with schools to address it in the coming months,” Casey said Friday. “But today, our county is facing a very real public health issue.”

People in the crowd, a combination of students from Thomas Dale, Midlothian, Matoaca and Cosby high schools, spoke about the effect teachers have had on their lives and how frequently they have seen them stay past school hours. They do not have time during the school year for a second job, one speaker said.

VCU freshman Draciela España is an early education major who said CCPS teachers are what made her choose her career path.

Others mentioned their parents being CCPS teachers and seeing firsthand the difficulties that come with it. Williams’ mom is one of them.

“She’s been teaching for almost 20 years. She has a master’s degree. ... I’m going off to college next year and that’s expensive,” Williams said. “She’s still paying off her student loans.”

Alyssa, a Chesterfield teacher who disclosed only her first name because she was supposed to be at school, showed up to the protest to thank students. Her voice broke as she said they’re why she continues teaching. She said her salary has increased about $2,000 since she started five years ago.

Williams and Pessarra said this is only the beginning. They plan to show up at the Board of Supervisors meeting next week and are aiming to schedule a walkout once school is back in session.

Williams looked up at the administration building, in the direction of Casey’s office, before addressing the crowd.

“Get used to seeing us here.”

I say "Good on you!" to those teen activists for using their voices to stand up for their teachers. Your parents should be on the phone to that guy reading him the riot act if they couldn't stand alongside you.

As one who belongs to a group of young women who are a combination of the parents of young children and are teachers themselves or the spouse of a teacher I can assure all here that they are on the phone and up in arms. And the parents of all those children who would have required parental permission to stay out of school are also supportive.

The callous remarks mentioned in the article by County Administrator Joe Casey were the last straw for the already exasperated teachers. Bravo to those kids and parents and I hope that their efforts moves the needle in the teachers favor. County Administrators are prickly about adverse publicity.

Wrong! They should not be gathering up due to the coronavirus. they probably never listen to the news but the teachers do. The teachers should not encourage any of this activity right now due to the Virus and Government's request!

Hey wait a minute. You have an Amazing Administrator. Look teachers you get paid a lot more than us taxpayers when you include your benefits. I am calling you our on this one. Verses people like us who work retail —— you get off every holiday.... you get a week off for spring break.... you get off Christmas through to new year. You get summers off and even get retirement benefits you make more than 1/2 of us who are tax payers that pay you. What is the issue? You even have better health care than we do with our high deductibles plans. We don’t even get to see our doctor unless we pay to see if we have the Corona Virus. So exactly how are you not getting compensated for?

Uh... teachers ARE taxpayers. And get much worse benefits than average private sector employees and far lower wages.

That's a broad statement Drake ... that teachers "get worse benefits than average private sector employees and far lower wages." I seriously doubt this is true. But would be nice to see the benefits these Chesterfield County teachers receive. Would anybody like to post the information here?

But Gwenn, you have no problem with what I was responding to? The sweeping statement that teachers are lavished with benefits and pay so should not complain?

How much of that summer vacation in teacher preparation for the coming academic year? LOTS. How much "free" time is spent grading papers and tests and planning? How many lunch times do they give up being available to students who have questions? How many of them pay for supplies out of their own pockets?

When it comes to how much teachers are paid, I would appreciate it if you would just shut your stupid yap. You know nothing.

No wonder teachers and students are up in arms after being stiffed with a raise of only 2% followed by callous remarks that if they need more money they should get more jobs.

Teachers should have only one concern.... one of the highest.... education of the next generation of Americans.

Teachers were among the first whose wages were frozen during the last republican recession. They have not yet recovered from those cuts and in Chesterfield they are again being denied parity.

In this “great” economy that Rump keeps bragging about it’s time to raise teacher salaries to fair levels.

They are teaching our kids socialism

I believe that is Bernie and his three witches of the House!