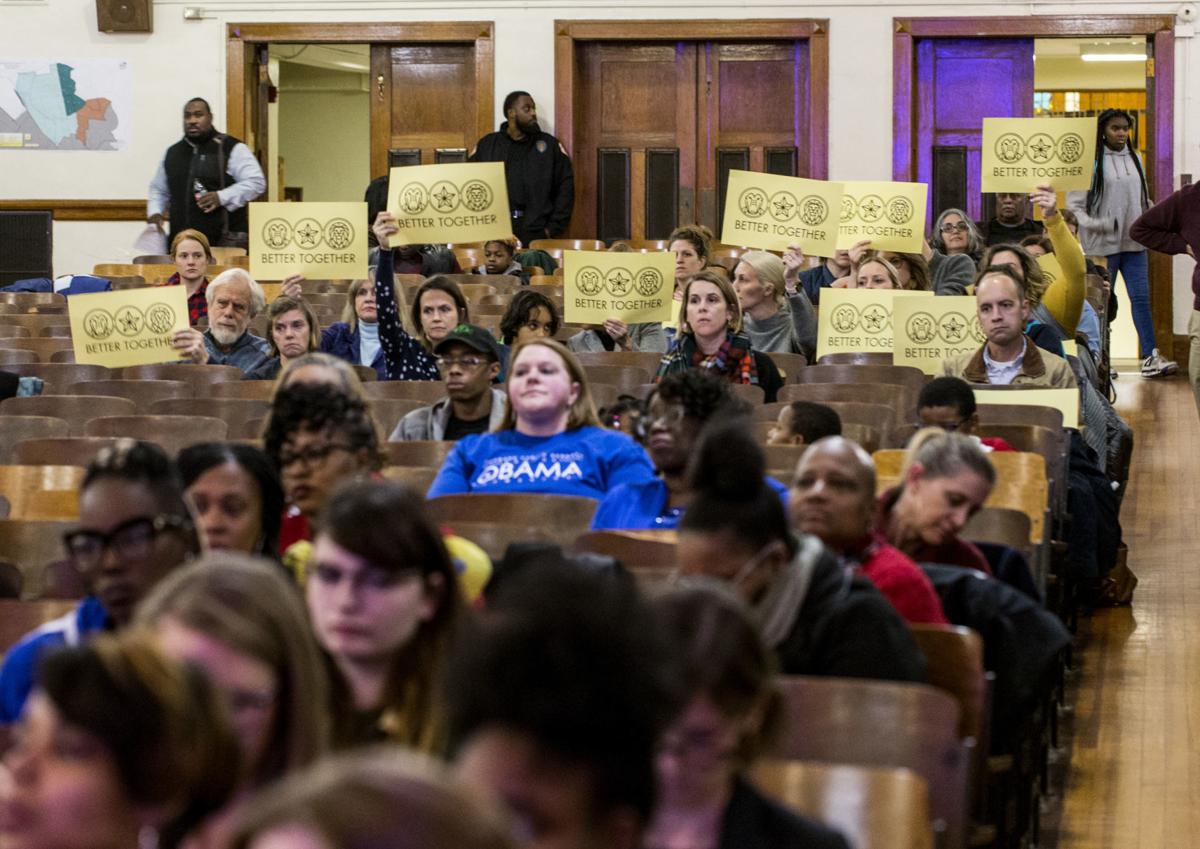 Participants held signs reading “Better Together” during a North Side rezoning meeting at Ginter Park Elementary School in Richmond on Monday. 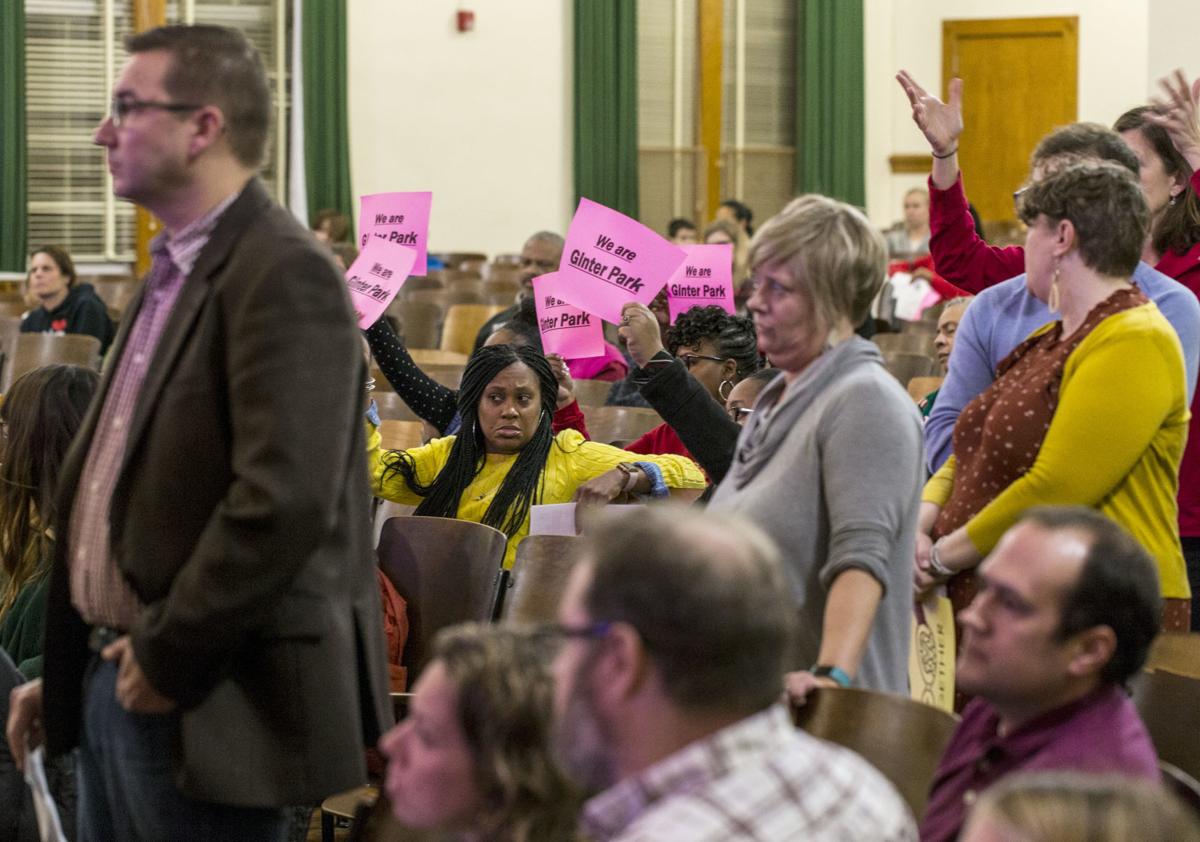 During a meeting at Ginter Park Elementary School on Monday night about Richmond school rezoning, some attendees held signs saying “We are Ginter Park.” 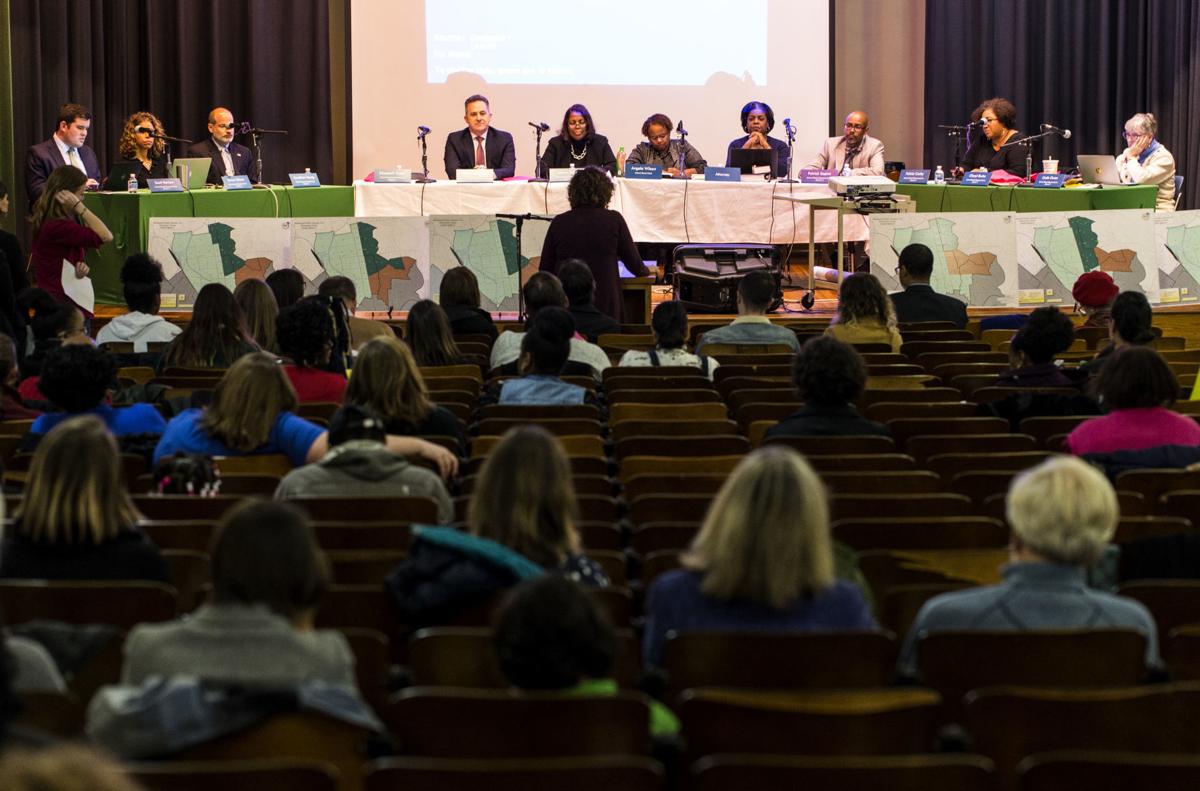 Richmond School Board members and other officials listened to a participant during a North Side rezoning meeting at Ginter Park Elementary School in Richmond on Monday, Dec. 16, 2019. 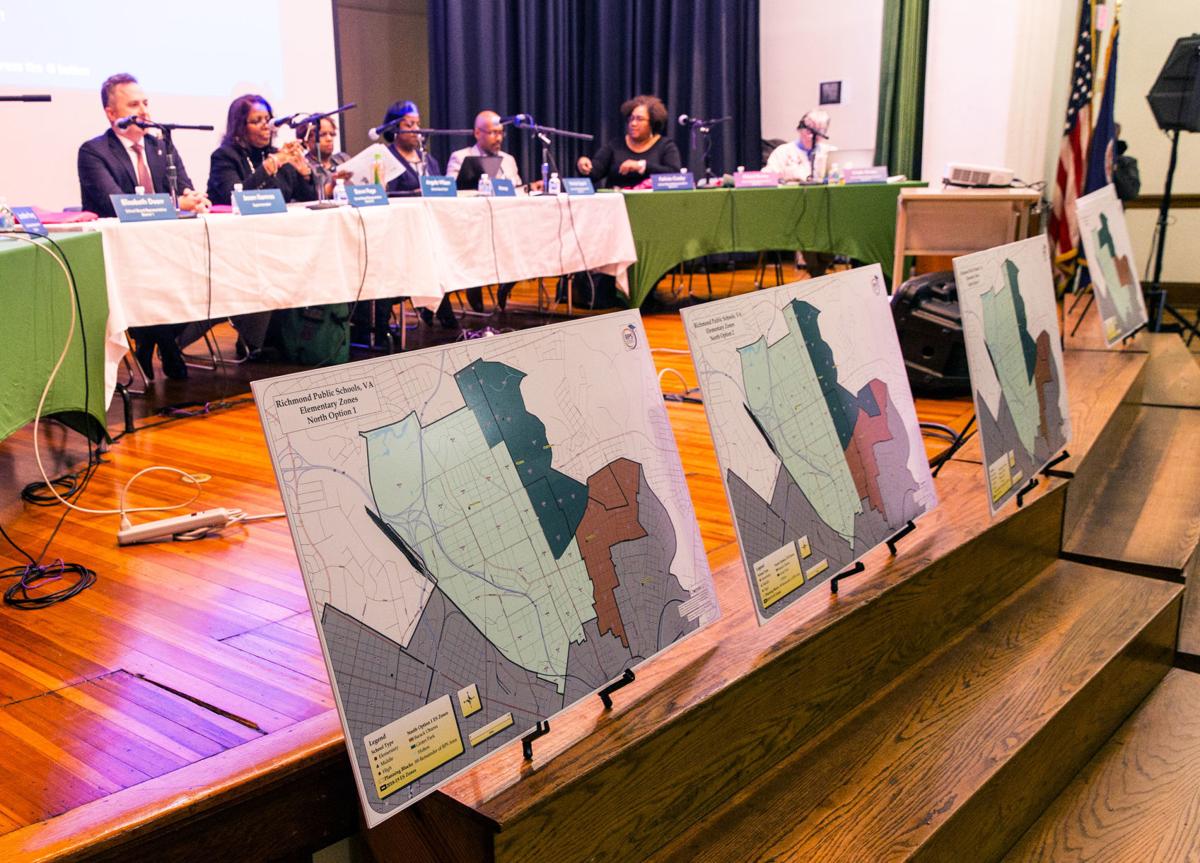 Maps of rezoning proposals were displayed during a meeting at Ginter Park Elementary on Dec. 16. New lines approved by the board last month do not include “school pairing.” 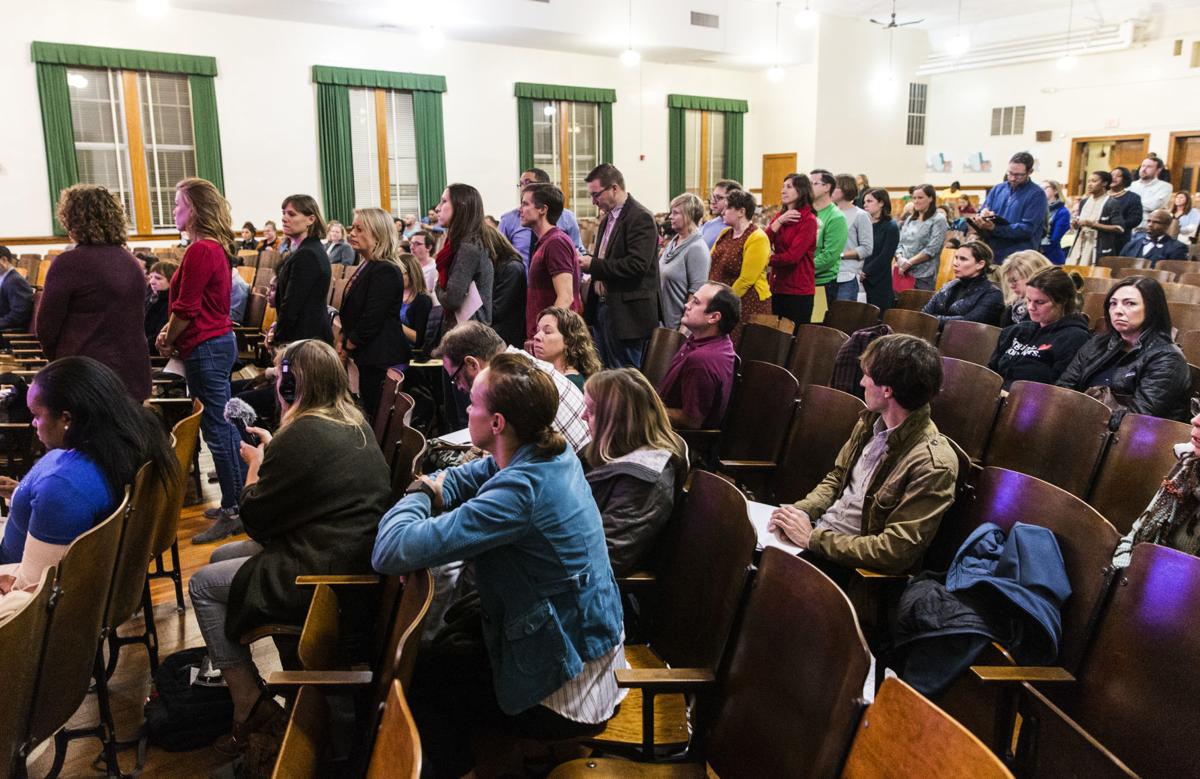 Participants lined up to speak Monday at a public hearing held at Ginter Park Elementary School on North Side rezoning proposals. Richmond School Board members voted against a plan for new North Side attendance zones.

Participants held signs reading “Better Together” during a North Side rezoning meeting at Ginter Park Elementary School in Richmond on Monday.

During a meeting at Ginter Park Elementary School on Monday night about Richmond school rezoning, some attendees held signs saying “We are Ginter Park.”

Richmond School Board members and other officials listened to a participant during a North Side rezoning meeting at Ginter Park Elementary School in Richmond on Monday, Dec. 16, 2019.

Maps of rezoning proposals were displayed during a meeting at Ginter Park Elementary on Dec. 16. New lines approved by the board last month do not include “school pairing.”

Participants lined up to speak Monday at a public hearing held at Ginter Park Elementary School on North Side rezoning proposals. Richmond School Board members voted against a plan for new North Side attendance zones.

Richmond School Board members who sidestepped their last chance to help integrate schools in the city’s North Side during this round of rezoning faced frustrated parents holding bright yellow signs:

The people holding them stayed at Ginter Park Elementary even after the decision was made Monday night, wondering what comes next after six months of debate that went out with a whimper.

North Side families, like the board itself, were divided Monday on school pairing — an option that would merge attendance zones to bring families from affluent and low-income areas together — but united in their hopes for a stronger public school system.

Now, they’re wondering how to get there.

“I hope that everyone who fervently attended these meetings will come together and advocate for proper funding of all of our schools,” said Sabrina Gross, president of the Parent Teacher Association at Barack Obama Elementary School. “I know I will.”

The rezoning process launched in February was billed as a comprehensive citywide undertaking that should, among other things, alleviate overcrowding and improve diversity across a district where 3 in 4 schools are what researchers define as “intensely segregated,” meaning less than 10% of a school’s student body is white.

Gross supported pairing Obama with Holton and Ginter Park elementaries, but said other Obama parents didn’t trust that it was the right option.

The plan was among 10 options before the board Monday. Gross said she was confused about why the board didn’t consider more of them in what was its final meeting of a months-long process.

Instead, the School Board rejected a motion from the North Side’s representative, Kenya Gibson, with a 6-3 vote to redraw some boundaries in the Ginter Park neighborhood and moved on after no other motions were made, leaving North Side boundaries intact.

“It was a huge disappointment. As someone who has watched the process since the early days, I am confused that no board member was prepared to make a motion on a plan that had been properly vetted,” said Shannon Lindbloom, a pairing supporter who held a yellow sign. “So by default, they endorsed the status quo. They shirked their responsibility to provide capacity relief, rightsize schools and increase diversity of all kinds. It was shameful.”

Gibson’s motion would have sent 159 students in the Holton zone east of Brook Road, north of Brookland Park Boulevard and north of Ladies Mile Road to Ginter Park, essentially putting the Ginter Park neighborhood into the elementary school zone bearing its name.

Barack Obama Elementary would have received 90 Ginter Park students south of Laburnum Avenue and north of Ladies Mile Road, while Obama students living south of Brookland Park Boulevard would be rezoned for Holton.

That plan would have left the percentage of low-income students essentially the same at Obama, while decreasing for Ginter Park (80% to 70%) and increasing slightly for Holton (38% to 40%), according to data from Cropper GIS, the board’s rezoning consultant.

“Our zones show significant gerrymandering,” Gibson said. “This approach would keep communities together.”

The board earlier this month rezoned about 1,500 students across elementary, middle and high schools (final numbers have not been published). The biggest political change comes in the reversal of a 2013 decision that shifted Museum District students to William Fox Elementary from John B. Cary Elementary, which made Fox whiter and Cary less diverse.

In other parts of the city, new boundaries were drawn to fill a rebuilt, 1,000-student E.S.H. Greene Elementary; a rebuilt, 750-student George Mason Elementary; and a new, 1,500-student middle school on Hull Street Road. George W. Carver Elementary and Bellevue Elementary have also been tapped to be become magnet schools.

Mary Munford’s school zone, the whitest and most affluent in the city, is staying the same. So are those in the North Side.

“Rezoning is never an easy process,” Gibson said. “This is especially true when we are called to have frank discussions about race and poverty in a city with a marked history of segregation, and in a school system that has struggled to earn trust.”

Gibson’s proposal was made public a week before the vote while others, including pairing, had been recommended by a special committee on rezoning last month.

Board members who opposed the plan cited concerns over how late it was made public and the lack of community input — there was one public hearing, held Monday before the vote, on the new plan.

Superintendent Jason Kamras, a supporter of school pairing, said he was disappointed and apologized for the lengthy debate not yielding results.

“Engagement is a good thing no matter where you fall on these issues. I’m sorry that it didn’t yield any change, but I’m grateful,” he said. “Even though there are certainly high emotions, the conversations we’ve had are important ones and we need to keep having them. This work of pursuing equity is a journey, not a sprint.”

While the board chose not to make changes to the North Side, a group of parents is planning to explore how it can integrate the schools. Gibson said she’d hold a meeting after the school system’s holiday break to discuss the process and how to move forward.

Holton parent Rebecca Richardson, who also supported pairing, said Tuesday that she hopes to help form a committee of North Side community members to “create and submit an integration proposal to [the School Board] that is well-supported by the community at large.”

Richardson said she was disappointed by the board’s decision Monday, but her time wasn’t wasted in the months of rezoning debate.

“In the process of this work, I have stepped out of the bubble that I’ve created for myself and my family more in the past few months than I have in the past decade,” she said. “I have the rezoning process to thank for that.”

Williams: On Monday, RPS parents and board members put their fears first. And so a segregated Richmond remains.

Bethanie Constant, the parent of a student at Linwood Holton Elementary School, lives five doors away from the former North Side home of Olive…

I certainly did not predict this result but I am also not surprised. People purchase homes in desirable school districts for re-sale value, whether they have children or not. Changing school lines would affect those real estate values.

I make no judgment on what the decision should be as it has no effect on me but I understand the politics are much more than many will consider.

Living on NS, speaking to neighbors we know why . Yes it has $$$ value. Can be a tough crowd up here. Wanna buy a house???

These articles are consistently biased and one side, a bit surprising to have this level of dishonesty in the RTD