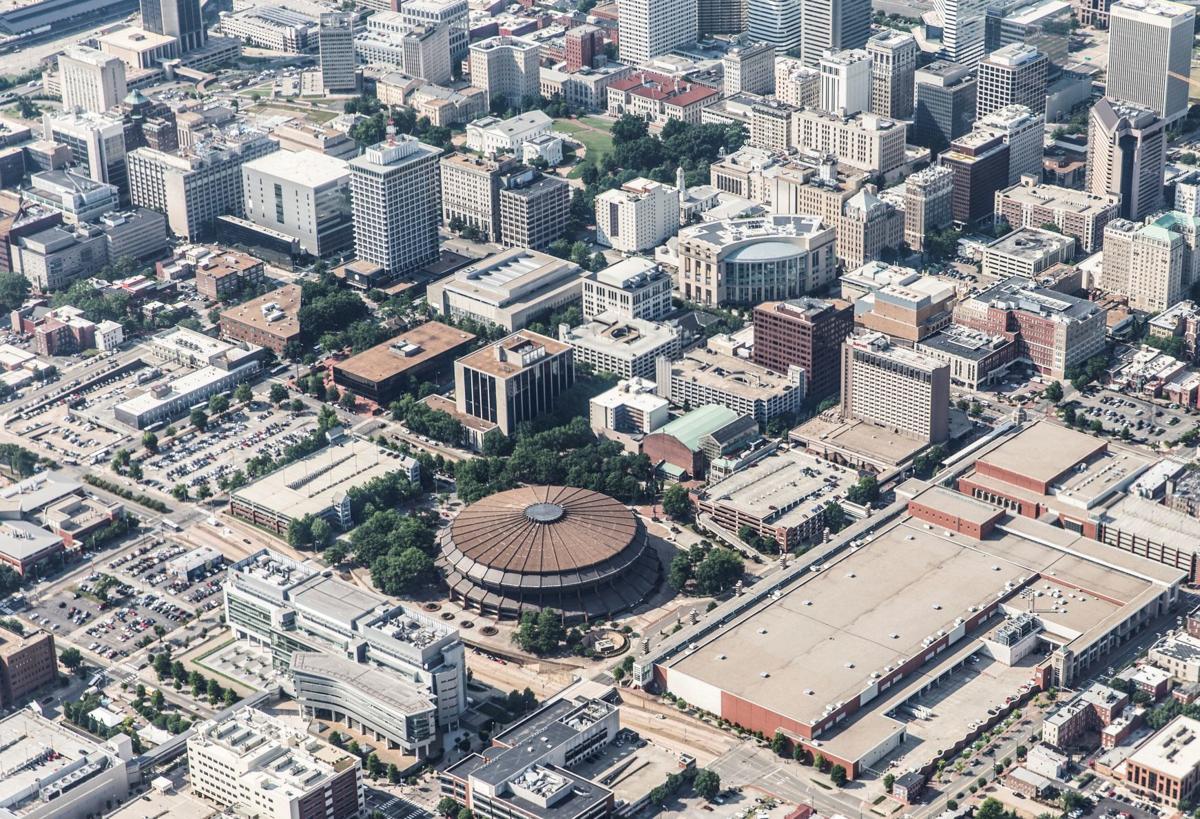 A November 2017 aerial photo showed downtown Richmond, including the Coliseum and the Greater Richmond Convention Center. 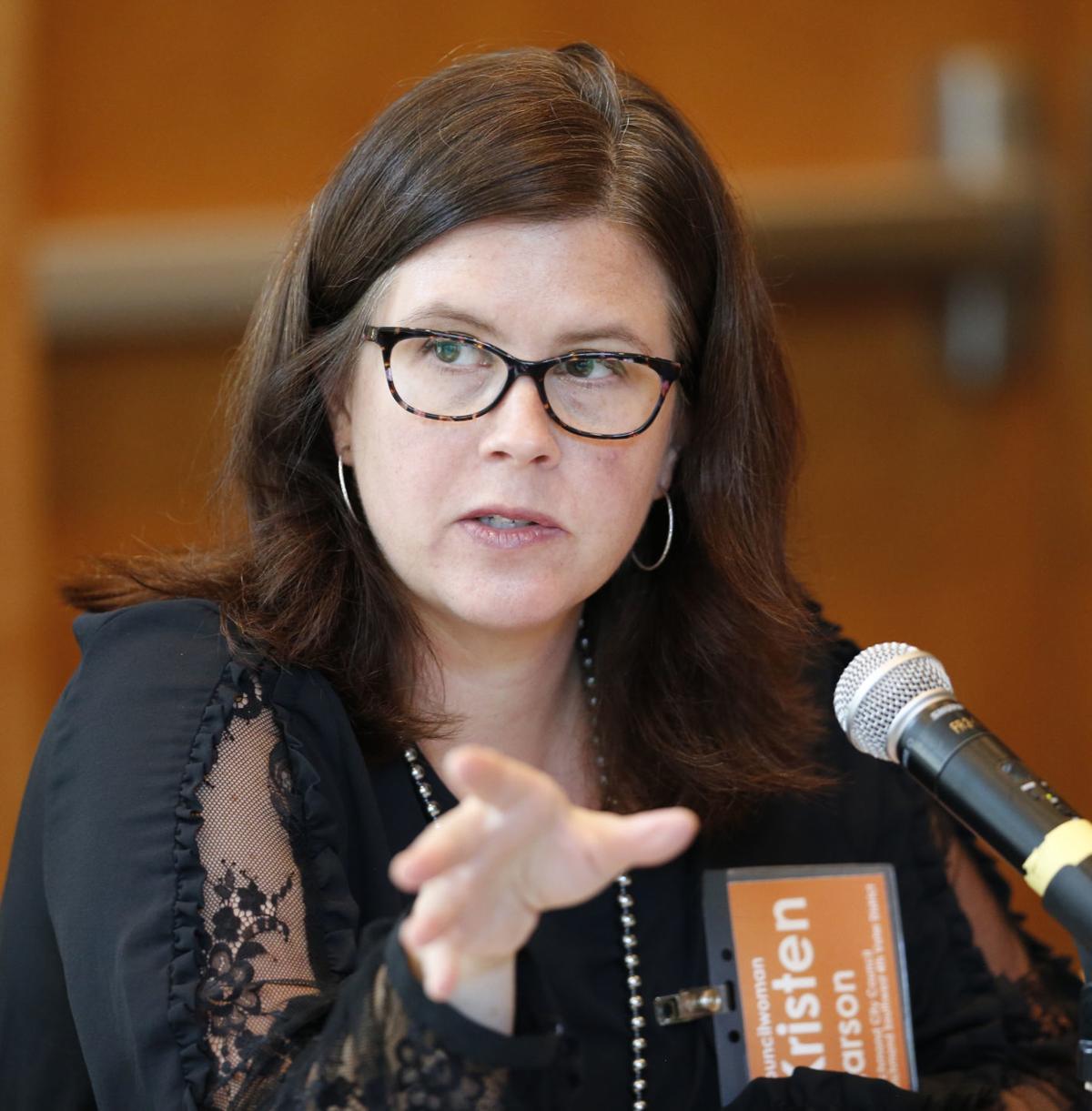 A bloc of Richmond City Council members on Monday sought unsuccessfully to stop the hire of a Chicago-based consultant in line to vet the $1.5 billion Navy Hill economic development plan for downtown.

At issue was a link between that consultant, C.H. Johnson Consulting Inc., and a consultant retained by Mayor Levar Stoney’s administration last year to review the deal, Hunden Strategic Partners. The founder of Hunden Strategic Partners previously worked for C.H. Johnson Consulting from December 2000 to February 2006, according to his LinkedIn page.

Some of the council members said they viewed the link as a conflict of interest, or else called into question whether C.H. Johnson Consulting would provide an impartial analysis if hired.

“The question it raises to me is: Are we just going to get the same analysis that was already given to us?” said Councilwoman Kristen Larson, the 4th District representative, who called the connection "troublesome."

Larson and three other council members sought to stop the hire by canceling the solicitation in advance of the city formally entering into an agreement with the firm next week. Also advocating for that course of action were Councilwoman Kimberly Gray, who represents the 2nd District; Council Vice President Chris Hilbert, of the 3rd District; and Councilwoman Reva Trammell, the 8th District representative.

A majority of council members said they did not view the matter as an issue.

“If it were last year, sure, that’s a different situation,” said Councilman Andreas Addison, who represents the 1st District. “Thirteen years ago, for me, doesn’t raise a red flag that they’re able to do an unbiased look that we’ve asked of them.”

Monday's discussion was the latest spat stemming from the controversial project since it hit the council docket in September.

Behind the proposal is NH District Corp., a development group led by Dominion Energy CEO Thomas F. Farrell II. The group’s plans call for a 17,500-seat arena that would replace the Richmond Coliseum; more than 2,000 apartments and condominiums; a high-rise hotel; 1 million square feet of commercial and office space; 260,000 square feet of retail and restaurant space; renovation of the historic Blues Armory, a new transfer plaza for GRTC Transit System bus riders; and infrastructure improvements.

Hunden — the mayor’s consultant — issued a report last year that painted a rosy picture of the proposal’s potential financial benefits to the city. Hunden's analysis was completed before the Stoney administration finished negotiating the terms of the deal or publicly released details about the project.

Council members said at the time that they wanted to hire their own consultant to conduct a separate review. The council set aside $190,000 to hire its own firm this year.

The city’s Department of Procurement Services issued a solicitation in September. It closed in October. Late last month, a public notice posted on the city’s website indicated that the council was poised to hire C.H. Johnson Consulting.

The department conducted reference checks for firms that responded to the solicitation, Burrell said. She declined to answer questions from council members about whether the connection between C.H. Johnson Consulting and Hunden was discovered in the review process.

“I have not determined as the director that there is a conflict,” Burrell said.

City Attorney Haskell C. Brown III said the link did not constitute a conflict of interest under state procurement law or city policy.

“Everyone has worked somewhere at some point before their current employment,” Brown said.

C.H. Johnson Consulting also worked as a consultant for the Greater Richmond Convention Center Authority as it prepared for a $165 million expansion back in 1999.

The Richmond Free Press first reported the Hunden connection, as well as the firm's past work for the convention center. The latter did not come up in the council’s discussion Monday.

The Richmond City Council on Monday unanimously passed a measure banning the use of hand-held devices while driving within the city limits.

This is such a bad idea. And it keeps getting worse.