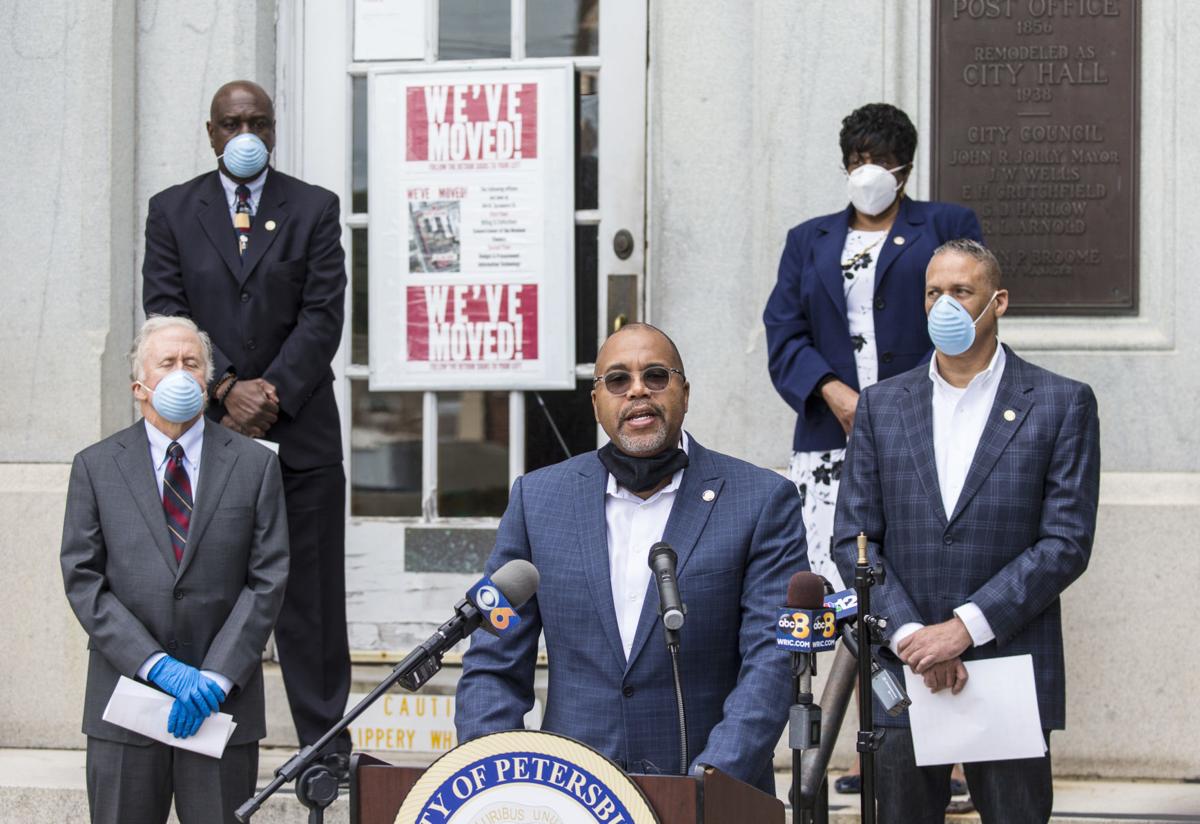 Petersburg Mayor Samuel Parham (center) responded Wednesday to what he called “a political ploy” to pressure the city into restoring water during the pandemic. 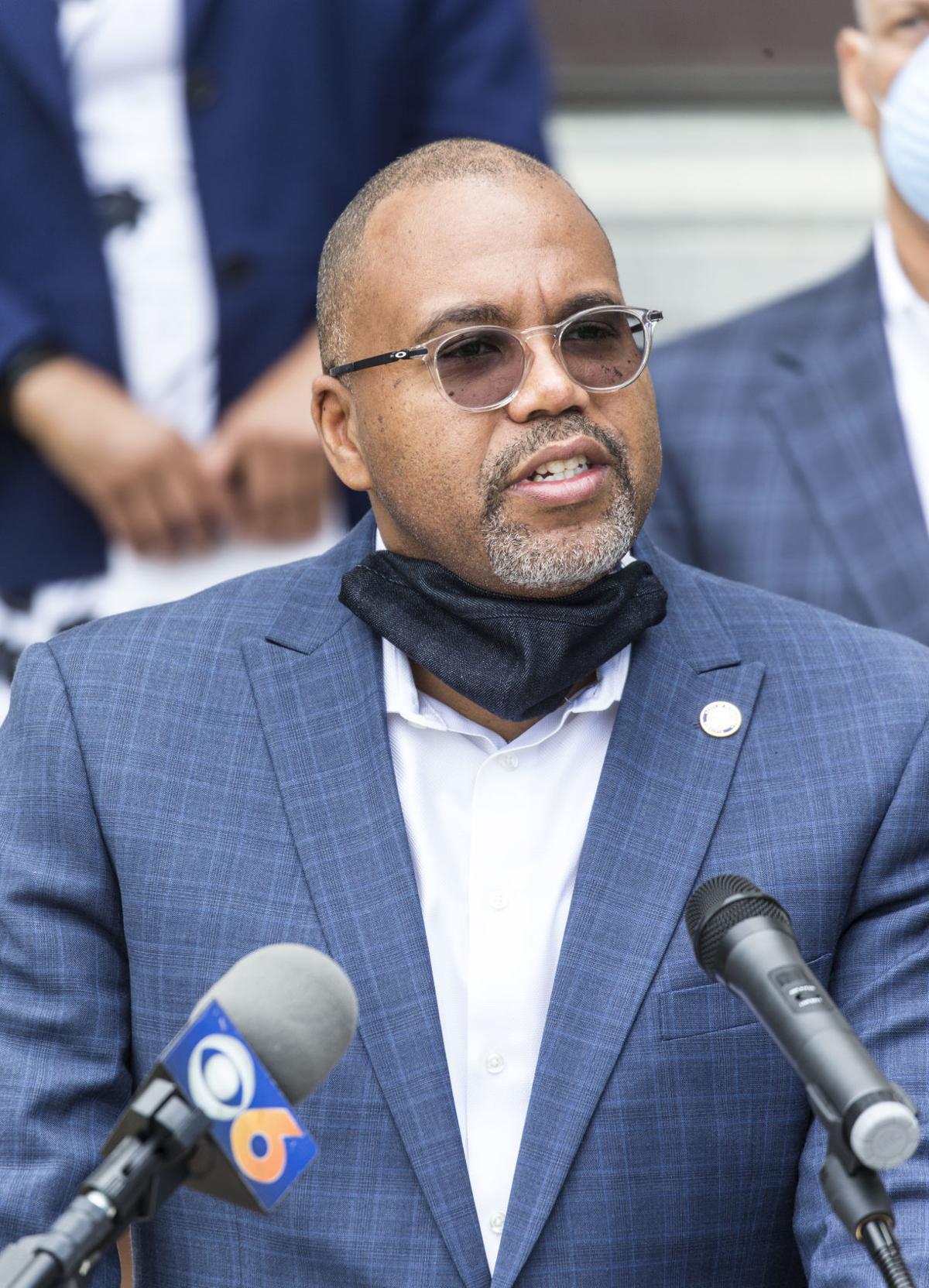 Petersburg Mayor Samuel Parham responds to the "allegations" about water service issues during a press conference in front of Petersburg City Hall on Wednesday, May 13, 2020. 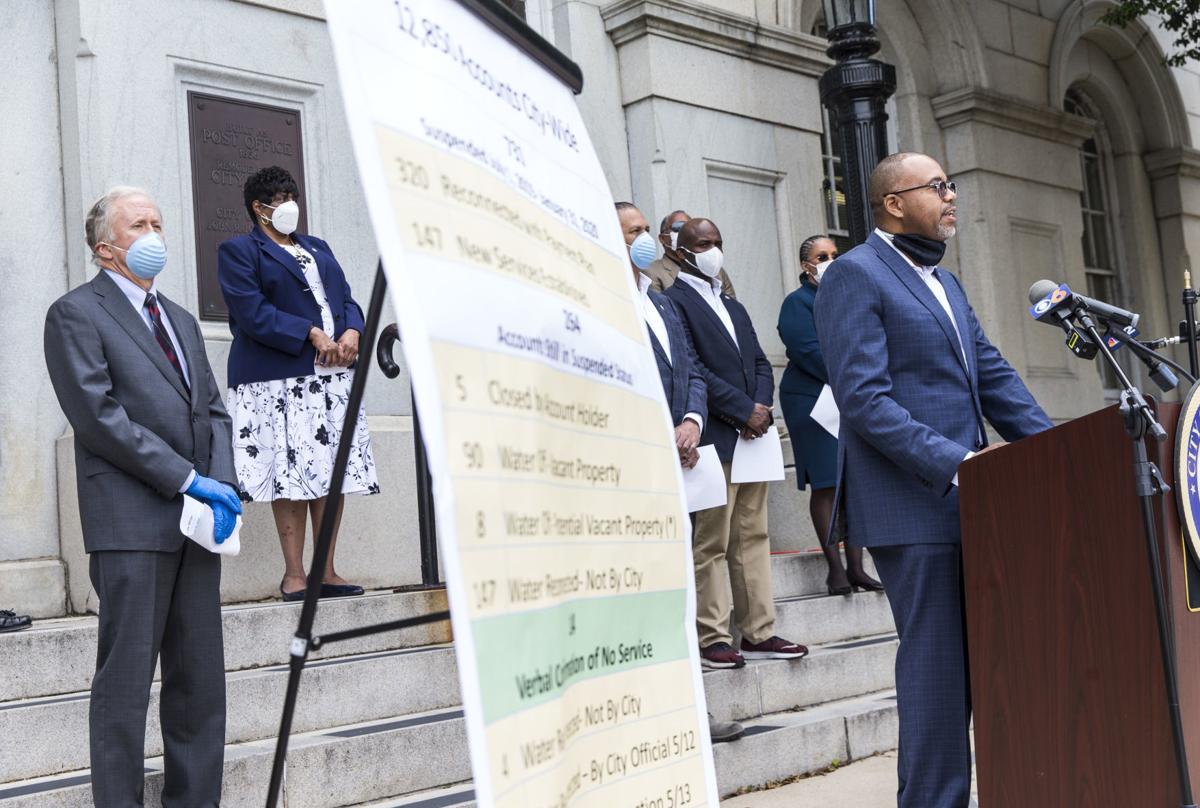 Petersburg Mayor Sam Parham spoke during a news conference in May about city water service disconnections for nonpayment, the pandemic and the state’s call for reconnection. 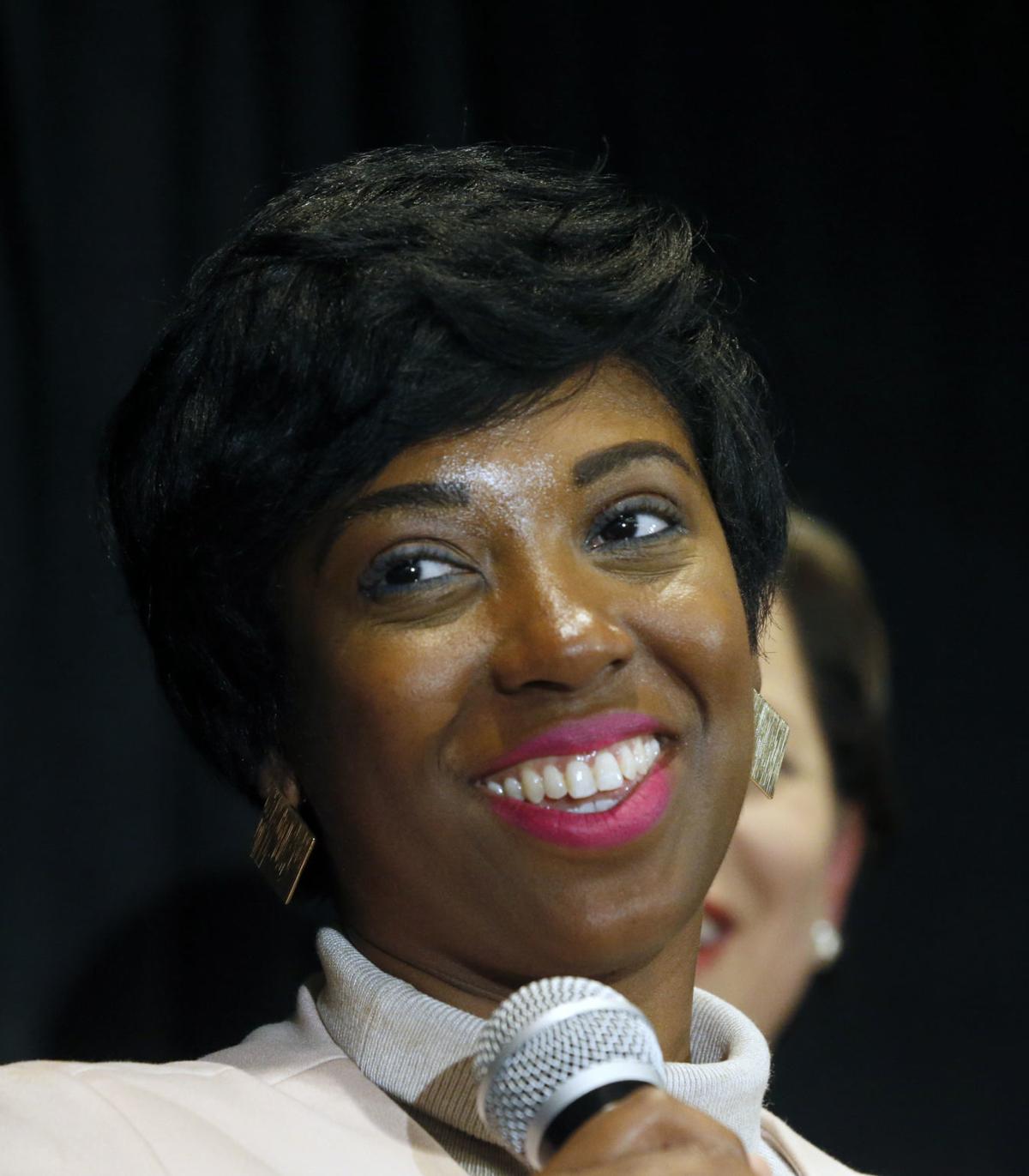 Petersburg Mayor Samuel Parham (center) responded Wednesday to what he called “a political ploy” to pressure the city into restoring water during the pandemic.

Petersburg Mayor Samuel Parham responds to the "allegations" about water service issues during a press conference in front of Petersburg City Hall on Wednesday, May 13, 2020.

Petersburg Mayor Sam Parham spoke during a news conference in May about city water service disconnections for nonpayment, the pandemic and the state’s call for reconnection.

Petersburg’s mayor on Wednesday called a state order to restore water to households whose faucets had run dry for months “a political ploy.”

The pushback came during a news conference on the steps of City Hall that Petersburg leaders called to announce they’d restored service to five households, five days after Gov. Ralph Northam shamed the city as endangering public health during the coronavirus pandemic.

At the request of Del. Lashrecse Aird, Petersburg last week identified 46 households without service. The City Council then voted 6-1 against turning the taps back on, citing the cost, prompting a rebuke from Northam and a directive from state Health Commissioner Norman Oliver on Sunday to restore service through the duration of COVID-19.

“Del. Aird took a complaint from one constituent and ran with it to the governor’s office to get an order specifically to discriminate against the city of Petersburg and our efforts,” Mayor Samuel Parham said.

“The problem with the order that was issued is we were in the midst of addressing this issue and unfortunately it took the focus away from our efforts,” Ferrell-Benavides said.

Oliver is slated to meet with Petersburg officials later this week. Parham said the city requested to have a similar meeting with Northam.

City officials last week surveyed 264 potential homes that might have lacked service, and were among 731 accounts Petersburg cut off between July 2019 and Jan. 31.

Parham on Wednesday announced $90,000 from the Dominion Charitable Foundation and $5,000 from Meridian Waste had been pledged to help residents behind on bills with initial payments.

Aird helped secure the grants, according to a letter the delegate sent Ferrell-Benavides at 8:30 a.m. Wednesday. With assistance from Pathways-VA Inc., the money is going to accounts that were disconnected before the health emergency and have remained off since.

“I worry deeply about families during this pandemic and well after which is why I am excited that this money will be available to support families in need now and into the future,” Aird, D-Petersburg, said Wednesday.

Parham stressed Wednesday that the disconnection of residents’ water occurred before the pandemic.

“I hope she will from now on before running to the governor screaming that the city is a big bad wolf, that she [Aird] would come and meet with us and see we are being good stewards. … We are taking care of our citizens the way we signed up to do here,” Parham said.

Of the 264 households initially in question, 147 were reconnected to water “by their own creative means”; 90 were vacant; an additional eight might have been vacant; five accounts were closed; and 14 households had no service, Parham said.

A city spokeswoman last week said Petersburg would investigate and seek prosecution of anyone who had turned the water back on “illegally.”

Councilwoman Treska Wilson-Smith, who cast the sole vote to turn the water back on, did not attend Wednesday’s news conference. She was the only council member not present.

“I do not agree with attacking the governor … we cannot blame others. The letter from the commissioner came after [the city] council voted to not turn water back on,” Wilson-Smith said in an interview.

Parham, who called Wilson-Smith’s attempt to establish an amnesty program “an act of socialism,” said Wednesday, “My statement is still we cannot give away water services in the city of Petersburg. We do not have the resources to give free water away. We have a crumbling infrastructure.”

Collections have been a constant problem for the city. Petersburg still is recovering from near-economic collapse four years ago after the flawed rollout of a new utility billing system interrupted the collection of city revenues.

“City officials took a cautious approach to re-addressing the services for our residents who were disconnected … as this city has been plagued by fiscal challenges dated back to our financial collapse in 2016, the hasty actions of reconnecting without proper investigation and analysis would simply have been irresponsible,” Parham said.

The cost of unpaid city water bills has ballooned to about $3.9 million, Ferrell-Benavides said.

3.9 million is a lot for Petersburg to be in debt for on the water and just ignoring the non-payments cannot continue to be ignored. Perhaps if these people who don't pay their water bills give up their cigarettes & beer habits then they could pay toward their debt.

What message does this send to those people who always manage to pay their bill on time ?

Quite sure there was a reimbursement mechanism.