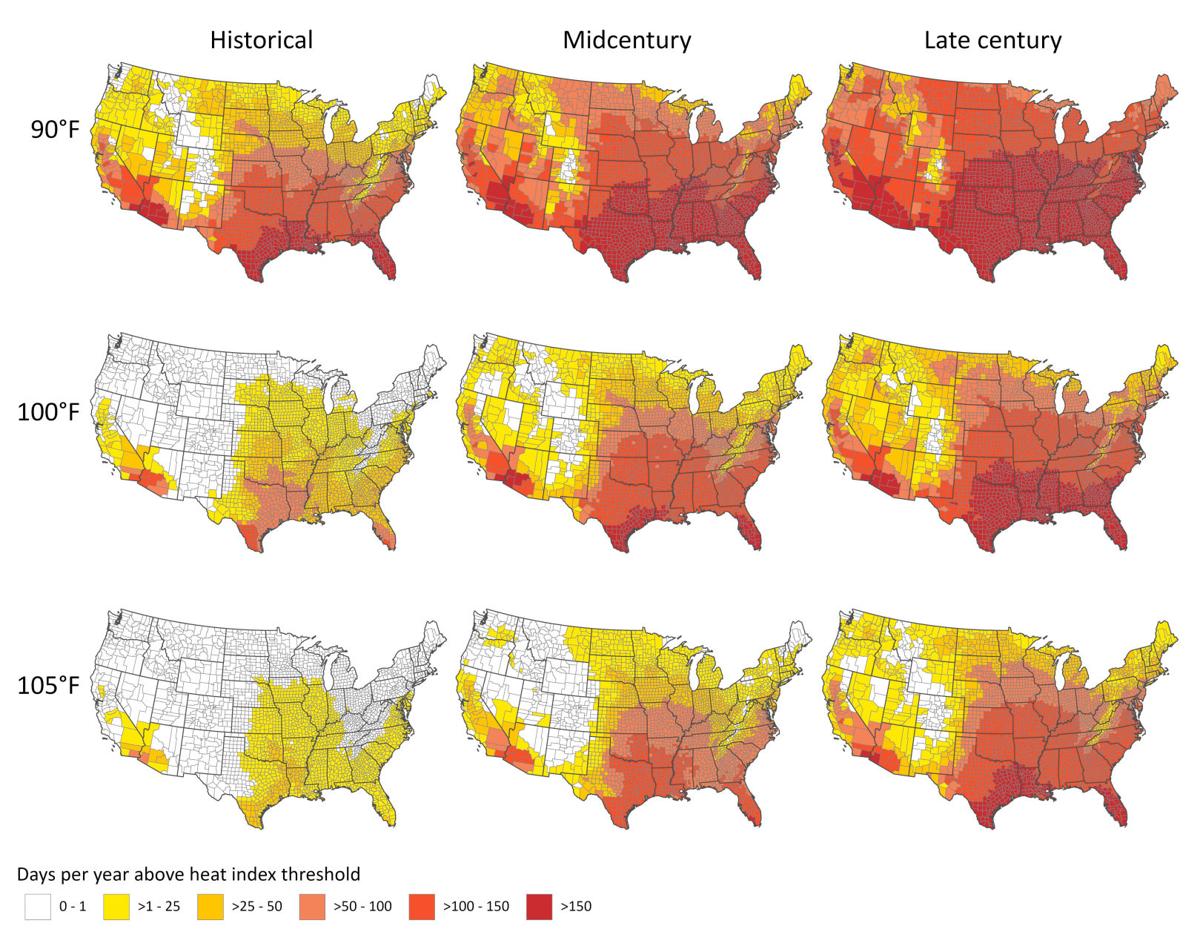 The Union of Concerned Scientists published a study last summer looking at how climate change will affect the timing and distribution of extreme heat waves in the continental United States. The left column shows the historical average number of days with a heat index above 90 degrees (top row), 100 degrees (middle row) and 105 degrees (bottom row). The middle column shows the same for mid-century if nothing is done to reduce carbon emissions, and right column shows the same by the end of the century if nothing is done. Note that Virginia High School League guidelines recommend restricted outdoor activity above 90 and none above 105. 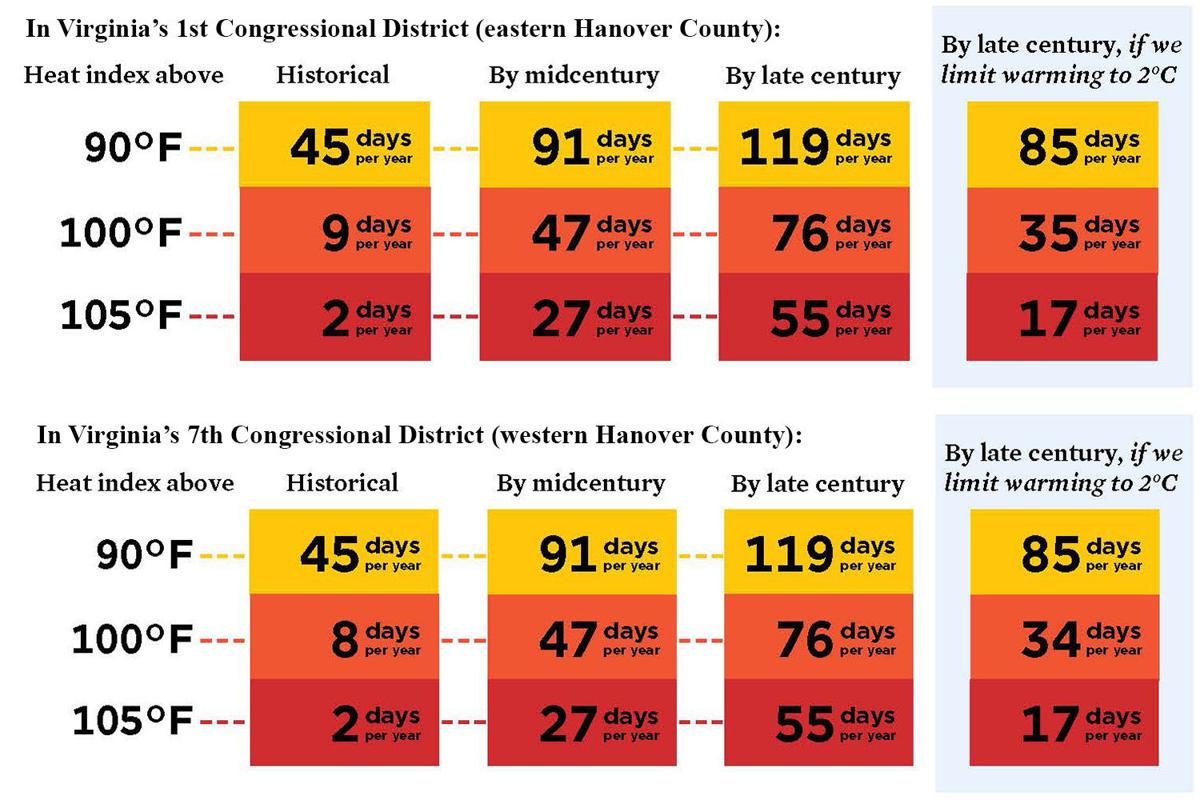 The Union of Concerned Scientists published a study last summer looking at how climate change will affect the timing and distribution of extreme heat waves in the continental United States. The left column shows the historical average number of days with a heat index above 90 degrees (top row), 100 degrees (middle row) and 105 degrees (bottom row). The middle column shows the same for mid-century if nothing is done to reduce carbon emissions, and right column shows the same by the end of the century if nothing is done. Note that Virginia High School League guidelines recommend restricted outdoor activity above 90 and none above 105.

MECHANICSVILLE – The Richmond metropolitan area is all too familiar with stories of athletes felled by heat injuries during practices or competition. Despite great strides in understanding many of the risk factors and how to manage them, athletes continue to sicken, even die, from overdoing it in the heat.

Most of the Deadly Practice series so far has focused on conditioning and fitness screening to identify athletes at risk of heat injuries. But so far, the nation has done little to grapple with what may be the single biggest threat to outdoor athletes in the coming decades: climate change.

While the topic may be off-putting to some, the science is clear: the planet is warming and we are the main cause of that warming because of our fossil fuel emissions, destruction of natural ecosystems and other activities.

Climate change will affect many aspects of our lives in the future, but it may have one of its biggest impacts on when and how we choose to enjoy ourselves outdoors. Those who enjoy outdoor sports may have to make significant adjustments to adapt to the hotter temperatures to come.

This past summer, the Union of Concerned Scientists published a report – both as a peer-reviewed study in a research journal as well as an expanded version on its website – on how extreme heat will affect the United States in the coming century. The research team, led by Kristina Dahl and Rachel Licker, looked particularly at the heat index.

What they found, is that extreme heat will affect more and more of the country more frequently than it has in the past.

“We found that if we fail to reduce our carbon emissions, that there will be expansion of dangerous heat across the country,” Dahl said. “Athletes are particularly at risk.”

The trend has already begun.

“The hottest day of the year is typically sometime near the third or the fourth week of July,” said Jeremy Hoffman, climate science specialist at the Science Museum of Virginia. “The days that are very hot have kind of fattened out into earlier and earlier parts of the spring and even into the fall.

“Even though the warmest day might be going on, traditionally, sometime in late July, the likelihood of seeing a very hot day outside of that time has gotten higher.”

John Boyer, meteorologist at the Richmond Times-Dispatch, had another way of looking at how the climate will change.

“Another way of thinking about it is Richmond potentially having a summer climate more like eastern Texas,” he said.

By mid-century – just a generation of grandkids away – we will be seeing more than 76 days per year with a heat index above 90 degrees, nearly ten times the historical average of nine days per year above 90.

By the end of the century, that could pretty much prohibit any outdoor practice – or play – for much of the month of August when most fall sports begin practice. It could wreak havoc on the traditional summer season for sports like Little League baseball and softball.

Dahl notes that athletes and the military are particularly at risk of heat injury.

Climate changes are already wreaking havoc with athletics. A heat wave in Europe affected the Women’s World Cup soccer tournament. In the World Athletic Championships in Doha, Qatar, in September, organizers schedule the marathon at night; Still, quite a few got seriously ill because of the heat even during what was supposed to be the “cool” part of the day. The headlines from this past year are a worrisome hint of things to come.

“We’re going to have to be more imaginative with how we structure our practice schedules,” Hoffman said. “And it’s going to have a huge impact on what kinds of activities people are willing to participate in during their recreation and tourism.”

I survived the exercising — and even got better!

MECHANICSVILLE – When I began work on the Deadly Practice series, Mike Craven of Mike’s Olym…

Editor’s Note: When I more or less wrapped up the "Deadly Practice" series in October, I was not sure I wanted to raise the issue of climate change and heat injury risk. But I was persuaded to reconsider.

This is part of the final (no kidding) installment in the series.

If you would like to read the Union of Concerned Scientists' report for yourself, go to: Killer Heat in the United States: Climate Choices and the Future of Dangerously Hot Days.

The peer-reviewed research article, which was published in the journal Environmental Research Publications, here: Increased frequency of and population exposure to extreme heat index days in the United States during the 21st century.

The Deadly Practice series is an investigation of heat injuries in sports, which — despite great strides in training practices since the 1970s…