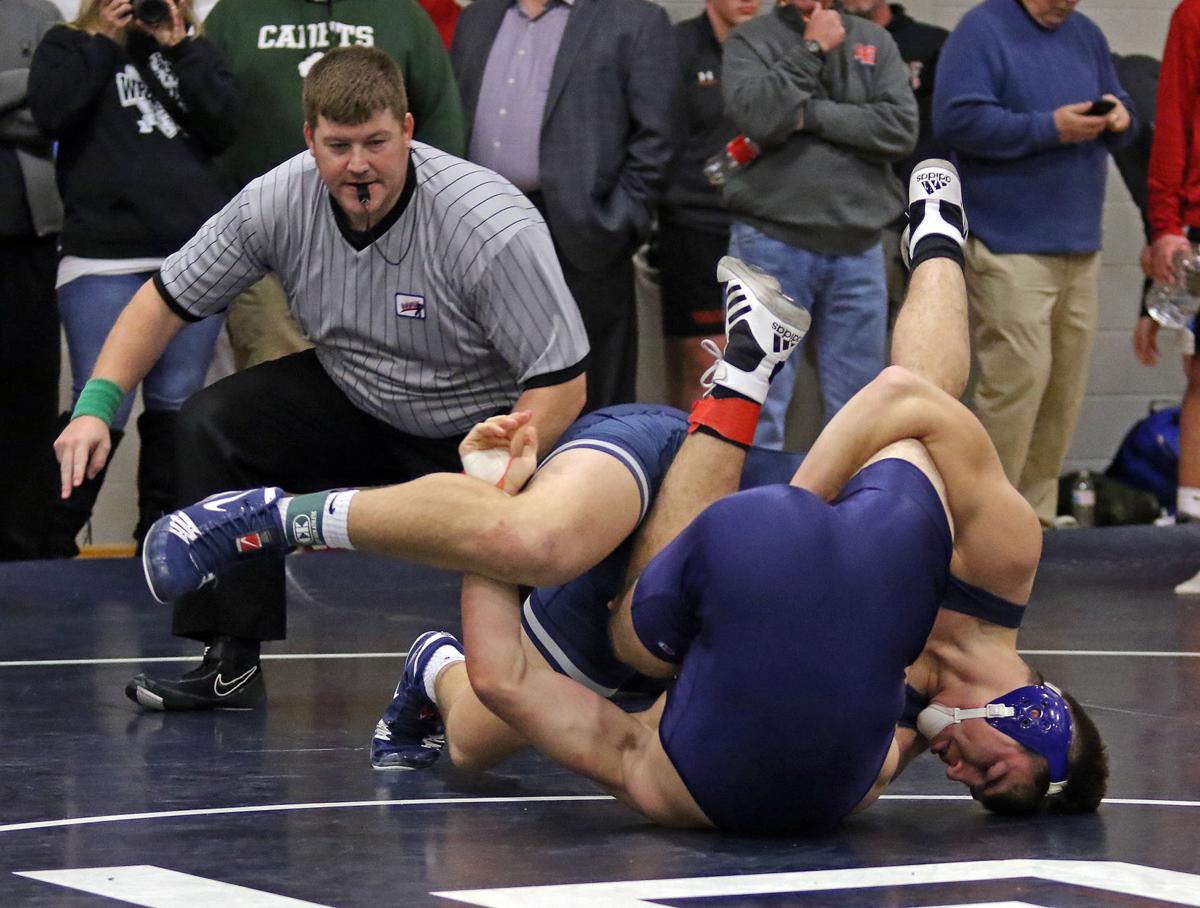 MECHANICSVILLE, Va. -- Lee-Davis’ Andy Aldridge gets his first pin of the weekend against Maury’s Alex Weber in second round of the Lee-Davis Holiday Classic at Lee-Davis High School on Friday, Dec. 14, 2018. 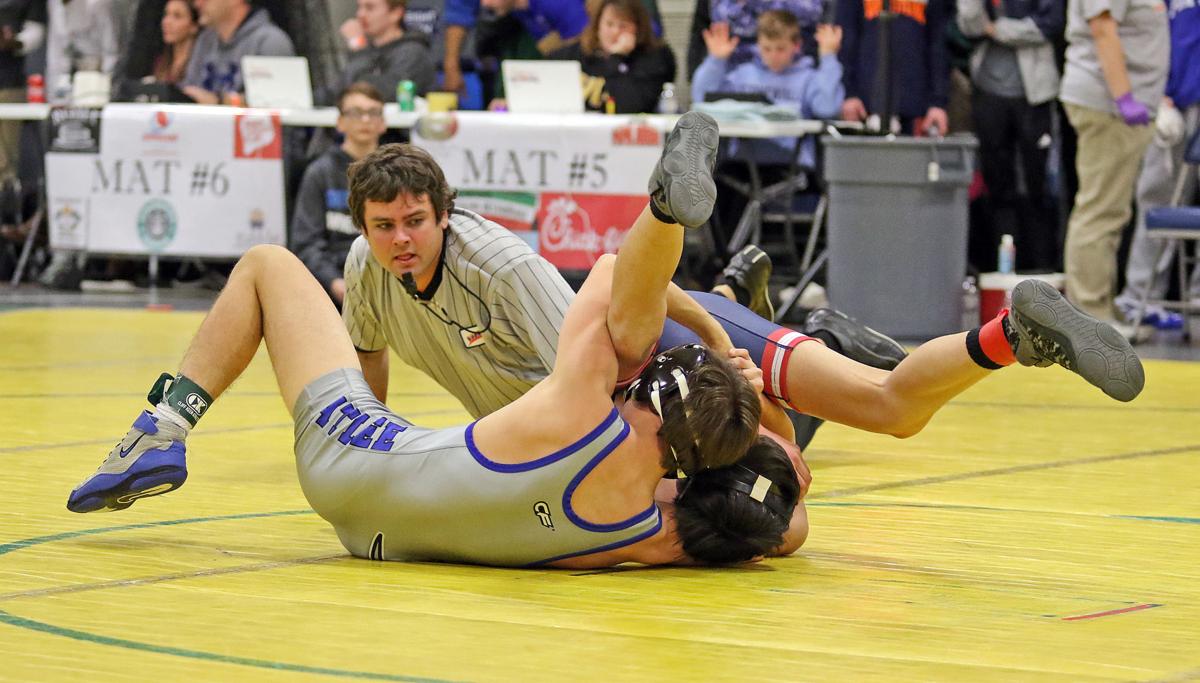 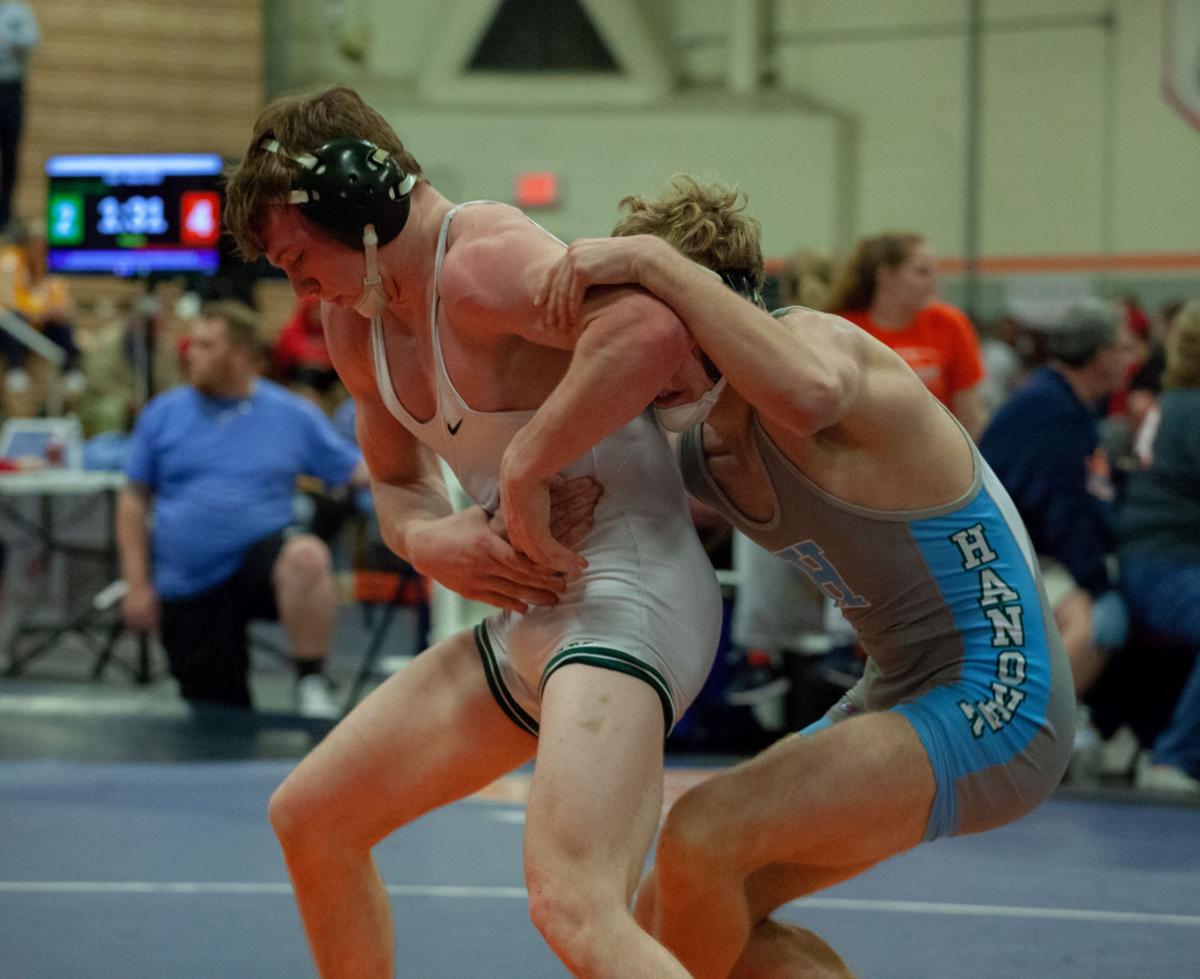 MECHANICSVILLE, Va. -- Benedictine's Riley Vaughan makes good on his escape from Hanover's Tristan Halsey in a 145-pound semifinal match in the Lee-Davis Holiday Classic at Lee-Davis High School on Friday, Dec. 14, 2018. Vaughan won to advance to the championship round with a 6-4 decision. 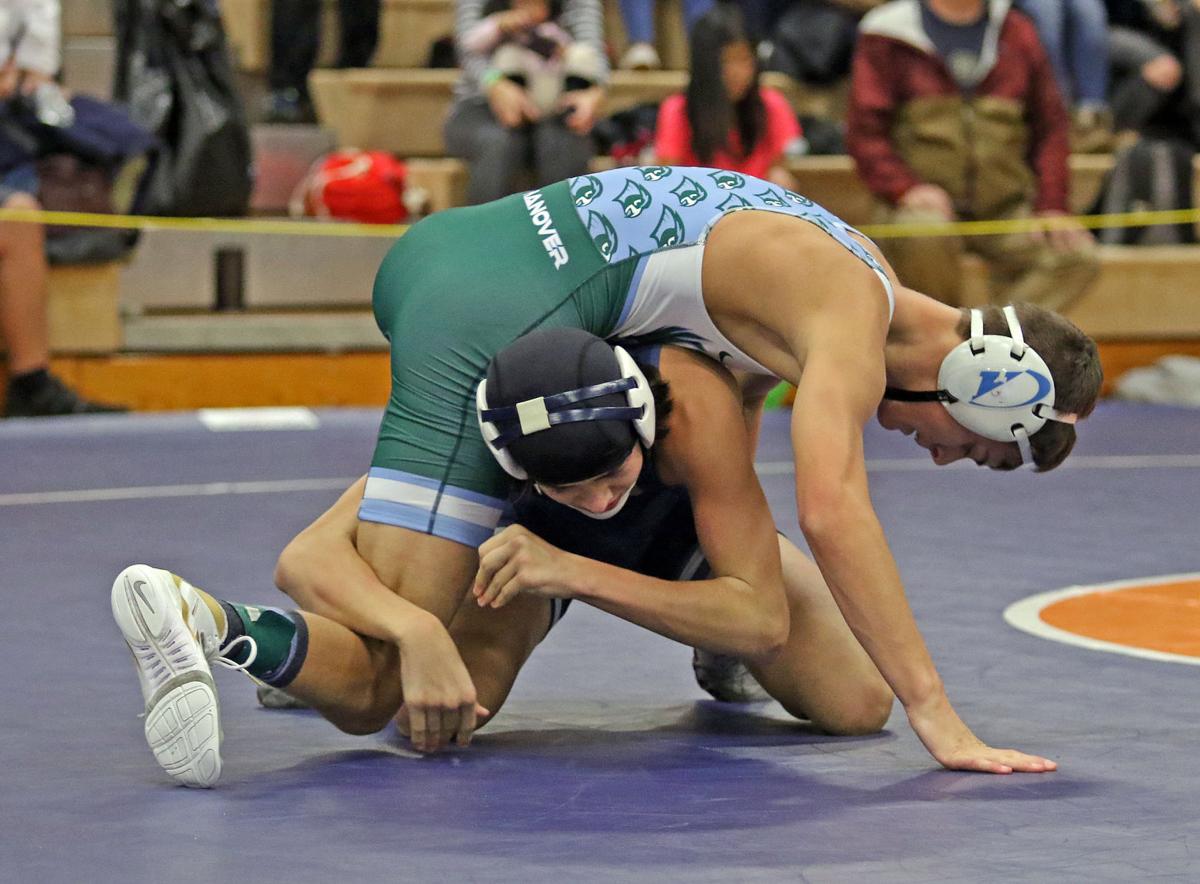 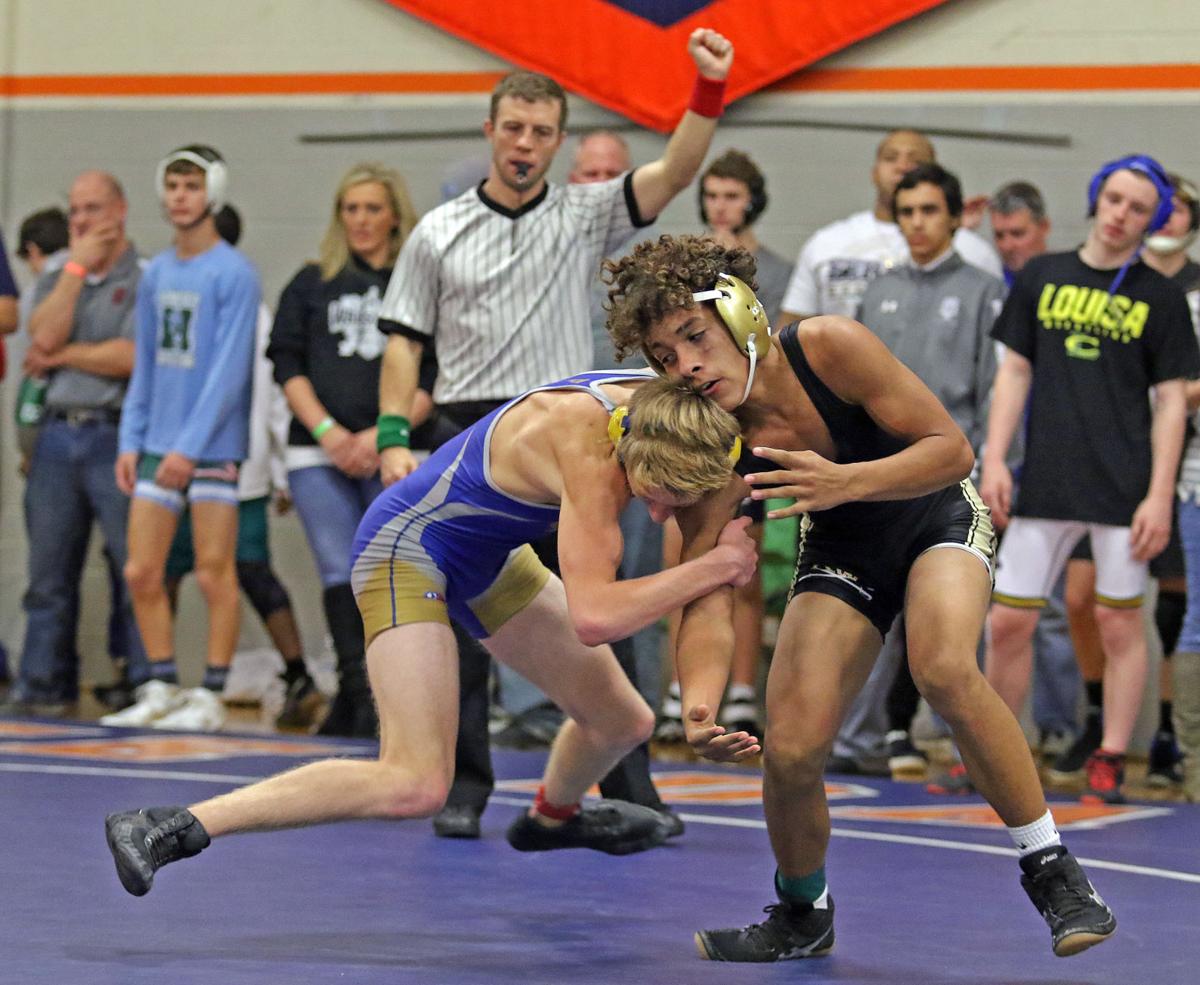 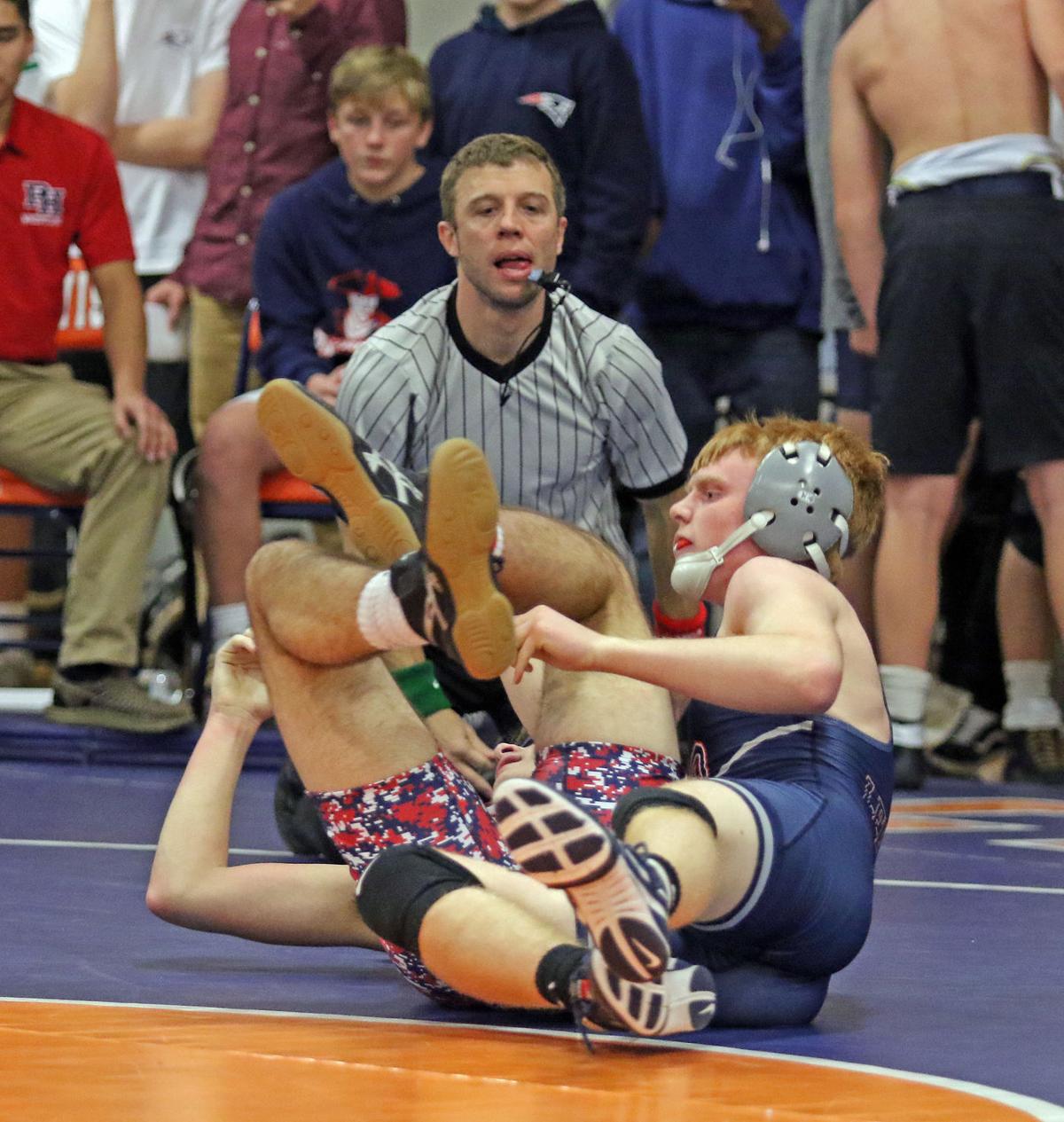 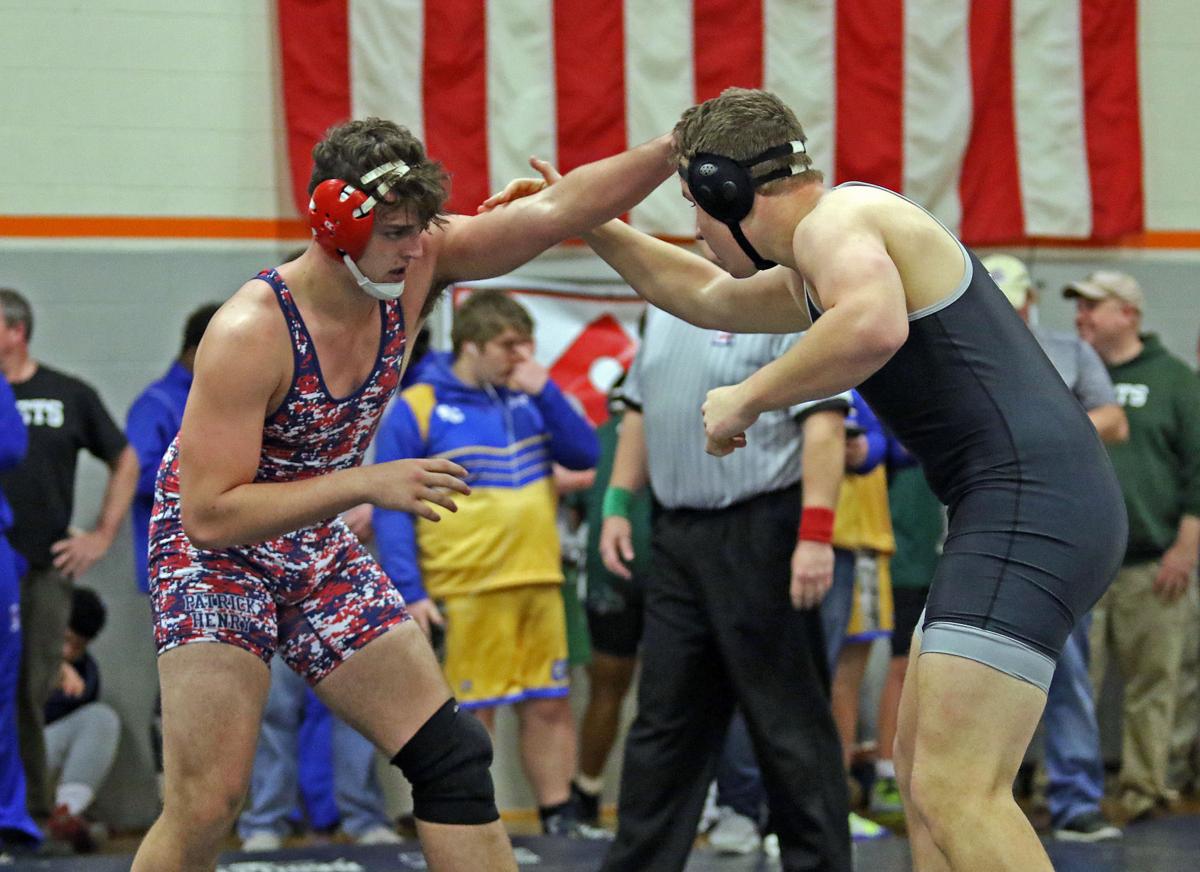 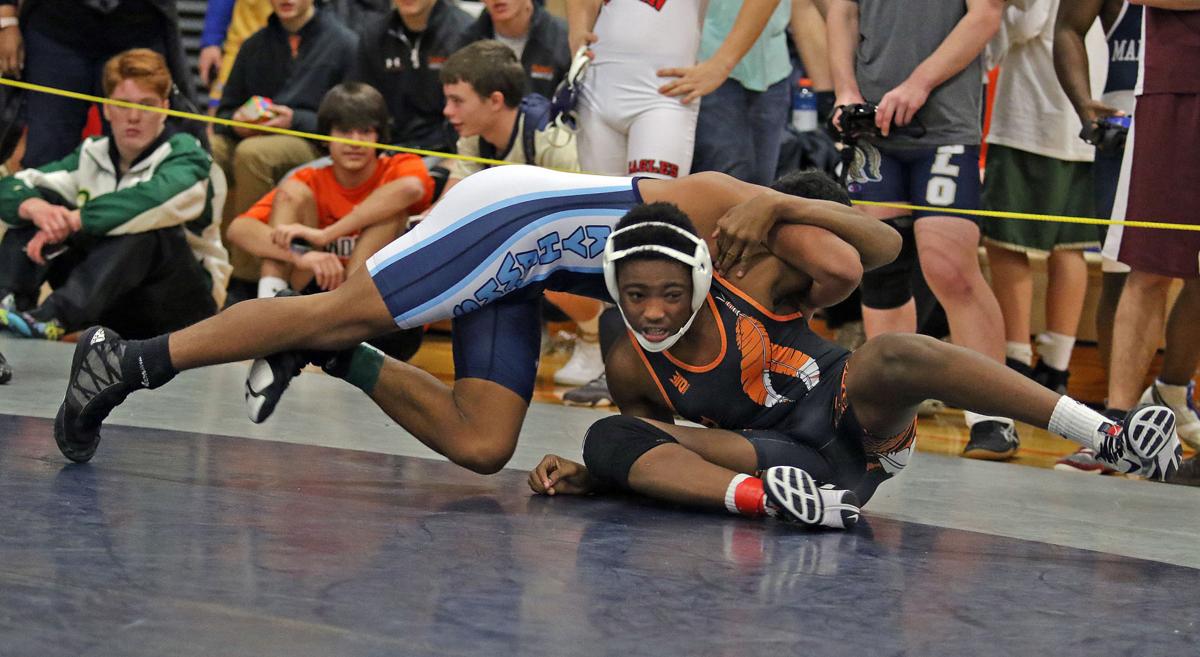 MECHANICSVILLE, Va. -- Lee-Davis’ Andy Aldridge gets his first pin of the weekend against Maury’s Alex Weber in second round of the Lee-Davis Holiday Classic at Lee-Davis High School on Friday, Dec. 14, 2018.

MECHANICSVILLE, Va. -- Benedictine's Riley Vaughan makes good on his escape from Hanover's Tristan Halsey in a 145-pound semifinal match in the Lee-Davis Holiday Classic at Lee-Davis High School on Friday, Dec. 14, 2018. Vaughan won to advance to the championship round with a 6-4 decision.

MECHANICSVILLE – Six area teams finished in the top ten at the Lee-Davis Holiday Wrestling Classic Saturday in Mechanicsville, but it was Sussex Central of Delaware taking home the team title with 258.5 points. Benedictine placed second at 220, while the host Confederates placed fourth at 180 points, producing two champions and one Most Outstanding Performer winner.

In December, while team wins are good and have importance, the focus is more on the development of each individual wrestler, building depth in case of injury, and gaining experience for newcomers. In the case of Liam Harris of Atlee, who placed seventh overall with 134.5, it was an arrival.

Overseas for two years due to his mother’s employment, Harris returned to the United States a year ago, but missed his freshman season due to a back injury. Cleared just a couple of months ago to wrestle this year for the Raiders, the sophomore knocked off second-seeded Noah Loving of Lee-Davis 6-4 in the semifinals before pinning top seed David Steigler of Orange for the 138 pound championship in 2:55.

“I spent a lot of time doing Greco and freestyle, a lot of different types of wrestling,” Harris said of his time in Europe. “I learned a lot there, and here on the sideline, watching every match.”

For Lee-Davis’ Dylan Montgomery, it was another finals appearance at his school’s classic, but one that almost didn’t happen.

Montgomery, runner-up at 160 pounds last year, used technical savvy to consistently score two points at a time, taking down Sam Slate of Benedictine 8-4 to win the 182 pound title. There was a patience about him which immediately reminds you of a lacrosse talent, on offense, waiting for the right moment to attack. The tendencies lend themselves well to the mat.

Teammate Andy Aldridge, named Most Outstanding Wrestler of the Classic along with Harris of Atlee, pinned three opponents on his way to the 195-pound final, an 11-5 win over Michael Wright of Sussex Central. Aldridge won a year ago at 170.

In the final match of the weekend, Benedictine’s Brian Daughtry wowed the remaining crowd, using a move more common at 106 pounds than at his heavyweight level. In a tight third period with James Miller of Warhill, Daughtry used a lightning-fast arm drag to send Miller to the mat, forcing a pin moments later to win the 285 pound title.

“Less than a second,” Daughtry said when asked how long the window of opportunity is to make such a game-changing move. “I don’t know how, but the body just responds.”

Teammate Brenden Barnes grabbed the 113 pound championship by fall in 1:09 over Lance Bass of Colonial Heights, while Riley Vaughan won at 145 pounds with a 5-2 decision over Brandon Greenlee of Sussex Central. C.J. Griffith finished second at 160 pounds while Ryan Tremain was runner-up at 170 for Benedictine.

As for using his finals win moving forward, Daughtry knows where he needs to improve.

“I have to work on the bottom. Getting up, shooting up right from the call of the whistle,” Daughtry said. “Definitely working on the bottom, then working more of my shots.”

Because now, as the regular season grind really gets underway, it’s all about refining your craft to be ready when the postseason arrives.

Powhatan, who placed sixth overall at 142.5, was led by 120 pound titlist J.D. McMillin, who pinned Sussex Central’s Mason Ankrom in just 19 seconds in the title match; and Colby Cheatham, runner-up to Ethan Carpenter of Monacan at 152 pounds.

Hanover placed tenth overall as Will Gaugler took third place at 132 pounds by defeating Cole Jester of Sussex Central by fall at 2:18. His teammate, Tristan Halsey, finished in third place finisher at 145 pounds with a 2-0 decision over Orange’s Nicky Benner.

Rob Witham can be reached at sports@mechlocal.com.