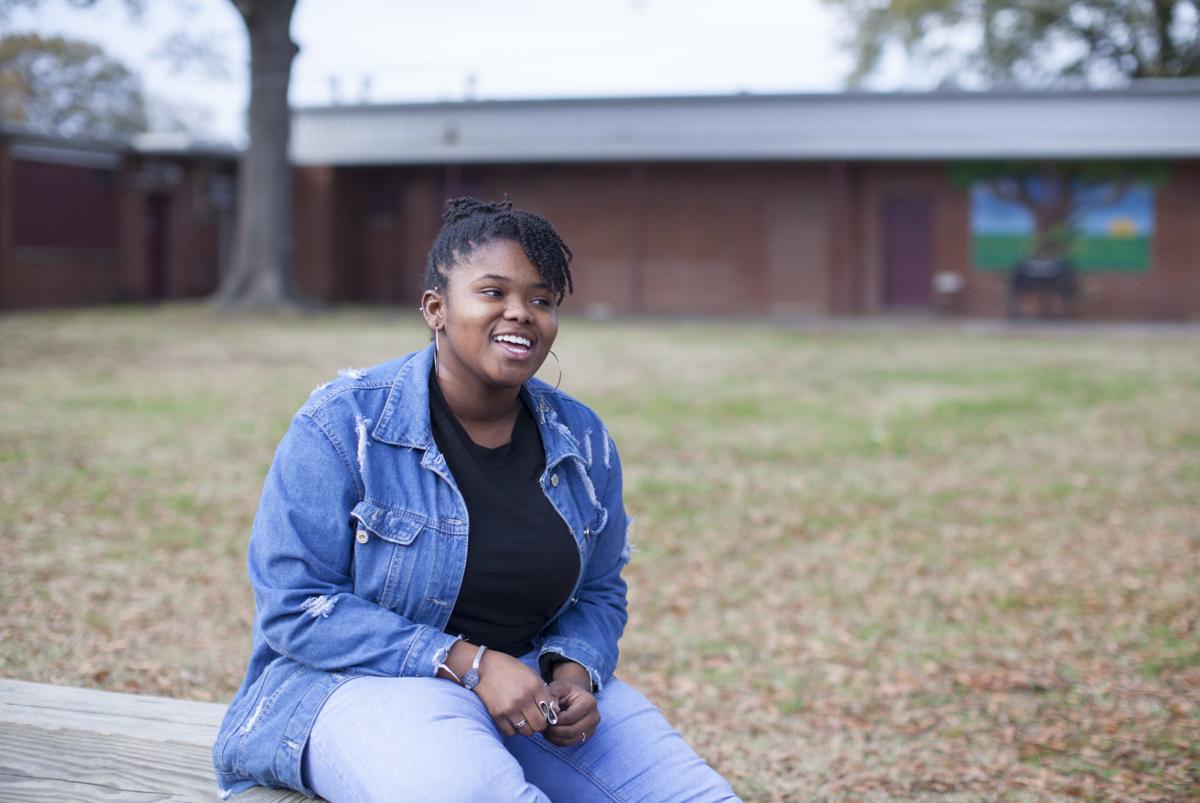 Asia Goode, a junior of Open High School, is pictured at the open space near a playground at Hillside Court in Richmond on Tuesday, Nov. 19, 2019. Goode, who lives at Hillside Court, hopes to make the open field into a community garden to expand food access in her neighborhood. 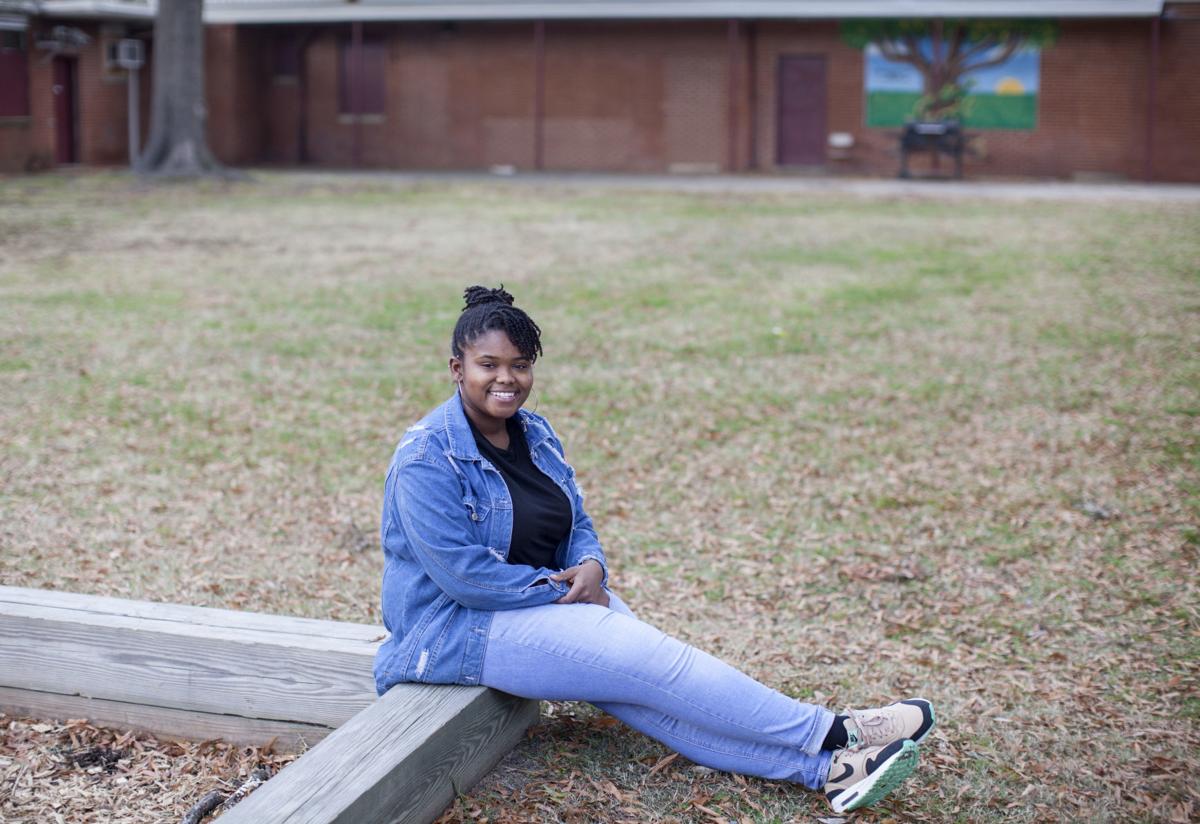 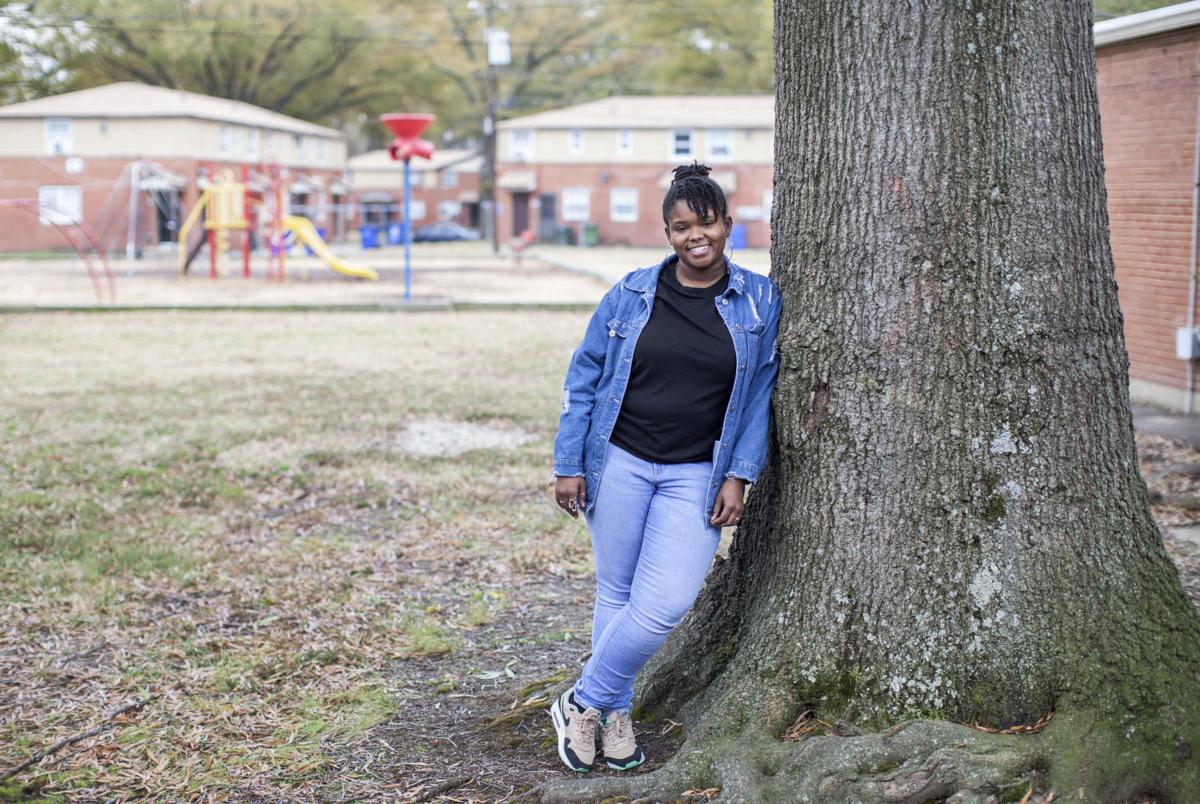 Asia Goode, a junior of Open High School, is shown at the open space near a playground at Hillside Court in Richmond on Tuesday, Nov. 19, 2019. Goode, who lives at Hillside Court, hopes to make the open field to a community garden to expand food access in her neighborhood. 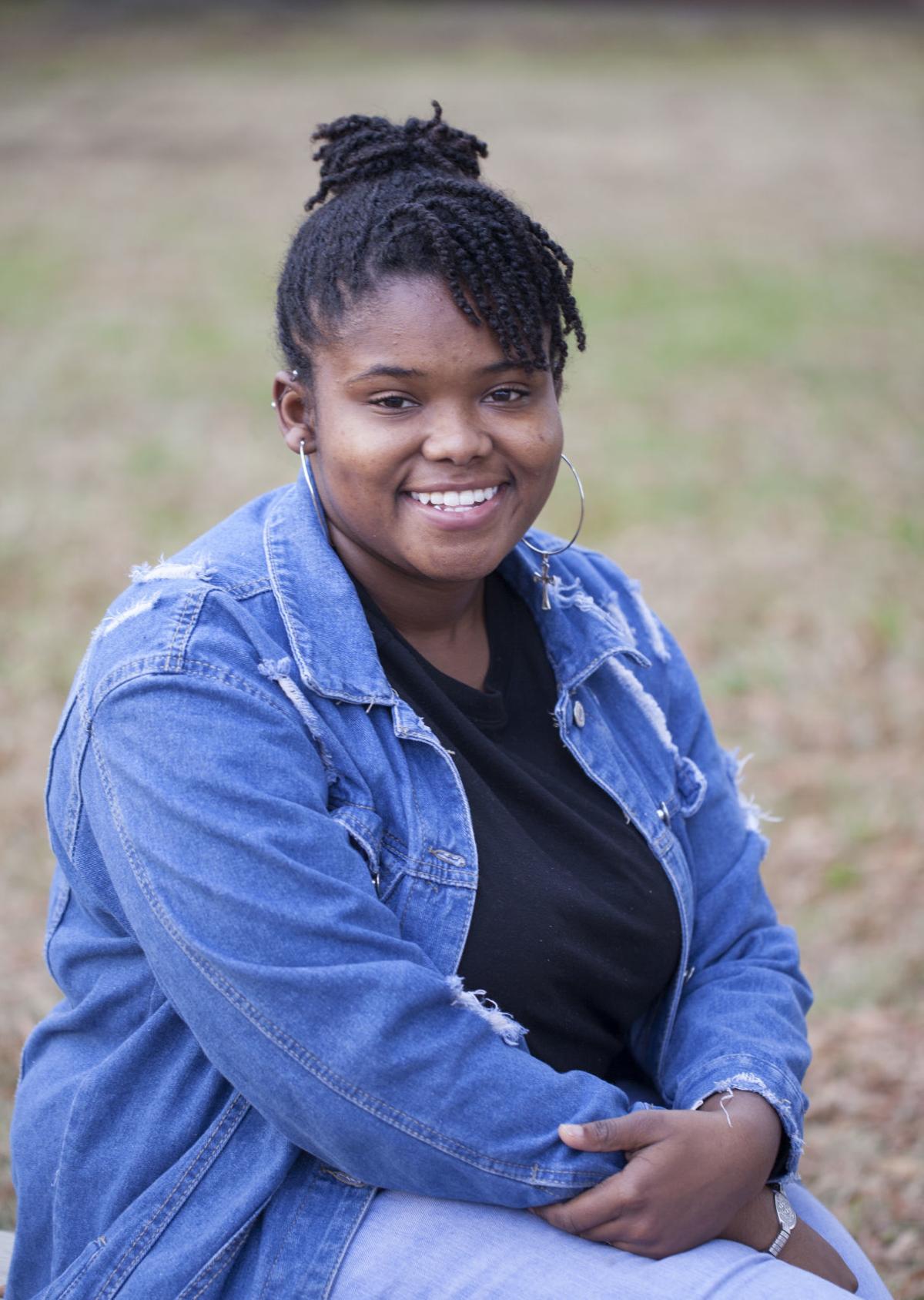 Asia Goode, a junior of Open High School, is pictured at the open space near a playground at Hillside Court in Richmond on Tuesday, Nov. 19, 2019. Goode, who lives at Hillside Court, hopes to make the open field into a community garden to expand food access in her neighborhood.

Asia Goode, a junior of Open High School, is shown at the open space near a playground at Hillside Court in Richmond on Tuesday, Nov. 19, 2019. Goode, who lives at Hillside Court, hopes to make the open field to a community garden to expand food access in her neighborhood.

Vegetables were something of a foreign commodity to Asia Goode growing up in Hillside Court.

“I didn’t even know what a Brussels sprout was,” Goode said.

Goode’s family sometimes ate tomatoes and lettuce, but it wasn’t until she was a teenager that she tasted her first Brussels sprouts. Now, the 16-year-old junior at Open High School is a full-blown vegetarian, and she is leading a new effort to expand healthy food access in her neighborhood.

Dead leaves crunched beneath her Nikes in mid-November as she surveyed ground zero for her plans: a partially shaded plot behind Hillside’s recreation center on Harwood Street. Goode was laying the groundwork for a community garden on the plot, an initiative that could help improve health outcomes for her neighbors.

The South Richmond public housing community, engulfed by industrial areas, is one of the most isolated neighborhoods in the city. Its 1,055 residents are more than 3 miles from the nearest full-service grocery store that carries produce.

“We get the short end of the stick sometimes,” Goode said. “On the South Side, I don’t think people invest in areas with low-income housing enough. I don’t think that’s right. There’s people over here who deserve to be looked into and cared about.”

Goode is a standout student at one of the region’s most competitive high schools. But what truly distinguishes her, teachers and neighbors say, is her commitment to making a difference in her community.

“That is intrinsic in her,” said Barbara Haas, a librarian at Thomas C. Boushall Middle School who has mentored Goode. “Everything she is fighting for, all of her values, all of her passion, that’s coming from within her.”

Goode’s vision for Hillside has roots in her eighth-grade Earth science class at Boushall.

Her teacher, Juliane Codd Toce, taught a lesson on the environmental impact of the meat production industry and explained how it contributed to her personal decision to not eat meat.

Vegetarianism piqued Goode’s curiosity. After talking more with Codd Toce, she decided she wanted to make the same commitment, but that posed a few challenges. Fruits and vegetables are difficult to come by at Hillside. Even if she could obtain them, she didn’t know how to cook.

Over the summer, Codd Toce invited Goode to her home for a different lesson: how to prepare risotto with spinach, asparagus and artichoke hearts. When the dish passed Goode’s taste test, she was hooked. So began Goode’s crash course in vegetarianism.

“At our stores, it’s a bunch of junk food,” Goode said. “I thought, what are all these crazy vegetables? Asparagus? I’ve never even heard of that. Beets? What’s that?’”

Codd Toce introduced Goode to chard, kale and mushrooms. She showed her how to incorporate dried beans into certain dishes so Goode could consume important proteins without relying on soy products. She taught her how to pick out ripe fruits and spot soon-to-be-spoiled produce.

The pair would often visit the grocery store where Goode’s family shops, a Food Lion on Jefferson Davis Highway in North Chesterfield. Other times, they would go to stores in wealthier areas, where vegetarian and vegan products abounded.

At the stores in wealthier areas, Goode noticed the size of the produce section and the quality of produce she could buy stood in contrast to the Food Lion where her family shopped. The disparities raised discussions between the two, Codd Toce said.

“Generally, when you go to parts of town that are more poverty-stricken, the grocery stores are further apart, harder to access and the produce section is smaller and there aren’t a lot of options,” said Codd Toce, who now teaches at Binford Middle. “We talked about how unfair that is and what can we do to change that.”

It wasn’t until Goode took a class at Art 180, a nonprofit in Jackson Ward, that she learned the term “food desert,” which the U.S. Department of Agriculture defines as a neighborhood where people must travel more than a mile to reach a grocery store. Three-quarters of South Richmond qualifies for the dubious denotation.

To Goode, the term was a revelation. It crystallized the economic forces she was up against as a Hillside resident. She realized how living in one of the deserts had shaped her choices before she began spending time with Codd Toce.

“Even if I was to go to a Food Lion before all that, I would go toward the honey buns, because that’s what I knew,” she said. “When I took that class, something clicked. I knew that something was wrong.”

Two convenience stores are within walking distance of Hillside Court. It is routine to see people returning from one of them with junk food in hand, Goode said. What limited fruits and vegetables are available at the stores, if any, aren’t always fresh.

Shalom Farms operates a mobile produce stand that visits the neighborhood weekly during spring, summer and fall so residents can purchase vegetables. Otherwise, they must trek to a store.

Goode’s mother doesn’t own a car, so once a month, her older sister, who does, gives them a ride to the Food Lion, 5 miles away, where they stock up for the month. Most of the fresh produce her family buys will last a week, at most. Then, she eats frozen or canned vegetables and other nonperishables to tide her over until they can make another trip.

Goode’s family receives Supplemental Nutritional Assistance Program benefits, more commonly known as food stamps. Their budget — about $300 a month — combined with the lack of access to fresh produce, makes being a vegetarian a challenge, Goode said.

Even without a self-imposed diet, people who live in low-income neighborhoods face obstacles to eating healthfully, said Duron Chavis, community engagement manager for Lewis Ginter Botanical Garden and one of the region’s foremost advocates for urban agriculture and community gardens.

With choices constrained by time, access and budget, families rely on corner and dollar stores, fast-food restaurants and other processed or frozen meals that are convenient but seldom healthy. Over time, those contribute to higher incidence of such chronic ailments as diabetes and heart disease.

In Richmond, community gardens have offered an entry point to healthy eating in communities where residents have few options.

Chavis served on a task force convened by former Mayor Dwight C. Jones to study food policy and advise how the city could promote more equitable access aimed at improving health outcomes in neighborhoods like Hillside.

The panel issued a report in 2013 with 17 short- and long-term recommendations. Among those were allowing SNAP recipients to use the benefits at farmers markets, emphasizing nutritional education in city schools, and hiring a food policy coordinator to lead efforts.

Goode is working with Chavis and the Lewis Ginter Botanical Garden Urban Gardener Program on the community garden at Hillside. The nonprofit will provide seed money for the garden and technical assistance to get it up and running in the spring.

She wants her elderly neighbors to have produce available without taking a tiresome trip to the store, and her younger ones to try something new straight from the vine. She wants the tomatoes and lettuce and potatoes and peppers they plant together to flourish. This time next year, she wants to look back on a growing season that brought a bounty to her community borne out of her ambition.

Patrice Shelton, Hillside’s tenant council president, said she believes the garden will benefit everyone in the neighborhood. She is proud the project sprung up from within Hillside.

“Everyone thinks that outside folks know better what’s needed in the community,” said Shelton, also a certified community health worker for the Richmond City Health District. “For [Goode] to step up as a youth and take the initiative is great to see.”

In 2021, Goode will graduate from Open High. She is interested in studying agriculture and sustainability, but hasn’t decided where she will apply to college.

For the moment, she is focused on the plot behind the recreation center. Nearby, a mural depicts a towering tree alongside the words: “Strong roots run deep in Hillside Court.”

More are on the way.

Asia Goode, I am so happy to hear this. You are a wonderful young lady. Keep us posted.

What a great story. I look forward to hearing more about the progress of this garden and this young woman’s future projects.

This young lady is a perfect example of someone that will make changes in a situation that government can only talk about!