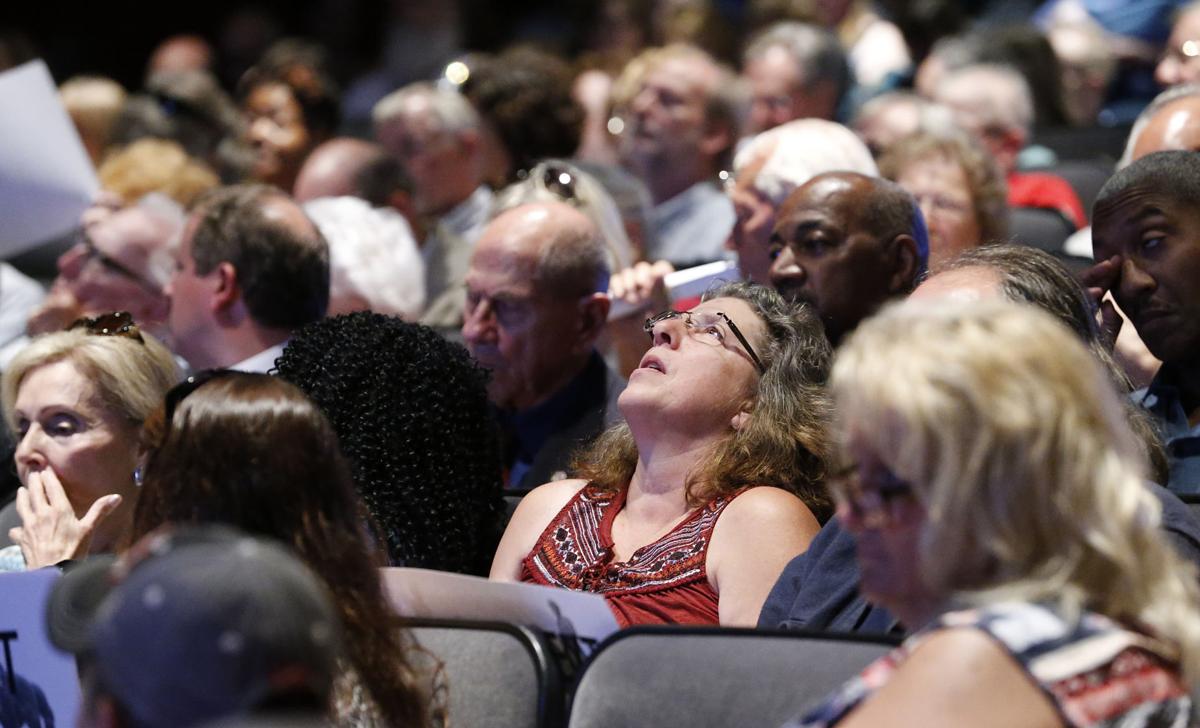 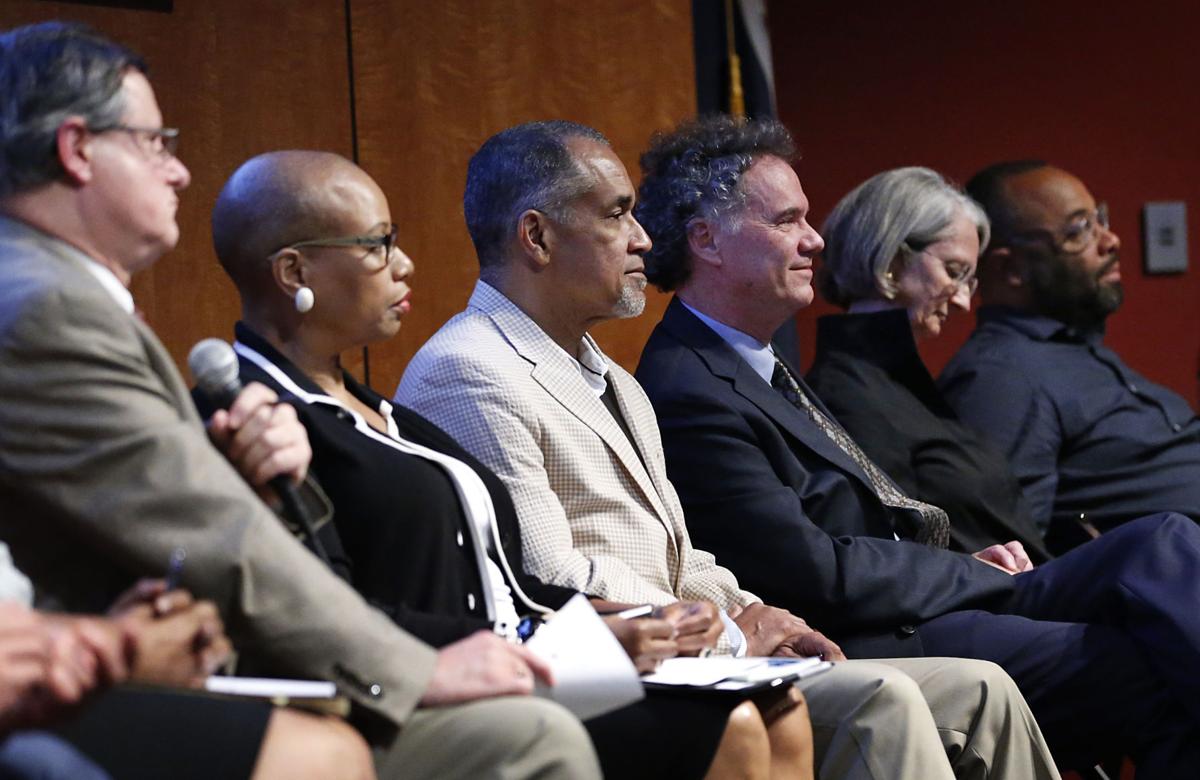 The Monument Avenue Commission listens to a speaker during their first public hearing at the Virginia Historical Society Wednesday, August 9, 2017. 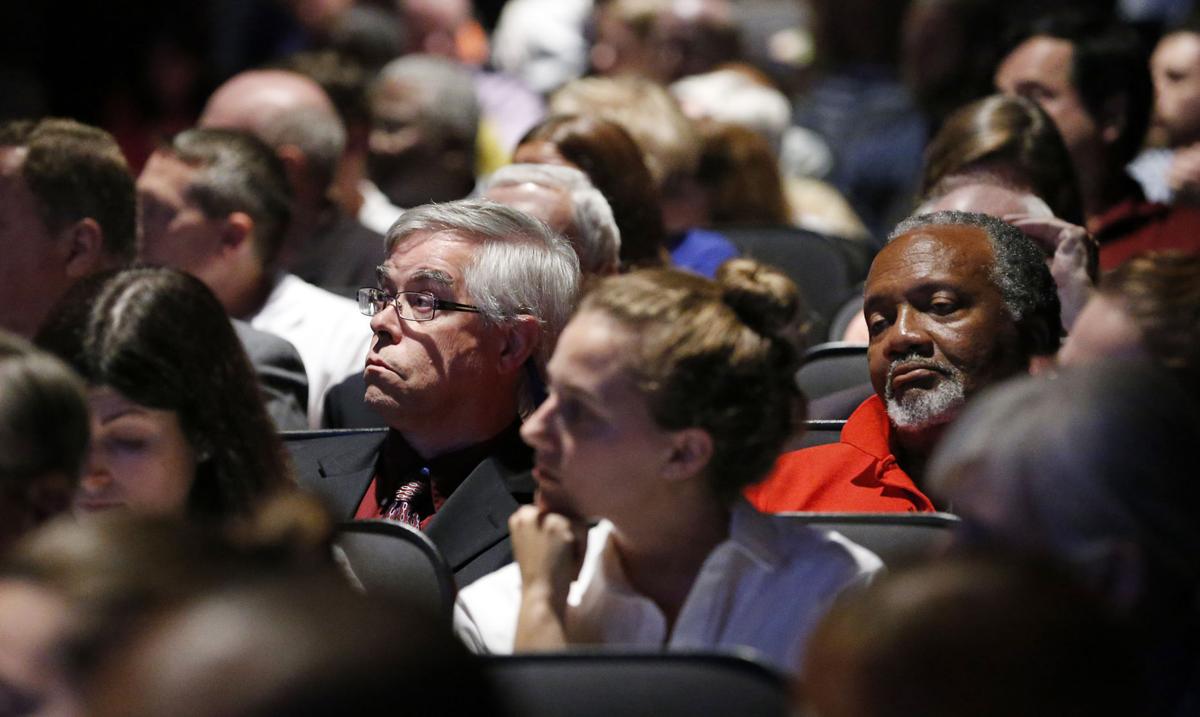 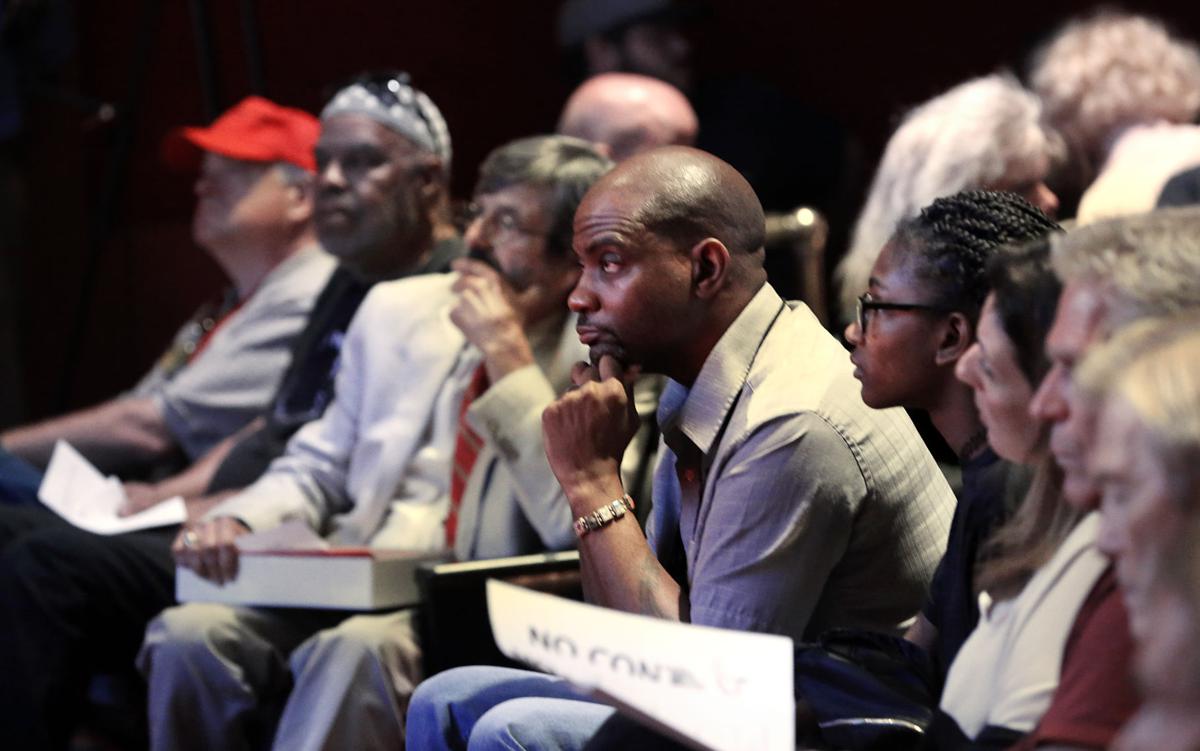 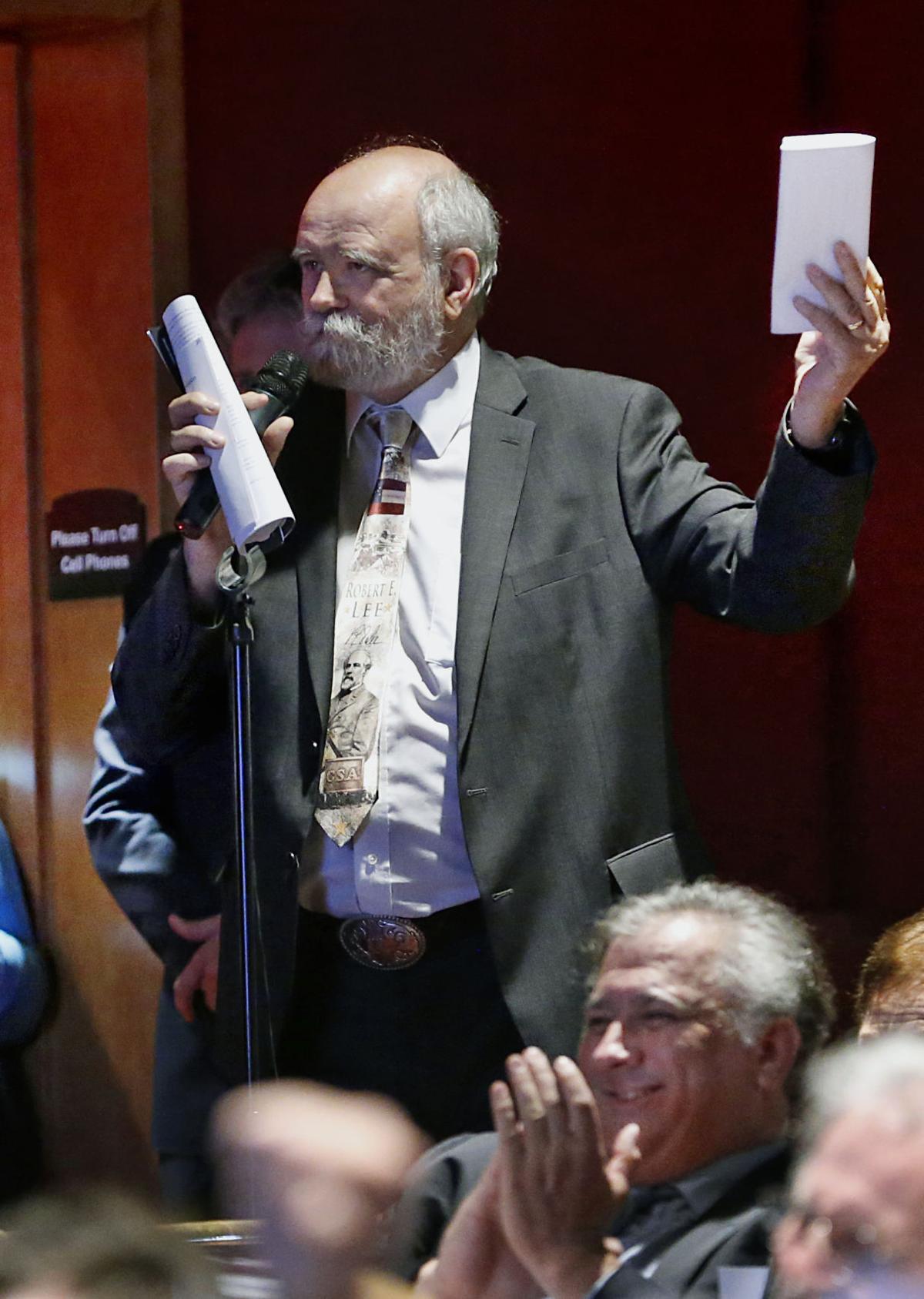 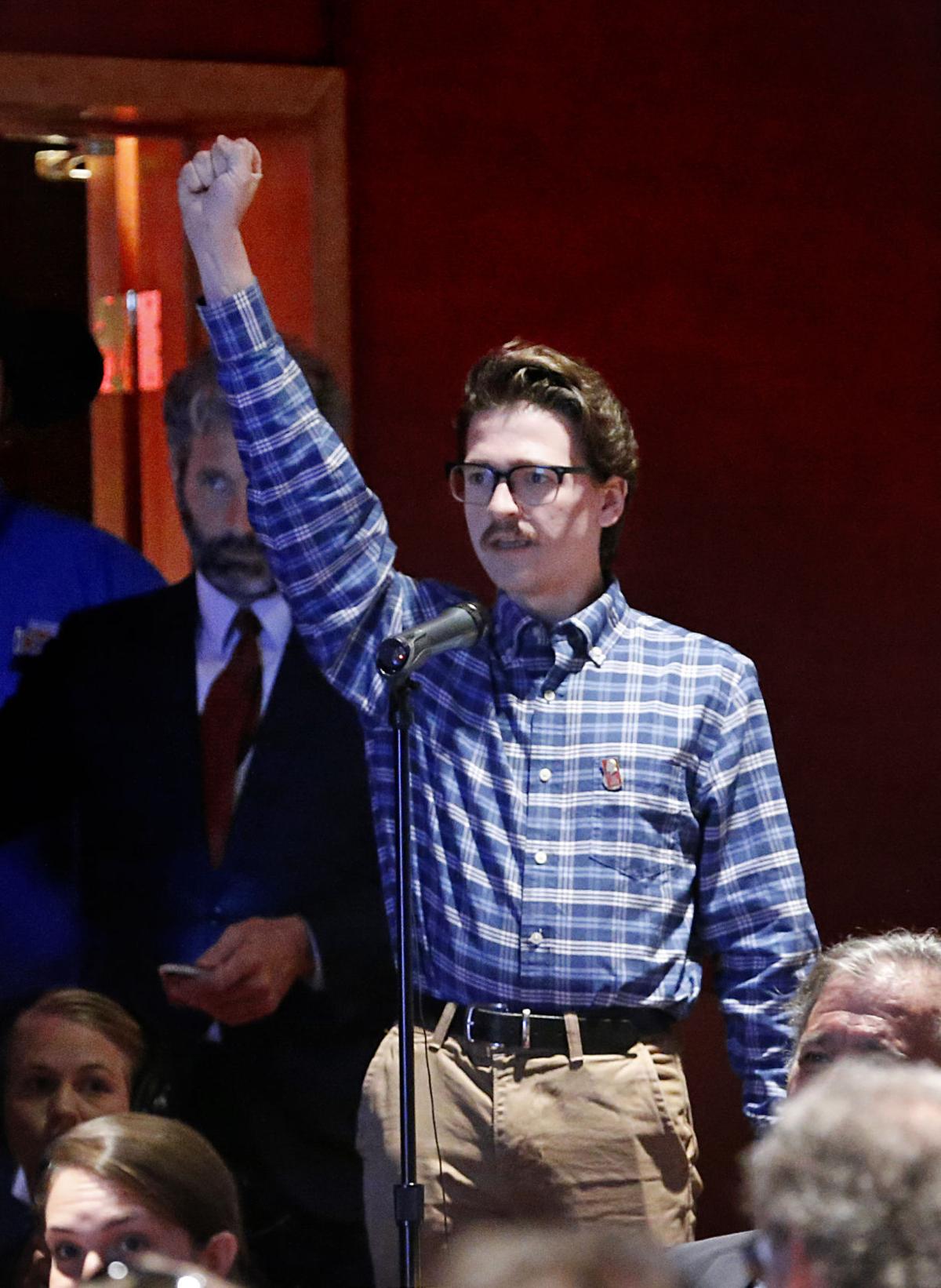 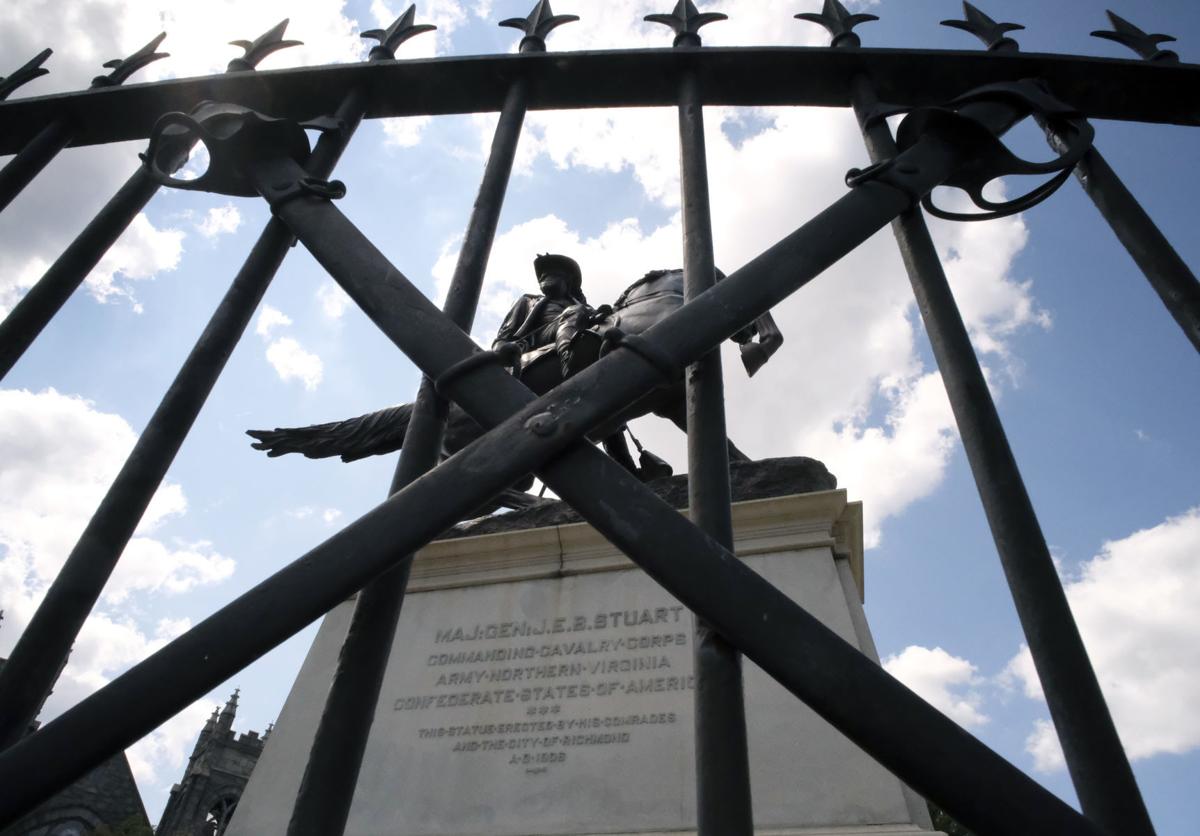 Gen. J.E.B. Stuart’s statue is one of several Confederate memorials on Monument Avenue in Richmond. A city commission is exploring how to reinterpret the monuments.

The Monument Avenue Commission listens to a speaker during their first public hearing at the Virginia Historical Society Wednesday, August 9, 2017.

Gen. J.E.B. Stuart’s statue is one of several Confederate memorials on Monument Avenue in Richmond. A city commission is exploring how to reinterpret the monuments.

So much for civility.

More than 500 people gathered Wednesday in the Virginia Historical Society auditorium for the contentious first public hearing of Mayor Levar Stoney’s Monument Avenue Commission. The event, held with the intent to gather input on how best to add context to the Confederate statues lining Monument Avenue, bordered on chaotic as more than 40 speakers weighed in and tempers flared.

The standing-room-only crowd weathered a tense, two-hour hearing that saw members of the commission attempt in vain to keep the conversation civil as speakers offered opposing viewpoints. Audience members, at points, heckled or shouted down some speakers with whom they disagreed.

Wednesday evening’s event was the first of two scheduled public hearings for the commission. Attendees who wished to speak were assigned a number upon entry. Organizers decided beforehand that 50 people chosen by raffle could talk for two minutes or less but did not stick with that plan throughout the night, allowing some to speak without having had their numbers called.

Gregg Kimball, the Library of Virginia’s director of education and outreach and the commission’s co-chair, reminded speakers early in the night, when some chose to take up whether the statues should stay or go, that the commission was not holding the hearing to consider that.

The commission asked attendees to share what adding context to the monuments should look like — and what, if any, monuments they would add to the avenue if given the chance.

Henry Kidd, who identified himself as a former national officer of the Sons of Confederate Veterans, objected to adding context.

Many people said adding signage to the monuments isn’t objectionable, so long as it doesn’t cast the men depicted in a negative light. Some suggested adding statues of prominent African-Americans to acknowledge their contributions to the city and state. Others said the monuments should remain untouched.

Thelma Brown said she didn’t see her ancestors honored when she looked at Monument Avenue. She called the current monuments a reflection of oppression, and said they cause her pain.

“Virginia has a debt to pay, and we’re waiting,” she said.

Others lobbied for a monument to African-Americans enlisted in the Confederate military.

Despite efforts to keep the meeting civil, tensions rose throughout the night as speakers decried or defended the monuments and what they believe they stand for.

George Knight said the monuments represent “white supremacy” and questioned why Richmond continued to house “participation trophies” for the Confederacy.

“You lost, get over it already!” he shouted.

A mixture of applause and boos drowned him out.

“Down with white supremacy!” he said before leaving the mic to return to his seat.

“Sir, you know, we really don’t need that,” he said. “I hope you all did hear what I said at the beginning of this. We don’t need inciting people. We need conversation.”

The following speaker, Travis Toombs, said Monument Avenue was a Confederate memorial and that if anyone wants to build more monuments, they could do it elsewhere.

“There’s an entire rest of the city to add statutes to whatever you so choose to,” said Toombs, a Petersburg resident.

An hour and a half into the hearing, organizers kicked a woman out for shouting down a speaker who had run over his allotted time. She had previously spoken and was interrupted by audience jeers and asked to wrap up when her remarks ran long. A police officer escorted her out, and more attendees followed voluntarily.

One of those who left, Paul Benson, said he was doing so because the event was no longer fostering a constructive conversation.

As politicians in Charlottesville and New Orleans have pursued the removal of Confederate statues in their cities, Stoney has taken a different tack, publicly stating that he believes Richmond’s monuments should remain.

In June, he formed a 10-person panel of community leaders, academics and historians and tasked them with exploring how best to “add context” to the statues that will tell “the whole story.” Those include Confederate Gens. Stonewall Jackson, Robert E. Lee and J.E.B. Stuart; the president of the Confederate States of America, Jefferson Davis; and Confederate naval commander Matthew Fontaine Maury.

Stoney’s stance has drawn criticism from people and organizations on both sides of the debate.

Some speakers questioned why the mayor wasn’t present at Wednesday’s public hearing. Stoney did not attend because he’s at a conference in Salt Lake City, said his spokesman, Jim Nolan.

As the proceedings drew to a close, Sarah Driggs, a member of the commission, told the audience that she was unhappy with what unfolded.

“I’m disappointed in how many people got up tonight just to make a speech. … We’re here to hear ideas,” Driggs said.

Members of the audience began to heckle her. Kimball, again, intervened. “I’m not sure this is going to be very productive, so I’m just going to say thank you for coming out; we have another event coming up,” he said.

The second public hearing is scheduled for Sept. 13 at the Virginia Historical Society.

When Mayor Levar Stoney proffered a “mend it, don’t end it” approach to our Confederate monument question, he clearly intended to straddle the…