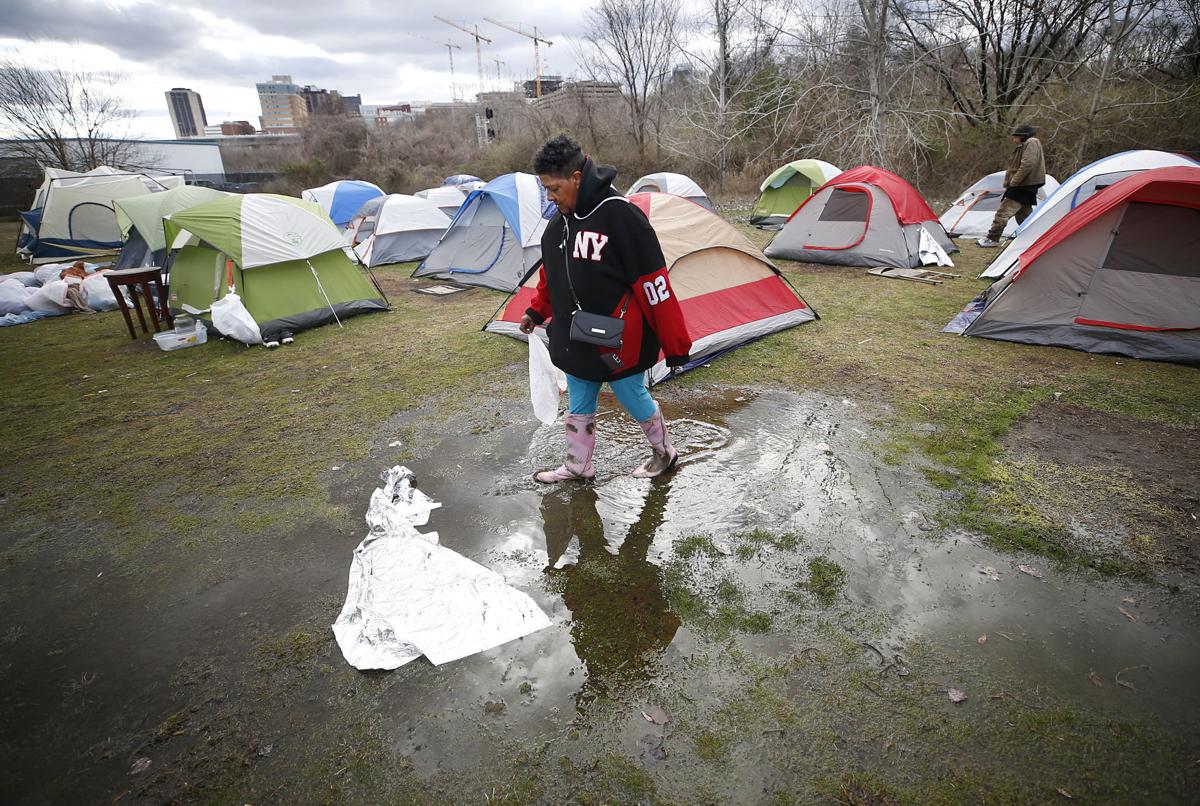 Rhonda Sneed cleaned up the encampment she has helped establish for homeless people in Richmond through Blessing Warriors RVA. The site, which lies in a flood plain, is near Richmond’s emergency shelter on Oliver Hill Way in Shockoe Valley. 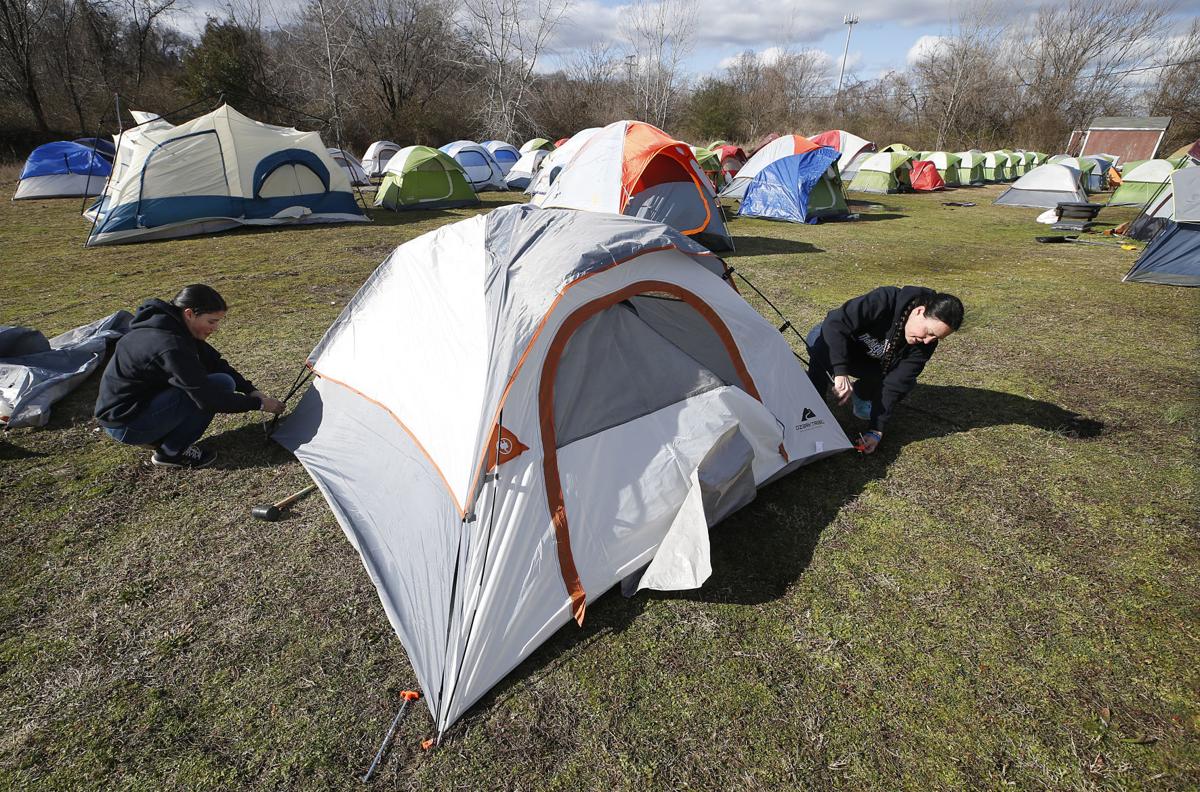 (L-R) Seventeen-year-old Mikayla Adkins and her mother Kelly Adkins set up a tent for the growing number of homeless at the Shockoe Valley site. They volunteer with Blessing Warriors RVA which organized the camp. Photo was taken on Friday, February 7, 2020. 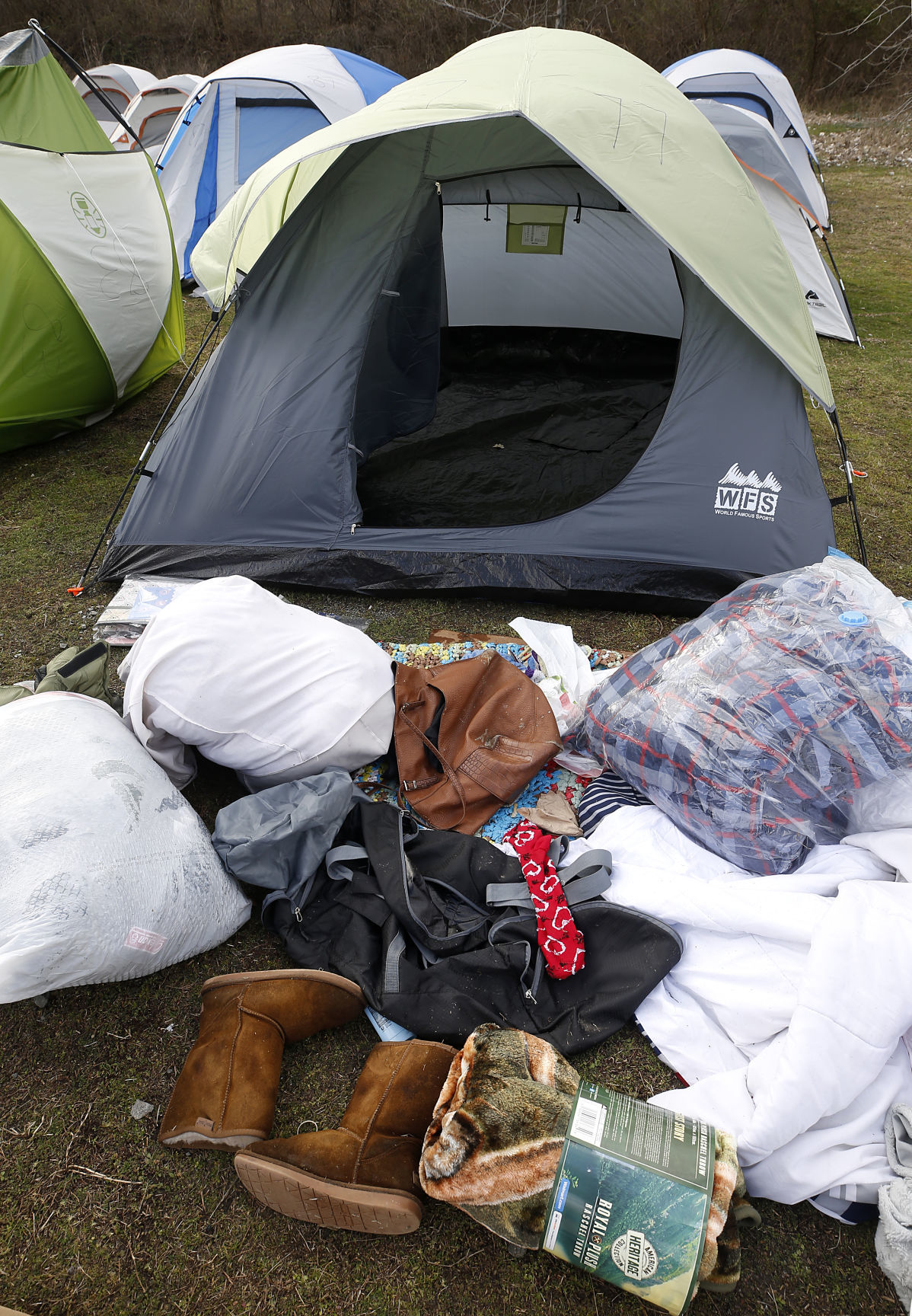 Some living at the site decided to try to stay dry in their tents Thursday night instead of going into the city’s shelter, which officials opened around 9 p.m. 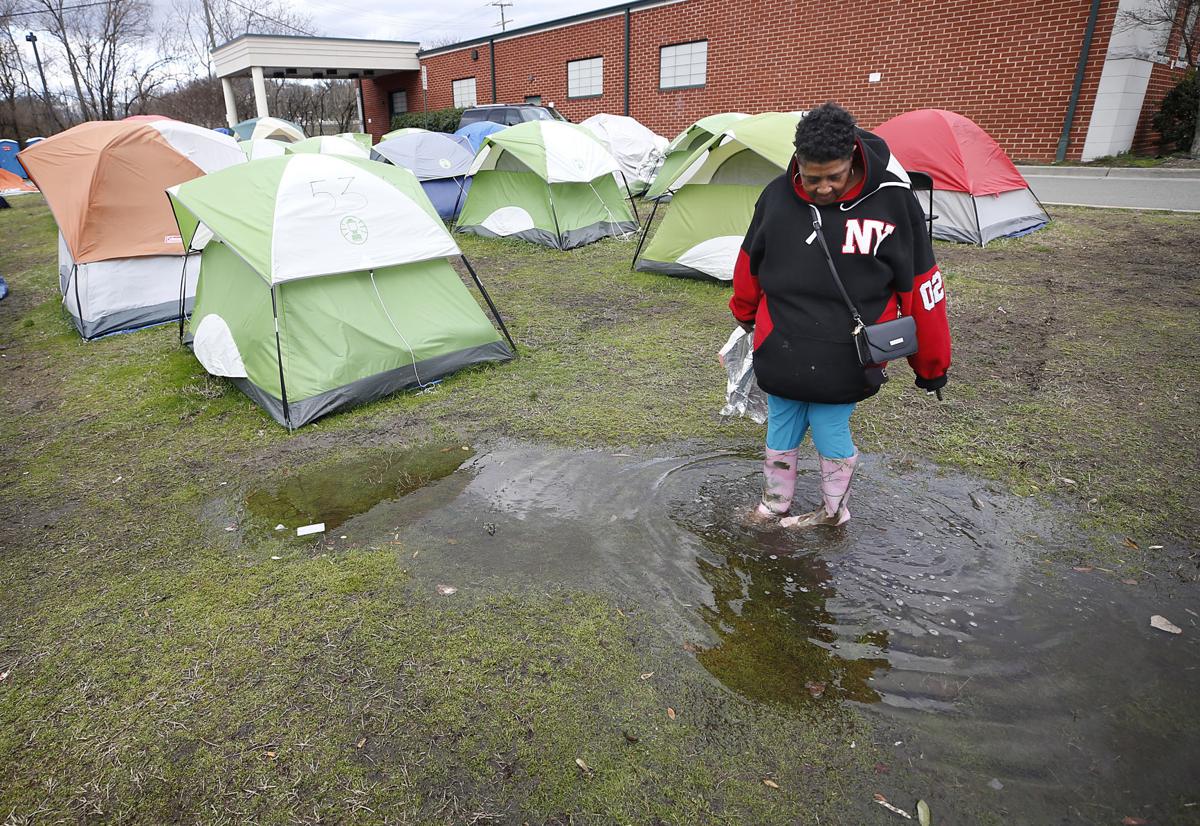 Rhonda Sneed cleaned up the encampment she has helped establish for homeless people in Richmond through Blessing Warriors RVA. The site, which lies in a flood plain, is near Richmond’s emergency shelter on Oliver Hill Way in Shockoe Valley.

(L-R) Seventeen-year-old Mikayla Adkins and her mother Kelly Adkins set up a tent for the growing number of homeless at the Shockoe Valley site. They volunteer with Blessing Warriors RVA which organized the camp. Photo was taken on Friday, February 7, 2020.

Some living at the site decided to try to stay dry in their tents Thursday night instead of going into the city’s shelter, which officials opened around 9 p.m.

Several tents partially collapsed, leaving the people huddled inside, their bedding and other possessions unsheltered from the downpour. Ankle-deep puddles formed on the rain-soaked plot where the 91 tents are clustered. Many flooded.

“It was a mess out here,” said Rhonda Sneed, a volunteer who has led outreach efforts with her faith-based charitable group Blessing Warriors RVA. First responders took five people from the site to the hospital, Sneed said.

With conditions deteriorating and rain forecast through the night Thursday, Sneed said she had pleaded with an adviser to Richmond Mayor Levar Stoney to open the city-owned emergency shelter next to the encampment on Oliver Hill Way. The shelter was not scheduled to open because temperatures were not forecast to drop to 40 degrees or lower, a bar set by City Council ordinance.

Not long after, Sneed said, staff members came and unlocked the doors.

Reggie Gordon, the city’s deputy chief administrative officer for human services, said a state of emergency Gov. Ralph Northam declared for flooding prompted the decision to open the shelter. The encampment is located in a flood plain.

About 40 people went into the shelter overnight, Gordon said. Dozens of others stayed in their tents. To Gordon, that demonstrated the complexity of the situation.

“I think this is a more complicated issue than just coming inside,” Gordon said. “Even on a night like last night, we were open to come in from the rain and a lot of people didn’t do that.”

Some people who slept in the tents overnight said they didn’t want to leave and risk getting wet. The shelter did not open until about 9 p.m.

“By that point, it kind of defeated the purpose,” said Bessie Fentress, a 68-year-old homeless woman who lives at the encampment. She said she stayed dry in her tent.

Sneed and other volunteers cleaning up the site Friday said they were barred from bringing dry clothes to drenched people who chose to go inside. That frustrated Sneed, but she said she was thankful the city opened the doors. The night before brought rain and even colder temperatures; the shelter remained locked.

Asked why, Gordon cited the council ordinance governing shelter use that he said tied the administration’s hands. He deferred questions to the council about whether the ordinance should be amended. Councilwoman Ellen Robertson, who represents the area, did not return a call on the matter Friday.

Robertson convened a meeting at the shelter on Wednesday that grew emotional. She and other city officials wanted to discuss a strategic plan aimed at ending homelessness by 2030. The people living in the tents and advocates for the homeless demanded immediate assurances the encampment would not be removed without first providing shelter for all who are living there.

The city asked Sneed to take the tents down at the end of December. No trespassing signs bearing city insignia were posted at the encampment last month.

City officials and Virginia Commonwealth University, which owns the property the encampment is on, privately discussed clearing out the encampment. They have since changed course, saying they will work to connect the people living in the tents with existing services and shelter.

The region’s homeless population grew this year for the first time since 2011, according to a biannual census conducted last month. The number of people who are sleeping in shelter beds or outside rose from 497 last year to 549, a 10% jump.

People who sleep outdoors have historically been scattered through the region. The encampment, dubbed Camp Cathy, has brought many of them onto a single plot, laying bare the scope of the problem.

Nearby, Kevin White sorted through his remaining possessions, tossing some that he said were either too worn, or too soiled from water that seeped in during the storm.

He did not go into the shelter Thursday night, nor does he intend to, regardless of the weather. A Marine, the 47-year-old said he can survive anything.

“I’ll wrap up in two trash bags and I’ll be OK,” he said. “For the ones that need [the shelter], let them have it. Sleeping on a quarter-inch mat under an aluminum foil blanket is not my idea of comfort when you’re trying to give a homeless person somewhere to sleep.”

White became homeless in November after losing his job. Since then, he said, he has tried to stay positive and trust that God put him at the encampment for a reason.

He said he had to be at work in two hours. Fortunately, he said, his boss agreed to help him with his laundry.

PHOTOS: Tent city and the homeless

People discuss the plight of the homeless during a meeting at the Annie Giles Community Resource Center Wed., Feb. 5, 2020.  A tent city was s…

Janis Peace commenting: Maybe some people aren't aware of the gaining popularity of Thrift stores. Goodwill and Salvation Army take in a LOT of money each day. Why aren't they and other thrift store chains helping these people. I would think they could gain employment, help, and other needs through these organizations along with the area churches. Even people with some disabilities could help sort through what they take in on a daily basis. The money they make could pay towards some sort of daily housing. Some may not want to go inside because others may take their places outside or take what few things they do have. If pets aren't allowed inside, I can certainly see why they would want to stay outside. When living outside is a choice, it's one thing but if someone is truly homeless, they should have help. In many cases it could be "earned" help, but help nonetheless.

I guess I don't understand why volunteers are cleaning the area when the homeless could be doing so if they are well enough. No one should have to sleep in wet clothing. I don't know about all of these rules but everyone was warned about the weather ahead of time and those who knew the shelter would be closed should have opened it. Some things are just common sense. Also, so that everything is under control, maybe a paid guard or off-duty police could stay in the area to keep things calm.

There are people in this area with so much wealth that they spend so much money on frivolous things....meanwhile the City deals with an ever-growing homeless problem without a clue how to deal with it...too bad!

J.Mark Wittkofski …. show us the way with a little of the extra wealth you have on your hip …. others will surely follow your lead. Period.

We can always count on you. Tracey, to add your selfish two cents to the subject. I asked you long ago whether your kids, for example, enjoyed free public education with the supplemental dollars of others and you never answered. You try so hard to have people belong that you're a man on your own and that's pure nonsense. You couldn't survive without the contributions of others and so you should get off your kick of being such a big man of much independence. You look silly and selfishness is a nasty trait.

are you saying that wealthy people should throw money to those who may not want to improve themselves? annie pelfrey

Are you of the mistaken belief that there is enough to go around?

The city plans to solve the problem in TEN YEARS. These people can't wait TEN YEARS. They need solutions NOW. Why can't the city buy some property or use property already city-owned and build Tiny House villages on them. A Tiny House only costs about $2,000 to build an they are cozy, safe , warm and dry. They can be secured and the people have some privacy. But, TEN YEARS?? How much will the problem grow over TEN YEARS/? That is not even a reasonable goal. People who live in Tiny Houses don't feel homeless because they have a home. They are tiny, but they are HOME. They could put up a building with toilets and showers, too. But, I guess it's easier to harm than help. They want a hand up, not a handout for life.

Rosi: It's just too much to ask of those who have it all to share with those who have nothing. A conscience and good heart are required and sadly, there's not much of that going around these days. The tiny homes are a wonderful idea. Tax exempt mega churches should be contributing to this. Where are they?