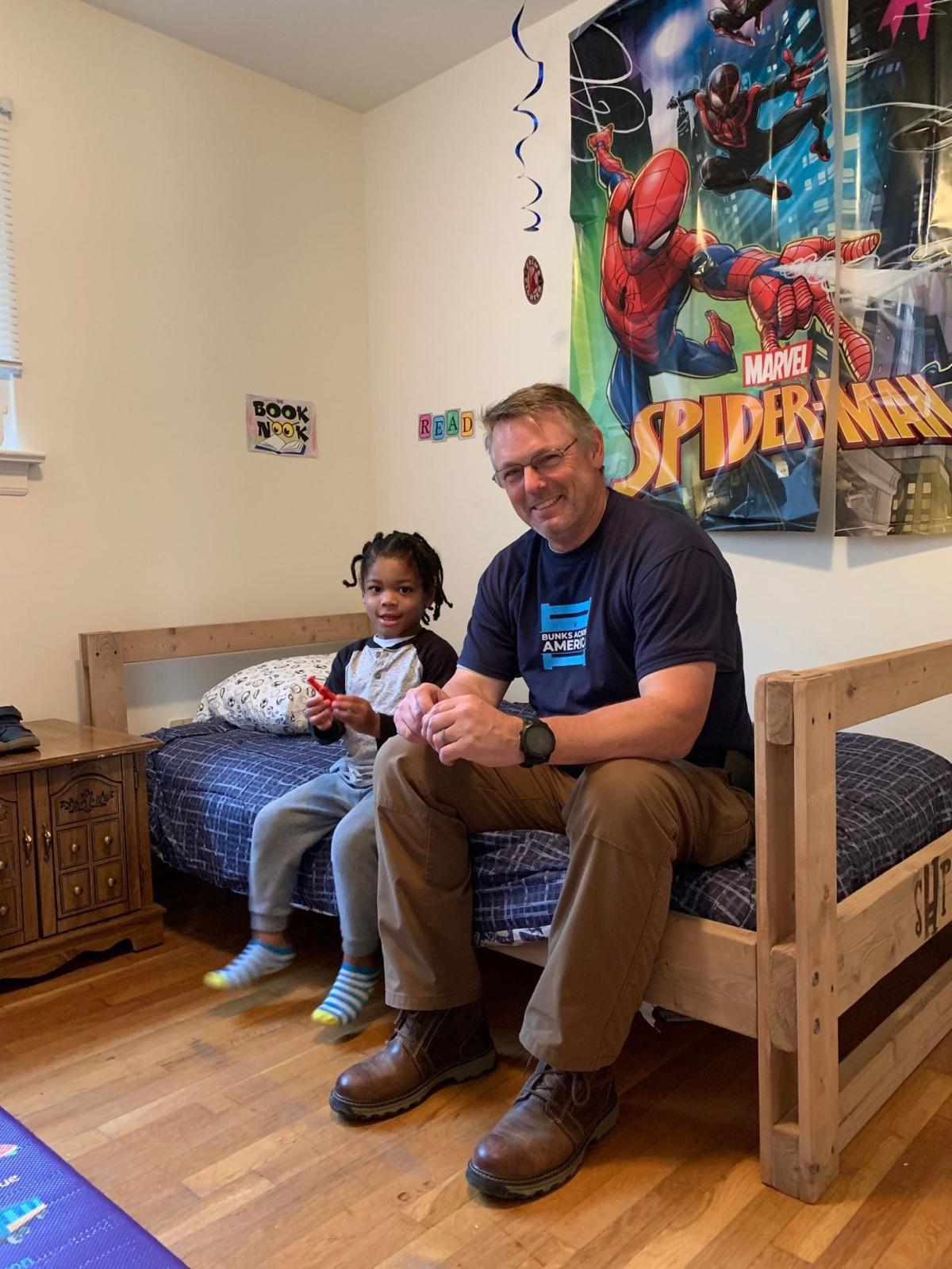 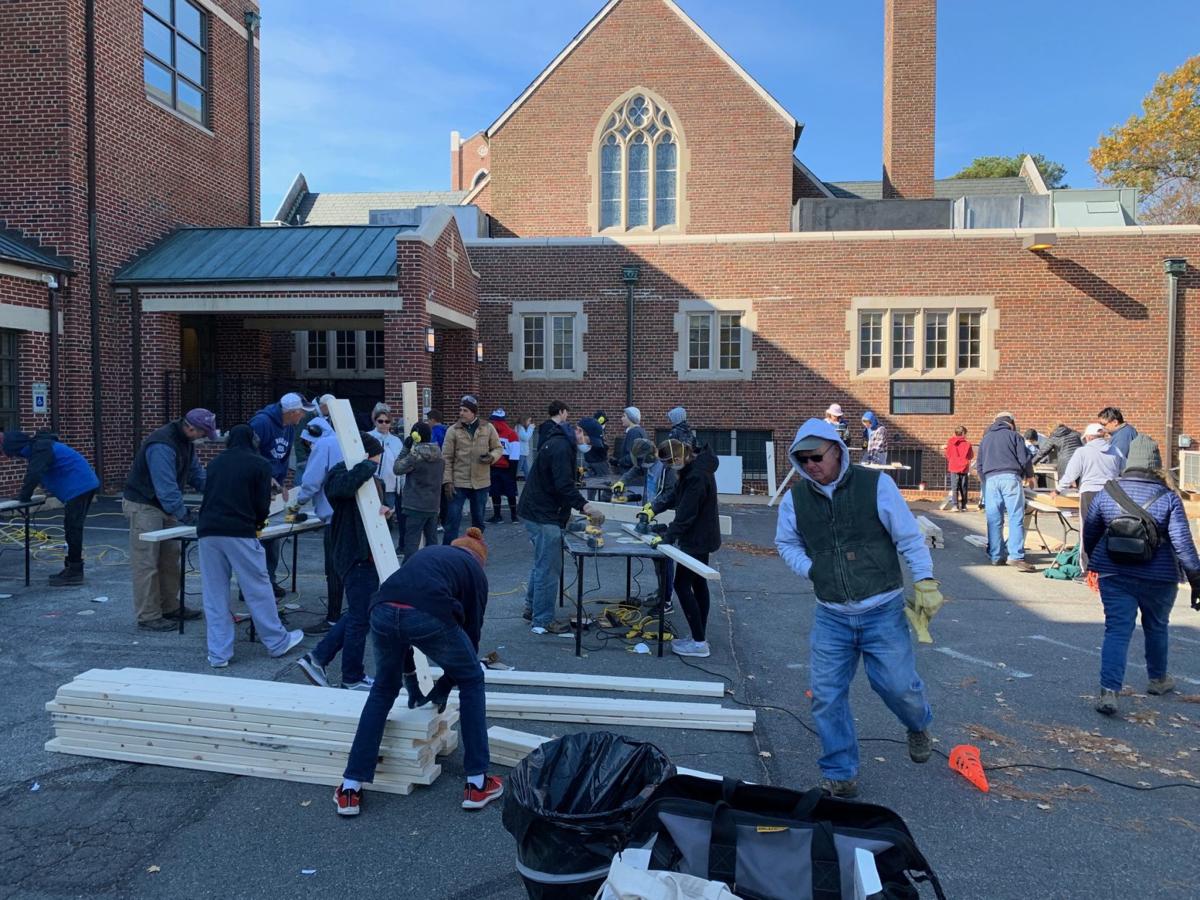 Volunteers gathered to build beds at Saint Bridget Catholic Church for Sleep in Heavenly Peace, a nonprofit that builds beds for children who need them. A new Henrico chapter of the national group launched in early 2019.

Taylor Keeney holds her 4-month-old daughter, Frances. Behind them are some of the diapers that were donated to Little Hands Virginia, a new nonprofit organization created to provide essentials to babies and parents in need of help in the Richmond area.

Volunteers gathered to build beds at Saint Bridget Catholic Church for Sleep in Heavenly Peace, a nonprofit that builds beds for children who need them. A new Henrico chapter of the national group launched in early 2019.

Taylor Keeney holds her 4-month-old daughter, Frances. Behind them are some of the diapers that were donated to Little Hands Virginia, a new nonprofit organization created to provide essentials to babies and parents in need of help in the Richmond area.

Near the end of last year, Curtis Marshall saw a story on CNN about an Idaho-based organization that built and donated beds to children and felt moved to do something.

“A perfect fit for me,” he thought.

Taylor Keeney wanted to offer baby clothes and other items she no longer needed to an organization that would pass them along to parents in need, but she couldn’t quite find what she was looking for. Then, last Christmas as her church was helping families in need with various items, she got to thinking, “What happens come February” when such families need something?

In other words: “How do these parents get help when it’s not Christmastime?”

Little Hands Virginia — a nonprofit that partners with social services agencies and other organizations to address the basic needs of children up to 3 years of age — was born.

Little Hands and the Henrico County chapter of Sleep in Heavenly Peace, led by Marshall, are two fledgling nonprofits that last year about this time didn’t even exist.

Since it launched in the spring, all-volunteer Sleep in Heavenly Peace has built and delivered about four dozen beds to children who previously were sleeping on couches or floors.

By the end of the year, all-volunteer Little Hands will have helped 100 children in about four months.

Both groups expect those numbers to multiply in the coming year as word gets out and they engage with more donors and find more recipients who need the help.

“I feel like my career has pointed me to do this,” said Marshall, who spent 27 years in federal law enforcement, the last 21 as a special agent with the Bureau of Alcohol, Tobacco, Firearms and Explosives in the Department of Justice, and is now vice president of safety and security for Colonial Downs Group/Rosie’s Gaming.

“Anyone in law enforcement can tell you about the need for beds for kids in their towns. When I found out about the organization ... I thought, ‘There’s a project I could do.’ ”

Sleep in Heavenly Peace started as a youth group project in Luke Mickelson’s garage in 2012. The group built a set of bunk beds for a family whose children were sleeping on the floor. With leftover lumber, Mickelson and his family built another and — astounded by the need and gratified by the difference they could make — decided to launch a nonprofit.

Now, there are almost 200 chapters around the country, and the organization has built and delivered nearly 15,000 bunk beds this year.

According to the organization’s numbers, 2% to 3% of U.S. children do not have beds, a statistic that might amaze some but not Marshall who, from his days in law enforcement, was familiar with that situation.

Poverty is a common reason for children not having beds, Marshall said, but situations vary: sometimes families have fled violent domestic situations and left everything behind or have been moving around, living in temporary quarters, and only recently settled into their own place.

Where do kids without beds sleep?

“Some sleep with mom and dad, some on the floor, on blankets or sleeping bags,” Marshall said. “Some sleep on couches.”

SHP volunteers build the beds from scratch, sawing, sanding and staining raw lumber into no-frills, sturdy beds. Marshall has organized build days with church and civic groups. The organization works primarily through Henrico Social Services and Henrico Public Schools, as well as churches and other nonprofits, to find recipients; the beds are for kids ages 3 to 17. Beds (and accompanying bedding) can be delivered and put together in about half an hour, Marshall said.

But the joy — for the volunteers and the recipients — lasts a lot longer.

“I think this organization is a godsend,” said Jasmine, whose 3-year-old son, Aiden, recently received a bed from SHP. Howell had fled what she deemed a dangerous domestic situation and lost many of their belongings, including his bed. (She asked that her last name not be used.)

“I was with my mother at the time [of the bed delivery], and we fell in each other’s arms in tears because we were so grateful,” Jasmine said. “She told me, ‘If I didn’t believe in angels before, I certainly do now.’ It was the best Christmas gift that anyone could have given us.

“My son loves his bed. It literally brings tears to my eyes and joy in my heart when I look in his room and see him sleeping so peacefully.”

Before Marshall left, Aiden asked him to sit on his new bed for a photo.

In the coming year, Marshall is hoping to connect with more funding and volunteers — “Anybody can work a sander, anybody can stain the beds,” he says — and possibly acquire a trailer that would make their work more efficient.

“It’s been a blessing,” Marshall said of the group and its mission.

Keeney had just made a delivery on her way to work — dropping off a stroller, car seats, clothes and diapers — when we spoke the other morning. The former press secretary for Gov. Bob McDonnell is now the director of strategic communications and advocacy for Hunton Andrews Kurth’s global economic development, commerce and government relations group. Little Hands is what she does in her spare time.

In the fall of 2018, while preparing for the arrival of her second child, Keeney found some baby clothes and other items she wouldn’t be needing and wanted to get them directly to parents who could use them and not just turn them over to a thrift store.

She thought up the idea of Little Hands, but before heading down that path, a friend connected her to local departments of social services. Keeney asked if there was even a need for the sort of organization she envisioned.

“It’s interesting to me that we haven’t had something like this before, but at the same time I’m incredibly happy we’re here now and we’re able to help so many families and babies,” said Keeney, who noted Little Hands is modeled on organizations in other states.

Little Hands collects new or “gently used” items and has helped a variety of families: “Everything from a mom down to her last couple of diapers and just needs a couple of boxes and wipes to a mom expecting a baby and has nothing,” Keeney said, “and everything in between.”

Little Hands receives referrals from local social services agencies and nonprofits — it started with four such partners and now has more than 20 — and Keeney hopes it will prove to be a complementary service to the partner organizations, freeing them up to focus on their mission instead of having to scramble to fulfill a need for diapers or car seats or almost anything else on short notice.

One of those partners is Henrico Parent Infant Program, which works with families across income levels, though many are facing economic hardship.

Katy Nowlin, an early intervention service coordinator for the program, said Little Hands has been a “huge help” as she makes home visits to assess what families need.

“In the past, when coming across a family in need of necessities, we would have to direct them to several different places, like diaper banks or other charities,” Nowlin said. “Often, these families don’t have adequate transportation, so my co-workers and I would often send email requests for specific items and drive around town to get them.

“Little Hands has implemented an easy request form where anyone in my agency can anonymously request items on behalf of our clients like diapers, toys, clothes and even big items like car seats and cribs. Most, if not all, of the items I’ve had were brand-new, and all were delivered to my office within a few days. This is a serious game changer for this vulnerable population.”

Little Hands has outgrown the original storage unit where it kept supplies and now operates out of a former preschool classroom at Second Baptist Church. Since the organization has grown so fast, Keeney hopes to bring on a part-time paid staff person to field requests and coordinate donation drives.

Lohmann to speak at Wintergreen

Bill Lohmann will speak at Wintergreen Resort about his travels around Virginia on Sunday, Dec. 29, 1-3 p.m., in the Crawford Room. Free and open to the public. Details: www.wintergreenresort.com/events-home/