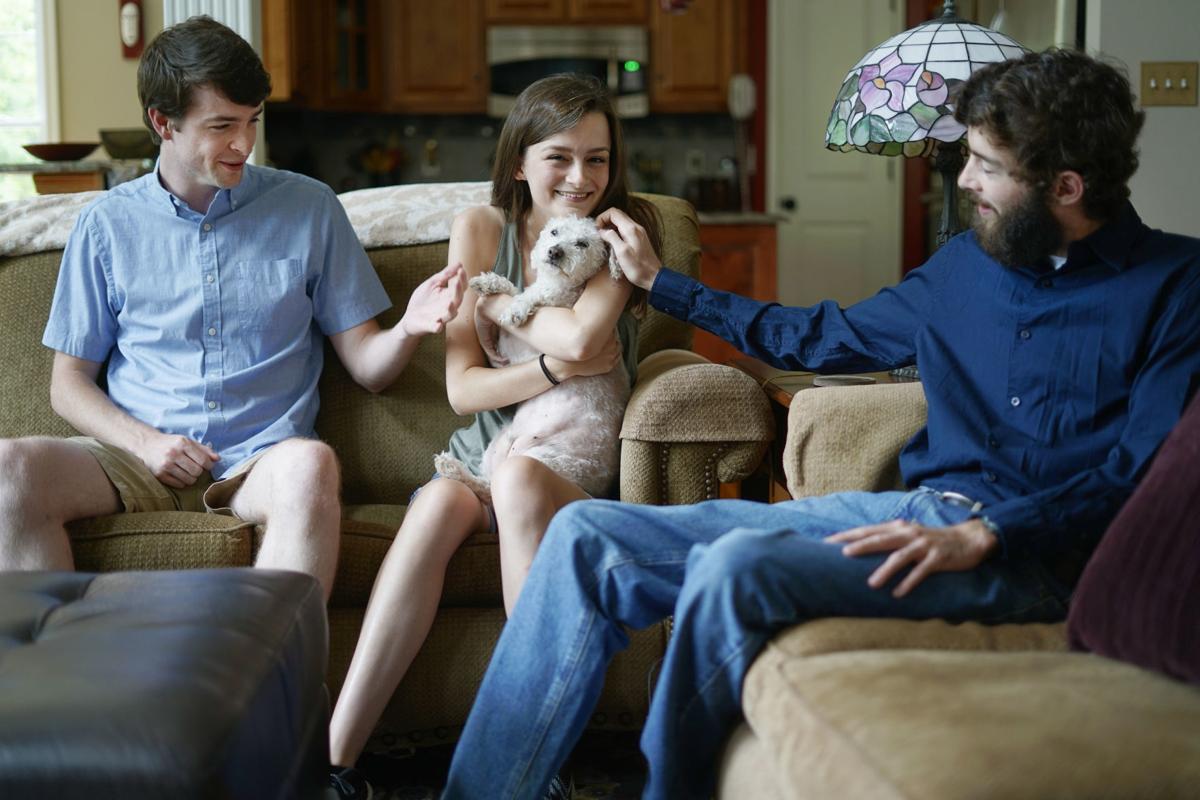 We first met triplets Matt (from left), Rachel and Brad Lowry, here playing with their dog, Willie, 22 years ago in a Richmond Times-Dispatch Father’s Day story about their grandfather James Lowry. Rachel recently reached out to the writer, Bill Lohmann, to tell him how much that story about their grandfather’s life and sacrifice means to the family. 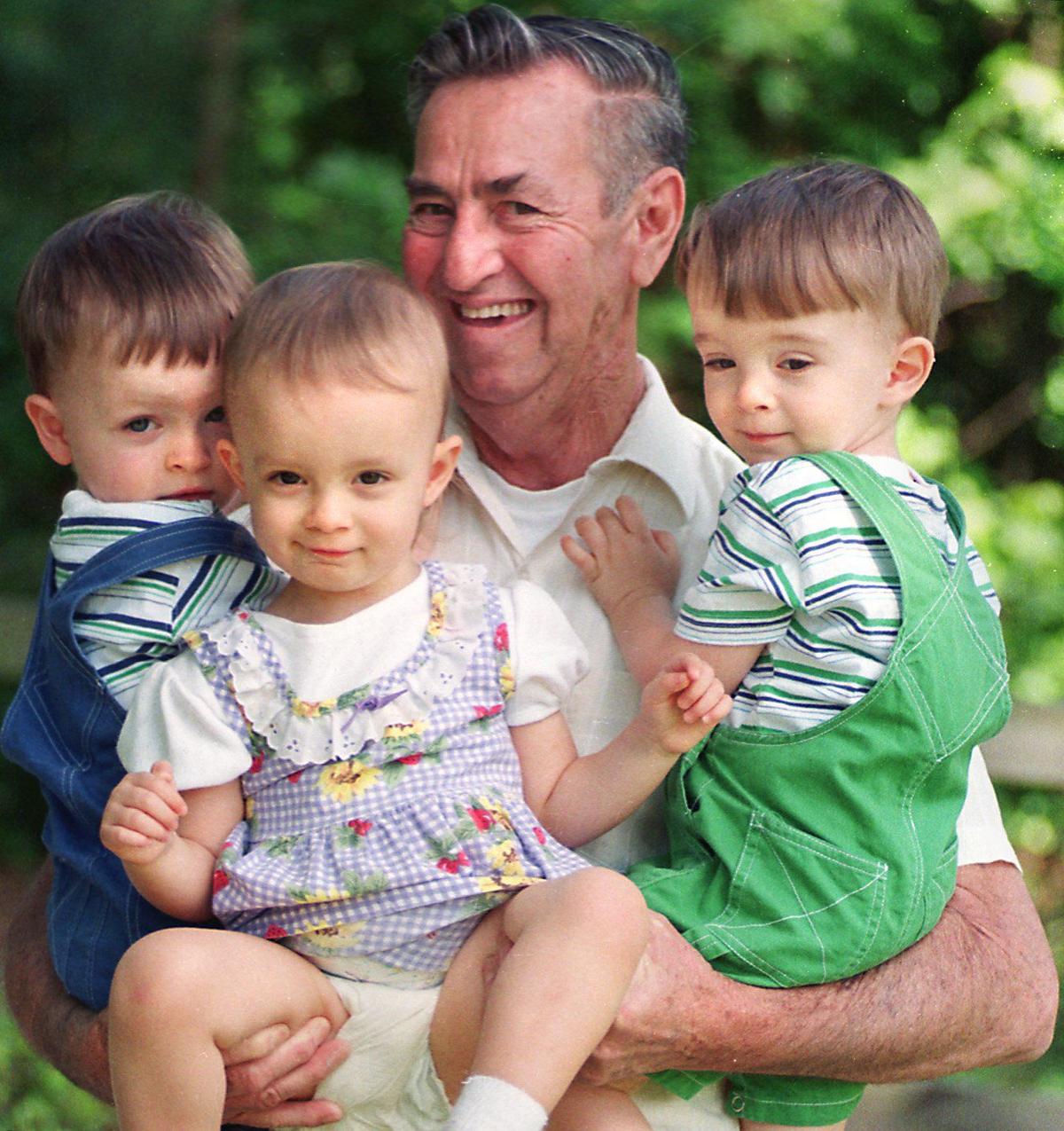 James Lowry had his hands full when he moved to Richmond to help care for his triplet grandkids, Matt (from left), Rachel and Brad. But he was up to the job. 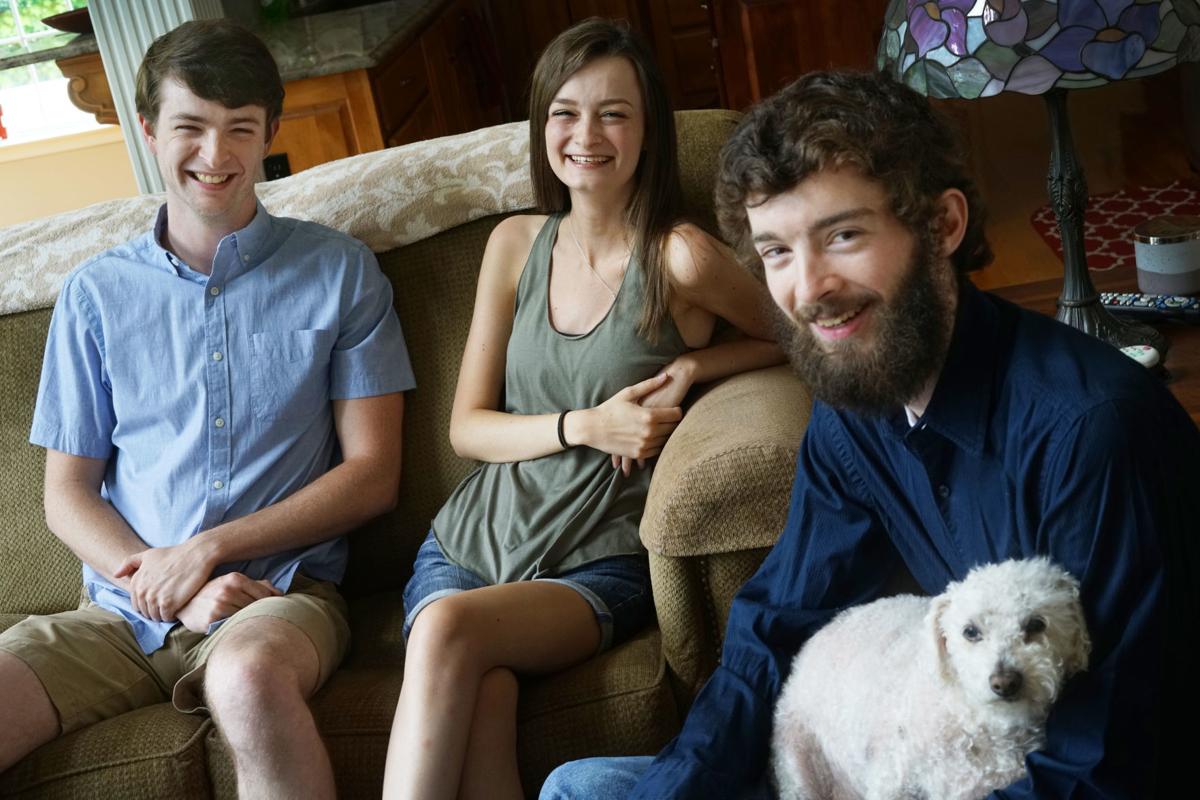 Lowry triplets Matt (from left), Rachel and Brad, now nearly 24, don’t have many vivid memories of their grandfather, who died in 2006, but they do remember well the love.

We first met triplets Matt (from left), Rachel and Brad Lowry, here playing with their dog, Willie, 22 years ago in a Richmond Times-Dispatch Father’s Day story about their grandfather James Lowry. Rachel recently reached out to the writer, Bill Lohmann, to tell him how much that story about their grandfather’s life and sacrifice means to the family.

James Lowry had his hands full when he moved to Richmond to help care for his triplet grandkids, Matt (from left), Rachel and Brad. But he was up to the job.

Lowry triplets Matt (from left), Rachel and Brad, now nearly 24, don’t have many vivid memories of their grandfather, who died in 2006, but they do remember well the love.

Over more than 40 years in this business, I’ve written thousands of stories, some I remember more fondly than others.

One of those was a piece I wrote for Father’s Day in 1998. It was about a grandfather who sold his home in Missouri and many of his belongings and relocated to Richmond so he could become the primary daytime caregiver for his triplet grandchildren while their parents worked.

Back at that time, it might have seemed a somewhat out-of-character undertaking for a man in his late 60s who had retired from the Post Office and before that the Army, where he served in Korea and Vietnam and was awarded a Bronze Star. But if you had spent a few minutes watching James Lowry engage with his then-not-quite-2-year-old grandchildren — shepherd three toddlers through playtime in the backyard, feed them lunch, settle them for naps — you would have come away believing he was not only the right man for the job but also one who was perfectly suited for it.

Or as he put it: “Most people don’t think a man can take care of three babies. But I didn’t worry about it. I know what to do.”

It turned out to be a sweet story, punctuated by an even sweeter photograph made by my colleague Dean Hoffmeyer, who at one point asked Lowry if he could hold all three grandchildren at once. Of course, he said, and then gathered them into his arms. Hoffmeyer looked through his viewfinder, everyone smiled and then, click — this was when photographers were still using film — and that was that. One frame. Perfect.

Which brings me to a message I received last month from Rachel Lowry — one of the triplets. She started off by saying she didn’t know if I would even remember the story, but that she wanted me to know “it is one of the most wonderfully written articles I have ever come across (although I may be a little bit bias).”

Rachel went on to tell me her grandfather died in 2006 after a few years of health problems. He had to stop keeping the triplets around the time they were 4 years old.

“Since I was only 10 when he passed, I didn’t really know too much about him as a person or much about his life,” she wrote. “Your article showed me just how brilliant of a man he was and told me stories about him that I didn’t even know. I keep a copy of the article in my room and pull it out to read whenever I want to remember him. You wrote a beautiful article that never fails to make me smile. Even better, you showed me the kind of man my grandpa was before he got sick and frail. I can’t thank you enough for reminding me how awesome he was and how good he was to my family.”

So, naturally, I called Rachel to tell her I did indeed remember that story and thought of it — and Hoffmeyer’s photo — often. She told me the picture hangs in the foyer of her family’s home.

She also brought me up to date on the three siblings. Rachel graduated from Randolph-Macon College with a degree in psychology and will return to school in the fall to become an X-ray technician. Matt and Brad, who did their undergraduate work at James Madison University, are already on to graduate work: Brad recently graduated with a master’s in accounting at JMU, while Matt is working on his master’s in bioinformatics at Virginia Commonwealth University.

When it came to child care, their grandfather was not at all inexperienced.

He grew up on a farm, the fourth of eight children in a family living in rural Illinois. His father died when he was 15, so he helped raise his younger siblings. By pulling together, he and his siblings helped keep the family together.

He later raised a son — Raymond, the triplets’ father — and two step-daughters.

Having three children — though not the same age — I marveled at his unflappable nature as he played with the kids, read to them and cooked for them. I said three energetic toddlers must have kept an old sergeant on his toes.

“They do, but I enjoy it,” said Lowry, who spent 22 years in the Army, finishing up at Fort Lee in the early 1970s. “They’re really not much trouble.”

I spent part of a day with them at the triplets’ Chester home. Lowry was a plainspoken man who kept things pretty orderly but fun. I noted lots of giggles and diaper changes and how, maybe most amazingly, he got them to take naps after lunch.

As Rachel mentioned in her note, the three of them don’t have a lot of vivid memories of their grandfather, but they treasure a few.

She told me about going out to dinner on Tuesday evenings when they were a little older. The destination was always O’Charley’s, and their grandfather always ordered the same thing: prime rib and black coffee.

“That’s where we first tried black coffee,” Rachel recalled. “It was disgusting! We were just 6 years old or something like that.”

Matt remembers his grandfather baking apple pies — he was a chef in the Army — and always making them laugh. Except for that one time when he did fuss at Matt “when for some reason I decided it was a great idea to pee on the bathroom wall rather than into the toilet — then brag about it. Not my brightest hour.”

Dawana Lowry, the triplets’ mother, said that when she was pregnant, Raymond asked his dad if he might be willing to move east and help with the new babies.

“He was like, ‘Oh, yeah!’” she recalled. “He was very excited and had no hesitation to come back and watch them.

His health decline began with eye ailments. He died in November 2006 at the age of 77. He is buried at Arlington National Cemetery.

As the family was making funeral arrangements, Dawana thought of the photo Hoffmeyer had made almost a decade earlier, contacted The Times-Dispatch and was able to acquire a copy that she framed and placed at the funeral home — the same photo of the smiling Lowry with an armful of smiling grandchildren that now resides in their home.

Said Matt Lowry, “I don’t really have many specific memories, but I remember him as being a very caring, strong man who loved us to death.”