Crews preparing to remove statue of J.E.B. Stuart from Monument Avenue in Richmond 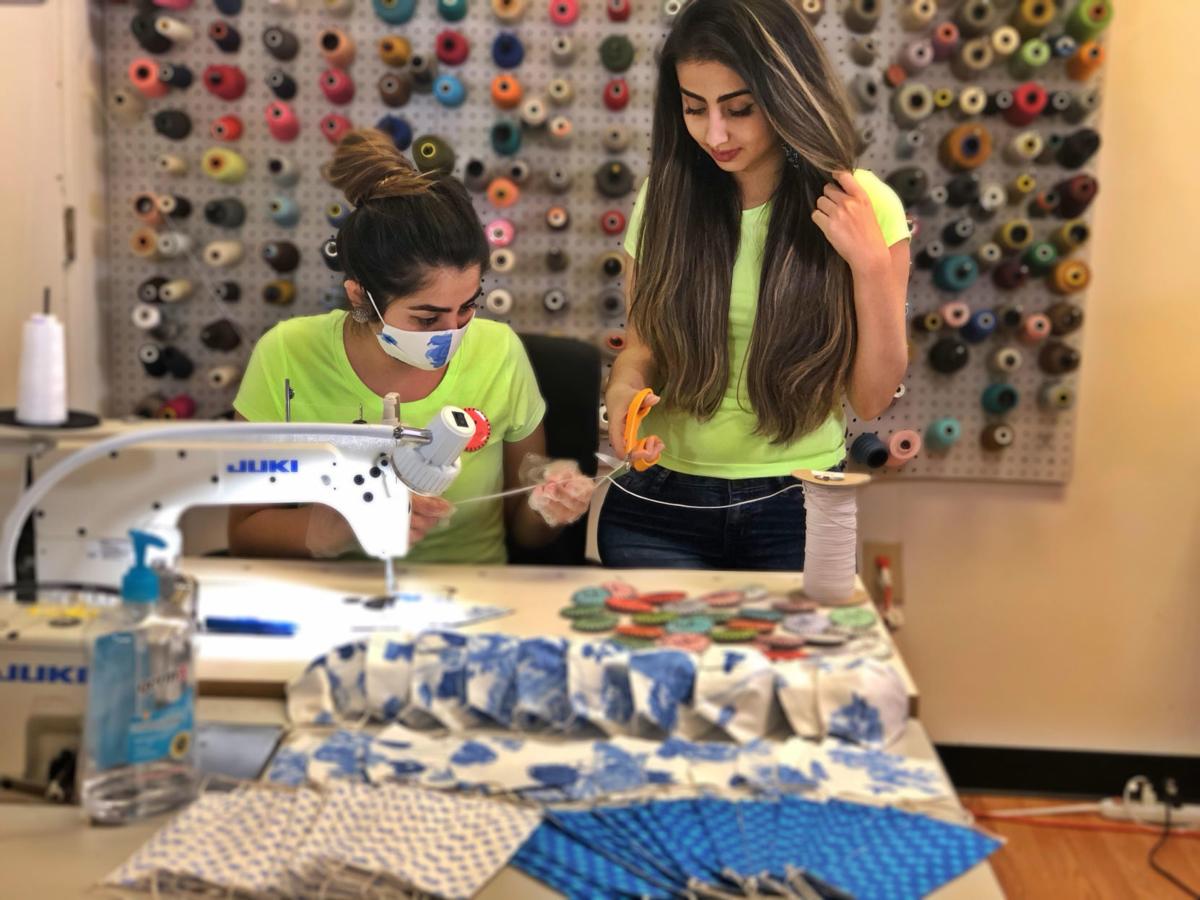 Wajma Soltan (left) and her sister, Axana Soltan, settled in the Richmond area following years as refugees after their family fled their native Afghanistan. They have created a nonprofit group, Enhancing Children’s Lives, to help kids the way they once were helped. 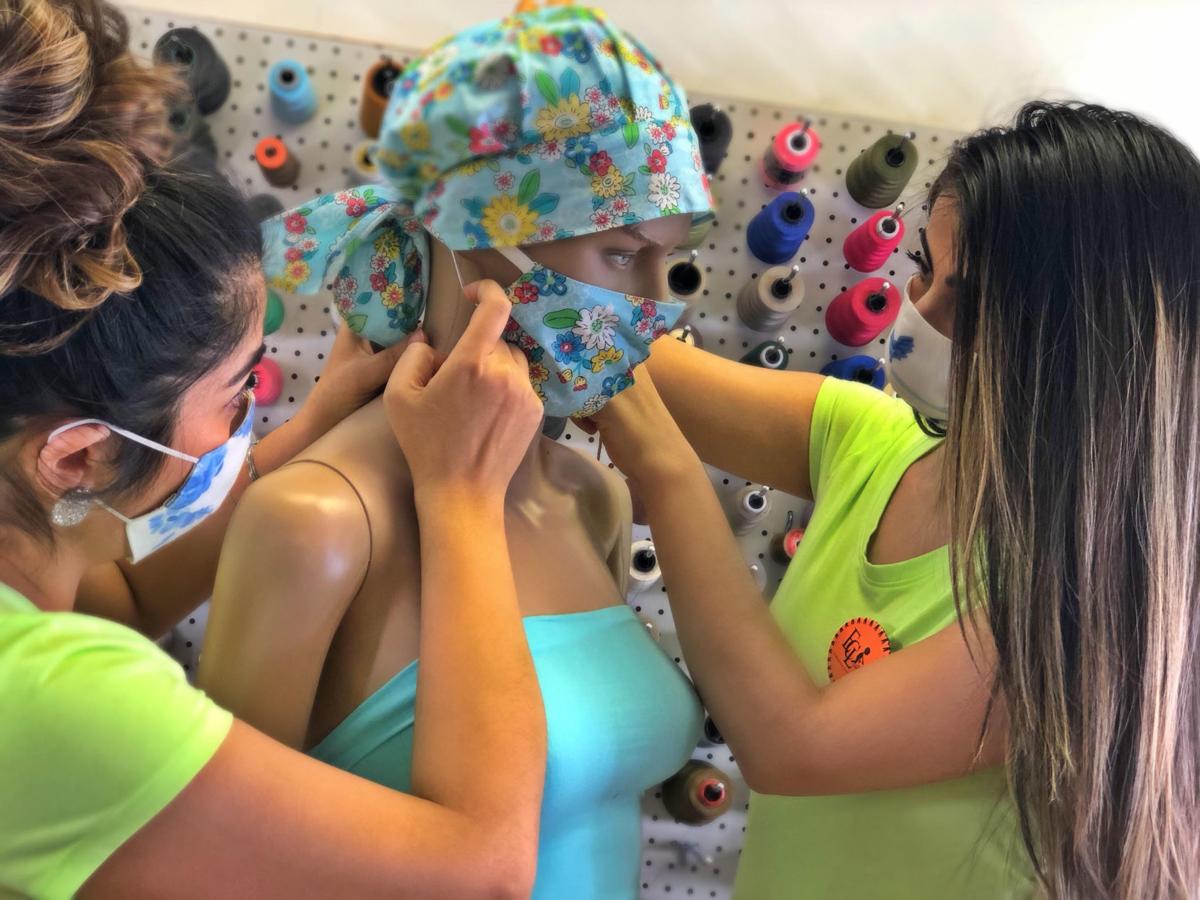 Sisters Wajma (left) and Axana Soltan, who created a nonprofit group to help children, pursue another project in their mom’s tailoring and fashion design shop in Chesterfield County: making face masks and mask-caps for cancer patients.

Wajma Soltan (left) and her sister, Axana Soltan, settled in the Richmond area following years as refugees after their family fled their native Afghanistan. They have created a nonprofit group, Enhancing Children’s Lives, to help kids the way they once were helped.

Sisters Wajma (left) and Axana Soltan, who created a nonprofit group to help children, pursue another project in their mom’s tailoring and fashion design shop in Chesterfield County: making face masks and mask-caps for cancer patients.

As their charity organization was cranking out masks as part of the battle against the coronavirus, Wajma and Axana Soltan got to thinking about their aunt in their native Afghanistan who has been contending with breast cancer.

They know how dangerous the coronavirus is for cancer patients, who are more vulnerable to such infection because of their compromised immune systems, so Wajma set about coming up with a way to further protect them.

Working in her mother’s tailoring and fashion design shop in Chesterfield County, she created a one-piece mask and cap combination for cancer patients undergoing treatment, particularly those who have lost their hair through chemotherapy.

“It just makes me happy I was able to do something to help them,” Wajma said.

The masks and mask-cap combos have been distributed around the VCU Health complex.

The mask-and-hat project is just the latest in a series of ventures organized by the Soltan sisters — Wajma is 26, Axana 23 — aimed at helping others. As teens, they founded a nonprofit organization, Enhancing Children’s Lives, despite the fact that their own lives as children were something less than enhanced.

“Both of them are the sweetest and kindest people with the biggest hearts,” said Michelle Overholt, a friend who was introduced to the sisters when she was a student at Virginia Commonwealth University. “They amaze me. I’m so proud of them for accomplishing so much in so little time. They certainly didn’t sit back and let life pass them by.”

The Soltans were 5 and 3 when their parents fled Afghanistan. Their parents — their father was an engineer and part-time teacher and their mother a teacher — lost everything in the Taliban takeover. Seeking a safe environment to raise their four children, Axana said, “They left everything behind.”

But that was only the beginning of a long, arduous journey, or as Wajma put it, “We escaped war, we escaped bombs, and there were times when we didn’t have food.”

They lived first in a refugee camp on the border between Afghanistan and Tajikistan, then moved into Tajikistan and Uzbekistan. After nine years, the U.N. Refugee Agency resettled them in Richmond, where they had relatives. They’ve been here more than a decade.

They arrived here speaking no English but remedied that soon enough. Axana now speaks five languages and Wajma four, having adapted wherever they’ve lived. Despite the initial language difficulties, they found Richmond welcoming, and they worked to fit in.

Wajma graduated from James River High, Axana from Midlothian High. Both went on to VCU, where they earned degrees and where Axana delivered a commencement address for the L. Douglas Wilder School of Government and Public Affairs.

In her 2017 commencement speech, Axana, who graduated with a degree in criminal justice, implored her classmates to “join me in my efforts to create a world that places human needs and human rights above all.”

Axana is a third-year law student at the University of the District of Columbia School of Law and hopes to become a criminal attorney.

Wajma, who has a degree in biology, aspires to be a pediatric cancer physician. She is also the author of three children’s books and is working on a novel, a story of an Afghan girl who lived under the Taliban regime.

They were inspired to start their nonprofit by the assistance they received from UNICEF and others during their time as refugees and even after they arrived in the United States.

“UNICEF helped us when we were struggling,” Wajma said, “and now we want to do what UNICEF was doing for us.”

Enhancing Children’s Lives has worked mostly in the Richmond area — providing tutoring and mentoring to youth at juvenile detention centers, hosting programs at homeless shelters and serving as volunteers for Richmond’s International Rescue Committee to provide emergency aid to refugees.

Among its global efforts, the organization has established a library for girls in Afghanistan to increase literacy among women and provided academic scholarships to children in Haiti.

Their friend Neha Patel, who first met Wajma in a chemistry class at VCU, has found her to be “determined in any task she undertakes.

“I remember how adamant she was about studying without taking breaks,” said Patel, who later met and worked with Axana, whom she describes as “fully committed to public service.”

Christopher Bennett also met Wajma in a class at VCU, and the sisters enlisted his help as they raised money to purchase backpacks for students at Richmond’s Carver Elementary.

At the onset of the coronavirus pandemic, Wajma began making the face masks, which evolved into the mask-and-hat combination for cancer patients.

Where did the sewing come from?

During their hard times as refugees, Maliah learned to sew, and Wajma learned from her.

After arriving in the United States, Maliah used her sewing skills to start a business, Lucy’s Divine Creations, a boutique where she is now more of a fashion designer than a seamstress, though she does alterations. Their father, Soltan, also works in the business.

“That’s what we love about this country,” Axana said. “It‘s the land of opportunity if you work hard and be true to yourself and be of service to others.

“We are living the American dream.”

To find out more about the organization or about the face masks and masks-caps, visit

What a wonderful heart warming story. They are first generation citizens here and have become a real credit to our country and all of humanity in general. We are so blessed to have such people here. Too bad more people are not like them. These girls are setting an example of what to be like. It is a shame they have had to witness what our dregs of society here stoop to! They build while others destroy!You just can't help but to love them!