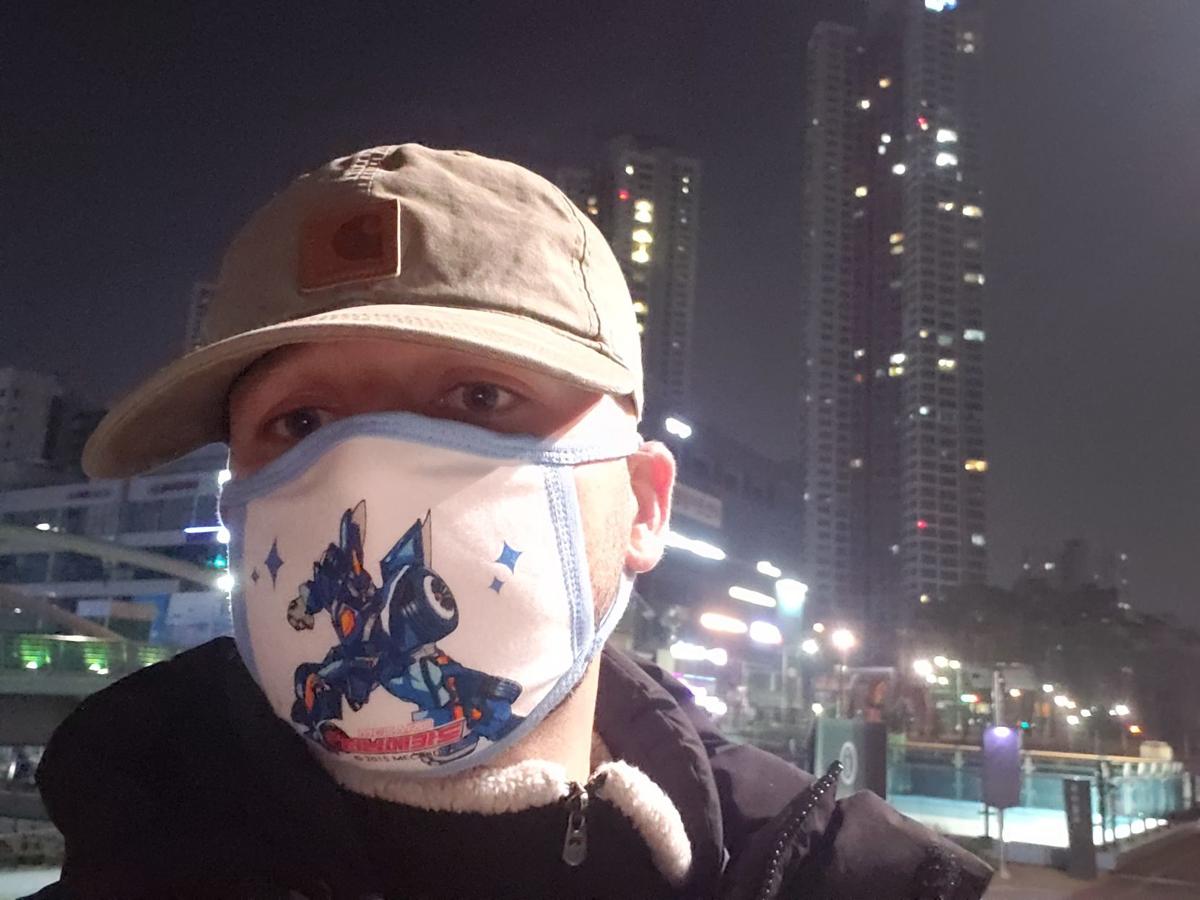 Hunter Mitchell, who grew up in Henrico County, took this selfie on March 18 in Cheongna International City, South Korea, where he was working as a teacher. 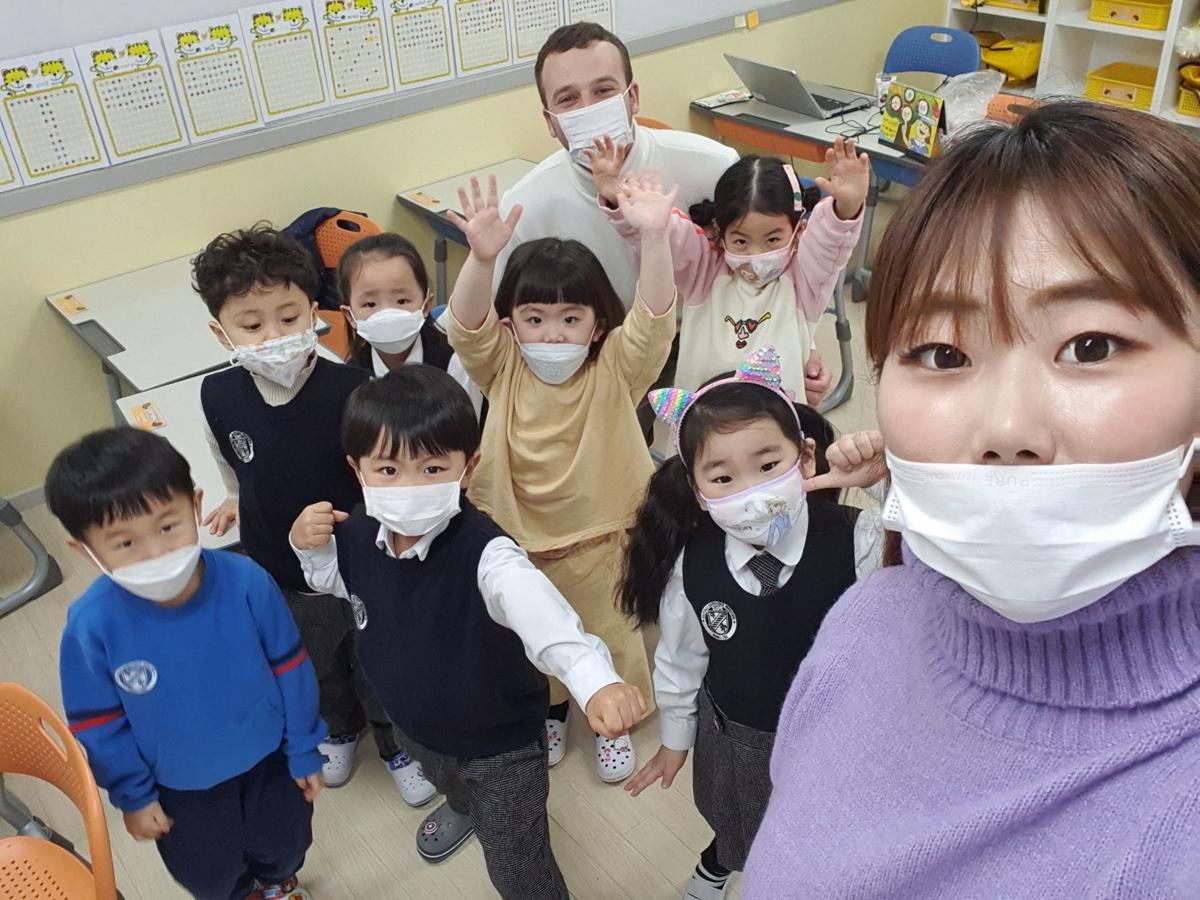 Mitchell (back) lost his job and his apartment when the private school where he was teaching closed. The 23-year-old will leave South Korea on Saturday to return to Henrico County.

As the coronavirus gripped South Korea, Hunter Mitchell, who was teaching English and geography to South Korean students, said he would go for bike rides at night on mostly empty streets in Cheongna International City. The private school where he was teaching has closed.

Hunter Mitchell, who grew up in Henrico County, took this selfie on March 18 in Cheongna International City, South Korea, where he was working as a teacher.

Mitchell (back) lost his job and his apartment when the private school where he was teaching closed. The 23-year-old will leave South Korea on Saturday to return to Henrico County.

As the coronavirus gripped South Korea, Hunter Mitchell, who was teaching English and geography to South Korean students, said he would go for bike rides at night on mostly empty streets in Cheongna International City. The private school where he was teaching has closed.

Being alone in a foreign country is an adventure all its own, but being there at a time of a pandemic is, well, something else entirely.

I reached my neighbor Hunter Mitchell last Wednesday in South Korea, one of the world’s early hot spots in the COVID-19 outbreak and where he’s been since December, teaching English and geography to young Korean students. In more recent times, he was quarantined for a couple of weeks, though he tested negative for the coronavirus.

It’s been quite the experience, he said: people in hazmat suits at a hospital taking his temperature (he had no fever or other symptoms for that matter, but his school insisted on the test after he took an early February trip to Japan to pick up a Korean work visa, which has to be secured from outside the country) and late-night bicycle rides, while wearing a mask, on mostly empty streets to an uncrowded convenience store to get food and supplies.

All the while, he’s been holding his breath that he doesn’t get sick in a place where he is not covered by health insurance.

Despite all that, his philosophy remains steadfastly grin-and-bear-it. Stuff happens, he said (sort of).

“I’m in no control of what happens,” he said from his apartment in Cheongna International City, just west of Seoul, “but I can try my best to adapt to it.”

Mitchell, 23, is someone my wife and I have known for a long time. He and our son, Jack, used to play together when they were little, and they would spend hours digging trenches in our backyard. “Environmental excavation,” as my wife fondly remembers it now.

“When I was a kid, I thought I could dig a tunnel from my backyard to yours,” he said with a laugh. “It kept us busy and out of the house.”

Mitchell graduated from Hermitage High School in 2015 and then last May from Penn State, where he majored in environmental geography with a focus in landscape ecology. (Maybe all that backyard digging paid off.)

Like a lot of his well-traveled generation, Mitchell is a seasoned explorer. During college, he went to Tanzania and South Africa for ecology projects (at a time when the Ebola virus was a serious concern in Africa). He also has spent time in Senegal, the Philippines, Japan, Dubai “and the Beijing airport.”

“I don’t know if Canada counts,” he said.

He wound up in Korea because he wanted to teach and travel before he embarked on graduate school. He was familiar with Japan, but he was impressed by what he saw of Korea when he visited there last fall: He liked the feeling of community though the individual expression was very strong; he liked how the nation’s transportation system is conveniently stitched together by rail, bus and bicycle trails; and he liked that Korea seemed to have a high demand for English teachers.

He arrived in December and was hired by a private school to teach English and geography to a variety of ages. One class was for 3- and 4-year-olds. He enjoyed their enthusiasm; they referred to him as “Hunter Teacher.”

But on Jan. 20, South Korea confirmed its first case of COVID-19. Since then, there have been more than 8,400 confirmed cases of the disease, including 84 deaths, though the country has won praise for its aggressive testing — more than 250,000 people have been tested — and has been cited by the World Health Organization as an example for other countries to follow. New cases have started to decline.

Mitchell has been impressed by the government’s transparency and by the way it has set up accessible testing facilities and sends out daily alerts about the latest cases, letting people know areas to avoid and how to prevent the spread of the virus, and has made masks available at neighborhood pharmacies. Hand sanitizer is everywhere, including elevators in apartment buildings. Businesses have curtailed their hours, but most have stayed open. Online shopping is big, he said, as is restaurant takeout and delivery.

“Grocery stores are still stocked with meat, produce and even toilet paper,” he said.

Mitchell was quarantined away from his students beginning more than a month ago, even though his COVID-19 test came back negative. The school shut its doors a short time later and has not reopened. Koreans working for temporarily shuttered businesses continue to be paid a portion of their salaries, but non-Korean workers, such as Mitchell, don’t qualify for the payments. He also is not covered by Korean health insurance.

“It’s a hard time being a foreigner here,” he said.

So he’s left his job at the school and lost his apartment, which was arranged by the school. He will spend this week surfing couches among friends — and social distancing from the greater public — until a flight back to the United States on Saturday.

Are you sure, I asked, you want to experience the height of a pandemic in two countries?

“Good point,” he said, but added: “I reckon I feel a little safer to experience hysteria with my health insurance and our local Lidl.”

But he would like to go back. He tentatively hopes to return to Korea in late May — if the coast is clear by then, viruswise — and continue teaching. His original plan was to live there until the summer of 2021.

If Korea doesn’t work out, he might try Japan or Singapore.

His long-term career goal is to be a professor of geography.

“So I think,” he said, “the experiences I have now, both good and bad, are integral to that goal.”

If there are 8,400 cases of confirmed Coronavirus and 84 people have died, they must be doing something more right than us with a 1% death rate!