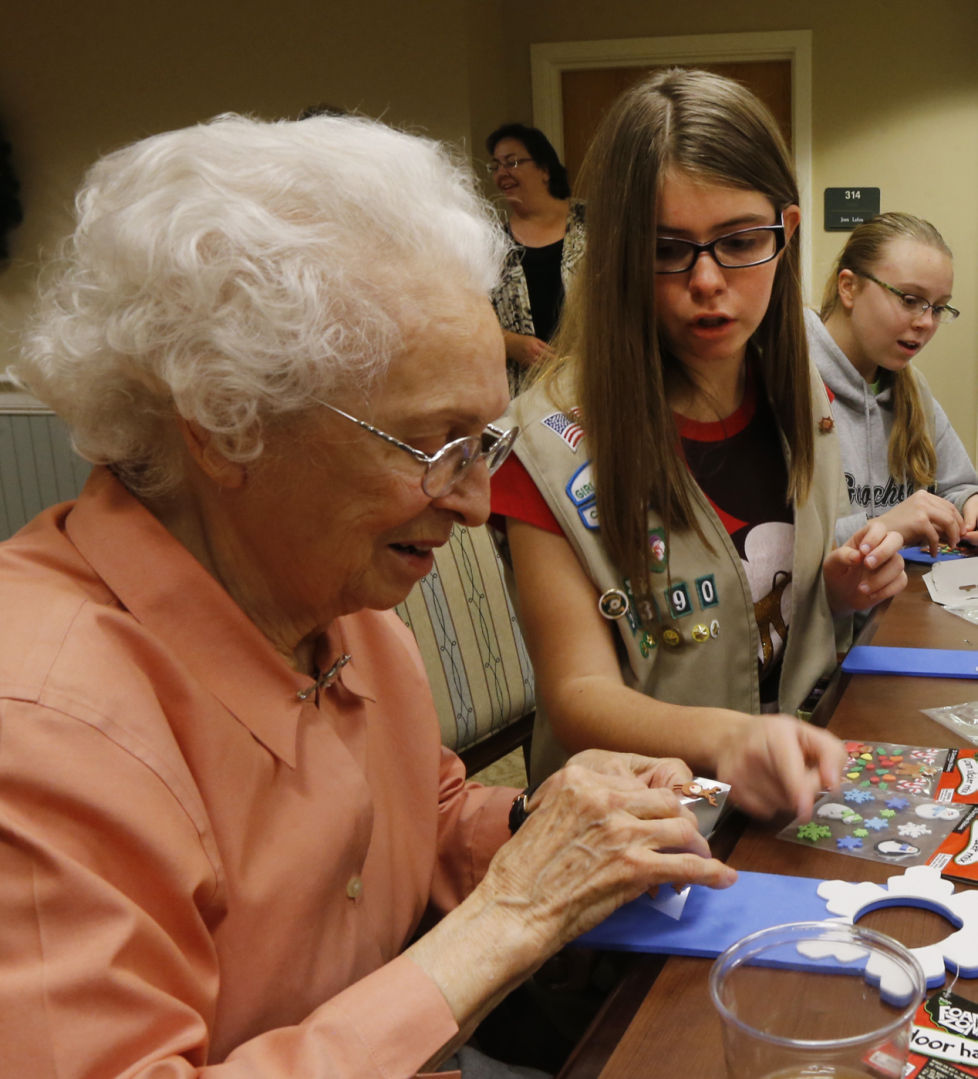 Resident Dottie Blake gets an assist from Girl Scout Sydney Butler, 12, in her door hanger. At right is fellow scout Jessie Steadman, 12. The Goochland Girl Scouts continue to read and visit residents of Lakewood Manor in Henrico County, far beyond their service requirements. Going on two years now the girls most recent visit had them helping residents make Christmas themed door hangers. 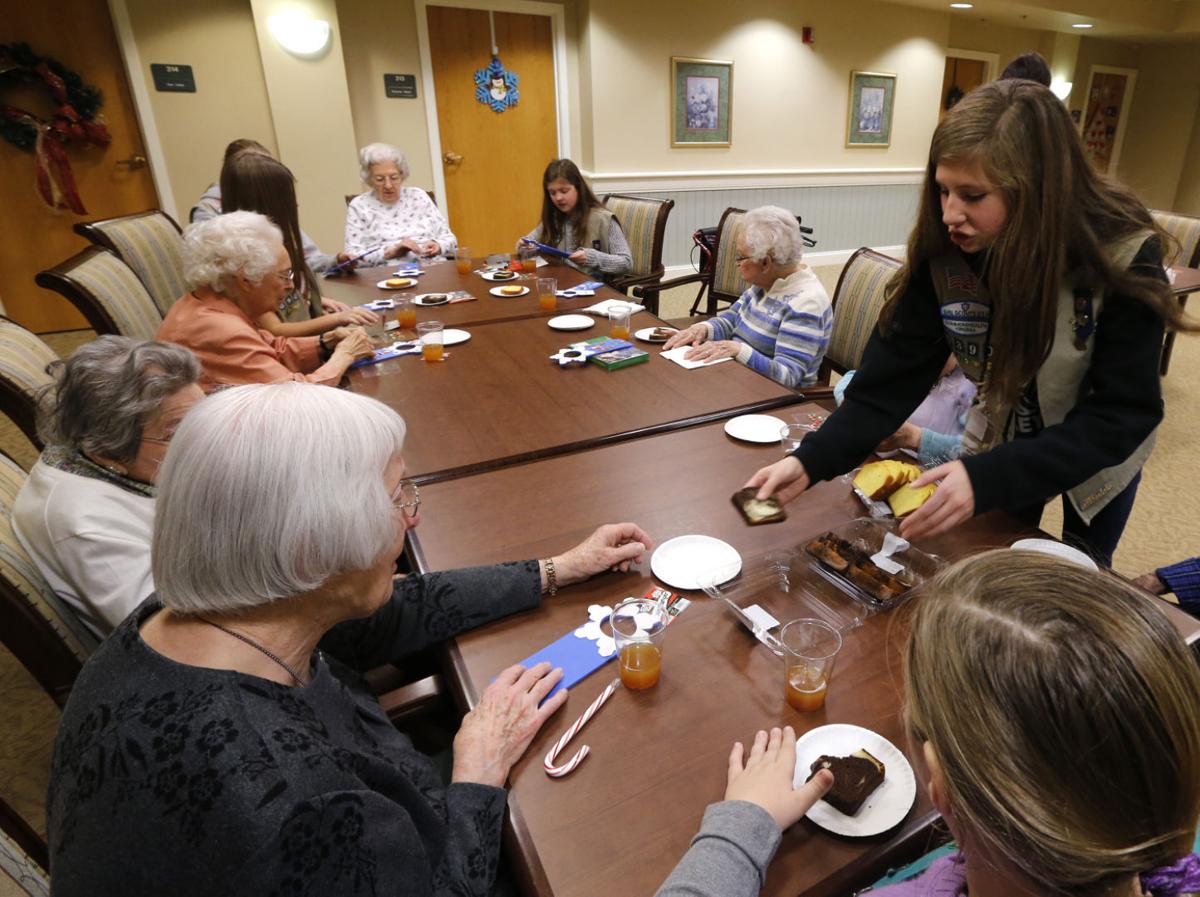 Resident Dottie Blake gets an assist from Girl Scout Sydney Butler, 12, in her door hanger. At right is fellow scout Jessie Steadman, 12. The Goochland Girl Scouts continue to read and visit residents of Lakewood Manor in Henrico County, far beyond their service requirements. Going on two years now the girls most recent visit had them helping residents make Christmas themed door hangers.

What started as a simple community service project blossomed into almost two years of friendship for a group of Girl Scouts and residents at a western Henrico County retirement community.

Each week, when the handful of Goochland County girls reach the common area of one wing of Lakewood Manor, they fan out to the 14 surrounding bedroom doors to invite their friends to join in the latest activity. On one recent visit, their activity was decorating door hangers for Christmas.

“But we really like playing bingo, too,” said Sydney Butler, 12.

Thelma Clark is almost always the first one to greet the group of five Girl Scouts. She’s the cheerleader for the girls and has convinced many residents to participate in crafts and games or just hang out.

February 2013 was the first time the Scouts ventured into the retirement community to earn their Bronze Award, the highest leadership recognition for Girl Scout Juniors. The idea was to read to a few residents until they completed the required 20 hours of community service.

But the girls quickly realized they had stumbled across something far less obligatory, and much more fulfilling.

“As we got to know the residents, it got more fun,” said Hope Sleime, 13. “It really makes an impact ... just making friends. Not because we have to. Just for fun.”

Lakewood Manor activities assistant Jody Simpson said the girls have shown the most initiative of any volunteer group at the assisted living facility. Staff involvement is minimal, she said.

“These girls are exceptional. They’ve gone beyond what is required of them to do and didn’t look to the staff to do any of it for them,” Simpson said, citing their weekly preparation and careful thought into each activity.

If Simpson inadvertently plans an activity during the same time as the Girl Scouts, the residents are quick to point it out. “This might be the only one I can think of that has continued with the consistency this group has.”

During their hourlong sessions once a week after school, the girls usually get a lesson in history about the things they have only vaguely studied in school. When the group put together a “Jeopardy” game with categories based on popular culture divided into decades, a simple question from the 1960s brought about an eye-opening story, said Hope’s mother, Melanie Sleime.

“The question was, ‘Who gave the now-famous “I Have a Dream” speech?’ ” Sleime said. “One resident, after answering, said, ‘I was there.’ ”

The resident went on to share her story about her participation in the March on Washington in 1963 as a white woman and her subsequent interview with David Brinkley, a prominent TV newscaster, along the march route.

“We connect with a different generation and hear what they’ve been through,” said Charlotte Dryden, 13.

H.R. Coates, the only man on a floor of 14 residents at Lakewood Manor, has shared many stories about his tours abroad during World War II and will often show the girls his wartime photo albums.

Usually he sticks to working on his latest puzzle instead of joining in the activities, but this particular week, among the three tables it took to fit everyone, he changed his mind.

The girls and a few of their mothers passed out cake with apple cider while everyone caught up and discussed their Christmas plans. Before long, someone suggested playing bingo.

“If we didn’t have this impact, they’d be sitting around on their Tuesday afternoons,” Sydney said. “This is our fun thing to do, too.”

Making A Difference: Susan Farrell practices the 'ministry of availability'

Our annual "Making a Difference" series, which highlights the work of everyday people doing extraordinary work in the community, continues today. Readers nominated dozens of individuals whose work is improving the lives of others.

Online: Look for stories and photos of people making a difference at Richmond.com.