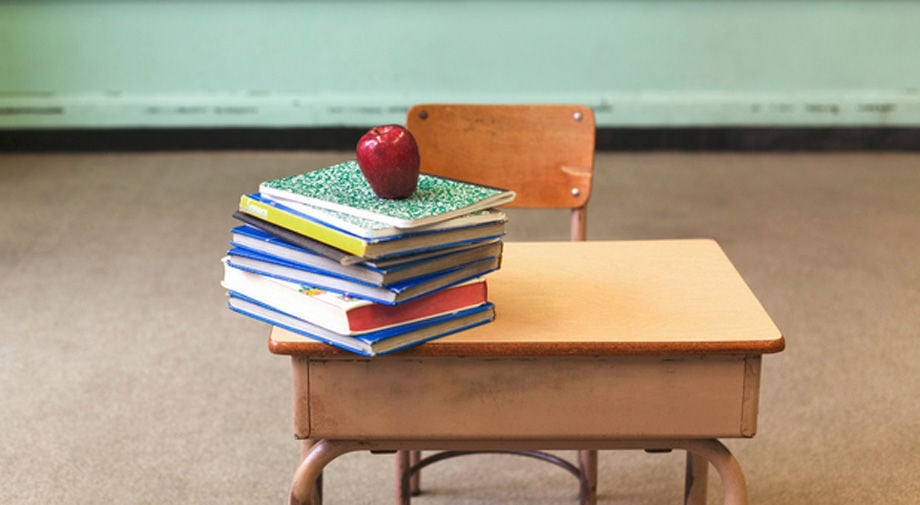 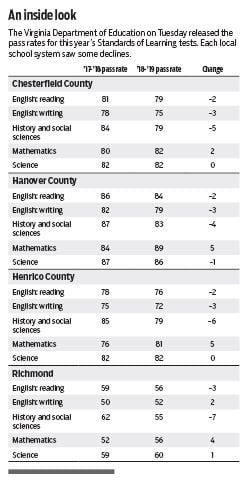 Richmond-area students fared worse than they did last year on many state accountability tests, statewide scores released Tuesday show, as performance across the state dropped slightly.

The share of Virginia public school students who passed tests in five core subject areas fell compared with 2017-18 rates, according to results published online by the Virginia Department of Education. The largest drop was history, where students scored 4 percentage points worse than they did last school year.

In reading, 78% of state students passed the Standards of Learning tests compared with 79% in 2017-18. Writing saw a slight drop from 78% to 76% while science performance stayed virtually the same at an 81% pass rate.

State math scores improved 5 percentage points from 77% to 82% in the first year of new math SOLs, which were approved by the state Board of Education in 2016.

“The achievement in a school, a division or in the commonwealth as a whole must be viewed in the context of these changes in student test-taking patterns, standards and assessments,” Superintendent of Public Instruction James Lane said in a statement. “These changes were significant and performance on last year’s SOL tests marks the beginning of new trend lines in mathematics, science and history.”

Despite the statewide drop, more than 3 in 4 students passed in all five tests, according to the data, which showed an average statewide dip of 0.75 percentage point.

Richmond again ranked among the lowest-performing systems in the state, with pass rates below the state average in every test area. The district did have gains in three of the five test areas, with the biggest improvement coming in math, where 56% of test-takers passed this year compared with 52% last year.

The city school system took a hit in history, falling from a 62% pass rate last year to 55% this year.

“We’re excited to see the growth in mathematics, science, and writing, but of course disappointed by our reading and history scores,” Superintendent Jason Kamras said. “But this is a marathon, not a sprint. We need to continue to build momentum, week by week, month by month, year by year.”

Richmond was the only local school district to see gains in more than one subject.

Like Richmond, Chesterfield saw a decrease in the number of students passing the history tests (79% this year compared with 84% last year). Math was the only area in the county to improve (80% to 82%).

“It continues to be important that we don’t judge student achievement based on a single test score,” School Board Chairman Rob Thompson said in a statement. “A child’s success is better measured by how much they grow academically during the course of a single school year.”

Henrico County was below the state average in four test areas — reading, writing, history and math.

“We feel it’s important to measure our performance, celebrate successes and acknowledge where there are areas for growth,” said district spokesman Andy Jenks. “But we’re also mindful that standardized tests represent a snapshot of a moment in time.

“To us, it’s also meaningful to support students as they grow academically, socially, and emotionally over time as we prepare them for life after high school.”

Hanover County had the highest pass rates in the area and was the only local school system to eclipse the state averages in every test subject.

“While we are pleased to learn that our students’ overall performance remains high, we recognize that our work is never done,” said school system spokesman Chris Whitley. “We remain committed to meeting the unique academic and socio-emotional needs of all learners to help ensure they reach their fullest potential. We will continue to evaluate the alignment of our resources, curriculum, and professional development efforts to help close achievement gaps further.”

Only one of Richmond’s seven middle schools — Binford — saw gains this year and Albert Hill remained the highest-achieving middle school with a 72% average pass rate. Martin Luther King Jr. Middle saw a 3.8 percentage point decrease and remains woefully behind its peers with a 25% pass rate.

Three in five of the city’s comprehensive high schools had their scores drop. Thomas Jefferson High School still has the highest pass rate of the five at 64%.

Fairfield Court Elementary School had the largest drop among city schools again this year, with its average pass rate across the four tests it administers declining 25 percentage points. The school has gone from having an 81% pass rate in 2016-17 to 21% this year.

The largest gains in the city were made in science at Westover Hills Elementary (24% to 65%).

Kamras, the Richmond superintendent, said the district is adopting new reading and math curricula over the course of this year, among other things, in an effort to improve student achievement.

“I remain boundlessly optimistic about our future and can’t wait to start the 2019-20 school year,” he said.

The state implemented the Standards of Learning program in the mid-1990s after ineffective reform efforts and steep declines in student achievement on “The Nation’s Report Card.” SOL testing started in 1998 and has been made more rigorous by the Virginia Board of Education.

Virginia allows parents to opt their students out of taking SOL tests in elementary and middle school. There is no consequence to a student’s academic standing or advancement to the next grade if they don’t take the test. The tests start to matter on a student level in high school, when a student must pass the tests to graduate.

When a student doesn’t take an SOL test because of an opt out, the score is reported as a “0,” meaning it could affect a school’s accreditation rating and overall passage rate. How many students opted out of the tests was not part of Tuesday’s data release.

The scores don’t affect a school’s accreditation rating as much as they once did.

In 2017, the state Board of Education updated its accountability system in an effort to rate schools on more than just test scores.

Last year was the first year elementary and middle schools were evaluated on proficiency and growth in English reading and writing achievement, including the progress of the state’s English language learners, as well as performance in math and science.

Achievement gaps in English and math, along with absenteeism, are now also used to evaluate those two school types.

The ratings for high schools depends on similar factors, but also includes schools’ graduation rates and dropout rates. Starting in 2021, a school’s ability to prepare students for college and careers will be weighted in the rating.

The board also revised graduation rules so students need fewer SOL tests in order to graduate, although course requirements for both advanced and standard studies diplomas remain the same. Those took effect with last school year’s freshman class.

School ratings will be released toward the end of September.

SOL results can’t be used to judge academic performance against other states because they’re unique to Virginia. Rather, the National Assessment of Educational Progress, which is known as “The Nation’s Report Card,” is administered to students in every state to make judgments across state lines.

According to the results of last year’s NAEP — it’s administered every other year — Virginia public school students are above the national average.

'It’s important we get reading right for kids': More than 1 in 4 Va. students are falling behind in reading

The School City Council is only worried about changing the names of schools...they could care less about the children and low SOL scores!!!!

Raise the taxes, change the name of the schools and diversify, that will be the answer. Forgot, take down a couple monuments, that will surely solve ALL the problems. Elephant in the room.

And I will be the one to say it. This school system is entirely run by the Democratic Party and they get elected into HENRICO County Schools system and now they are systematically destroying our school system also. To the voters of Richmond do you really believe Presidents Trump is responsible for these results ?its the broken homes and the people who are elected

Try something different ….. like throwing mo money at it, and maybe giving the students more say could help tremendously. Hallelujah, and period.

Yea it’s the lack of money let’s raise the meals tax to 20 cents. That is the problem right.

Right to the point any parent that sends their children to Richmond Coty Schools must expect failure. The people voted for failing schools period the Democratic party tells you the reason is because the name of the schools—- I got news it’s the broken homes absent parents and single parents who struggle with a full time job and helping their children with homework. Look at the PTA enrollments.

"The city school system took a hit in history, falling from a 62% pass rate last year to 55% this year.".......Time for a school voucher system in Richmond, parents, students and taxpayers have suffered too much and for WAY too long with Richmond's third world education system, while charging BIG money, and delivering a garbage.education

They even failed when they took out the civil war.

The scores improved in math.....only after the tests were changed!

Richmond scores will not improve until parents take a more active interest in the education of their children..