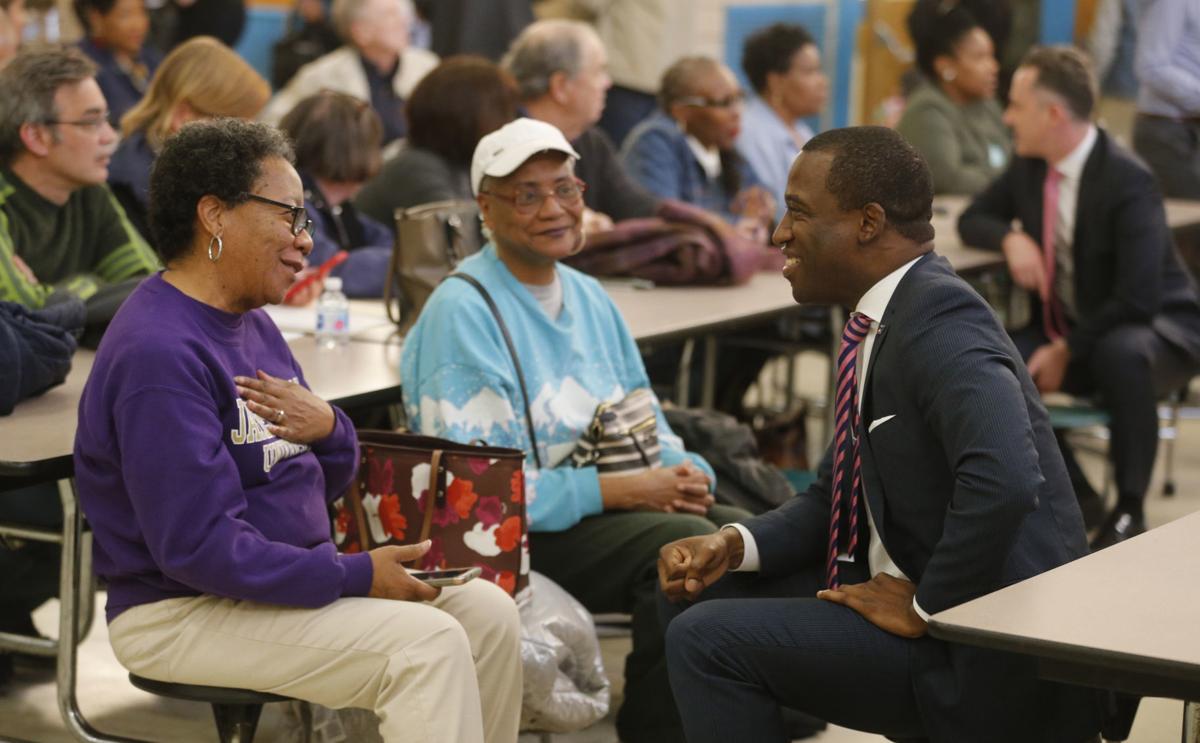 Mayor Levar Stoney talks with Barbara Palmer (right) and Deborah Driver at a town hall on his budget plan. He wants to raise taxes to give more money to Richmond schools. 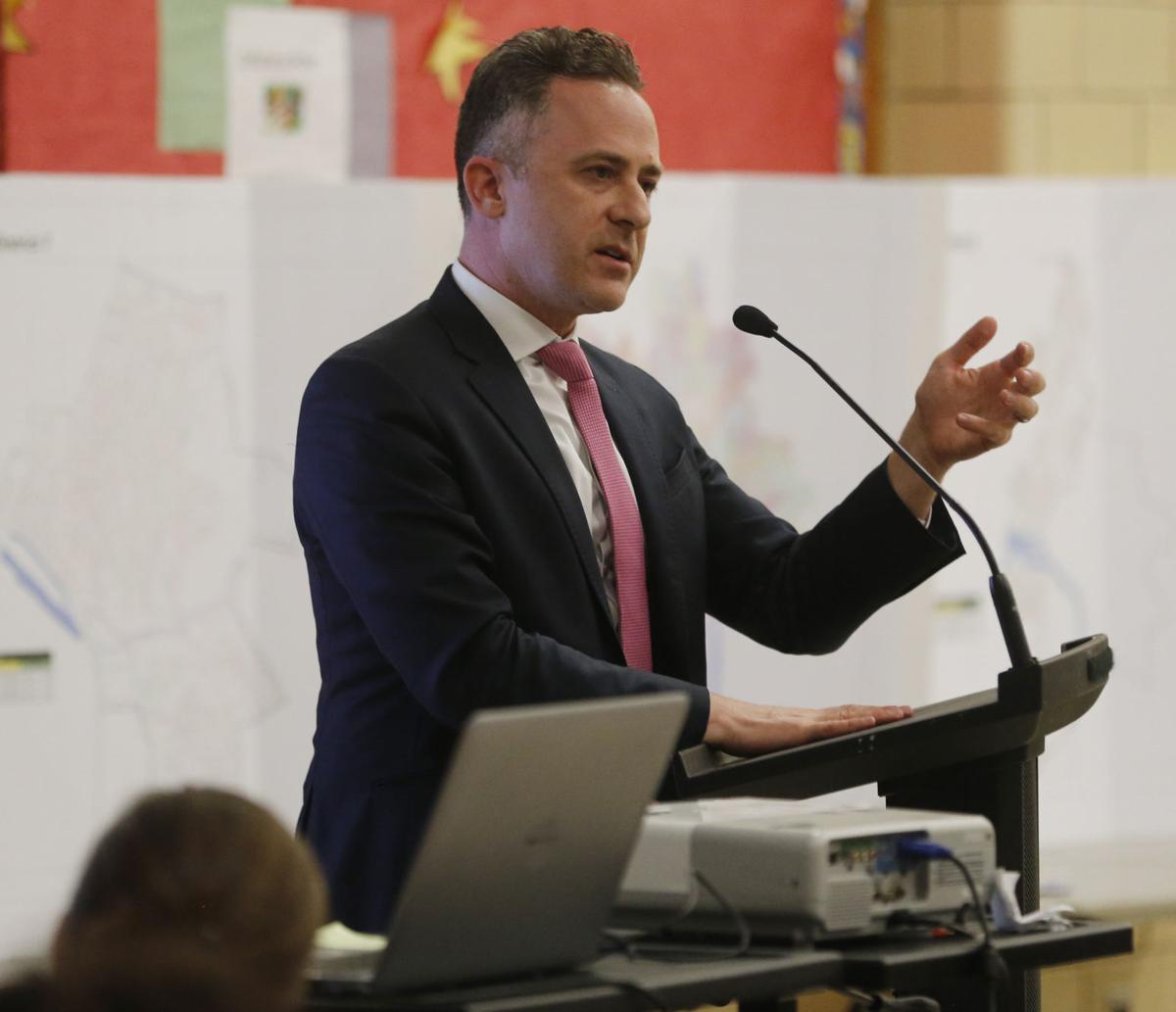 Mayor Levar Stoney talks with Barbara Palmer (right) and Deborah Driver at a town hall on his budget plan. He wants to raise taxes to give more money to Richmond schools.

The Richmond City Council has agreed to fully fund the second year of a turnaround plan created by the city school system at a cost of roughly $12 million. Now comes the expensive part.

Richmond Public Schools’ five-year strategic plan — dubbed “Dreams4RPS” — is projected to cost $150 million in total, with costs escalating annually. By the final year of the plan, the district would need $58.1 million more in recurring money than it had this year; Superintendent Jason Kamras and Mayor Levar Stoney want the state and private donors to help fund the proposal.

There’s work to do. RPS has the lowest graduation rate in Virginia, and only 19 of the district’s 44 schools meet the state’s full standards for accreditation. The strategic plan, created last year after more than 170 community meetings, would drastically shake up curriculum, secure new technology and invest more in teachers.

Kamras and Stoney have used the plan to push the City Council for more school funding, amid mounting advocacy from a schools community that has increased its activism in recent years. Dozens of education advocates turned out to City Hall on Monday night for the public budget hearing, waving signs supporting Stoney’s proposed 9-cent increase to the city’s real estate tax in order to give the school system more money.

“That was a signal that schools are a priority,” said Kristen Larson, who represents the 4th District on the council. “We have a lot going on in the city, and we need to be mindful of all of these issues and how they impact our city, but I think what happened on Wednesday was huge.”

On Wednesday, after Monday’s public hearing, several members of the body who had put forward cuts to the school system’s proposed budget withdrew those amendments, preserving the city’s share of a state-approved teacher raise and the strategic plan. Council members will still have some oversight of the plan, choosing to put the money for Dreams4RPS into a special fund that will require budget amendments throughout the year for the school system to receive the money.

The body is aiming to keep the money in the budget while also opposing Stoney’s proposed real estate tax hike, but escalating needs will put pressure on the council again next year.

The cost of the plan increases at least $12 million every year before totaling $58.1 million in 2022-23, when Kamras has pledged that every school in the district will meet the state’s full accreditation standards.

Local taxpayers have helped pick up the tab the first two years with an increase to the meals tax last year paying for three new schools and higher assessments this year leading to more revenue for the city. This year, taxpayers also are facing the potential for the real estate tax rate increase and the implementation of a cigarette tax, in part to cover the plan and give more money to RPS.

Kamras and Stoney hope future years of the plan can be paid for in a different way.

“It’s our hope that the commonwealth of Virginia will step up their funding of Richmond Public Schools and philanthropic dollars will also be sought,” Stoney said.

The most expensive part of the plan, which was unanimously approved by the School Board in September, comes from improving the teaching and learning inside city schools, which the district estimates will cost $91.9 million.

Thirty percent of that cost comes from a drastic shake-up in how the district does secondary education, changing three high schools and middle schools — an especially underperforming area in the district — into themed schools that would focus on such topics as science, technology, engineering and mathematics, or STEM, and international affairs.

The plan also includes proposals to raise teacher salaries in the district’s high-priority schools starting in 2022-23 ($2 million), increase the number of mental health positions and add more nurses in schools ($3.5 million) and expand the Welcome Center for immigrant families ($640,000).

“We have a plan, so fund it,” School Board Chairwoman Dawn Page said in an interview.

The School Board did not know the total cost of the plan when its members voted on it last fall, instead receiving estimates in early December. Third District board member Kenya Gibson, who voted for the plan, said “it’s important to vet a plan with costs in mind,” especially with a proposal to raise the real estate tax rate on the table.

“Our schools remain dramatically underfunded, so I do hope we have more funds to work with,” said Gibson, who asked for the costs before the September vote. “I also recognize the ask is steep.”

Larson, who said she gets “a lot of heartburn” thinking about funding the next few years of the strategic plan, said the School Board should review the last three years of it now that it knows the cost.

“There’s a fiscal obligation there,” she said. “Voting on something and not knowing the cost until three months after is not a good approach for a plan of this magnitude.”

City taxpayers pay 29 percent more for Richmond Public Schools than they did a decade ago, as the local share of the budget has risen to compensate for a drop-off in state funding during the Great Recession.

The state pays 19 percent less per RPS student than it did in 2009, thanks to a round of recession-era belt-tightening measures that state lawmakers are working to unwind, with proposals to improve transportation and give state employees raises.

About 43 percent of the division’s budget now comes from the state. The city’s share — 56 percent — is 7 percent higher than it was at the start of the Great Recession.

Stoney acknowledged that the school system will need more money for the strategic plan in the future while again backing his proposal to raise the city’s real estate tax rate 9 cents — a plan no council member currently supports.

Kamras, an ally of Stoney’s, has said he will take any money people want to give the district, but hopes the state will bolster the plan.

“There is an enormous opportunity for the state,” Kamras said. “We’ll be watching very closely with the elections in November what happens with the [General] Assembly. I do think if there is some different leadership there, then there is an opportunity for a much more significant investment from the state.

“That, along with the city’s hopeful investment this year, and philanthropy, we should be able to get pretty close to what the numbers are.”

" RPS has the lowest graduation rate in Virginia, and only 19 of the district’s 44 schools meet the state’s full standards for accreditation." More money will fix this? Where's the data?

They will raise the meals tax to 20 cents..... a Condom Tax is on the way and they will print fake money at City Hall

And as predicted RPS wants more and more and more money for their failing system. And notice they say nothing about ensuring that graduation rates or test scores will increase. As long as they get their money they do not care how high taxes will rise. The money pit in Richmond goes by the initials RPS.