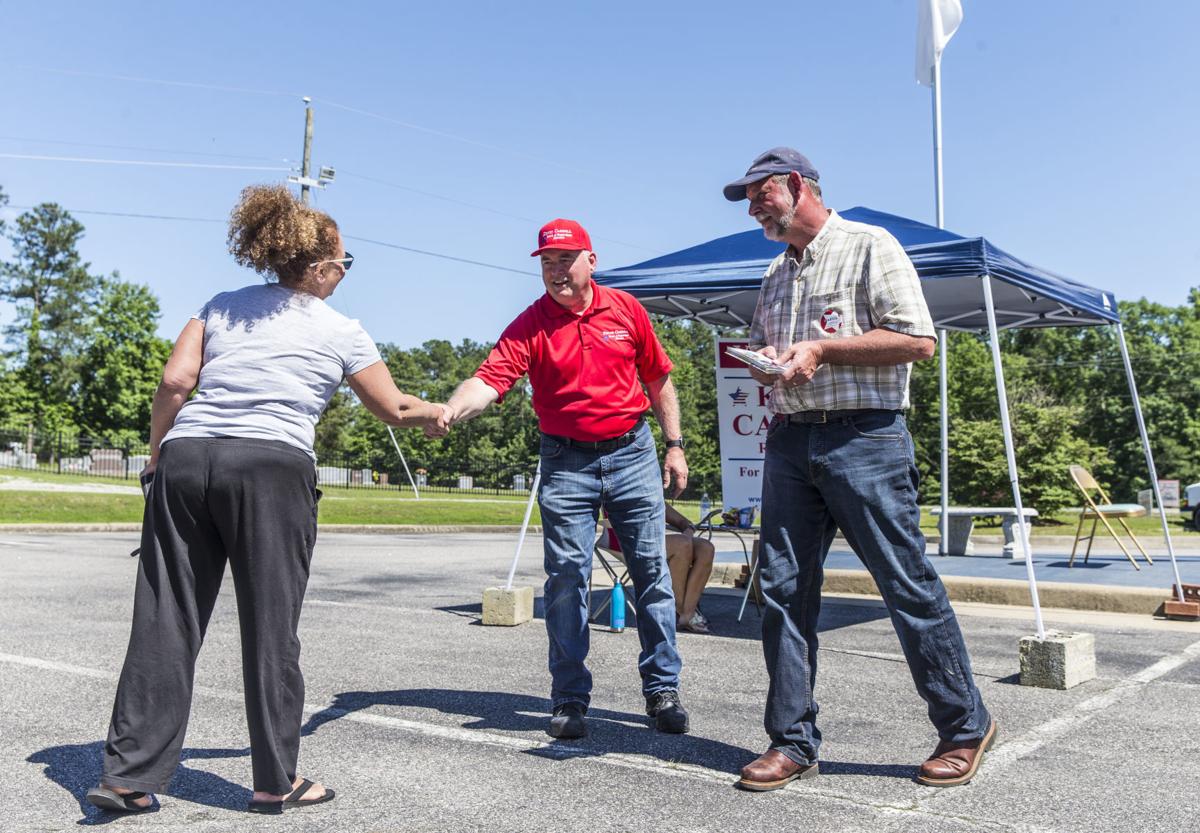 Kevin Carroll (center) and Craig Stariha campaigned Tuesday at Chesterfield Baptist Church. Carroll won the GOP primary for the Matoaca seat on the Chesterfield County Board of Supervisors, according to unofficial tallies. 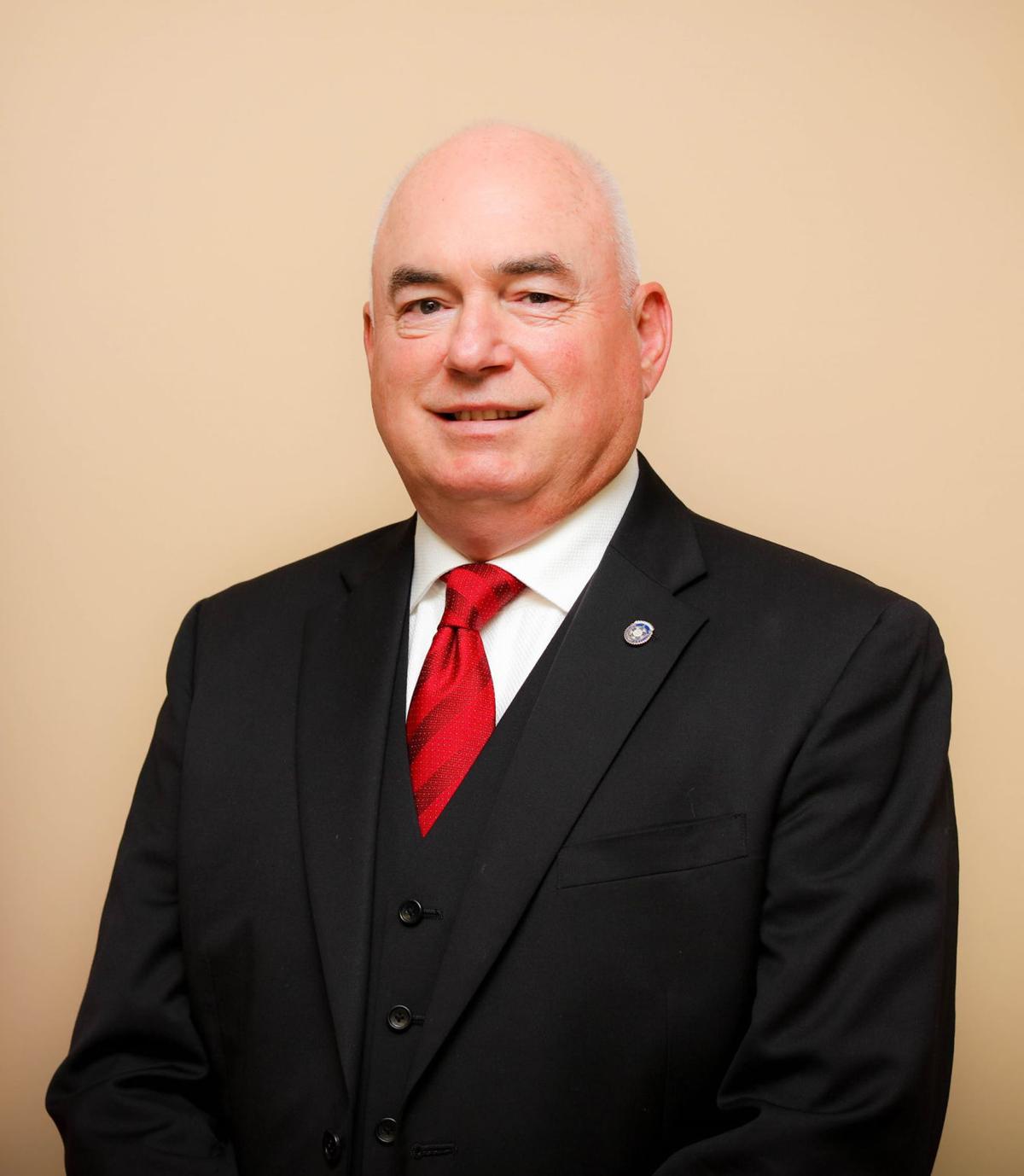 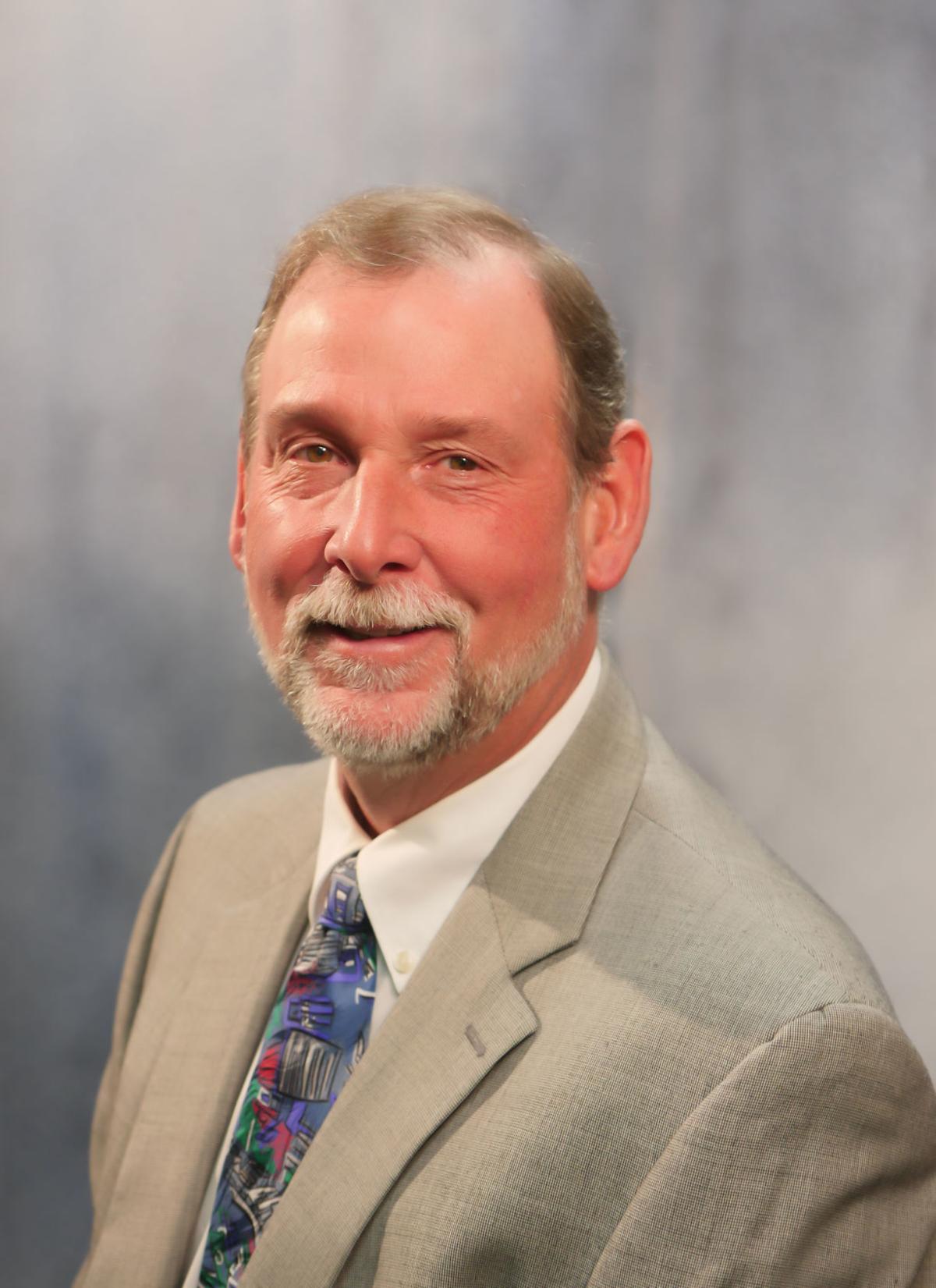 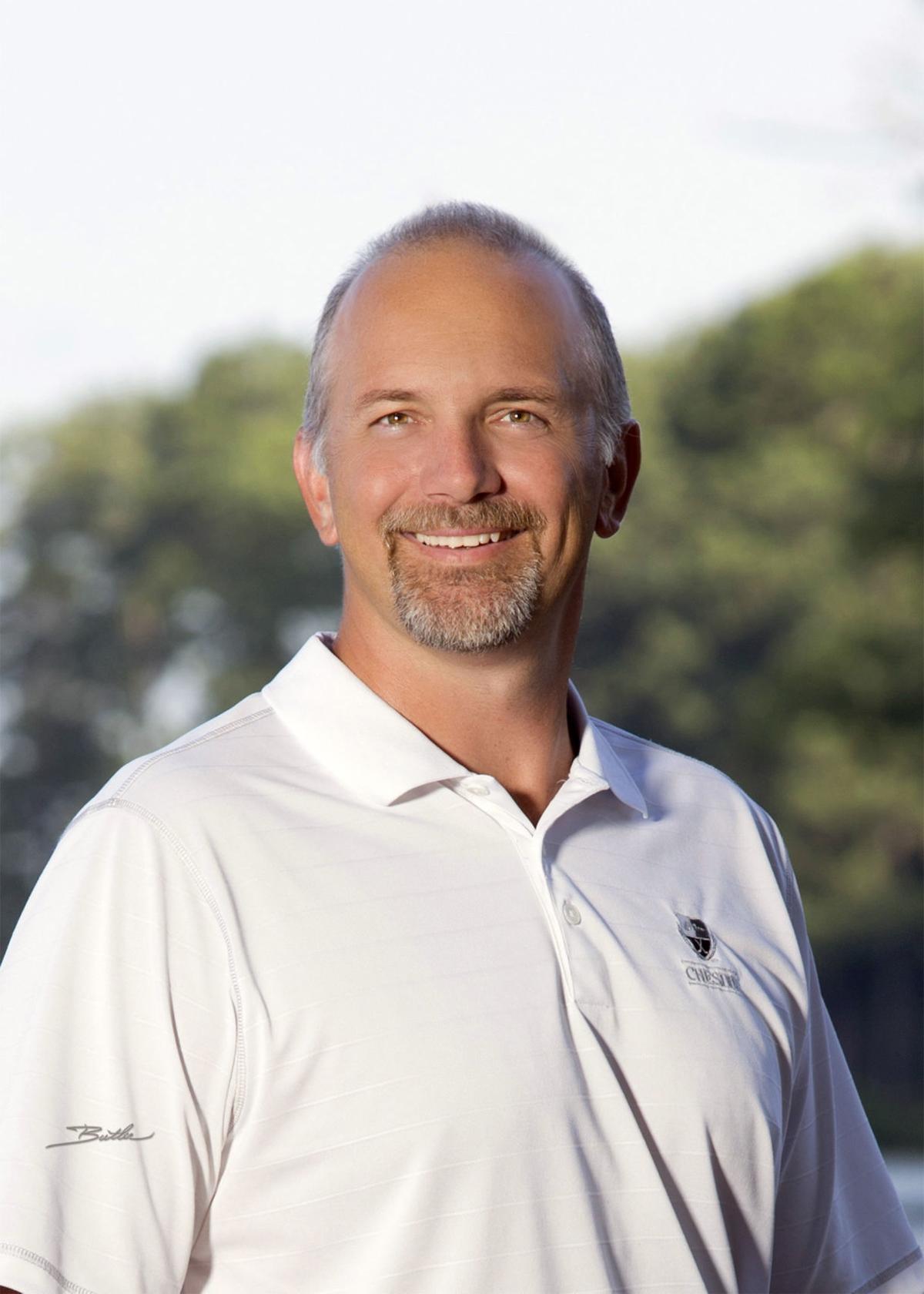 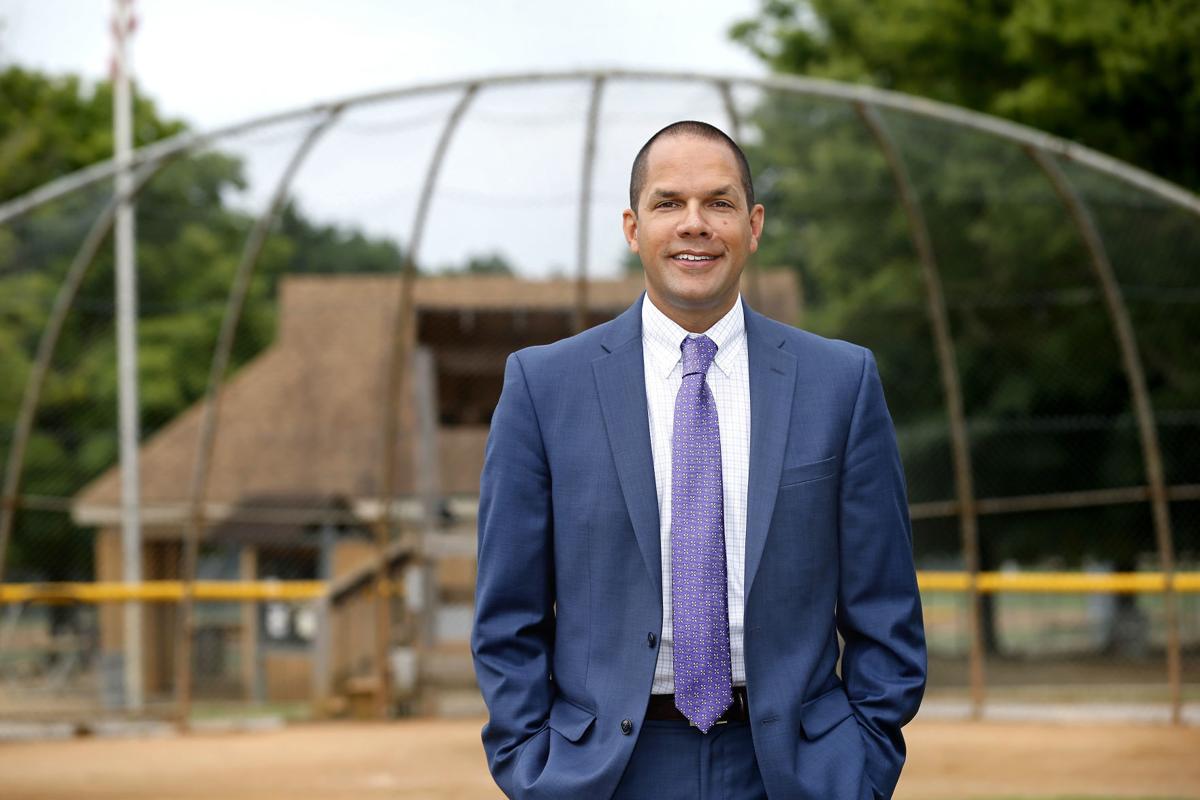 Javaid Siddiqi in March became the last of Chesterfield's five school board members to announce he would not be seeking re-election this fall.

Kevin Carroll (center) and Craig Stariha campaigned Tuesday at Chesterfield Baptist Church. Carroll won the GOP primary for the Matoaca seat on the Chesterfield County Board of Supervisors, according to unofficial tallies.

Kevin Carroll eked out a close win in the Republican primary for the Matoaca seat on the Chesterfield County Board of Supervisors, according to unofficial tallies from the state Board of Elections.

Carroll, a retired Chesterfield police officer, held a small lead over Craig Stariha with all precincts reporting around 9 p.m., according to the state tallies. The other Republican candidate for the supervisor seat, School Board Chairman Robert Thompson, was trailing in third place.

Carroll said around 9 p.m. that he was still awaiting official word that he had won.

“My two opponents put on very good campaigns. It was a very hard-fought race,” Carroll said.

Stariha, a planning commissioner, said he was not conceding the race, adding that he was still waiting for the results to be certified.

“Once they are certified, we will make a decision on our next steps,” Stariha said.

Stariha said he was not surprised about the closeness of the race. Many voters he spoke with while campaigning said they were undecided, Stariha said.

The winner of the Matoaca GOP primary will face Shajuan N. Mason, the Democratic candidate for the seat, in the November race. The incumbent in the seat, Republican Supervisor Steve Elswick, is not seeking re-election.

The Democrats held a caucus last week to pick their candidate for the Midlothian supervisor seat. Javaid Siddiqi, vice chairman of the Chesterfield School Board, prevailed over Marty Mooradian in that caucus.

“The campaign leading up to this point has been inspiring, exciting and challenging all at once,” Siddiqi wrote in a message on his campaign Facebook page after the caucus results were announced. “What I know without a doubt is that I could have never earned this nomination without your support.”

Siddiqi will face Leslie Haley, a Republican who is chairwoman of the Board of Supervisors.

Congratulations to Kevin Carroll, he will go on to win in November. Unfortunately, if you live in the Midlothian district, there won't be a real Republican running, you will hove the choice between Javaid Siddiqi, a proven liar and fraud who is simply out for whatever he can get, as he ran as a "Republican", but governed as a far Left Liberal, and did a horrible job as a member of the Chesterfield School Board. Javaid Siddiqi shows contempt for the people he was elected to represent, lies to people routinely, then lies about the lies he told, and he helped to put the School system's SRP almost $100 million in the red through his negligence and fiscal irresponsibility. No thinking person should trust ANYTHING Javaid Siddiqi says with his long, verifiable list of lies and his failures to keep his constituents informed on facts, instead of his interpretation of the facts. As far as Leslie Haley, her accomplishments are voting to raise the real estate taxes every year she has been in office, Haley also has voted for new taxes like the rain tax, and has failed to act like a Republican for all of her 4 years on the Board of Supervisors. Midlothia residents have the choice between the RINO Haley, or the lying fraud Javaid Siddiqi.......A tough call, but the contempt of Javaid Siddiqi in dealing with the people that elected him, and his consistent lying and misrepresenting the facts, make Haley the choice for Democrats in the Midlothian district of Chesterfield.

From the onset of Siddiqiâ€™s FY2020 town hall meeting he made it abundantly clear 1) he, Javaid Siddiqi, had no interest to discuss any FY2020 Budget issues in depth and went so far at the vey onset of the meeting to tell all present questions and answers should not exceed 45 minutes or less as we needed to be out of here 2) Siddiqi entire focus was to constantly fault the Chesterfield County Board of Supervisors (BOS) for their past and anticipated future under funding of Chesterfield Schools and to incite angry and incest with those present to march on the Chesterfield Courthouse and insist the BOS give CCPS what it demands 3) Siddiqi too threw seniors under the bus by saying seniors were out of touch with the changing demographics and the $$$$ needed in education because they no longer had kids in school. He clearly implied it was ok for seniors to open their wallets but their questions were baseless and they were ill informed. 4) It was abundantly clear Siddiqi did not want and was not going to discuss / answer probing questions about the Superintendentâ€™s proposed FY2020 Budget. 5) Siddiqiâ€™s avoidance, evasive generic answers and his continued insistence to shut down and cease discussions / actions on any such questions / issued raised were orchestrated to foster his own agenda to lay blame the BOS for underfunding schools and incite anger with those in attendance. 6) At no time did Siddiqi foster any meaningful discussions with those present about what was good / working and what was needed in the Midlothian district including but not limited critical maintenance, transportation, and dirty filthy schools etc. 7) Siddiqiâ€™s whole mission was to push his agenda for poverty while making a name for himself and polishing his halo 8) Siddiqi became visibly irate losing composure and decorum resorting to his unacceptable behavior of having a citizen removed from the town hall meeting to stifle this citizenâ€™s legitimate request for information. 9) to say that Siddiqi has clashed on multiple occasions with Martin, myself / Ron Hayes and other Chesterfield residents over the school systemâ€™s spending priorities, accusations of waste and inefficiency, and a lack of transparency in its operations is a total understatement. Siddiqi has a 100% track record of deflecting criticism and refuses to accept responsibility for anything which can, does or will reflect negatively on him. 10) BOS Siddiqi had and his actions clearly prove he had no intention to have a productive, open town hall meeting with free and open exchange of questions / issues. 12) What I and others witnessed was the true Siddiqi at his best fostering his persona, his image, and his dictatorial ways to control.

Trust me you will rue the day if Siddiqi is elected to the BOS. Siddiqi cares for no one or anything other than himself. It is all about Siddiqi, his image, his networking, fostering his own selfish personal agency and that of the Hunt Institute, polishing his halo. He has and continues to be an absolute disaster on the CCPS School Board. He is not qualified to set on the BOS as he has no municipal government expertise / experience other than education. Why is he not seeking another term on the CCPS School Board. The answer is crystal clear. The residents and taxpayers of Midlothian District are completely fed up with him including myself who resides in Midlothian. We are tried of his half truths, manipulations, dismissive and degrading demeanor, his obsession to control and dictate. He is a snake in the grass and cannot under any circumstances be trusted. Siddiqi is a â€œswitcher hitter, a user and a total fakeâ€. He aligned himself with Chesterfield Republicans to get elected the School Board in November 2015 as well as with Republican Governor Bob McDonnell administration to become Deputy Secretary of Education and later Secretary (for only 2 months) when Laura Fornash left. So now Siddiqi has coined himself a â€œdemocratâ€ and is running for Midlothian Board of Supervisor. Siddiqiâ€™s style is to manipulate, discredit, deflect and blame others. Siddiqi has not attempted to earn respect from the taxpayers and residents of Midlothian. AVAID SIDDIQI = ARROGANCE PERSONNIFIED JAVAID SIDDIQI BOARD OF SUPERVISORS = NO WAY

Siddiqi had no business being elected in the first place as he promised way too much. He should not be reelected no matter which party he says he belongs to this time. He promises much but accomplishes nothing.

Way to go Kevin Carroll. Hands down you were not only the best but the right candidate. Congratulations

The person who says read my lips.... â€œNo Meals Taxâ€ will win. Because the idiots in Richmond pay 12.8% tax on every coffee they buy ..... the highest in the Nation because the City Taxes a milkshake...... a cup of coffee and even a beer by itself at 12.8% tax and the stupid people of Richmind letâ€™s them get away with it