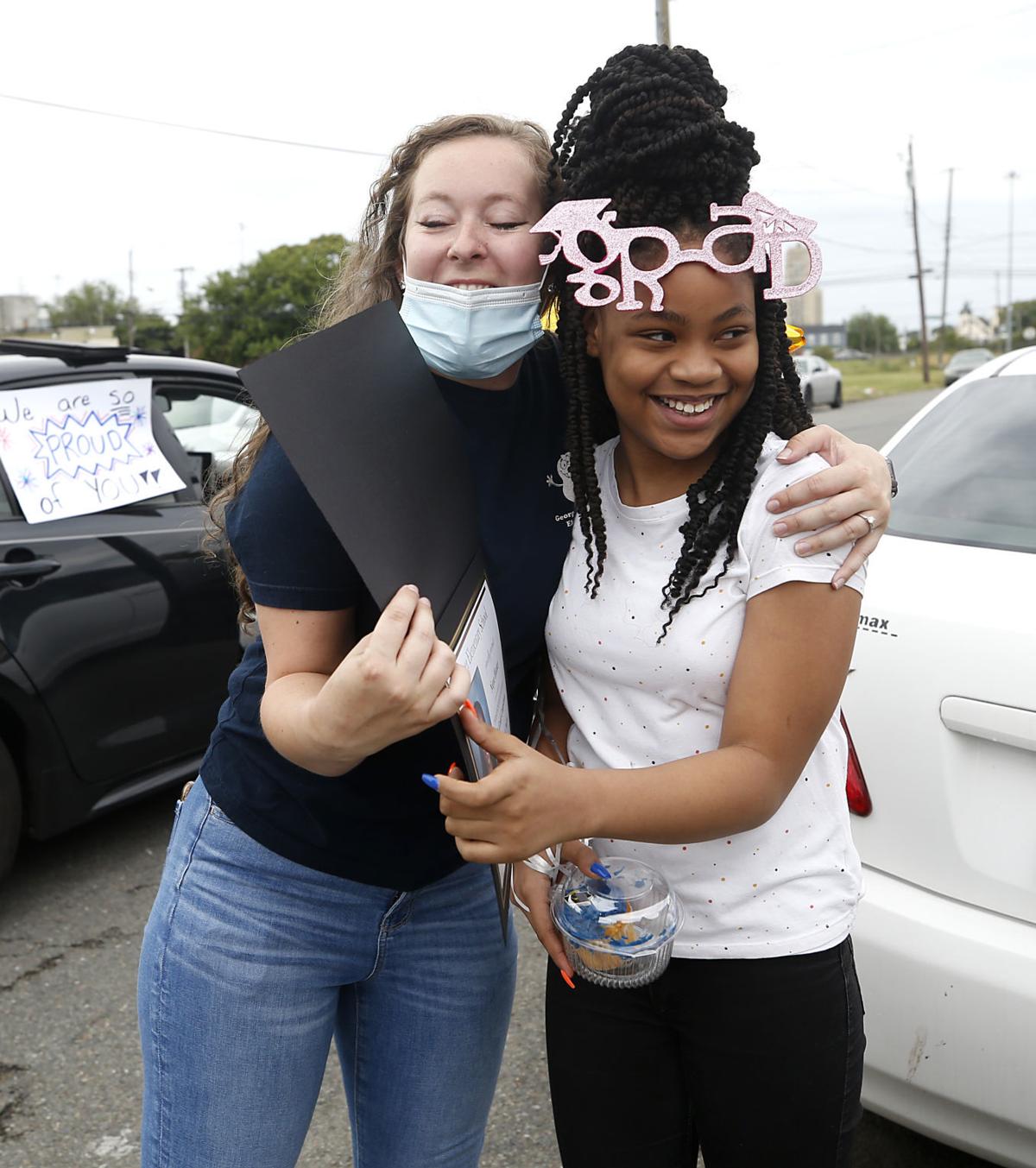 Fifth-grade teacher Jenny Bayer handed Nique Hunter her graduation certificate during Carver Elementary’s graduation parade on Monday. There were 66 fifth-graders in the school’s Class of 2020. 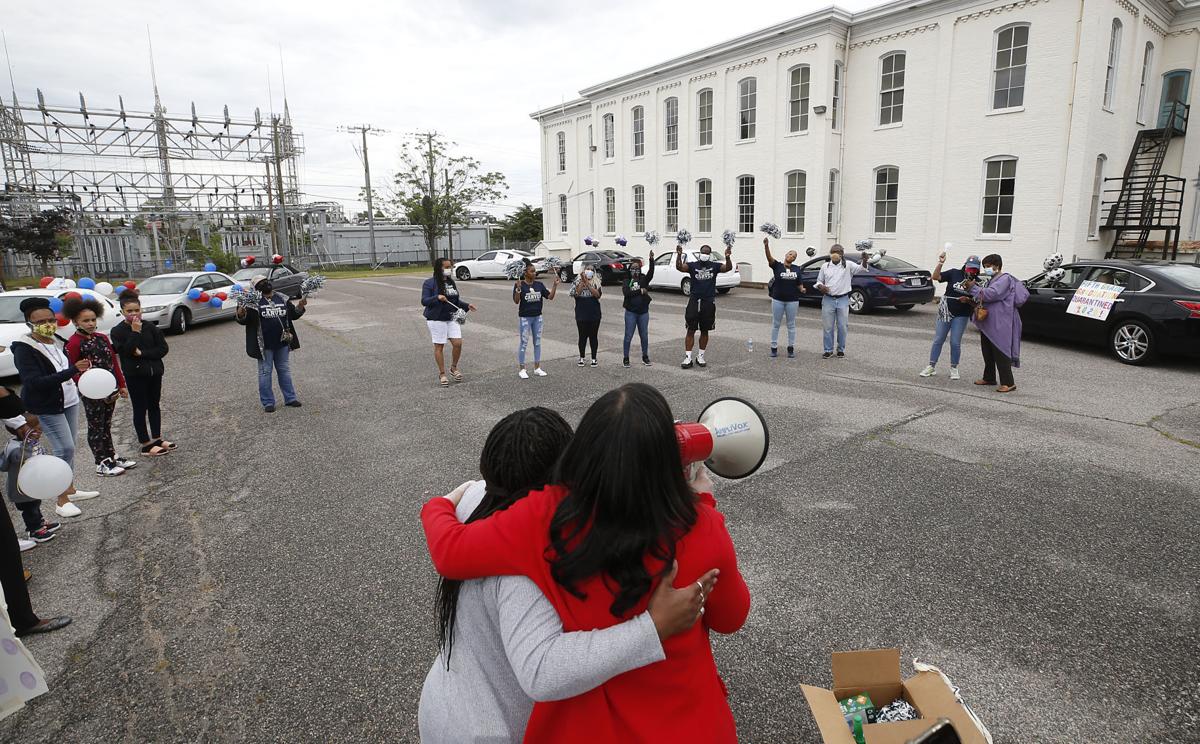 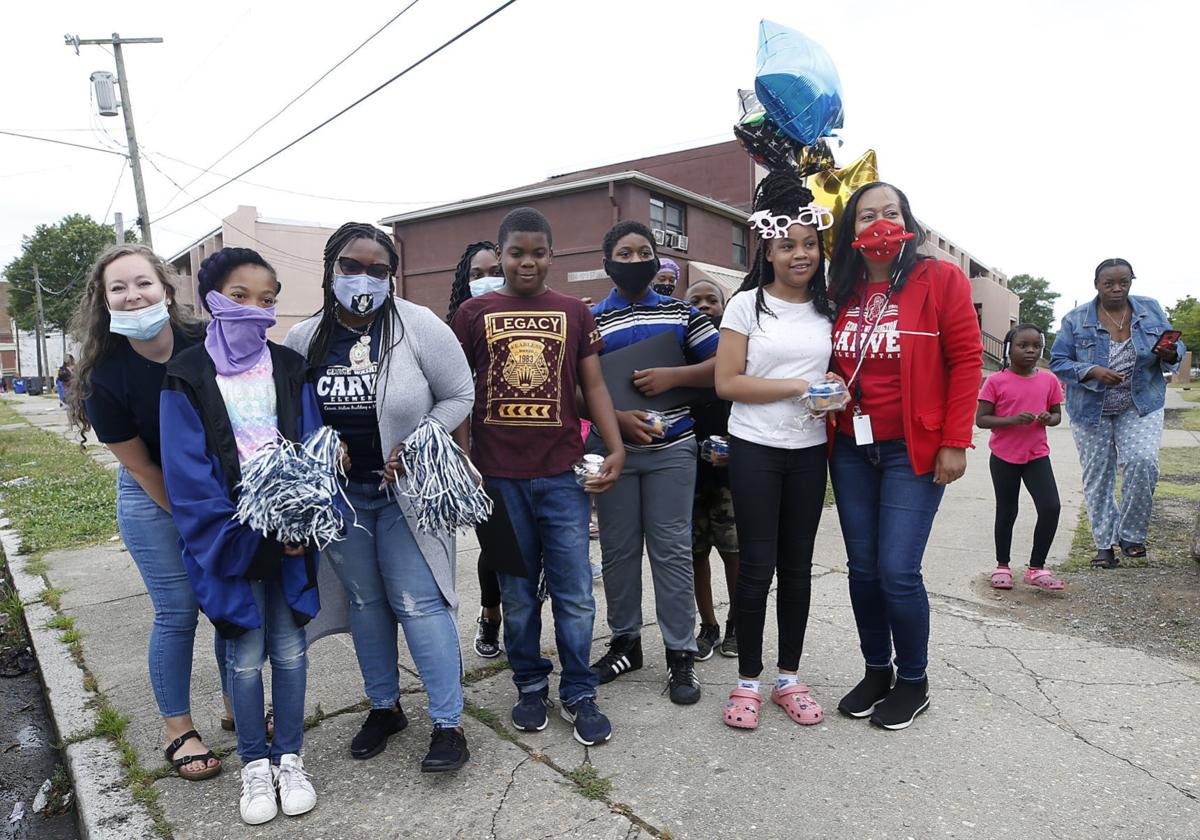 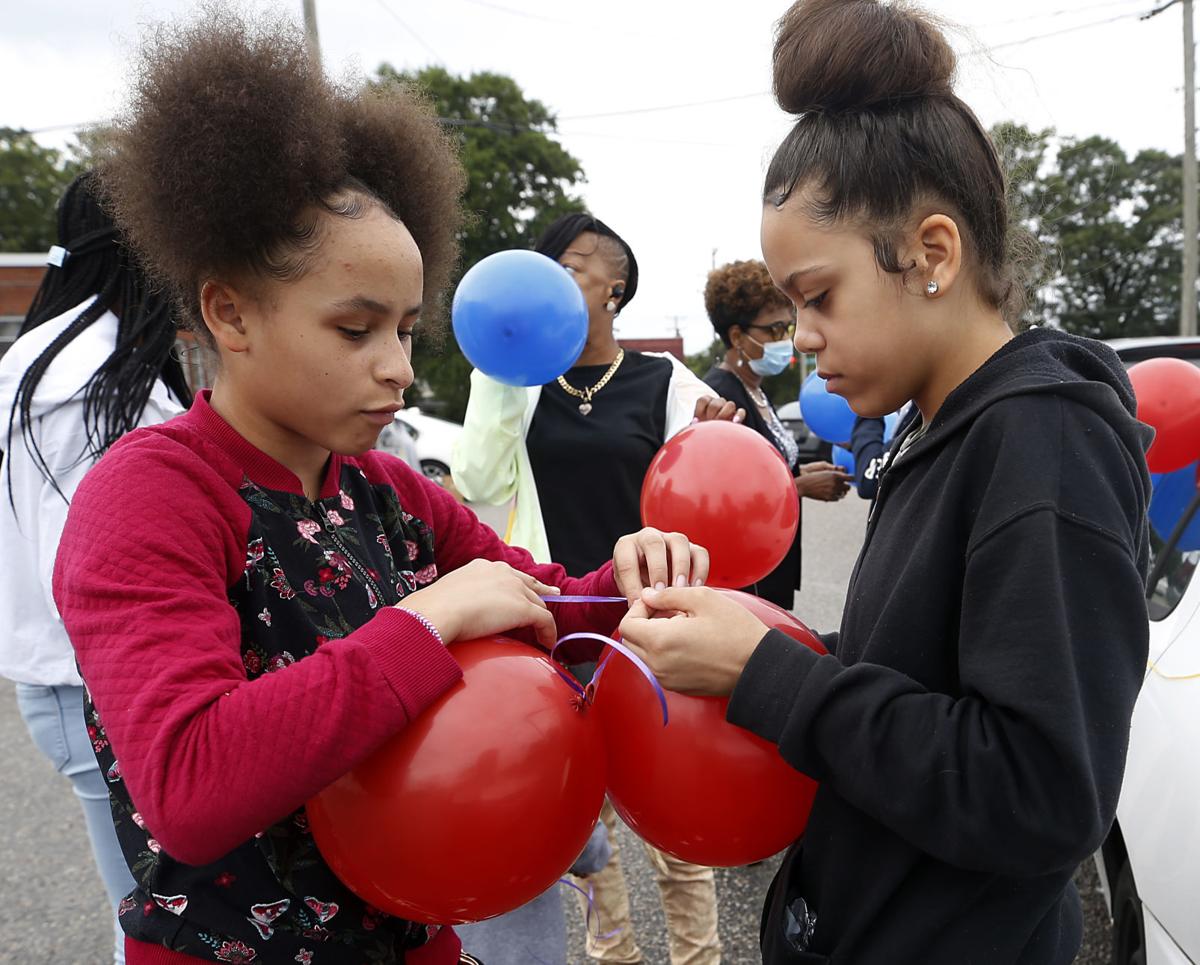 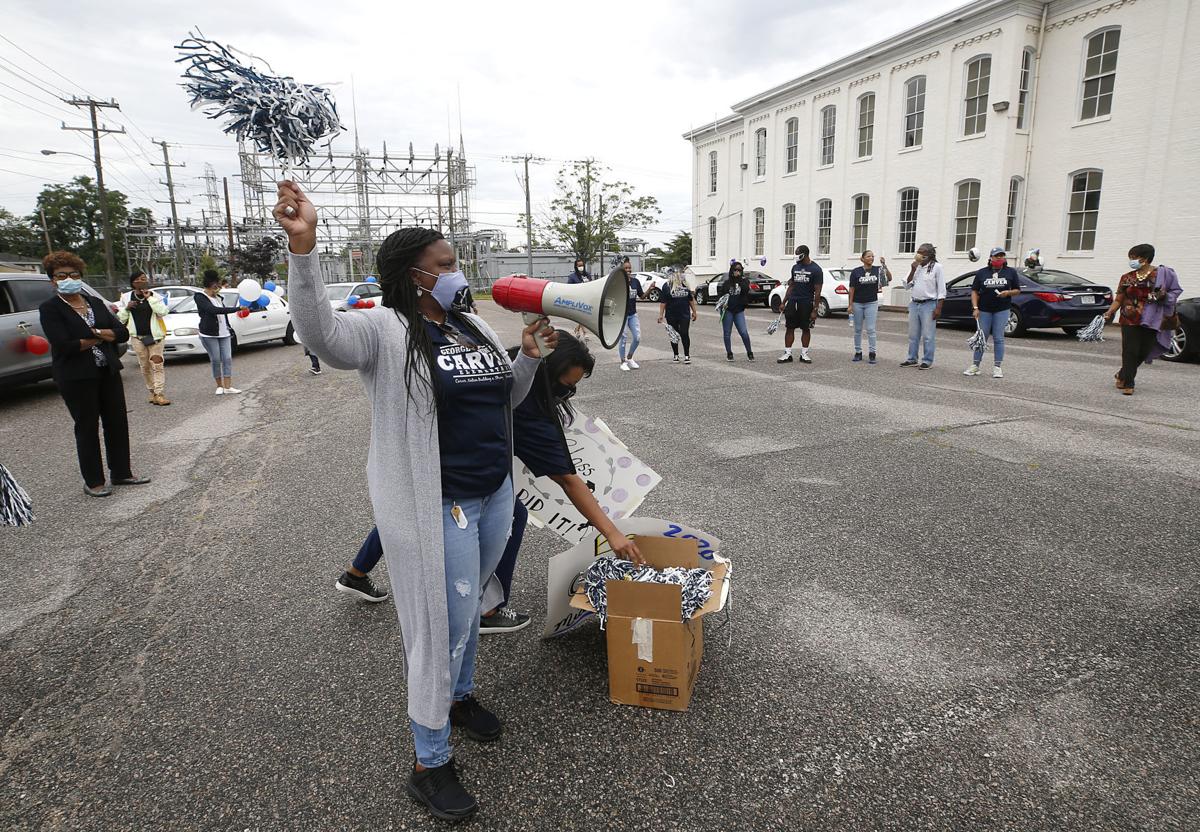 Teacher Frenishee Smith asks if everyone has a pom pom before Carver Elementary School staff, teachers and volunteers honored their 5th graders with a graduation parade Monday, June 15, 2020. 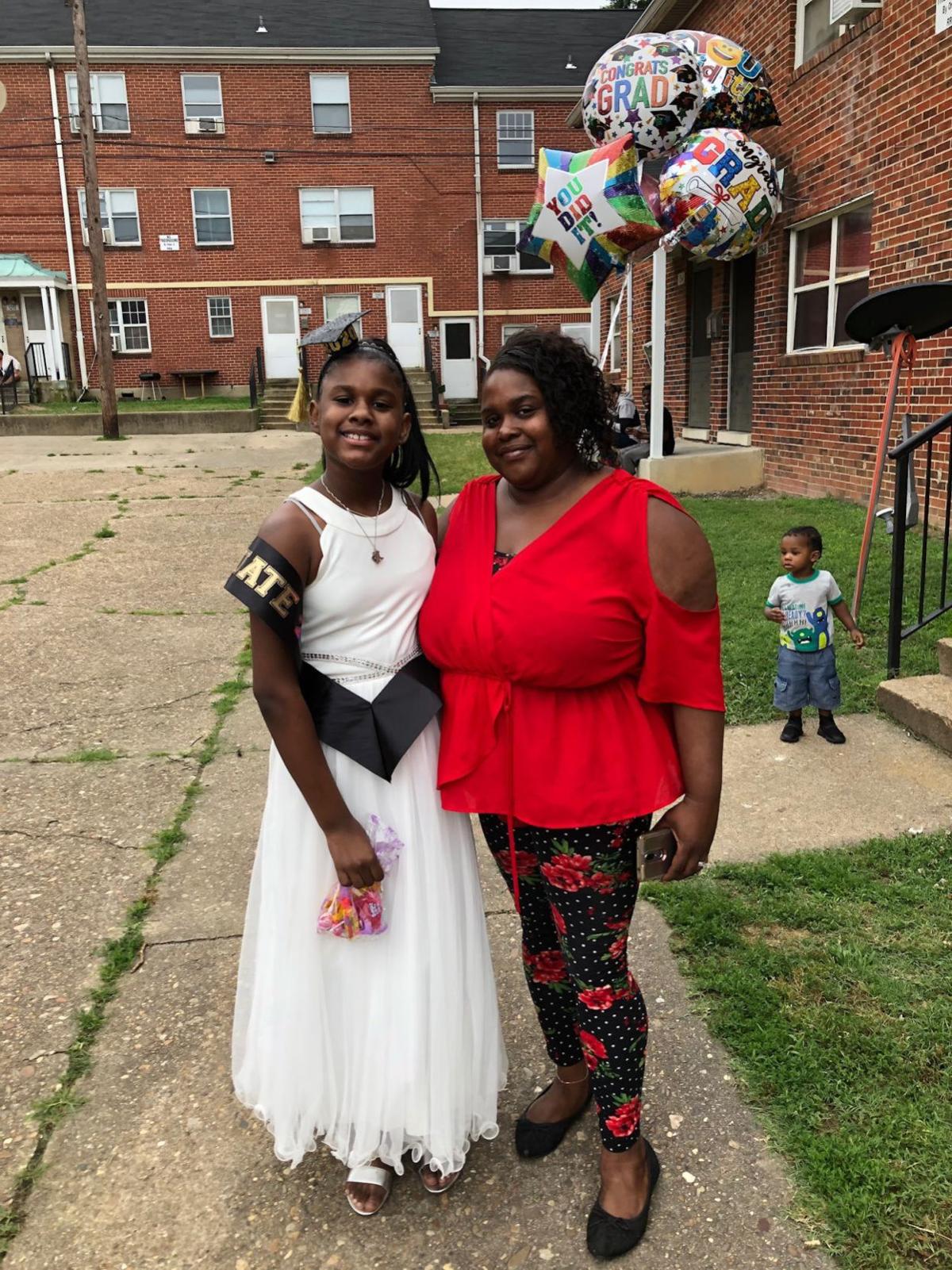 Fifth-grade teacher Jenny Bayer handed Nique Hunter her graduation certificate during Carver Elementary’s graduation parade on Monday. There were 66 fifth-graders in the school’s Class of 2020.

Teacher Frenishee Smith asks if everyone has a pom pom before Carver Elementary School staff, teachers and volunteers honored their 5th graders with a graduation parade Monday, June 15, 2020.

The sun struggled to break through clouds on the 18th day of unrest in Richmond, three months after the COVID-19 pandemic shuttered schools, but Erin Clark couldn’t stop smiling.

Erin, 11, should have been walking across the auditorium stage with 65 others at George Washington Carver Elementary School, where administrators had planned to pass out cupcakes piled high with icing and snap photos of families beaming before signs celebrating the Class of 2020.

Instead, she stood tall along Calhoun Street in the white ankle-length dress her mother had bought for the occasion, clutching a bundle of balloons in one hand and waving with the other to dozens of Carver teachers, administrators and school volunteers shouting their love and support during a parade past the students’ homes Monday.

“It feels mad good,” Erin said of reaching the first finish line of her academic career. “I did it!”

School leaders couldn’t cure COVID-19 or end the police brutality that led protesters across the country to the streets, but they were able to bring the cupcakes, said school Principal Tiawana Giles, who reflected on the short mile between the school and a towering monument to Confederate Gen. Robert E. Lee that has served as the epicenter for Black Lives Matter protests in Richmond.

The proximity matters, especially for students of color born in the aftermath of the Great Recession, who entered school as police killings of black people sparked a movement that has gained broader support in recent weeks following the death of George Floyd in Minneapolis.

“My kids experience [racism] every day,” Giles said. “They are used to being looked at differently ... being seen as the kids from Gilpin Court. But they have the mentality of ‘That’s not who I am.’”

Now more than ever, the educators and volunteers of Carver, named for a pioneering African American scientist, wish they could wrap arms around the students, more than 90% of whom are black.

They couldn’t give the kids a packed auditorium, blue robes and hats with white tassels, speeches from local officials or the school’s signature cookout, but they brought as much joy and noise as they could muster.

“Today is about them, and about letting them know they are loved,” volunteer Clarissa Beasley said as she took a break from inflating the red, white and blue balloons she had originally bought for a Fourth of July celebration.

She decided to use them on cars driven by STEP reading program volunteers and members of Victory Life Fellowship Church instead.

“Nothing is ever guaranteed in this life; let us celebrate them now,” said Della Wilson, a STEP volunteer who used to work as a preschool aide at the school, as the group prepared to leave the school parking lot.

Dozens of drivers honked and cheered their way in a loop around Carver before streaming into Gilpin Court, blowing bubbles and shaking pompoms at families who had streamed out onto the sidewalks to film the cars and greet people they have been missing since schools closed in March.

Giles hopped in and out of a sedan to love on students and families while trying to maintain some semblance of social distance. Teachers have been calling at least five families a day to keep up with them during the closure, she said, but it’s a struggle. And everyone needs a hug.

Mattie Murray, who volunteers with the students, said it was a relief just to lay eyes on children who have been weighing heavier on her heart with each passing day.

“This is a trying time for our children and not just the ones in Gilpin,” she said as the car passed Greater Mount Moriah Baptist Church. “They need care and compassion and for their questions to be answered honestly.”

Murray said she related to students’ lived experiences, as a black woman who integrated a South Carolina school in the eighth grade.

She shouted at a trio of girls in bright T-shirts, eating freeze pops and waving.

“My hope is that this will truly be a time for honest conversations, for exploring the hurtful things we feel and what we have carried,” she said. “The truth is that some of us are more privileged than others.”

Giles said the support in January of Monument Avenue preservationists who helped raise more than $100,000 for a foundation formed in the aftermath of a cheating scandal that rocked the school two years ago is a sign of progress.

The money has gone in part to fund technology improvements at the school, such as buying computers and smart boards.

Challenges remain. About 1 in 3 students who were in the fourth grade last year read on grade level, according to state data. Scores are not available for the current year; students were unable to take accountability tests during the pandemic.

“What they did for us was just beautiful,” said Wright, hands clasped, as she beamed at Erin. “These kids have taken the hardest hit in all this. Their whole lives just stopped, and they’re just getting started.”

Giles grinned in the back seat as the sedan pulled back into the Carver parking lot.

A mile away, the Lee statue sat coated in the language of the unheard. Woven amid the graffitied profanities and proclamations: “Trayvon looked just like me.”

But also: “The world is watching.”