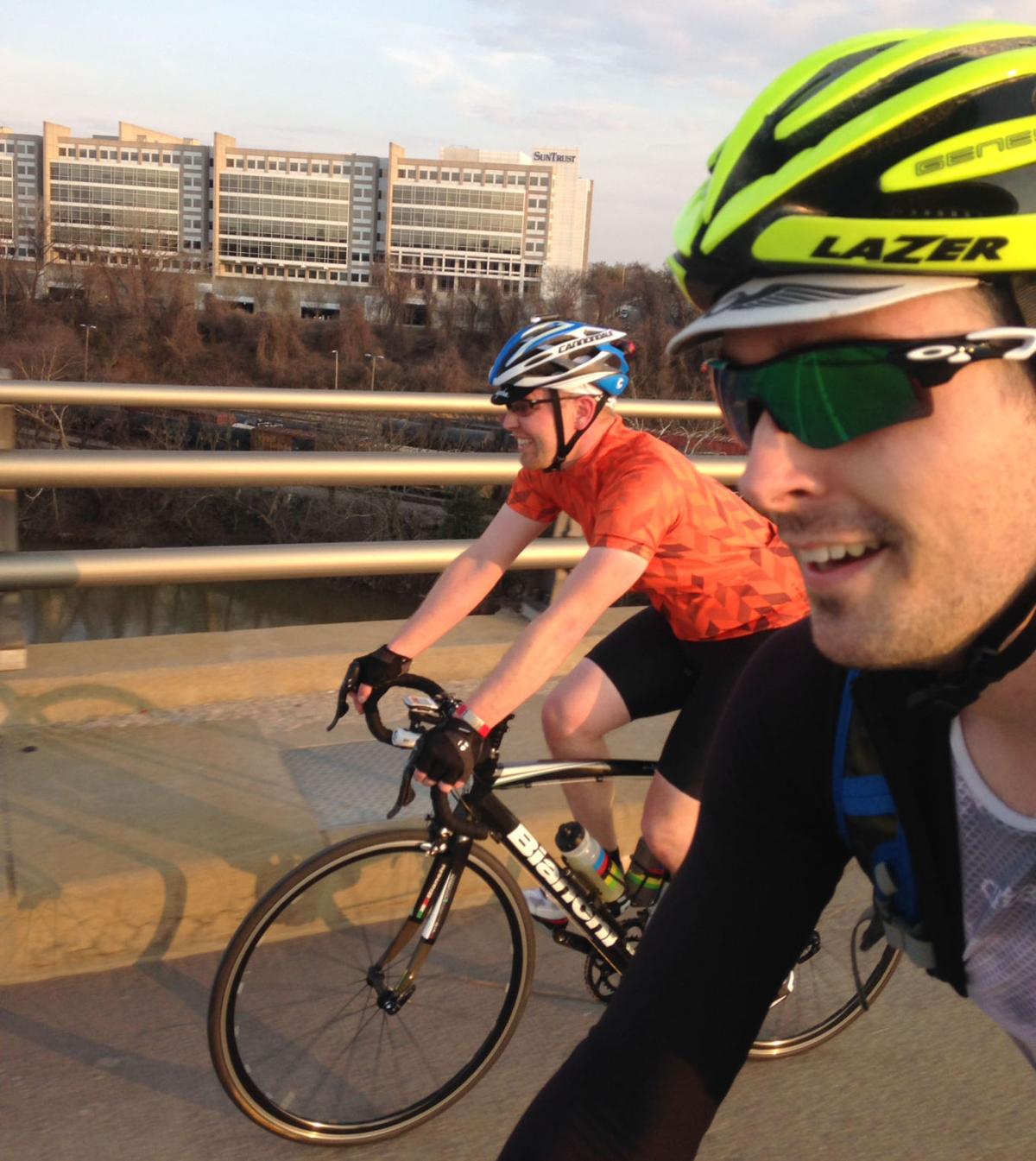 Christopher Long (front) and Ross Kimball’s bike commute to the Chesterfield County complex in Chester is about 30 miles round-trip. 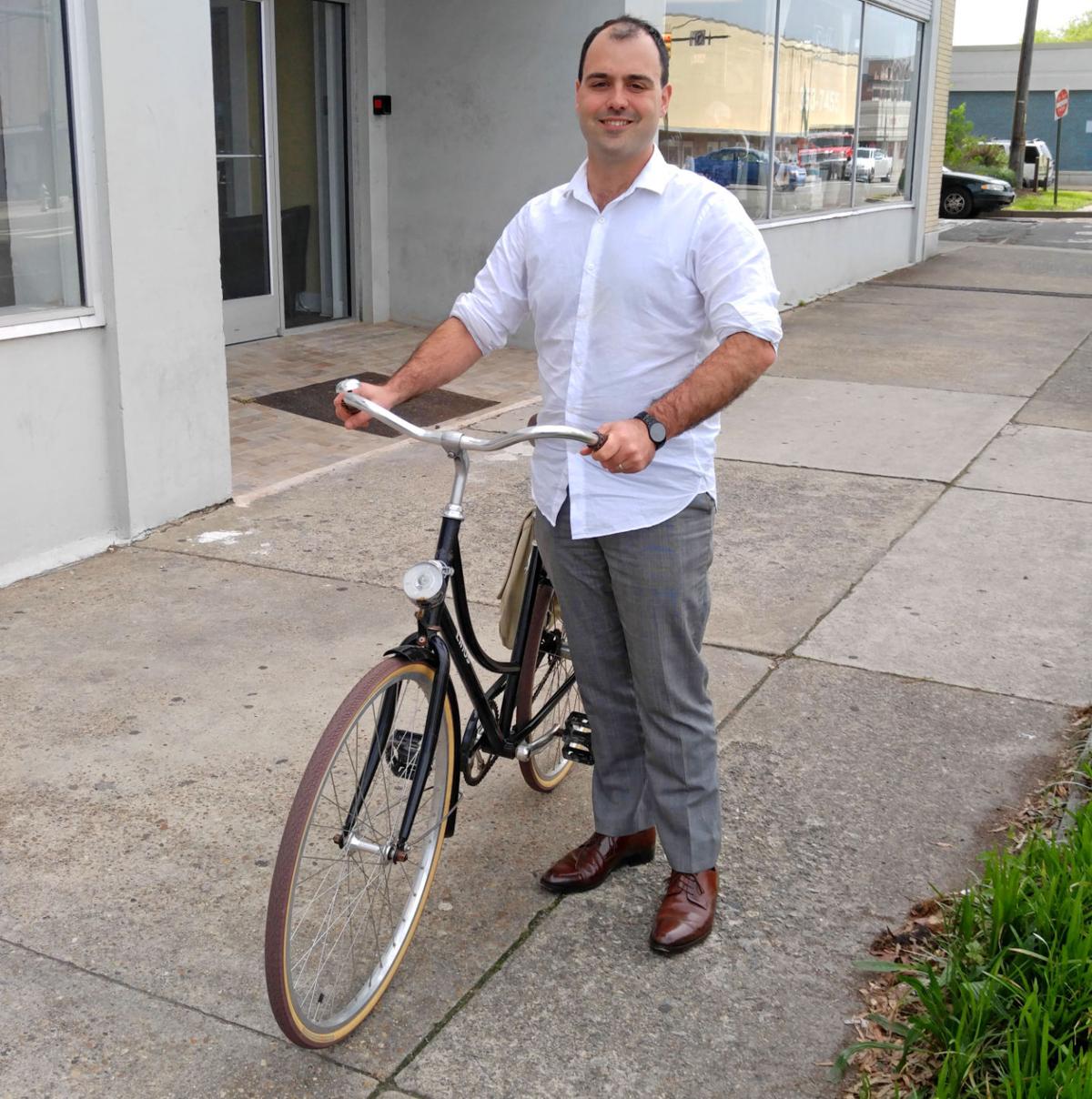 David Streever bikes about 5 miles a day around Richmond, including to work, errands, restaurants and social events. 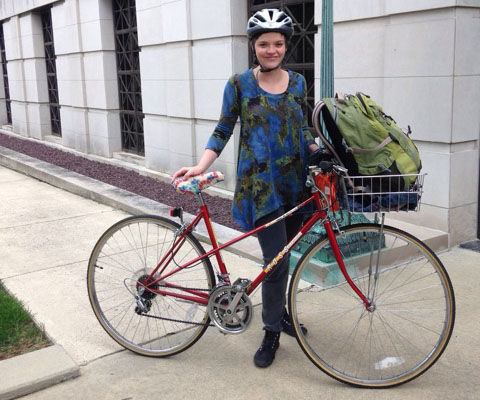 Jolene Smith poses with her bike and gear. She commutes most days by bike between the Museum District and South Richmond.

Christopher Long (front) and Ross Kimball’s bike commute to the Chesterfield County complex in Chester is about 30 miles round-trip.

David Streever bikes about 5 miles a day around Richmond, including to work, errands, restaurants and social events.

Jolene Smith poses with her bike and gear. She commutes most days by bike between the Museum District and South Richmond.

This week, we’re going to explore the benefits of bike commuting in Richmond.

Since the start of this year, I’ve become a full-time bike commuter. I live 9 miles from my downtown office. I’ve biked through snow, rain and wind, and loved every minute of it. I’ve biked more than 1,200 miles in 2016, with 95 percent of them replacing car trips. I’ve dropped my parking deck fee, family gym membership, and lowered my vehicle’s fuel consumption for a savings of more than $170 a month. I’ve even lost 10 pounds.

Richmond-area localities are developing a network of bike infrastructure and already offer many safe streets to ride. But the most dangerous locations for cyclists occur in between the safe spaces. Streets with high speeds, no shoulders, hundreds of parked cars, blind spots, huge intersections and more can be intimidating for many riders.

Remember, bikes are legally allowed on roads, except interstates and some highways. Bikes also are allowed on sidewalks, but to truly be considered a bike-friendly city, cyclists need to feel safe leaving the sidewalks to pedestrians. The region has more work to do.

May is National Bike Month, sponsored by the League of American Bicyclists. It’s a chance to showcase the benefits of cycling and encourage more people to give biking a try. Locally, Bike Walk RVA has assembled a list of Bike Month events, including Bike to Work Day in Richmond on May 20. For many cyclists, every day is bike to work day. Let’s meet a few locals who prefer to self-propel themselves on two wheels.

Christopher Long lives in the Fan District. He and friend Ross Kimball work at the Chesterfield County complex in Chester. For the past year, they’ve biked the 15-mile trip four or five days a week, Long said. That includes frigid and sweltering days.

“We’ve whittled it down to 54 minutes, definitely settled into a rhythm. It takes about 30 minutes by car,” he said. Much of their commute involves riding the shoulders of state Route 10.

“When I started working at the county, I was about 30 pounds heavier,” said Long, who’s about 165 pounds now.

“It is a nice way to get in a ride without missing family time,” he said. Combining his commute with exercise frees more time with his wife and 2-year-old son.

“I did 100 miles at the Martin’s Tour of Richmond, and I was able to manage it pretty well without training,” he said.

Biking to work may have provided a more efficient fitness regimen, but it has not translated to a financial windfall. Long takes the blame for that.

“It’s nice to not have to own a second car, but there’s not much savings,” he said. “I probably spend a good chunk of that money on new bike gear.”

Jolene Smith commutes by bike most days — except when it rains — between the Museum District and her South Richmond home.

She started biking out of convenience, not for fitness. “I don’t identify as a cyclist, and I’m not a gear person. I ride an old 1980s bike and wear regular clothes.”

Biking is her quiet time. “It is good to get the blood pumping, but it is very helpful mentally. It is my time of the day to have no talking, relax and get settled.”

Smith takes that time seriously. As a parent, biking helps her to leave work behind and find a happy place before arriving home. Plus, she loves being outside and connecting with the world — in some ways more than others.

“If I take a few days off riding, I’ll realize that I missed the smells,” she said. Riding past all the fine eateries in Carytown can be tempting, too. From spring flowers to food and even the James River, biking helps enliven her olfactory experiences.

Not all of Smith’s commute is carefree. Passing through Byrd Park on Blanton Avenue can be dangerous, and she often finds it to be difficult to cross Forest Hill Avenue at Jahnke Road.

“That’s one of those spots that I’ve gotten confident and hyperaware of my surroundings,” she said. Her 5-mile commute includes crossing the James River. She takes the Boulevard Bridge, which has long, steep hills to climb in either direction.

“I’m comfortable now, but it took a while to get used it,” she said. If she has to drop off her daughter at school, she often has her husband also drop her off at work so she can ride her bike home.

“There was a period where we thought about getting another car but held off because it was too expensive,” she said. “We definitely saved money on insurance, and I don’t have to go to the gym.”

David Streever lives in the Fan District. He is a writer, currently working on bike travel guides for Connecticut and Long Island, N.Y. He and his wife moved to Richmond a couple of months before the UCI Road World Championships in September.

“It was perfect, just in time for the bike races,” he said. It made an immediate impression on him that Richmond welcomed people who like to bike.

His bike commute is less than a mile, but he figures that he bikes at least 5 miles a day, including going to business meetings and restaurants and running errands.

The convenience of biking is a big lure for him.

“Parking is tough in Richmond. I love that I can bike up to a restaurant, lock up and not worry about finding a parking spot,” he said.

He often bikes with his wife, who also rides about a mile to work.

“I think you get a different feel for the city on a bike,” he said. They have been trying to learn more about Richmond and meet people, and riding a bike has made it much easier to socialize.

“Biking is the right speed to let you stop and say hello. I’ve met plenty of people biking around,” he said.

Streever was quick to add that he had to learn the right places to bike to avoid automobile traffic. “Richmond is definitely not the ideal situation for safe biking yet.”

Want to bike commute? When getting started, I’d recommend choosing a familiar, safe route. Bike neighborhood streets with low speed limits instead of fast-moving, high-volume streets. Make sure you have bike lights if you’ll be riding early or late in the day, get a good bike lock and consider carrying a tire repair kit.

Bike Walk RVA offers a bikeways guide with maps and information on safe biking in Richmond. See more at www.sportsbackers.org.

Read questions raised by Times-Dispatch readers on a variety of topics about the Richmond region.