It's unanimous: All nine Richmond City Council members back removal of Confederate monuments on Monument Avenue 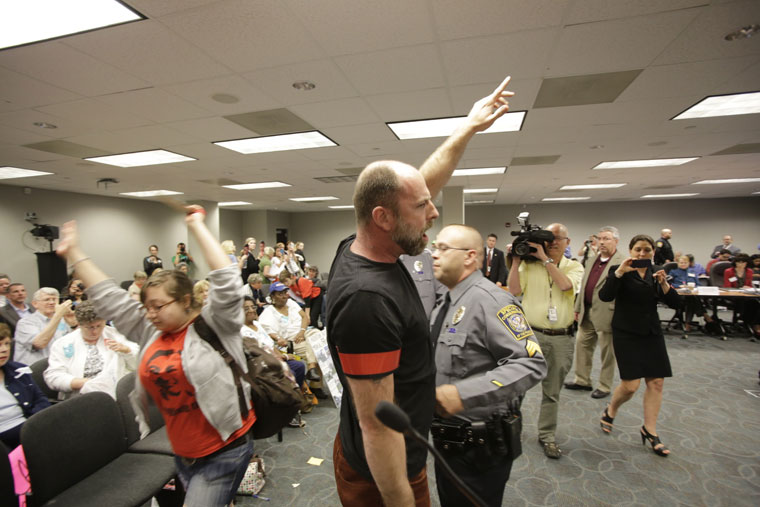 Members of Virginia Board of Health prepare to take final vote on abortion clinic regulations. 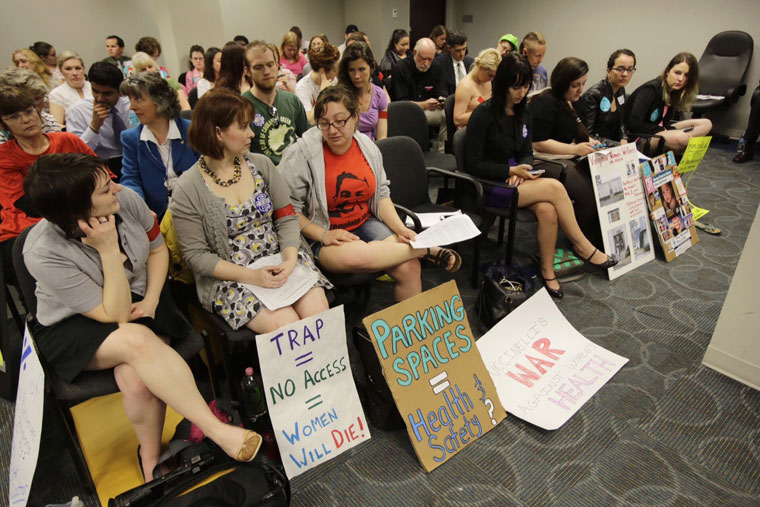 A crowd awaited the vote of the Virginia Board of Health this morning.

Pro-choice supporters demonstrate after the Virginia Board of Health passed abortion clinic regulations.

Members of Virginia Board of Health prepare to take final vote on abortion clinic regulations.

A crowd awaited the vote of the Virginia Board of Health this morning.

The Virgina Board of Health today gave final approval to regulations that will require Virginia's existing abortion clinics to adhere to the building rules for hospitals.

The 11-2 vote  followed an hour of public testimony and defeat of a proposal to grandfather in existing clinics. Following the vote anti-abortion advocates clapped and abortion rights advocates shouted "shame!" and "Ken Cuccinelli has blood on his hands" as they were escorted from the hearing room.

About 30 people spoke during the comment period, most in opposition to the regulations. The hearing room was filled to capacity with more than 100 spectators. An overflow room was also set up.

The two board members who voted against the regulations, James Edmonson of McLean and H. Anna Jeng of Norfolk, sought to postpone the decision until June, urging more time to investigate less costly alternatives for the state's abortin clinics.

Supporters of the regulations say they protect women's safety. Opponents say the rules are medically unnecessary and are meant to restrict access to abortion.

“These reasonable regulations will begin to reign in reckless abortionists in Virginia,” said Olivia Gans Turner, president of the Virginia Society for Human Life. “Tragically, important as they are, these regulations cannot guarantee the long-term well-being of women that obtain an abortion, nor do they protect the unborn children who lives are taken during every abortion.”

Cianti Stewart-Reid, executive director of Planned Parenthood Virginia PAC, said: “The sole purpose of these types of restrictions is to make abortion inaccessible to women by imposing unnecessary and sometimes impossible-to-meet restrictions on health centers.”

Katherine Greenier, director of the Patricia M. Arnold Women's Rights Project at the ACLU of Virginia, said: “These burdensome construction requirements have no relation to the safety of the services that women's health centers provide,” said “Clearly, the aim here is not to protect women's health but to shut down clinics that provide essential health services, including abortion.”

Today marked the final vote in the board's regulatory review, which has taken nearly two years.

The regulations now head to Gov. Bob McDonnell for final review before being published in the Virginia Register of Regulations for a 30-day final adoption period, at the end of which the regulations will become effective.

Virginia's 20 licensed clinics have less than two years to comply with the regulations.

(This has been a breaking news update.)