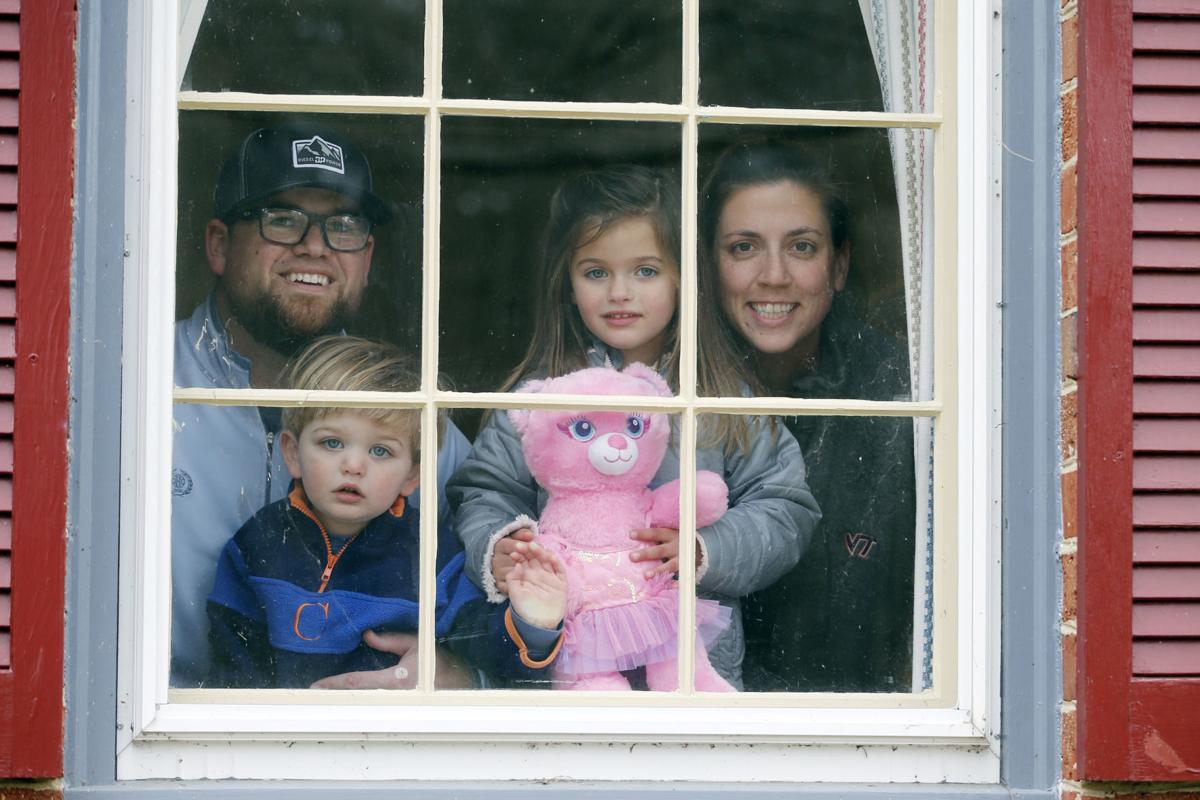 Emerson Mitchell, 4, holds a teddy bear displayed in a front window of her home in the Whitaker Woods community in Short Pump while flanked by her father, Anthony Mitchell, mother, Bailey Mitchell, and brother, Charles Mitchell, 1. 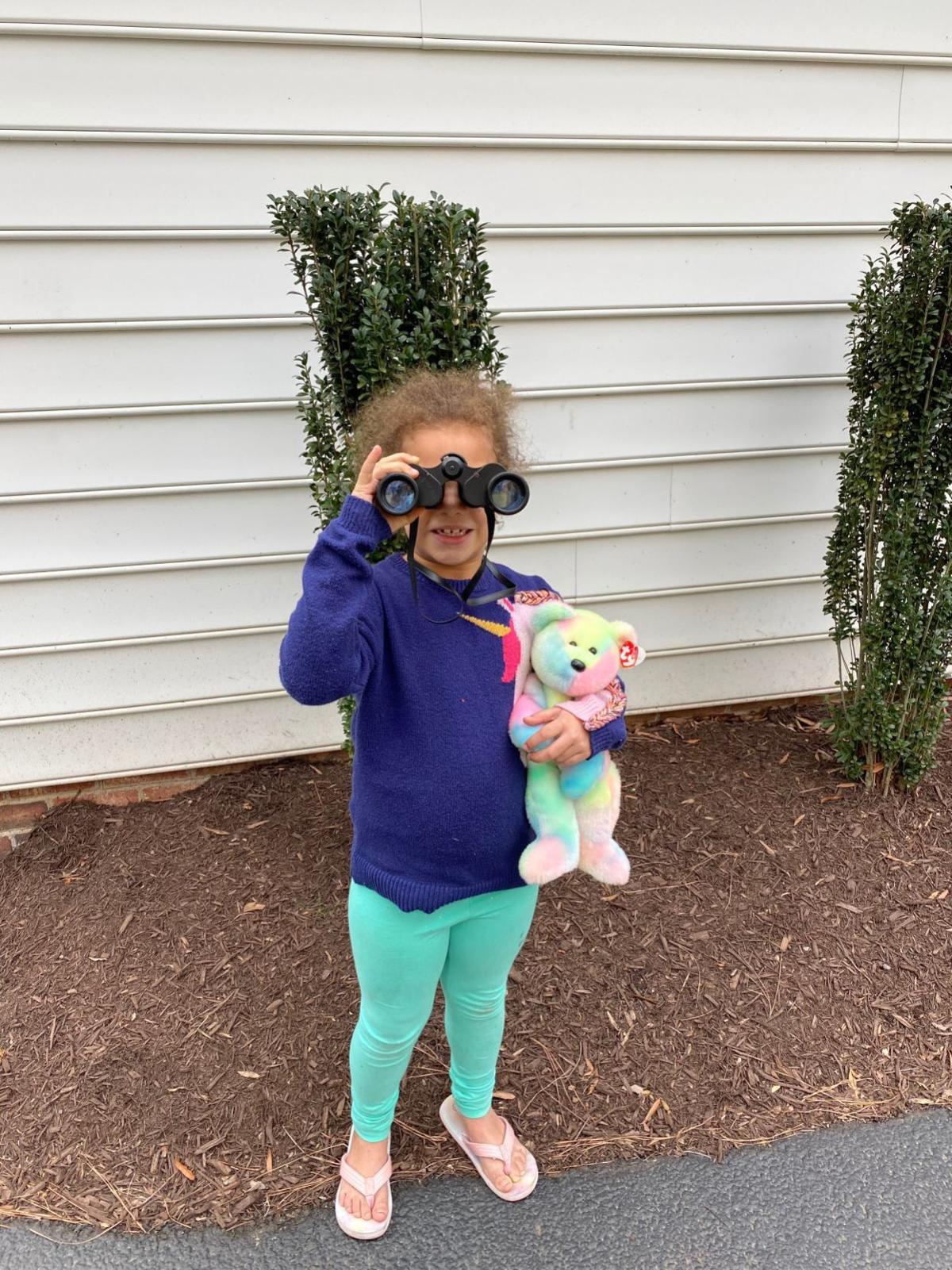 Emerson Mitchell, 4, holds a teddy bear displayed in a front window of her home in the Whitaker Woods community in Short Pump while flanked by her father, Anthony Mitchell, mother, Bailey Mitchell, and brother, Charles Mitchell, 1.

On Monday, Pyper Pryor, 6, stepped out in her bear-hunting outfit: Pale pink flip-flops, teal leggings with a unicorn sweater to match and, of course, her binoculars.

Her sidekick, a tie-dyed teddy bear named Teddy, was in tow, ready to seek out the bears in Short Pump’s Whitaker Woods, where residents had propped furry bears on windowsills inside their homes. Some positioned the bears on suitcases or upside-down laundry baskets — anything to keep them upright.

Teddy bear hunts have popped up in Texas, Tennessee, Northern Virginia and across the Atlantic Ocean in London to offer levity in the middle of the coronavirus pandemic.

In the Richmond area, they’ve been spotted in Short Pump, Tuckahoe and North Side, among other places. Inspired by the nearly 30-year-old children’s story “We’re Going on a Bear Hunt” by Michael Rosen and Helen Oxenbury, residents prop up stuffed bears in their windows, and kids try to spot them all.

Pyper proudly proclaimed that she spotted 38 on Tuesday, up from her first round Monday when she found 29. Her goal is 100.

She planned to celebrate by asking her mom if they could have cake.

A few windowsills had more than just stuffed bears.

One home showcased a Captain America stuffed animal. Another had a Winnie the Pooh and a few had unicorns, Pyper’s favorite. Delaney Mescall, who also lives in Whitaker Woods, had a monkey named Charlie in one window, not to be confused with Oreo, the chunky brown bear guarding one of her house’s first-floor windows.

Over in Grey Oaks, a residential community in Short Pump where Carrie McAllister posted in her neighborhood’s Facebook group about the bear-in-the-window idea, there was a 3-foot inflatable bear dangling in a tree. More than 20 houses, and counting, have participated.

“I wanted just to get the word out,” McAllister said. “There’s a lot of little things that people can do that can brighten kids’ days, and this is an unprecedented thing we’re going through.”

Both Mescall and McAllister were unsure where it all began, but remembered seeing Chris Tickle, a fourth-grade teacher at the Steward School, post about it on social media. He credited his Facebook group of more than 130,000 teachers who help one another navigate remote teaching.

In his morning virtual meetings with his class, he had the Velveteen Rabbit hanging out in the dining room.

“It’s neat to see how in this time where we’re having to social distance, technology is allowing us to have connections,” Tickle said. “I thought, ‘What fun would it be for young children to be able to look and see little bears in the window?’”

He then sent out an email to the families of students, which resulted in parents turning to their community Facebook groups.

Mescall has turned it into an Elf on the Shelf-type situation. She alternates Oreo and Charlie around, sometimes adding Cohen, a beige fluffy bear, to the upstairs window. It keeps it exciting, she said.

“You have something different to look for the next day. … Even at 45, I was more looking forward to my walk that next day. It took me a while to find the bears myself,” she said. “It just gives somebody a different focus than worrying about what’s going on.”

Just a little bit of positivity to get through the day, she added.