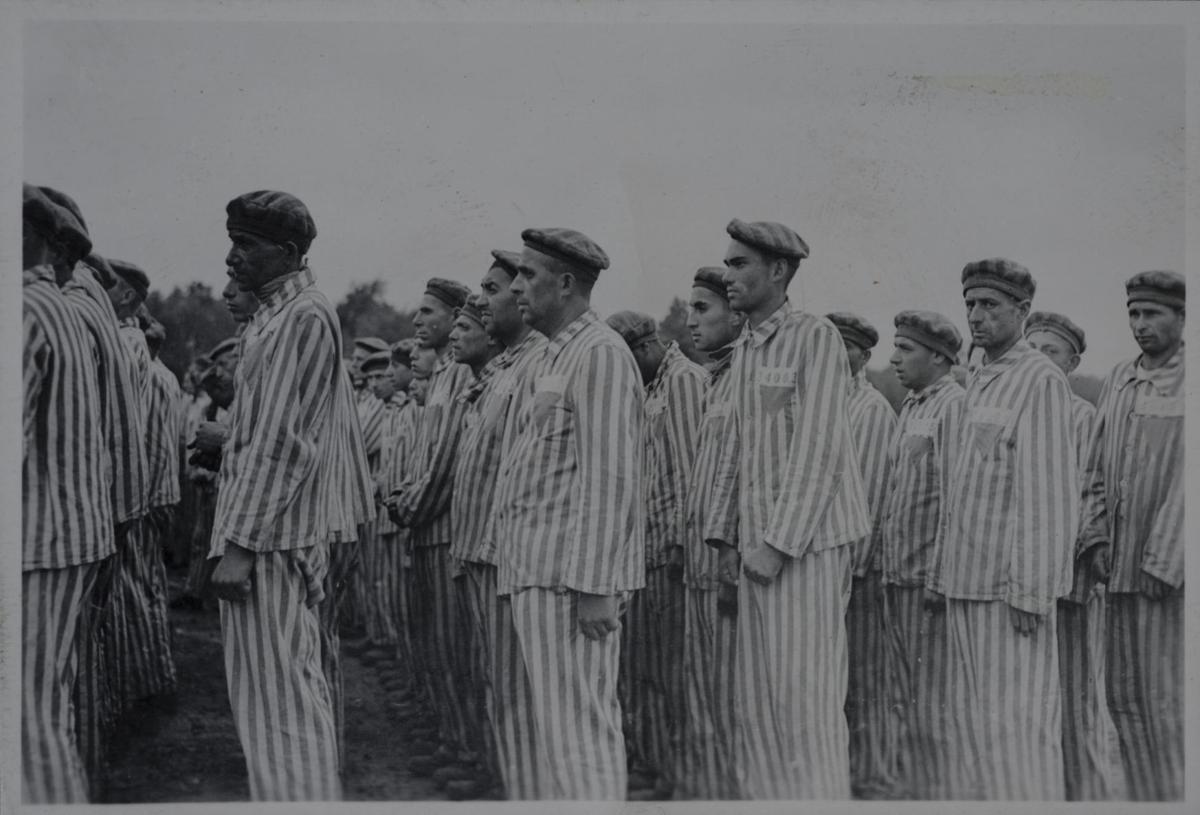 A photo album, compiled to mark the opening of the Buchenwald camp, shows prisoners, one of whom glances at the camera. A digital copy of the album has been received by the U.S. Holocaust Memorial Museum. 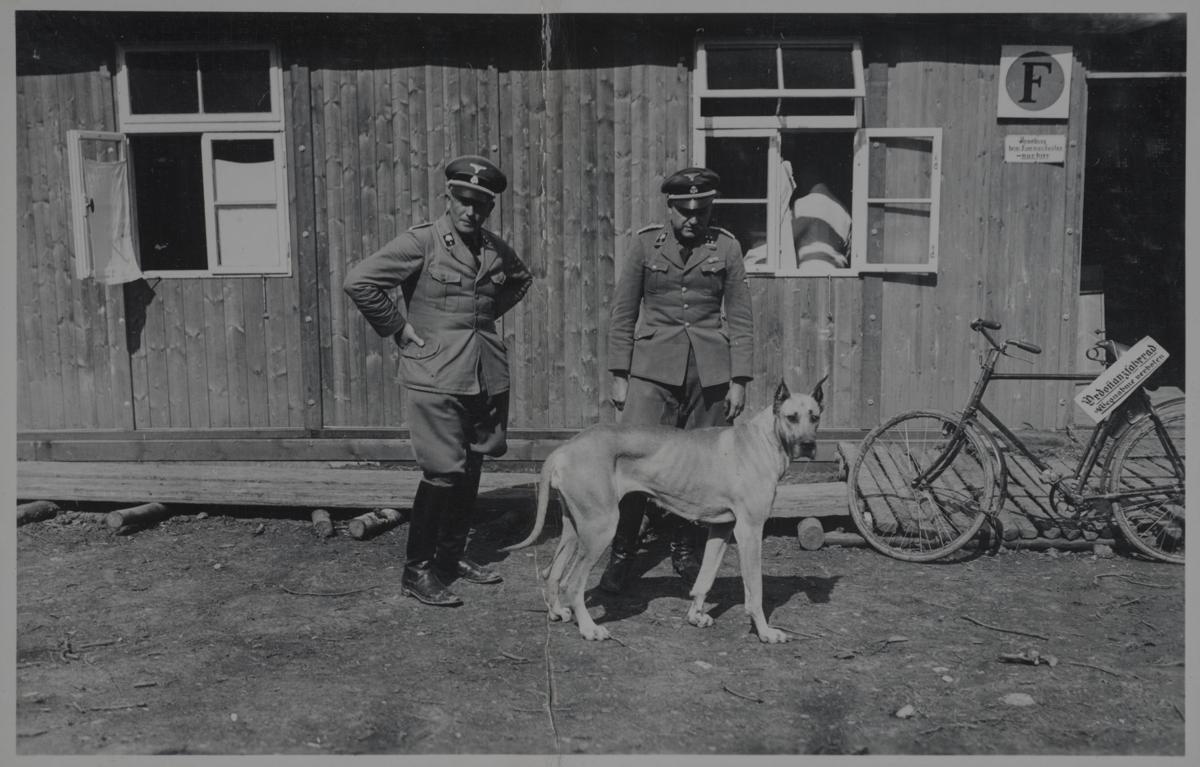 Karl-Otto Koch, the Buchenwald commandant who was said to be so brutal and corrupt that he was later executed by the Nazis (left) with a guard dog and another Nazi. 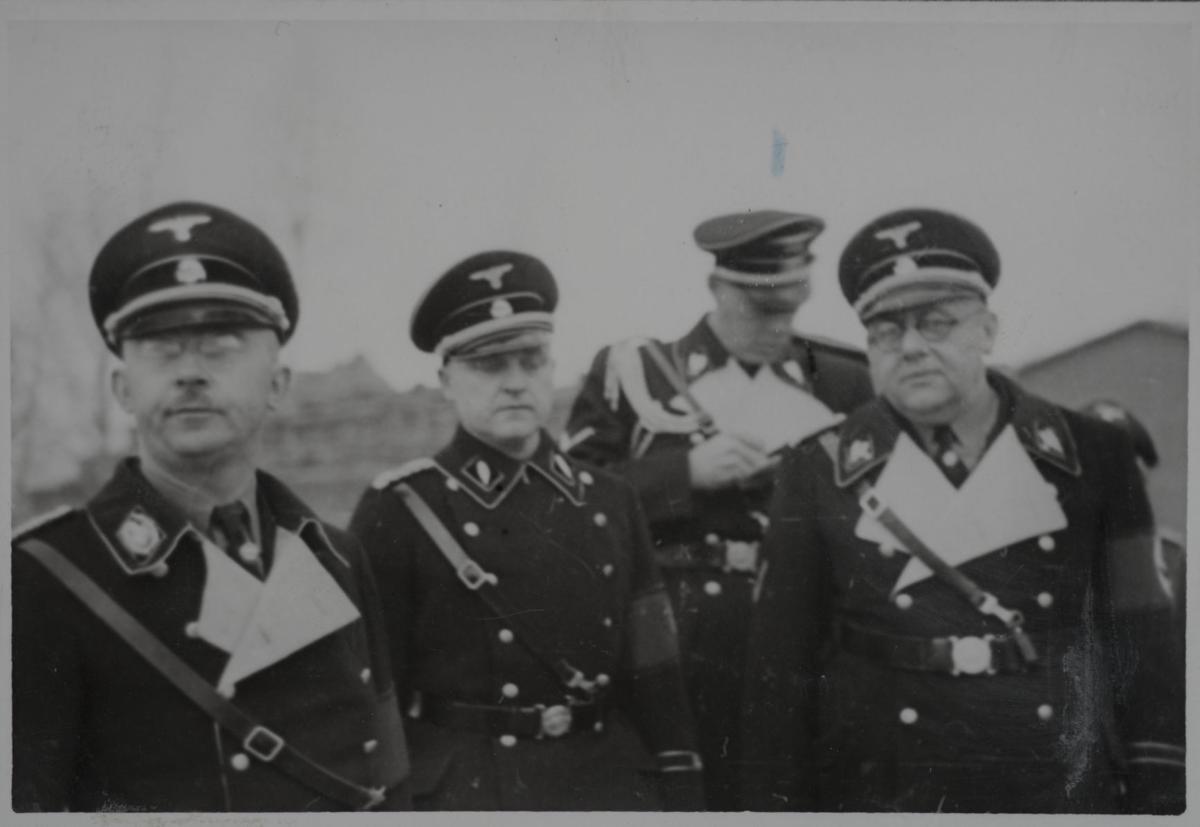 Heinrich Himmler (left) during a visit to Buchenwald. The photo was in an album that appears to have been compiled to mark the camp's opening.

WASHINGTON — The prisoner stood at attention in his striped concentration camp clothing just as the Nazi photographer snapped the picture.

He stood with other inmates who were lined up in formation, hands at their sides. All wore the same striped pants, shirt and hat. All had numbers sewed on their shirts. Almost all were facing front.

But this prisoner had glanced sideways at the camera, as if to history, and, with a click, he was captured with the fearful look of a man condemned.

The place was the Nazi concentration camp at Buchenwald, Germany, where the dead would soon be piled in heaps. The year was likely 1937, only at the start of the human catastrophe of the Holocaust. And the picture comes from a photo album compiled by the creators of the notorious camp to celebrate its opening.

The album is part of a huge batch of newly digitized evidence from the main Nazi war crimes trials at Nuremberg that has just been transferred to the U.S. Holocaust Memorial Museum in Washington from the International Court of Justice in the Netherlands.

Historians wanted to preserve the record of the trials before the fragile evidence deteriorated. There are also 250,000 pages of documents, along with films and 775 recorded hours of the proceedings originally captured on 1,492 metal phonograph discs.

Together they make up a major new digital collection of Nuremberg material, as well as a firsthand account of the famous post-World War II trials that detailed the breadth and depravity of Nazi crimes, museum officials said.

"Now, you have not only the textual material, but you have the sound material, the photographic material, and you have the motion picture film," said Henry Mayer, a veteran Holocaust researcher and senior archives adviser at the museum.

"It's the first time that all of this material has been basically readily available," he said. "It's a major accomplishment."

The Mémorial de la Shoah, the French Holocaust museum in Paris, which partnered on the project, has also received the digital trial evidence.

The idea to reproduce the evidence goes back a decade, said Radu Ioanid, director of the U.S. museum's international archival programs. The project got underway about four years ago. A formal agreement was signed in July 2017 to reproduce the records, he said. The digitization took place over two years, and the museum received the final deliveries last month.

Some of the items are known to modern scholars from other sources and in older formats, but some have rarely been seen or heard, the museum said.

For example, "the vast majority of those photos [in the Buchenwald album] are unknown," said Ioanid, an expert on Holocaust photographs. Most such Nazi photo albums did not show inmates, he said. "This album shows massively the inmates," he said.

The Holocaust was the systematic slaughter by the Nazis and their allies of more than 6 million European Jews and others before and during World War II in Europe, roughly from the late 1930s to the war's end in 1945.

After the war, the Americans, French, British and Russians rounded up all of the top Nazis they could find and put them on trial for war crimes in the bombed-out German town of Nuremberg, a former Nazi stronghold.

Ten would eventually be hanged. Others got long prison sentences. Three of the defendants, including the top surviving Nazi, Hermann Goering, killed themselves in their jail cells.

The Russian film showed mass hangings by the Nazis, executions by firing squad and a beheading.

The audio recordings, which cover the whole trial, are also unsettling.

One former Nazi official, Rudolf Höss, commandant of the Auschwitz concentration camp, gave an affidavit that was read in English while he was on the stand.

He stated that during his tenure, 2.5 million people were "exterminated" and 500,000 died of starvation and disease.

He explained how quickly people died in the gas chambers.

"It took from 3 to 15 minutes to kill the people in the death chamber, depending upon climatic conditions," he said in his affidavit. "We knew when the people were dead because their screaming stopped. . . . After the bodies were removed our special kommandos took off the rings and extracted the gold from the teeth of the corpses."

After the affidavit was read, Höss was asked if it was correct. "Jawohl," he replied in German. Yes.

Another affidavit, given by a German civilian construction manager, Hermann Graebe, and read in English by British prosecutor Hartley Shawcross, recounted the massacre of Jews at the Ukrainian town of Dubno.

Graebe watched as men, women and children were forced to disrobe, and were then herded down the steps of an open pit that was already filled with 1,000 bodies. There they were shot by a Nazi executioner.

"Without screaming or weeping these people undressed, stood around in family groups, kissed each other, said farewells," he said in his affidavit. "I watched a family of about 8 persons, a man and a woman, both about 50 with their children of about 1, 8 and 10, and two grownup daughters of about 20 to 24," he said.

"An old woman with snow-white hair was holding the one-year old child in her arms and singing to it," he said.

"I looked for the man who did the shooting," Graebe related. "He . . . sat at the edge of the narrow end of the pit, his feet dangling into the pit. He had a tommy gun on his knees and was smoking a cigarette."

Marie Claude Vaillant-Couturier, a French newspaper photographer who had survived Auschwitz, recounted in French how she watched a guard dog maul and kill a friend, while the dog's handler looked on, grinning.

She told of lice and rats, and of being forced to gather and stack the bodies of the dead and dying.

She told of seeing another friend being trucked off to the gas chamber. "Think of my little boy if you ever get back to France!" her friend called out to her. As the truck pulled away, those on board began singing the French national anthem, she testified.

The original trial evidence had been in storage at the International Court of Justice since about 1950, museum officials said.

The recordings "were in the basement . . . in the same wooden crates" in which they were sent, Mayer said in a recent interview.

"There was a problem, what to do with the material, because it's not accessible, and there's no way that anybody could listen to them or play them," he said.

Plus there was danger of deterioration, he said. "Something had to be done."

As for the films, Nuremberg "was the first time that film was used as evidence to try people," said Lindsay Zarwell, a film and video archivist at the Holocaust museum in Washington.

"These films have actually been available for a really long time" at the National Archives, she said. "But what's really amazing about these particular copies is that these were [made from] the actual ones that were shown in the courtroom."

They have "spectacular picture clarity, and the digitization work is really amazing," she said. "You see much more clarity than you would in the versions that we have seen and have been used by documentary filmmakers for years and years," she said.

For now, scholars must visit the museum to research the new holdings. (The trial transcript is available online.)

The Buchenwald photo album seems to have been made for Nazi officer Theodor Eicke, who helped create the concentration camp system. (He was later killed fighting the Russians.)

Buchenwald first held political prisoners, then Jews, Russian and some American POWs and slave laborers, according to the museum. Nazi medical experiments were conducted on prisoners there, killing hundreds.

Holocaust survivor and Nobel laureate Elie Wiesel was imprisoned there near the end of the war, and his beloved father, Shlomo, died there after being clubbed by a Nazi guard.

The album shows the camp's construction and visits by high-ranking Nazi officials, including Heinrich Himmler, a key architect of the Holocaust. (Himmler also killed himself before he could go to trial, as did Adolf Hitler.)

It shows prisoners arriving at the camp and being processed. One image shows several new prisoners sitting naked on stools outdoors while they are shaved and shorn of their hair.

The man in the striped prison garb glancing at the camera is unidentified. His fate and nationality are not stated.

Newly arrived, he still looks relatively healthy, and much different from the ranks of walking dead the Allies would find when they liberated Buchenwald eight years later.