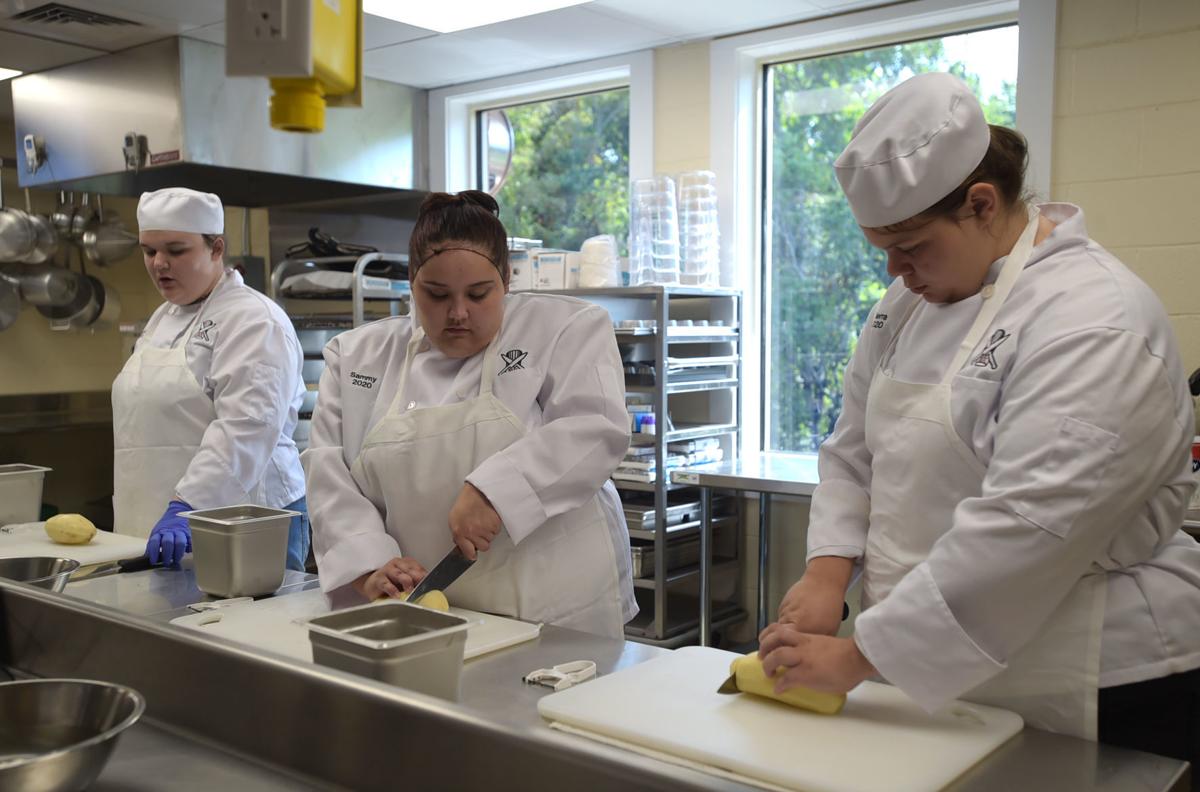 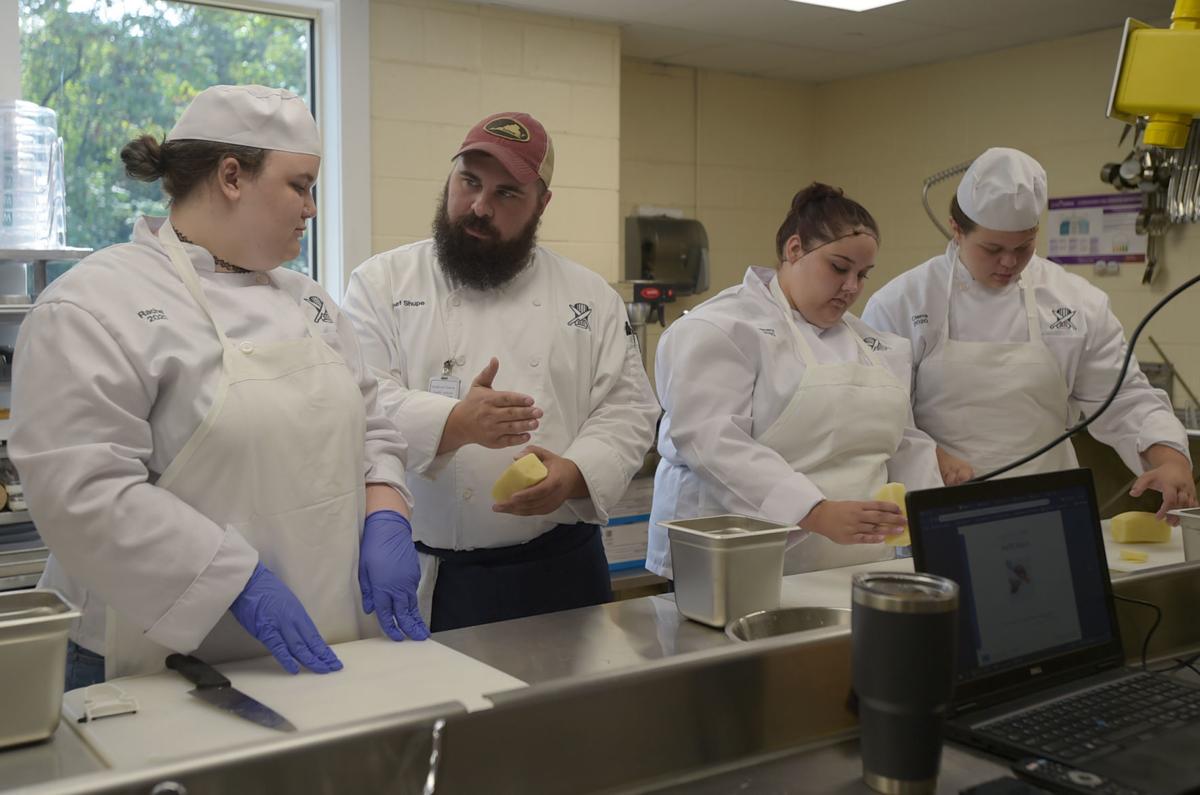 Chef Zac Shupe teaches students in the culinary arts program at the Bedford Science and Technology Center. Their kitchen is in the county’s Parks and Recreation building. 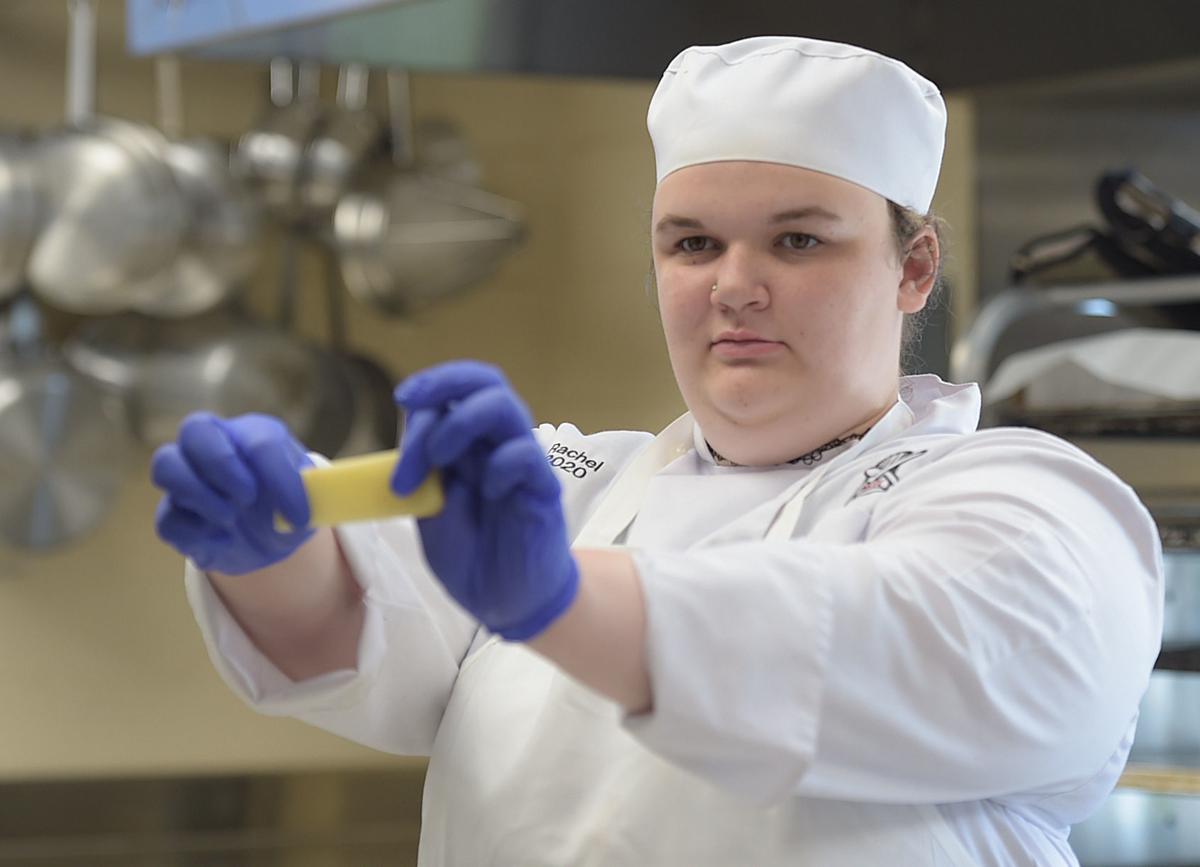 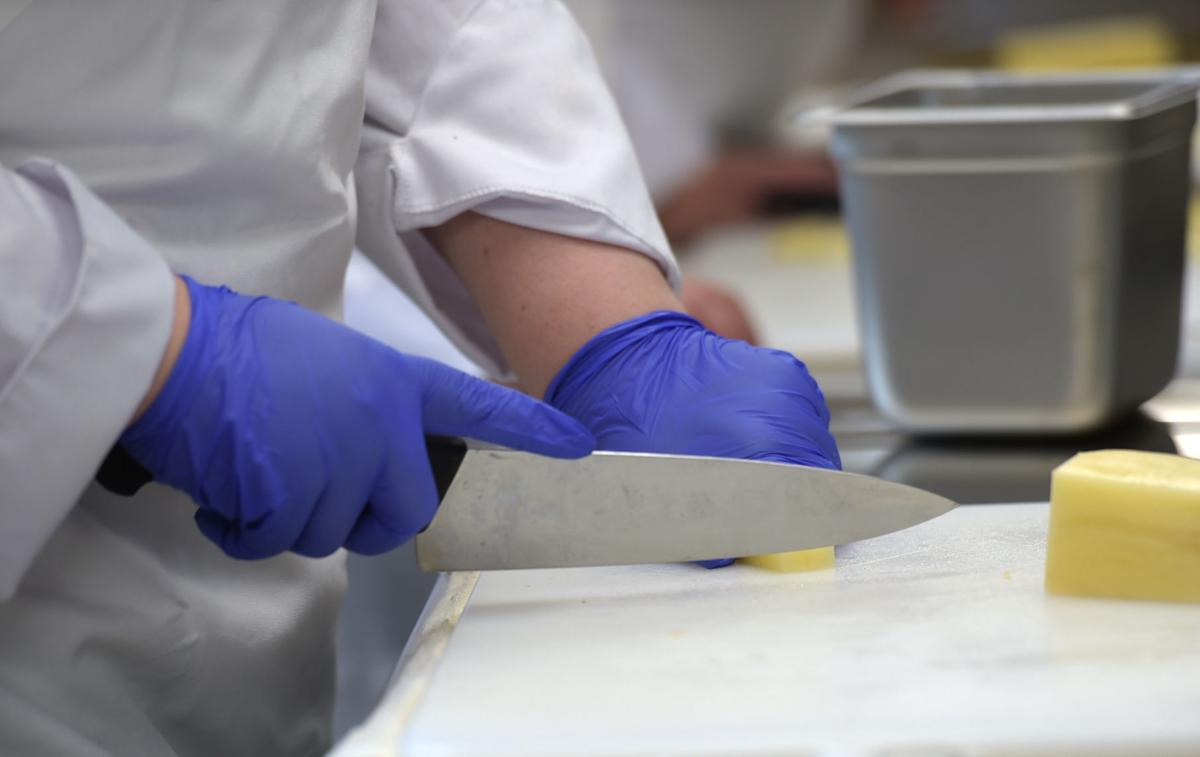 Rachel Witt, a senior at Jefferson Forest High School, cuts a potato during a culinary class for high school students at the Bedford County Parks and Recreation building in Bedford, Aug. 22, 2019.

Chef Zac Shupe teaches students in the culinary arts program at the Bedford Science and Technology Center. Their kitchen is in the county’s Parks and Recreation building.

Rachel Witt, a senior at Jefferson Forest High School, cuts a potato during a culinary class for high school students at the Bedford County Parks and Recreation building in Bedford, Aug. 22, 2019.

BEDFORD — Rachel Witt said her lifelong love of cooking nearly came to an end when she was 13 years old.

“I lost 83% of my vision after having brain surgery,” Witt said. “I didn’t think I would ever be able to cook again.”

However, the Jefferson Forest High School senior said she rekindled her passion for cooking with the help of a rehabilitation therapist.

“Once my therapist taught me how to cook again, I decided that I was going to culinary school,” Witt said. “I’m not letting anything stop me from doing that.”

Witt is getting a head start on her future plans through a culinary arts program offered at the Bedford Science and Technology Center.

The program — now in its second year — operates out of a full-size industrial kitchen in the newly renovated Bedford County Parks and Recreation building.

“It’s such a wonderful gift of space,” BSTC Principal Kim Halterman said. “We had to get pretty creative last year with kitchen space.”

Chef Zac Shupe — a Culinary Institute of America graduate and the program’s instructor — said classes last year had to be held in the kitchens of local churches.

“We had to improvise a lot,” Shupe said. “We are fortunate to have a space like this and are really grateful that the county stepped up.”

Shupe said the county’s donation of the kitchen makes Bedford’s program the only one in the Lynchburg area that has its own dedicated space.

“A lot of programs share space with cafeterias or [have] a kitchen that is shared by several programs,” Shupe said. “It is really nice to have our own space because it allows me to do so much more with my students.”

Shupe said the two-year program also is one of the few in the region taught by a graduate of the Culinary Institute of America.

“I know the program in Salem has a CIA graduate because he’s my father,” said Shupe, laughing. “But there aren’t too many in this part of the state.”

“We are really lucky to have Chef Shupe with us,” Halterman said. “He really brings a lot to this program.”

Students also have the opportunity to get training and certification that can help them obtain a job in the food industry while they still are in high school.

Before a student in the program can train in the kitchen, they must take a ServSafe course — the food industry’s leading certification program — and pass an exam to receive their ServSafe certification, which is nationally recognized.

The ServSafe certification typically costs about $1,000 to obtain, but students in the program receive it at no cost, Shupe said.

“The ServSafe certificate can help them get their foot in the door at a kitchen right now,” Shupe said. “Some students want to work in a kitchen now while they are going to school, and they can get some skills and training to help them do that.”

Shupe — who has run restaurants and catering operations in New Orleans, Los Angeles and New York City — said students are learning more than just cooking skills in the program.

“People tend to think that being a chef means you go into a kitchen and start cooking,” Shupe said. “There is so much more to it than that. The food business is a business, and we are teaching that side of it in this program as well.”

Shupe said the program already has six catering events booked this year that students will prepare and serve.

“A lot of people don’t realize that this is one of the most important aspects of running a restaurant,” Shupe said. “The higher education side of this industry is focused on that.”

“Those are wonderful programs and we certainly support them,” she said. “But this program is really about doing this out in the industry.”

Liberty High School senior Samantha Nestor said she was amazed at the operations side of the food industry.

“I have learned so much about how to price items and stock a kitchen,” Nestor said. “There was so much that I didn’t realize went into running a kitchen.”

“I wanted to know what motivated them to choose this program,” Shupe said. “I wanted to make sure that the students here were at least considering a career in the food industry and that they were industry-driven.”

Liberty High senior Cierra Waldron said the culinary arts program is helping her keep the promise she made to her grandmother before she died in 2016.

“When I was a kid, I wanted to be a teacher until I started cooking with my mother and grandmother,” Waldron said. “After that, cooking is all I ever wanted to do. Before she died, I promised her that I would continue down that path, and this program is going to help me keep that promise.”

Witt said she plans to use her skills to help others like she was once helped by her rehabilitation therapist.

“After I graduate from culinary school, I want to be a culinary therapist and help other visually-impaired people learn to cook for themselves,” she said. “I can’t imagine doing anything else with my life right now.”

Witt said she also enjoys showing off a little in her kitchen at home.

“I don’t cook a little at home, I cook a lot at home,” she said. “My signature dish would probably be chicken parmesan with zucchini-parmesan chips. However, I also have come up with a recipe for chicken chorizo tacos that I really like.”

Witt has Braille on her measuring cups in the kitchen and uses high-contrast cutting boards. Shupe put color-coded stickers on the controls of the stoves and ovens to help Witt compensate for her diminished vision. Witt also has special protective gloves to help her prevent cutting herself with a knife but rarely uses them.

“I don’t wear them that much anymore,” Witt said. “I’ve gotten to where I am just fine without them.”

Shupe said he will be adding more equipment to the kitchen in the future to accommodate more students with disabilities.

“It’s not impossible,” Shupe said. “I think we can make this accessible to anyone that wants to learn in this kitchen.”

Shupe said Witt has become one of his program’s best students and even represented the division in a statewide SkillsUSA competition last year.

“She stepped up as an alternate during the competition,” Shupe said. “And despite everything she has going on, she placed right in the middle of the pack. She is really something.”

“Seeing a young person like her overcoming obstacles is incredible,” Wilson said. “She has such a passion for what she is doing, and I think this program has given her a sense of empowerment. She has inspired a lot of other students with what she is doing.”

BCPS Superintendent Doug Schuch said that while he too is proud of Witt’s success in the program, he also is ready to eat.

“Our new culinary arts program and its state-of-the-art kitchen facility will provide many educational and career opportunities for our learners in Bedford County,” Schuch said. “I am looking forward to seeing this program thrive, and I hope to see Chef Shupe and his young learners demonstrating their new culinary skills at school and community events in the near future.”