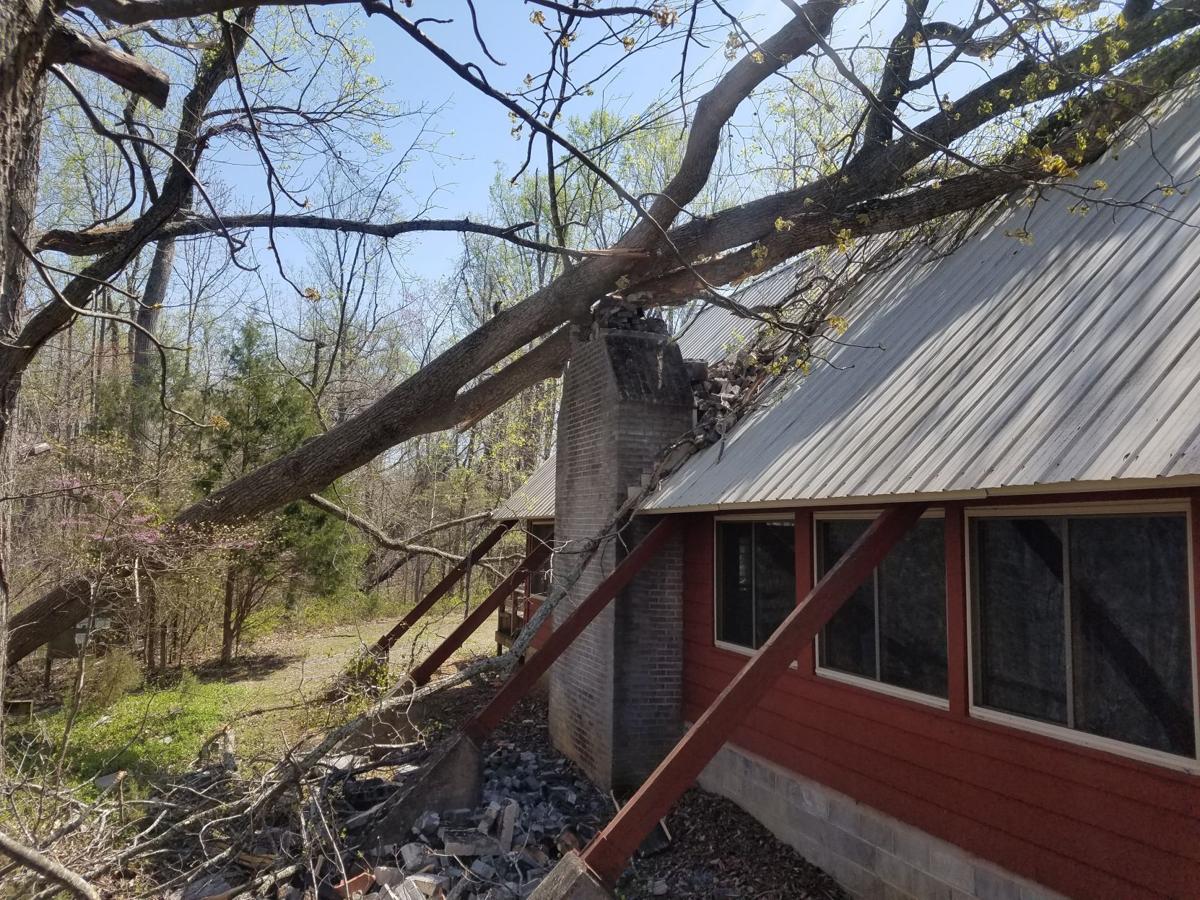 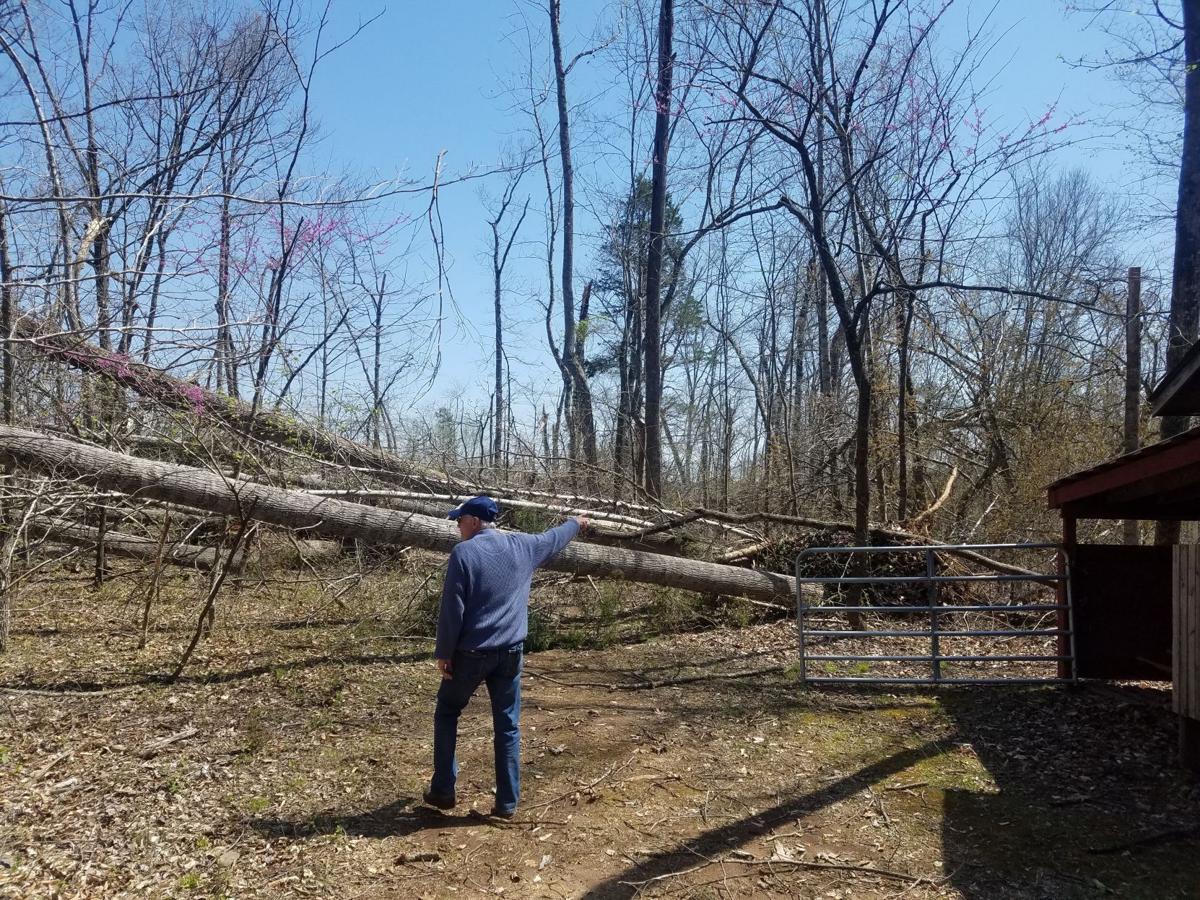 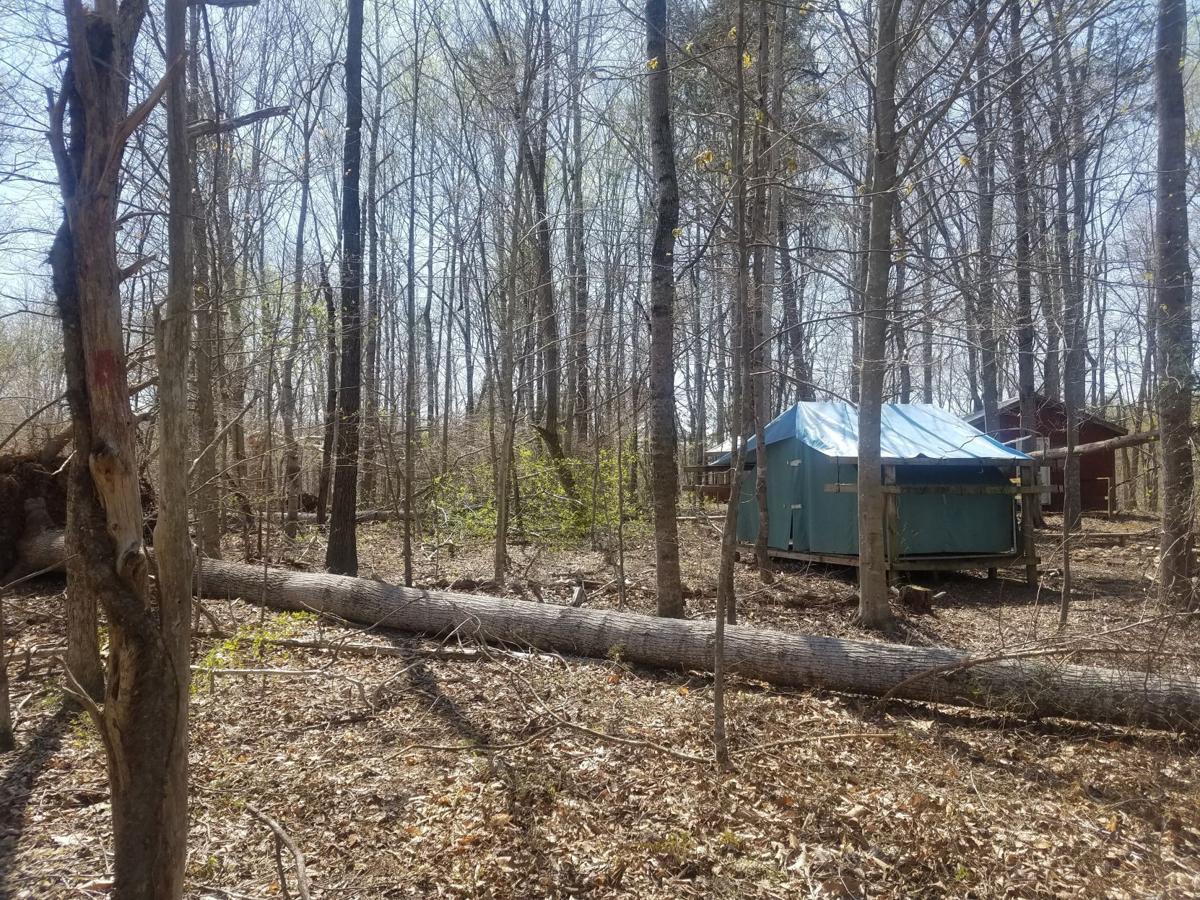 A fallen tree sits beside sleeping quarters at Camp Sacajawea in Bedford County on Wednesday, April 18, 2018. Several dozen trees fell throughout the property during the storm Sunday, April 15, 2018.

A fallen tree sits beside sleeping quarters at Camp Sacajawea in Bedford County on Wednesday, April 18, 2018. Several dozen trees fell throughout the property during the storm Sunday, April 15, 2018.

LYNCHBURG — As area residents continue to clean up from Sunday’s tornado, one longstanding “beloved place” near Boonsboro is seeking help from the community.

Camp Sacajawea, which has served the state’s Girl Scouts since 1952, suffered extensive damage in the storm, according to Jennifer Pfister, marketing and communications director for Girl Scouts of Virginia Skyline Council.

A group of neighbors who walk the property’s trails with permission when camp is not in session described the damage as “depressing” Wednesday. Downed power lines, twisted trees, and fallen branches littered the camp’s walking trails, sleeping areas and campfire pits.

Kathy Firth said those who live around Camp Sacajawea, which is located off of Fox Hill Road just over the Lynchburg line in Bedford County, like to keep an eye out for the property.

“I hope it can be cleaned up for girls to use this summer because I know they look forward to it,” fellow neighbor Susie Coggin said.

Camp Ranger Marc Johnson lives on the property with his wife and has worked at Camp Sacajawea for more than 30 years. He said the camp has created fond childhood memories for many in the area.

“It’s the kind of place where a girl can be a girl,” he said. “It’s tough for somebody to have the girl experience, and this is what makes us different from the Boy Scouts. … The reason I’ve been here so long is I believe in it. We truly build kids with character, courage and confidence.”

Pfister said she still remembers exploring “Camp Sac” with her own troop more than 20 years ago and was heartbroken when she saw photos of dozens of fallen trees on the property, including a giant, 150-year old oak tree that landed on Gay Lodge.

The lodge, built in 1958, is the largest facility on the property and has a sleeping loft, two decks, a stone fireplace and large meeting room. Johnson is hoping the camp will have to repair only the roof and chimney but said he has to wait until the tree is removed to assess the full scope of damage.

“Throughout the years, I’ve spent many a night there with my Girl Scout friends. … I hope it’s found structurally safe and can be saved,” Pfister added.

Another important part of the camp was leveled by the storm. The archery area, a favorite for many campers, was destroyed by falling trees. Lora Callahan, 17, who has attended or volunteered at Camp Sacajawea for eight years, said the damage to Gay Lodge and the archery range “was pretty devastating to see.”

“The service unit has put so much money and time into the archery field, so that was really upsetting to see that just flattened,” she said.

Johnson said he hopes to have the camp cleaned up and reopened within 30 days, but restoration of the archery range will take longer .

Camp Sacajawea serves Girl Scouts all over Virginia, and Pfister said they had to cancel several upcoming events because of damage to the camp. Since the storm, Johnson has received requests from people throughout the area to come provide assistance.

“The biggest thing that it proved to me is what a nice place Lynchburg is,” he said. “There’s just so much kindness.”

Johnson said the camp currently is not safe for anyone to come clean up because there are several downed wires and unstable trees throughout the property. However, once the area is secure, the Girl Scouts plan to have clean-up days in coming weeks, which will be announced on the group’s Facebook page at www.facebook.com/pg/gsvsc.

The group is also raising money to help rebuild the camp through a Facebook fundraiser page. As of Thursday morning, the page had raised $2,315 of a $25,000 goal. The council has insurance, but the fundraiser is to cover additional costs not covered by the insurance policy, according to the Facebook page. You can visit the page at http://bit.ly/2Hc9hn8.

With help from the community, Johnson said the camp will be operational in time for summer sessions.

A tornado with a maximum wind speed around 105 mph struck about four miles northwest of Moneta in Bedford County on April 15, the National Weather Service said in a preliminary report issued Thursday.