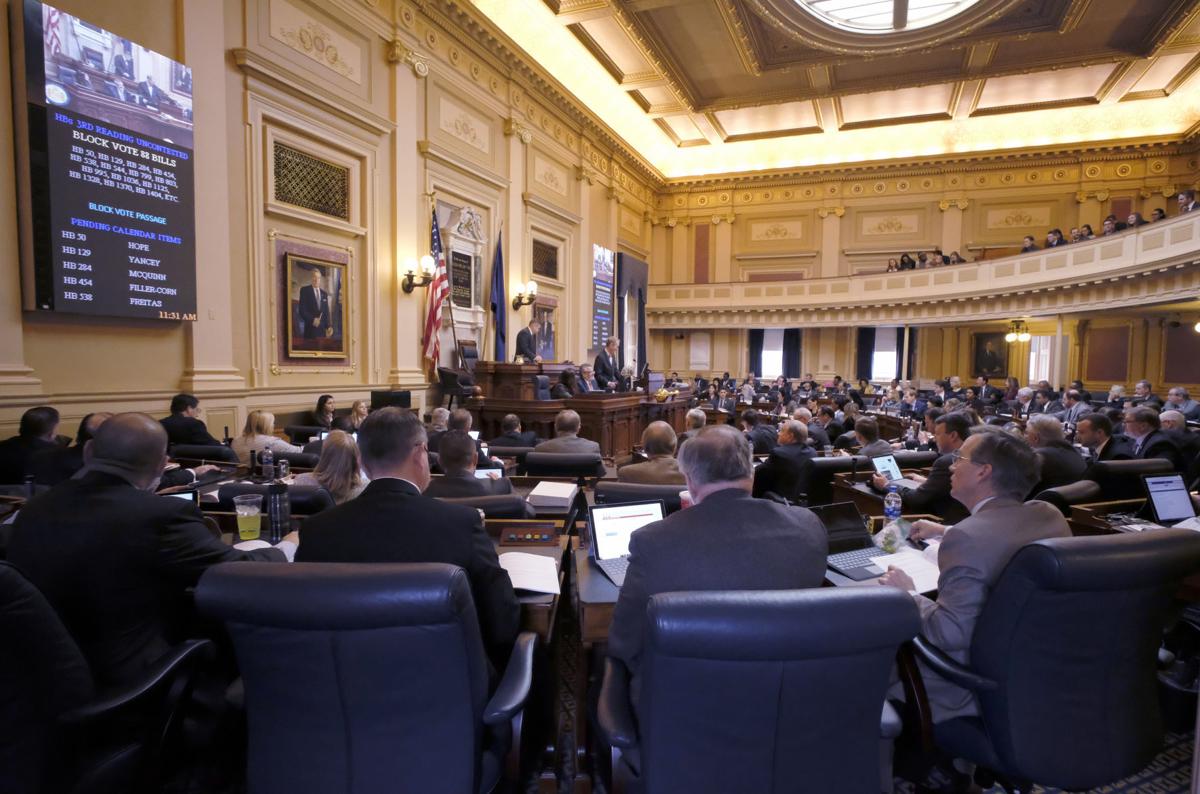 This year’s session of the Virginia General Assembly is scheduled to adjourn March 10. 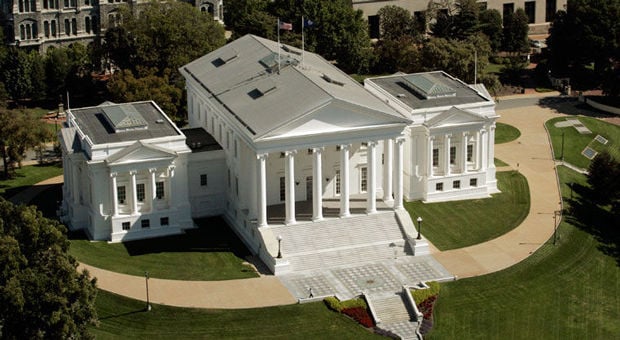 Virginia state Capitol, photographed from the roof of the SunTrust Bank building.

This year’s session of the Virginia General Assembly is scheduled to adjourn March 10.

Virginia state Capitol, photographed from the roof of the SunTrust Bank building.

Virginia’s new Democratic governor and Republican speaker of the House are heralding a spirit of cooperation that they say led to a productive first half of the General Assembly session.

The new atmosphere is due partly to the leaders’ less publicly combative approach in the post-Terry McAuliffe era. It also likely is spurred, in part, by the sweeping Democratic gains in the November House elections.

“The first half of this legislative session represents the most productive period I have seen since I came to the General Assembly in 2008 and we are just getting started,” said Northam, a former state senator and lieutenant governor.

House Speaker Kirk Cox, R-Colonial Heights, said at a news conference Wednesday, “Honestly, if you would’ve told me in December we would’ve accomplished this much in just the first half of the General Assembly session, I would’ve thought you were nuts.”

Now comes the hard part, as the governor and lawmakers seek to fashion agreements on health care, utility regulation, Metro spending and the state budget before the session’s scheduled March 10 adjournment.

Here’s a status report on key issues before the assembly.

This Sunday, the House and Senate money committees will approve competing versions of the state’s two-year budget for July 1, 2018, through June 30, 2020. The key question is whether either chamber will factor in federal funding to expand Medicaid. The budget that McAuliffe proposed in December, shortly before his term as governor ended, would expand Medicaid to accept $3.2 billion in federal money.

The Senate has voted to back a limited expansion of Medicaid services for up to 20,000 mentally ill, addicted and chronically ill Virginians, but it has not agreed on how to pay for the coverage. The House has backed a measure to seek federal approval of a work requirement for Medicaid recipients. The question is whether lawmakers will choose to accept federal money under the Affordable Care Act.

The Senate has backed a bill to generate $154 million a year for the embattled Washington Metro system, in part by raising and redirecting taxes on lodgings and real estate deeds in Northern Virginia. The House has backed a measure to raise $105 million a year for Metro without tax increases. A proposal to extend sales taxes to Uber and Lyft services to help fund transportation projects other than Metro has been removed from the Senate legislation. The Senate also backed a measure to impose a regional gas tax in western Virginia to fund improvements on Interstate 81.

The House and Senate have approved the utility regulation overhaul backed by Northam, Dominion Energy and some environmental groups. The House version includes a key difference — an amendment meant to prevent utilities from charging customers twice for billions of dollars in new spending to upgrade the electric grid and build new renewable energy generation.

Other issues of note:

The House and Senate backed differing bills to compensate four sailors who were wrongfully convicted of a 1997 rape and murder in Norfolk. The Senate bill would offer total compensation of $1.9 million to the “Norfolk Four,” while the House bill totals $3.5 million. Each bill is contingent upon the four reaching an agreement with Norfolk for sums of at least as much as the sums in the legislation.

The Senate backed a bill to extend the moratorium on allowing Dominion Energy to close coal ash ponds at four Virginia locations. The bill also directs Dominion to put out a request for proposals for recycling the ash and allows Dominion to close six ponds that have already had ash removed. A legislative study is also planned.

House and Senate panels defeated bills that would make it easier for Virginia localities to remove or relocate Confederate war monuments.

The House and Senate defeated bills that would make the children of illegal immigrants eligible for in-state tuition.

House and Senate panels defeated efforts to get the Equal Rights Amendment to the floor for debate. Virginia was one of 15 states that did not ratify the ERA by a 1982 deadline set by Congress.

The Senate backed a bill to let someone charged with possession of marijuana for the first time to later pay $150 to have the charge expunged.

In addition, senators approved bills to let someone charged with underage alcohol possession seek expungement after turning 21, and to create an expungement process for underage alcohol and marijuana charges five years after the individual has completed the sentence and probation.

The patron withdrew a bill to exempt administrative records of the judiciary from Virginia’s Freedom of Information Act.

The House backed a proposal to expand horse-race gambling in an effort to revitalize the closed Colonial Downs track in New Kent County. The measure would authorize gaming that lets players bet on horse races that already have happened, without knowing details of the races.

Legislation to make it easier to allow guns in churches cleared the Senate, but stalled in the House, where it was referred back to committee. House and Senate subcommittees killed bills to ban “bump stocks,” devices used to increase the rate of fire of a semi-automatic firearm.

The Senate backed legislation to give people convicted long ago based on later-discredited forensic science an avenue to appeal their convictions. Proponents said the case of Keith Allen Harward illustrates the need for the bill. Harward was wrongfully convicted of murdering a Newport News man and raping his wife based in part on forensic bite-mark evidence that was later discredited.

As part of a compromise announced by Northam and Cox, lawmakers agreed to raise the state’s felony grand larceny threshold from $200 to $500, a key Democratic priority. The deal also includes a key Republican priority — passage of legislation to keep criminal defendants on probation until they’ve paid back victims and require probation agencies to monitor the status of payments.

The House backed a bill that would enable nurse practitioners to practice medicine without a physician’s supervision.

The House passed a measure to create new rules for Virginia’s political mapmaking process as state legislators prepare to redraw the boundaries of General Assembly and congressional districts after the 2020 census. The bill says districts should respect existing political boundaries, serve communities of common interest and avoid the strange configurations both parties have long used to gain partisan advantage.

A House panel defeated bills that would have barred state subsidies for a new Washington Redskins stadium in Virginia and blocked localities from spending public money on professional sports facilities.

Northam and Cox announced a deal that will seek to reduce state regulations by 25 percent within three years. They backed legislation to set up a pilot program to target “burdensome and unnecessary regulatory requirements facing hard-working Virginians.”

The Senate backed legislation reflecting the ballot measure Richmond voters approved in November. It would require Richmond Mayor Levar Stoney to present a fully funded school facilities modernization plan to the City Council by Jan. 1, or say it can’t be done. Under the measure Stoney could not raise taxes to fund the plan. The Senate passed a bill giving Richmond businesses tax credits to help city students secure paid apprenticeships.

The House backed a bill meant to prevent cities from resisting federal immigration law in order to shelter undocumented immigrants who are accused of crimes. Gov. Ralph Northam says he will veto the bill if it reaches his desk. His spokeswoman said there are no sanctuary cities in Virginia and called the measure “a solution in search of a problem.”

The Senate backed a measure that would give prosecutors the latitude to charge “sexting” among minors as a misdemeanor. The intent is to keep teenagers who willingly share nude or partially nude images — without intent to harass, intimidate or extort money — from being convicted as felony sex offenders.

Both chambers have taken action to curb the school-to-prison pipeline. The House passed a bill reducing the maximum length of a long-term suspension from 364 calendar days to 45 school days, but its Education Committee killed a bill that would prohibit students in preschool through the third grade from being suspended or expelled, except for gun or drug offenses. The Senate passed its version of that bill, sending it back to the House.

In confirming a host of appointments by Northam, Republicans on a Senate panel removed Susan Swecker, chairwoman of the Democratic Party of Virginia, from the Virginia Compensation Board, a small agency that funds constitutional offices such as commonwealth’s attorney and sheriff.

The House backed a bill to give unusual tax breaks to companies that bring jobs to economically struggling communities. The bill would exempt from state income taxes for 10 years the employees of a business that locates in specified economically disadvantaged localities.

Saying Virginia should be 'open-minded' on casinos, Northam signals support for plan to reopen Colonial Downs

As he reviews legislation aimed at reopening the Colonial Downs track with a new way to bet on horse racing, Gov. Ralph Northam says he has no…