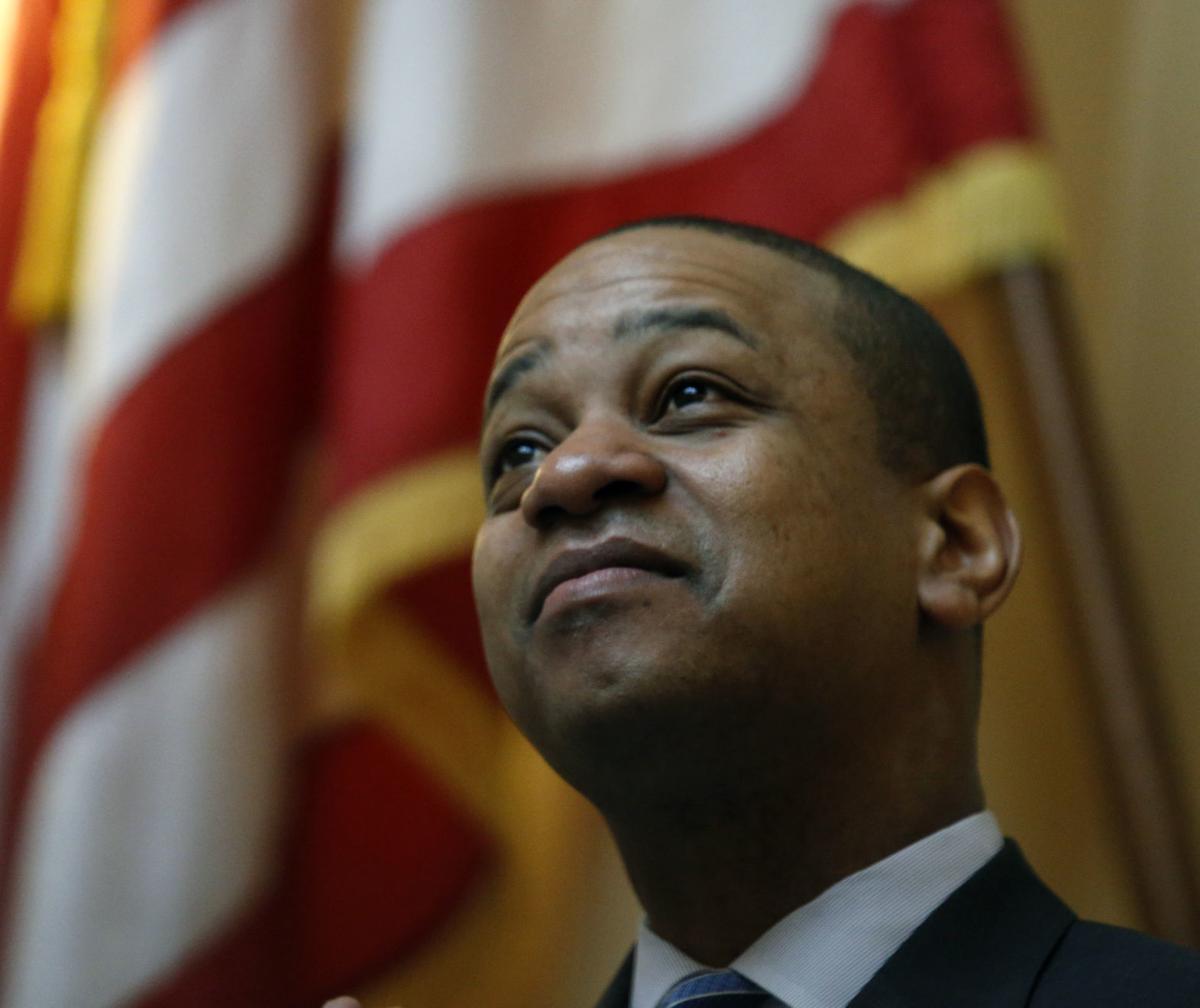 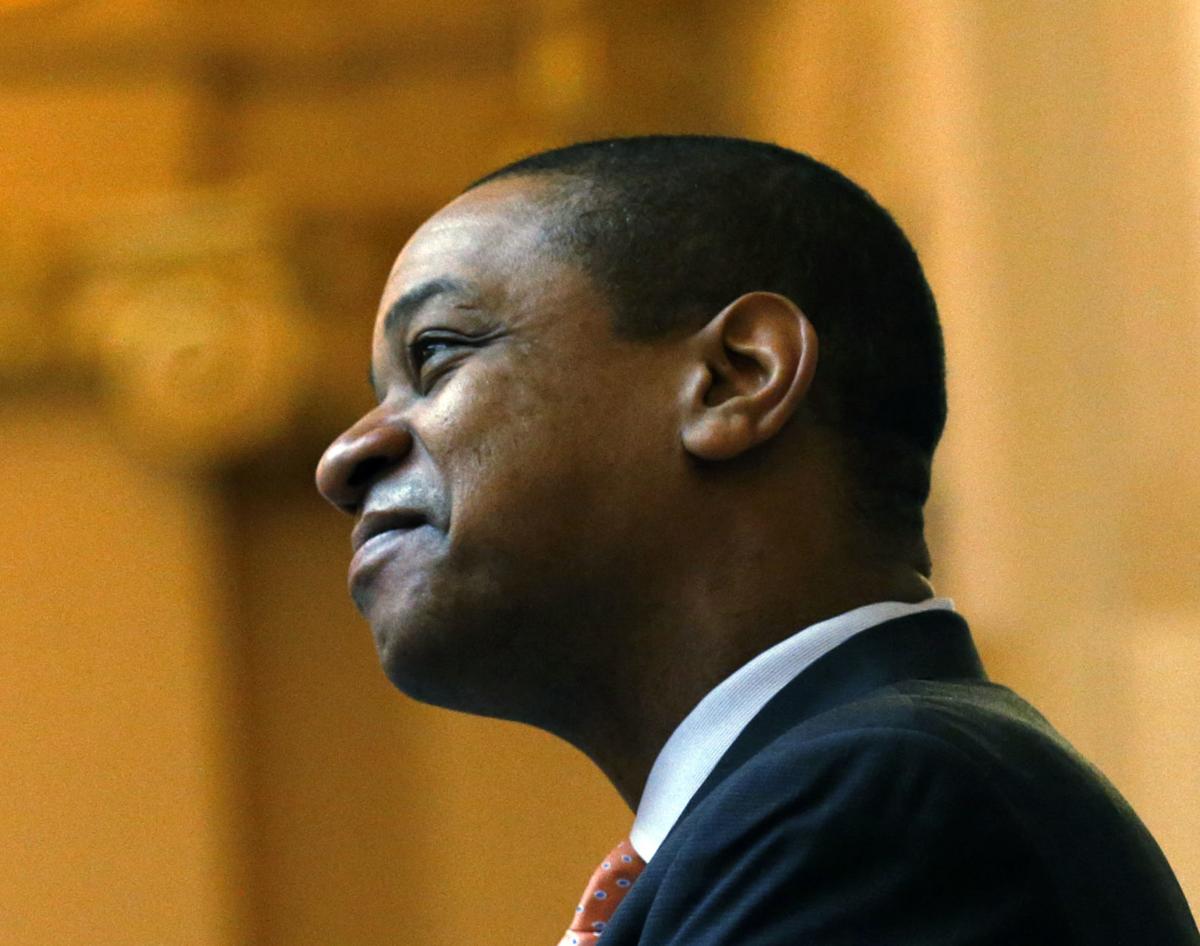 Lt. Gov. Justin Fairfax presides over the Virginia Senate after it was announced during the floor session of the House of Delegates inside the State Capitol in Richmond, VA Friday, Feb. 22, 2019, that the House Courts of Justice committee will hold hearings on the alleged sexual misconduct of Lt. Gov. Justin Fairfax. A date for the hearings has not been set. 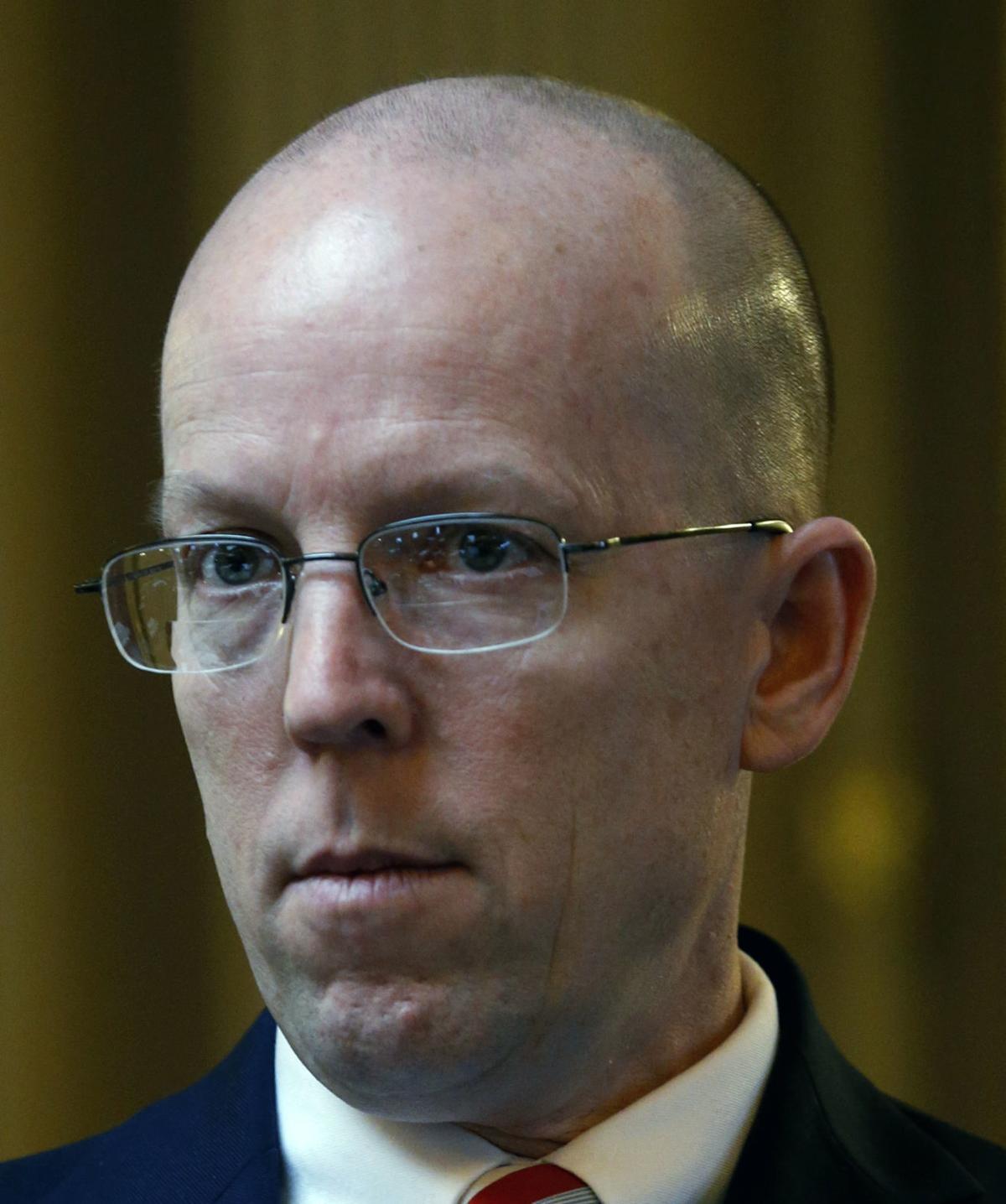 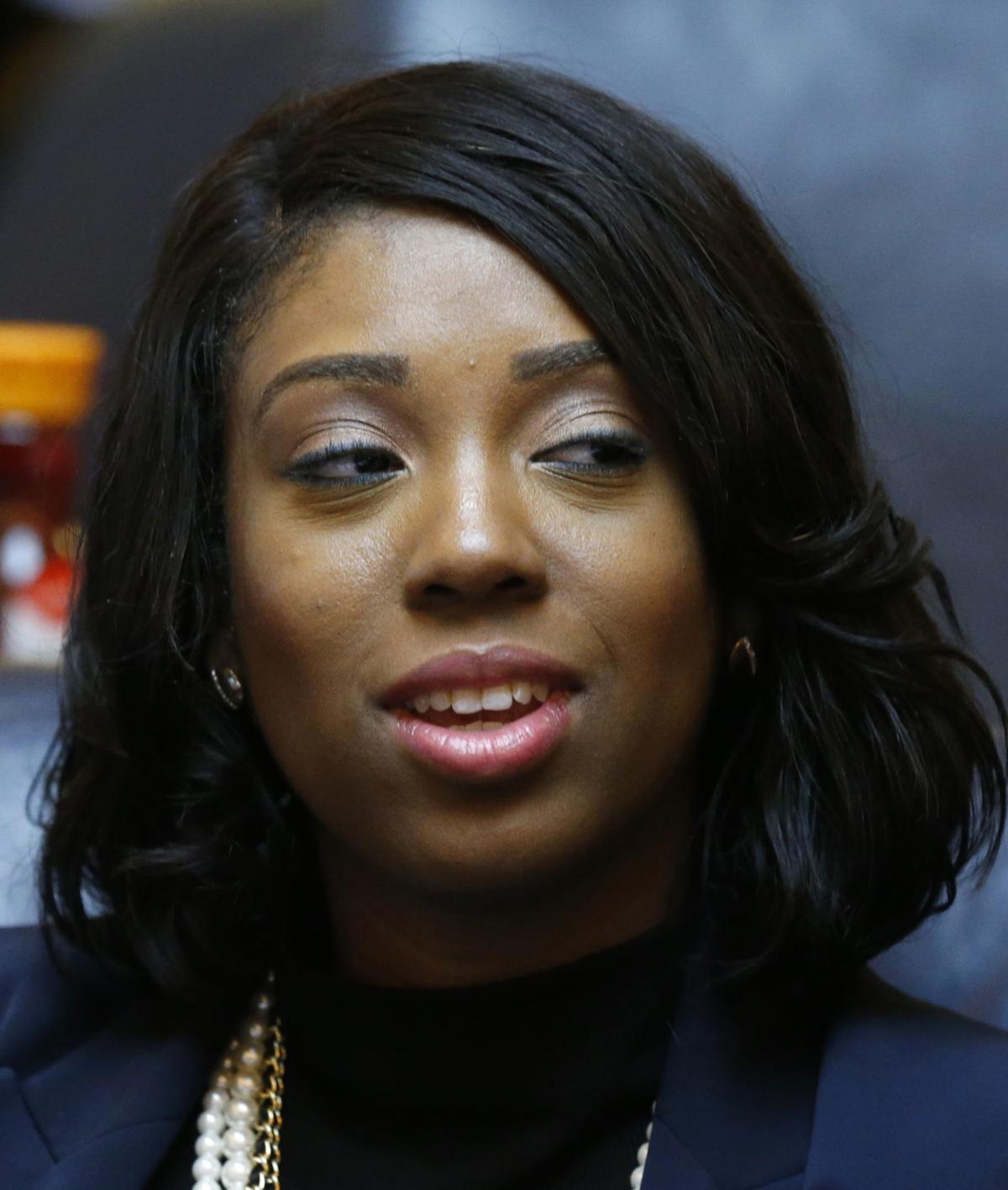 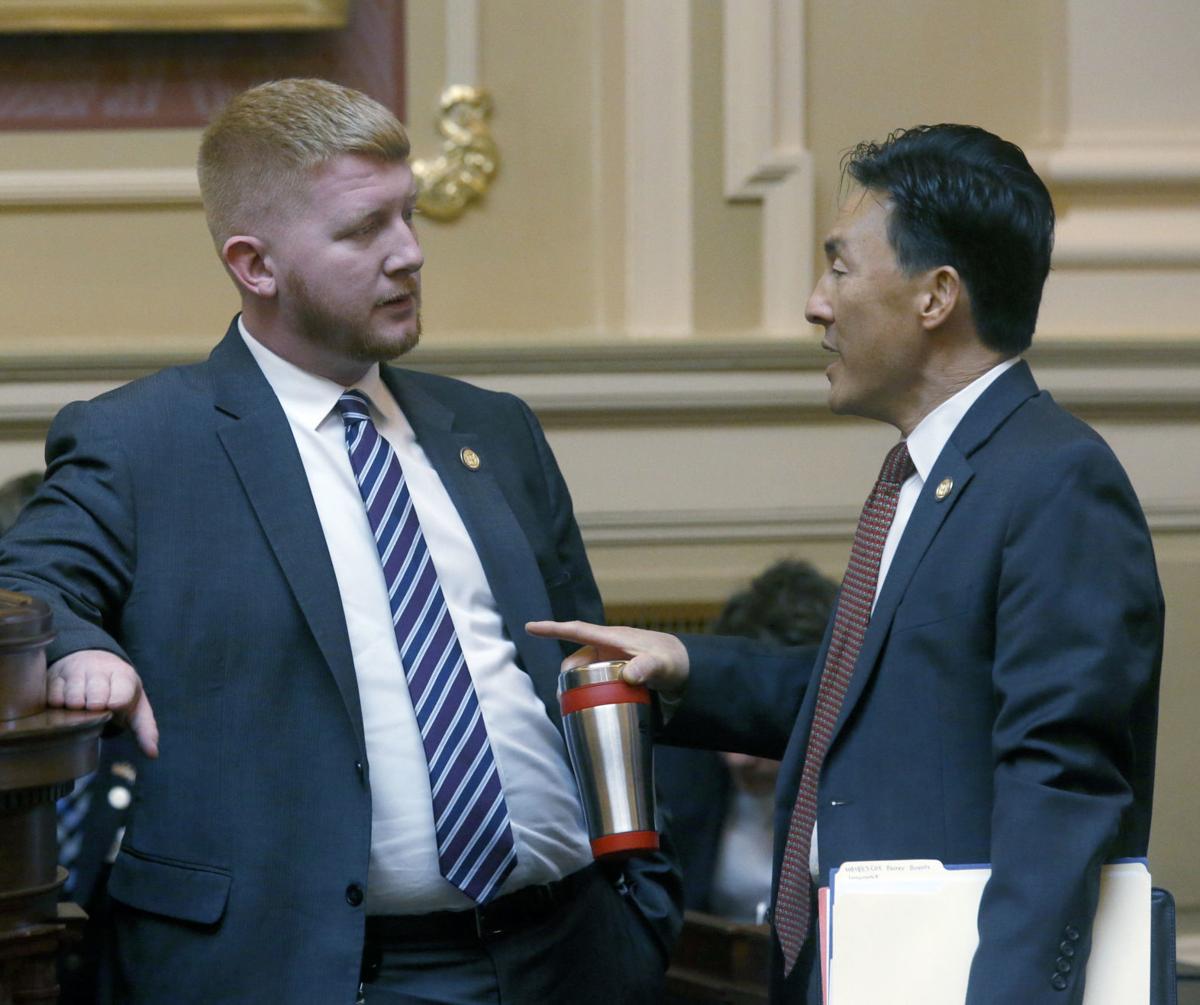 Lt. Gov. Justin Fairfax presides over the Virginia Senate after it was announced during the floor session of the House of Delegates inside the State Capitol in Richmond, VA Friday, Feb. 22, 2019, that the House Courts of Justice committee will hold hearings on the alleged sexual misconduct of Lt. Gov. Justin Fairfax. A date for the hearings has not been set.

A Republican lawmaker said Friday that he plans to hold a committee hearing to allow two women who have made sexual assault allegations against Lt. Gov. Justin Fairfax to appear before a General Assembly panel and tell their stories.

From the floor of the House of Delegates, Del. Rob Bell, R-Albemarle, said he will schedule a meeting of the House Courts of Justice Committee at a later date and allow Vanessa Tyson, Meredith Watson and Fairfax to speak.

“This will give all parties a chance to be heard,” Bell said.

Bell said he did not have a specific date in mind, and would need to coordinate with various parties before scheduling the meeting.

The announcement deepened the political battle lines being drawn over the Fairfax allegations as lawmakers prepare to close out the General Assembly session and turn toward this year’s legislative elections. Republicans have accused Democrats of trying to fight an investigation into one of their own. Democrats have said the GOP majority is pushing for a political show trial that will produce no justice for anyone.

Fairfax has adamantly denied the allegations, saying both encounters were consensual.

Watson’s attorneys quickly accepted Bell’s offer, saying in a statement that Watson “looks forward to testifying at this forum.” Tyson’s legal team took a more circumspect approach, saying Tyson had not received a formal invitation and does not want to be “embroiled in a highly charged political environment.”

“It is the duty of leaders on both sides of the aisle in Virginia to establish a bipartisan path forward that provides for due process for everyone involved and facilitates a thorough examination of the allegations,” Tyson’s legal team said in a statement.

In a new statement Friday, Fairfax spokeswoman Lauren Burke said the lieutenant governor wants a “non-political investigation by law enforcement.” Burke suggested the Republican maneuver was a way to distract attention from the House’s vote against ratifying the federal Equal Rights Amendment.

“Now suddenly the same Republicans want to distract the public from their record of opposition to women’s rights by engaging in political theater,” Burke said.

Burke said Fairfax is “confident the truth will exonerate him.”

“House Republicans want to pursue this historically unprecedented course of action because the accused is a popularly elected Democrat,” Burke said.

House Republicans have pointed to a provision in state code that empowers General Assembly committees to “order the attendance of any witness, or the production of any paper as evidence.” Anyone who denies such a summons, the statute says, can be imprisoned or fined.

Asked if House Republicans feel they have the power to force Fairfax to appear against his will, Bell said: “At this point we are simply inviting him.”

Bell said his committee would have the power to swear in witnesses before their testimony.

Bell’s announcement comes a day after House Republicans accused their Democratic counterparts of resisting a possible legislative investigation into the Fairfax allegations. Democratic leaders have said they are trying to ensure due process and don’t want to impede possible law enforcement investigations in Massachusetts and North Carolina.

The allegations have forced Democrats to make a difficult choice that could have ramifications with two key voting blocs: women and African-Americans. Democratic leaders have largely adopted the “believe survivors” mantra of the #MeToo movement. They’ve been hesitant to try to oust Fairfax, the only African-American currently elected to statewide office in Virginia, as Gov. Ralph Northam and Attorney General Mark Herring, both white, remain in office despite admitting to wearing blackface as young men.

The House Democratic Caucus has called for Fairfax to resign, but it was clear Friday that the party has deep internal divisions about how to proceed.

“We can offer no conviction. We can offer no real action,” Aird said. “And we will have taken all parties involved through a political exercise that in the end could actually cause more harm than good.”

The process should be handled by law enforcement, Aird said, not by “individuals who will be on the ballot in November.”

Del. Lee Carter, D-Manassas, disagreed, saying the General Assembly should respect the wishes of the accusers and shouldn’t force them to go to the police.

“Survivors of sexual assault are and should be entitled to choose whichever legal venue they desire to seek justice,” Carter said.

Carter, who said he was once raped and chose not to go to the police, said on Twitter that a Democratic colleague approached him after his speech, wagged a finger in his face and said: “You know you’re wrong.” Carter was visibly angry on the House floor after the alleged comment, exclaiming: “How dare she!”

Carter has previously tweeted that he did not report the alleged assault “because I did not expect any justice as a male survivor of rape by an intimate partner.”

Senate Republican leaders are skeptical of the idea that the General Assembly should play a role in investigating Fairfax. It wasn’t immediately clear Friday if the Republican caucus in the House is fully united behind the leadership’s plan.

Del. Terry Kilgore, R-Scott, a member of House courts committee, gave a noncommittal answer when asked if he’s on board with the idea.

Del. Patrick Hope, D-Arlington, who tried to introduce a Fairfax impeachment resolution earlier in the session to begin an investigation, said the process that Bell announced leaves “a lot of questions open” about how it will work. But he said he’s still hopeful the parties can agree on a workable path forward.

“If this is seen as a partisan exercise, nothing will come from it,” Hope said.

CBS to air interviews with Vanessa Tyson and Meredith Watson, who accused Fairfax of sexual assault

Vanessa Tyson and Meredith Watson, the two women who have accused Lt. Gov. Justin Fairfax of sexual assault, did interviews with CBS News that…

LOL! at the racist Northam voters making excuses for Fairfax.

Although I tend to believe the two women, they cannot achieve justice in a criminal court trial. They have waited too long to pursue criminal justice for accusations that even initially would had been extremely difficult to prove. The flip side is that Fairfax will now spend the rest of his life unjustly tarnished as an alleged rapist.

This is political bullcrap that both parties feel obligated to do for their supporters. If it sincerely sought to investigate the allegations, arguably it could be justified. But this is just politics that we all have come to accept.

Everyone wants a criminal process to unfold, why wasn't that done in the Kavanaugh hearings?

Itwas you just do not like the result and never will. What kind of criminal process do ypu want?

It's about time the no-account shiftless bums in the state legislature stepped up to the plate to conduct an investigation of Fairfax in this time of moral and political crisis.

Justin Fairfax is hoping that this all goes away. Meanwhile, he joins Jussie Smollett in denying everything.

Under what authority and to what end will the GA conduct it’s hearing? They need to stay in their lane and let the criminal process unfold. They don’t insert themselves into other alleged criminal matters and they shouldn’t do it here either.

correct...……...this is not a moral thing, it is pure politics

Totally agree. Opportunistic politicians seek to grandstand on an issue fit for Jerry Springer or Law-enforcement -where they politically have nothing to lose- to falsely appear concerned about women’s rights. But,hypocritically, cast their vote against real issues that advance women’s rights.

How dare Republicans investigate a Democrat.

The Democrats have a good argument. These are serious allegations that might result in criminal charges. This is some juvenile groping incident ala the Kavanaugh hearings. This is dead serious.

Bruce, I tend to agree. If a crime it's probable was committed, let's go about that process.

I absolutely agree. The General Assembly, inherently a political body, lacks the objectivity, expertise, resource, and money to conduct a proceeding that is fair to the accusers and the accused. It is purely a political ploy that will further alienate the Republican from their constituents and provide a forum in which the Democrats can continue their efforts to further their victimhood, entitlement, reparation agendas.

The accusers, whom I'm not judging, should file their complaint with law enforcement in the jurisdictions in which the alleged assaults occurred, Should there be sufficient evidence, then the prosecutors in those jurisdiction should go to a Court of Law where the Lt. Governor and the accusers will all be afforded due process in accordance with the Constitutions.

Fairfax should get the same kangaroo-court treatment from the republican VA GA that US senate dems gave Brett Kavanaugh. No quarter!