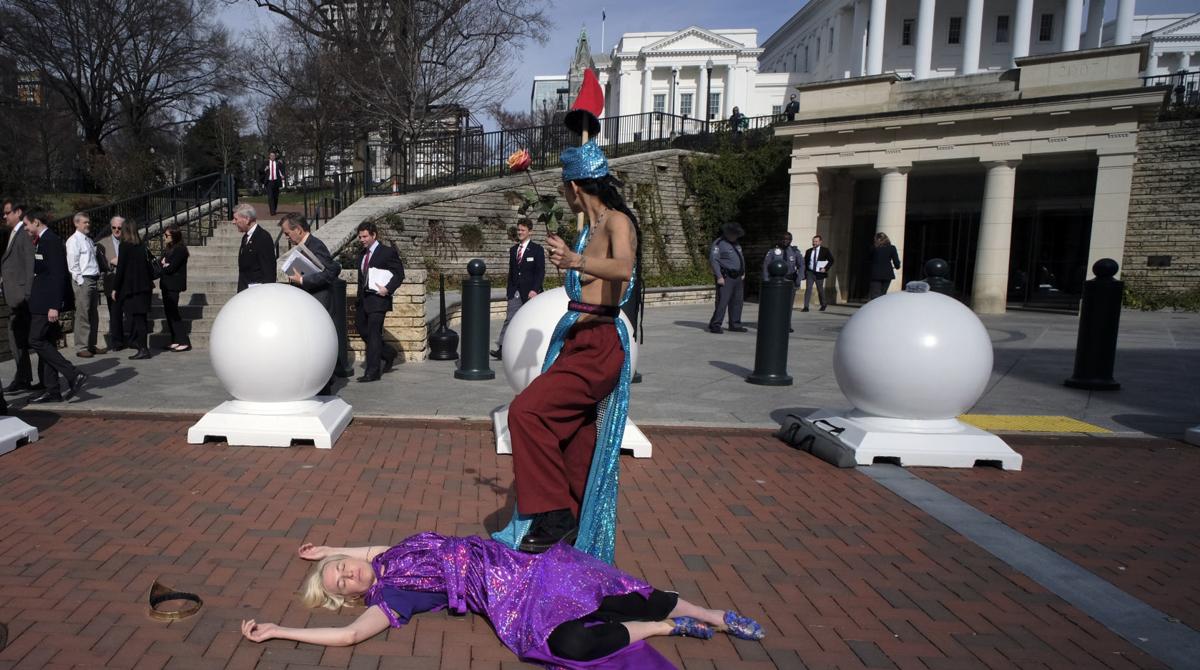 Michelle Renay Sutherland (standing) and fellow pro-ERA activist Natalie White mimicked the state seal in a bit of performance art Monday outside the Capitol on Monday. Capitol Police arrested Sutherland and charged her with indecent exposure after giving her a warning.

Michelle Renay Sutherland (standing) and fellow pro-ERA activist Natalie White mimicked the state seal in a bit of performance art Monday outside the Capitol on Monday. Capitol Police arrested Sutherland and charged her with indecent exposure after giving her a warning.

The pro-Equal Rights Amendment protester who was being held in the Richmond jail without bond after exposing herself in a protest is being released, according to her attorney.

A magistrate set bond at $700 for Michelle Renay Sutherland, 45, of Brooklyn, N.Y., after she exposed her breast during a bit of performance art on Monday in which she and another activist mimicked the Virginia seal.

But Judge Lawrence B. Cann III on Tuesday, during a video arraignment, ordered her held without bond.

Richmond Commonwealth’s Attorney Michael Herring and Sutherland’s lawyer, David Baugh, requested she be released on a promise to return for her March 21 court date.

The judge apologized in a court hearing on Thursday, Baugh said, saying he didn’t have the back story and only had paperwork showing the charge of indecent exposure when he ordered Sutherland to be held without bond.

In a phone interview after her release, Sutherland, an artist who goes by the name Sister Leona, said her video bail hearing on Tuesday was over in a minute. The judge asked if she had an address in Virginia, and she said she didn’t. A public defender then told her she was being held without bond.

“I was really confused,” she said.

Other inmates in the Richmond jail told her the decision was unusual, and Sutherland said that made her worried. The other inmates were in jail on charges of murder, substance abuse or domestic violence, she said, most of them awaiting sentencing.

“I made a ton of friends. I have a whole book of addresses,” she said. “One day I gave a talk about the ERA. Everybody sat around. ... None of them really knew anything about it either, so it was great.”

She and the other female inmates talked about the jail’s conditions, inequality and injustice.

“Basically it seems like the prison system is like a drug rehab,” Sutherland said. And while it’s a horrible place to be, “These women are just so awesome.”

“I really want their stories to be out there more, just what they’re going through.”

Sutherland said she is headed to Washington, D.C., on Thursday to get her belongings and then head home to New York.

She and fellow New York activist Natalie White, of a group called Equal Means Equal, on Monday were re-creating the state seal, with Sutherland playing the role of the Roman goddess Virtus, standing over a figure on the ground representing tyranny, played by White. Sutherland had one of her breasts exposed as lawmakers left the Capitol to head to their offices in the Pocahontas Building.

After warning her that she would be arrested for indecent exposure, Capitol Police arrested her. The judge’s decision to order her held without bond made national news.

While their activism generated more attention for the ERA, state House Republicans on Thursday stopped it from coming to a vote on the House floor.

Supporters of the ERA had hoped Virginia could become the 38th state to ratify it, and said doing so would have added it to the U.S. Constitution.

The proposed federal amendment says: “Equality of rights under the law shall not be denied or abridged by the United States or by any state on account of sex.” It provides that Congress shall have the power to enforce its provisions “by appropriate legislation.”

Richmond Commonwealth's Attorney Michael Herring said by email late Wednesday afternoon that he and the defense attorney for activist Michelle Renay Sutherland are both asking that she be released from jail with a promise to appear on her court date.

The right is really melting down over the chance that women might actually have their rights codified in the ERA. It will be much harder to defend the second amendment when they are criticizing the 28th.

Michelle Renay Sutherland is just another Leftist nut, like Ocasio-Cortez, and this whole issue has gotten far more media attention than it is due, but then that is the LEFTIST media. Just fine the woman for indecent exposure, and let's get this nonsense behind us, there ate far more important issues, like getting rid of the baby butcher and racist bigot, Governor Ralph Northam, as well as the racist Attorney General Mark Herring, and then there is Justin Fairfax, he needs his day in court, then if found guilty, he needs to go to jail.

You know the right is really getting desperate when they refer to a pediatric doctor as a baby butcher. But Fake News is Fred’s stock in trade. Everyone pretty much ignores him at this point after being caught in lies over and over again... like when he swears the SEO in MD stopped the school shooter who shot himself.

Pro-ERA protester who exposed breast says female inmates need more support …… Seems she should understand letting them hang out prevents the kind of support she needs. Hallelujah ….. and period.

The only support she needs is a good bra !

Back story??? Even with a "Front story", I cannot imagine any reasonable judge ordering a defendant to be incarcerated for a month on that lightweight charge! SMH!

Social Media Justice.....I thought the Judge is from the 9th Circuit Of Appeals... Anyway think about this.....Governor Northam can expose his chest with no issues.....but the same can't be done for females? I have seen man breasts that are much bigger than hers .....exposed.

And he is a judge?

Hooray, for what? The judge imposed a silly sentence totally out of line for the "crime". It won't stick, and it brings embarrassment (embreastment?) to the Commonwealth.

George You guys just think small. The entire stunt was to get as much attention as possible and she did it and the judge fell right in it.And she gets to have a rerun next month.

George, this time you do have a point, this is silly, charge her with indecent exposure, and fine her and be done with this.

George, we should be used to used to VA politicians and officials embarrassing the state. Remember when Del. Algie Howell Jr. proposed his "droopy drawers legislation" to fine guys with their drawers hanging out - that became a punchline on all the late night talk shoes.

a charge of indecent exposure gets one held without bond? even without the backstory? that's a whole lot of power in one breast!

Would 2 have been enough for you?

He obviously isn't a "Liberal" judge, or someone like you …. over-whelmed by the sight of a gun, loaded, or unloaded. Hallelujah …. and period.

Spacy Peter is showing a great disconnect with reality by claiming he can tell whether a gun is loses or unloaded just by looking at it.... and touchè!

Loaded breasts?...Did she just give birth?