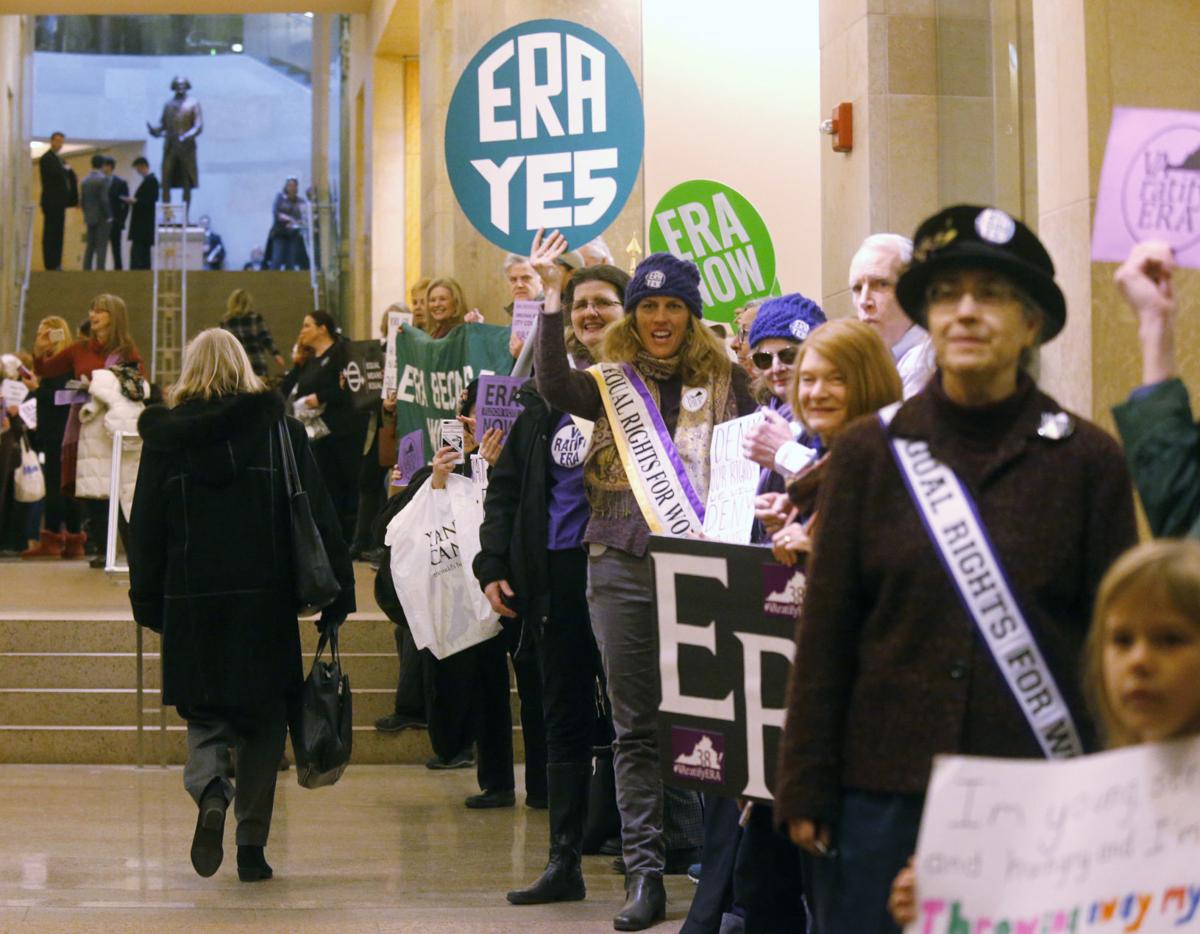 Supporters hold up pro-ERA sign in the hallway of the state Capitol in Richmond Monday. Legislators use the walkway to get to the House and Senate floors for the daily session. 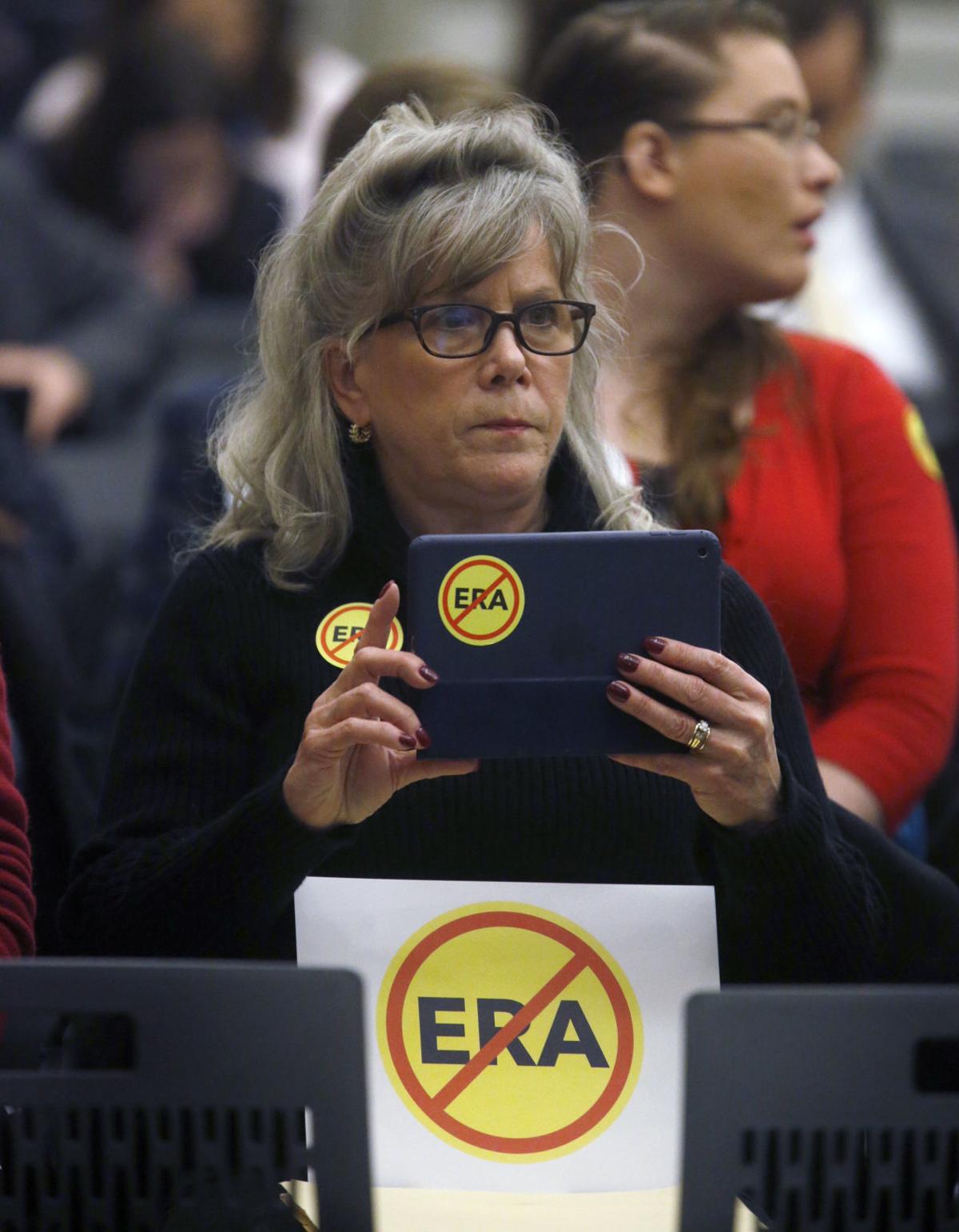 Prince William County resident Marie Hoerst showed her opposition to the ERA at the Capitol on Friday. 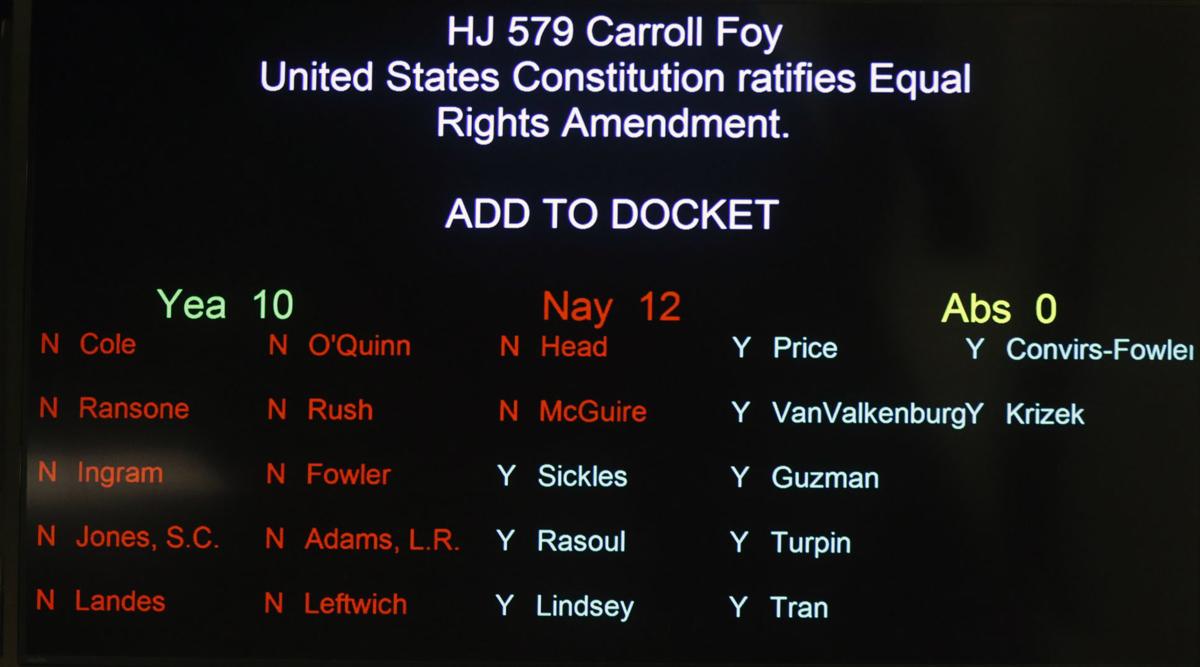 A House Privileges and Elections subcommittee defeated an attempt to bring the Equal Rights Amendment to the full panel for a vote.

Supporters hold up pro-ERA sign in the hallway of the state Capitol in Richmond Monday. Legislators use the walkway to get to the House and Senate floors for the daily session.

Prince William County resident Marie Hoerst showed her opposition to the ERA at the Capitol on Friday.

A House Privileges and Elections subcommittee defeated an attempt to bring the Equal Rights Amendment to the full panel for a vote.

An effort to revive a resolution to have Virginia ratify the federal Equal Rights Amendment failed Friday in a House of Delegates committee.

The women’s rights measure, backed by a major activist push, was voted down earlier this week in a Republican-led elections subcommittee, signaling House Republicans had no intention of passing the resolution that has already cleared the Senate.

On Friday, Del. Mark Sickles, D-Fairfax, attempted to put the resolution on the agenda for the full House Privileges and Elections Committee. The motion failed on a 10-12 party-line vote.

The proposed federal amendment says: “Equality of rights under the law shall not be denied or abridged by the United States or by any state on account of sex.” It provides that Congress shall have the power to enforce its provisions “by appropriate legislation.”

Supporters want Virginia to become the 38th state to ratify the measure and say that would add clear gender equality language to the U.S. Constitution; opponents, however, say an extended 1982 deadline Congress set for ratification has long passed and the ERA is moot.

The resolution passed the state Senate on a bipartisan 26-14 vote.

Conservatives have argued the resolution could have unforeseen consequences, such as wiping out restrictions on abortion.

House GOP leaders have shown little sign of changing course on the ERA. But Democrats could try additional maneuvers to attempt to bring it to another vote.

On Thursday, Del. Delores McQuinn, D-Richmond, gave a speech in the House urging her colleagues to bring the ERA to the floor.

“Words are powerful. Whether they’re written on a piece of paper or said aloud,” McQuinn said. “It may not be written this year, but I believe eventually change will come.”

The Virginia Citizens Defense League is 100% correct about the "guns in churches" issue. This is not an effort to make us into the wild west. It merely makes concealed-carry totally lawful during a church service in the same vein as it is on most other places that are private property. If a pastor wanted to ban guns, he could post signs indicating such & an armed citizen would have to disarm or leave. Under current law, the "good and sufficient reason" clause is too vague. Some people will think that there is no good reason at all, while other people would cite news headlines or other church shootings as reason to carry.

Speaker Cox, do the right thing and let this legislation meet its fate on the House Floor!

Redundant and unnecessary. The 14th Amendment pretty much covers equality under the law.

Pounding nails into their own coffin?

The ONLY reason it was tabled in committee is because it would pass if it was presented for a full house vote.

Melissa, even before the committee tabled it the amendment was DEAD. It could not have been revived. The only way to pass an ERA is for Congress to pass a NEW one and for states to ratify a new ERA. If that ever happens, a NEW ERA should not be overly broad in its wording.

I hope most people can see this is nothing more than a political stunt orchestrated by Abbie Spanberger’s liberal nut mother Eileen Davis and funded by outside groups to take control of Virginia. Same “tolerant” activist who attached Delegate Ransone for speaking out how women can accomplish anything with hard work. Perhaps Eileen Davis should take a look at what her daughter has accomplished without the ERA? The 14th Amendment is pretty clear and passing ERA would cause many laws to protect women to be nullified.

I am proud to be a liberal nut like Eileen Davis. Margaret Ransone is merely acting the drama queen and you, Mr. Roberts, are more afraid than any woman would or could be, of an equal rights amendment.

Ladies go burn your bras like you use too!!!!

Your arguments are baseless. The language has been simple since 1943. It is a codification of the natural rights inherent in all people.

And the state senate votes to allow guns in churches. Someone should cart Black and Carrico away in straight jackets. They are certifiable.

Sadly, ERA patron Glen Sturtevant voted yes to Guns in Churches. While voters in the 10th appreciate his stance on Equality, we won’t forget he stood with VCDL on this.

In some cases, they are already allowed under the current law......which is vague. The proposed change clears up the issue and makes it consistent with other private venues.