Virus in review: US states share, get creative in hunt for medical supplies. Get the latest here. 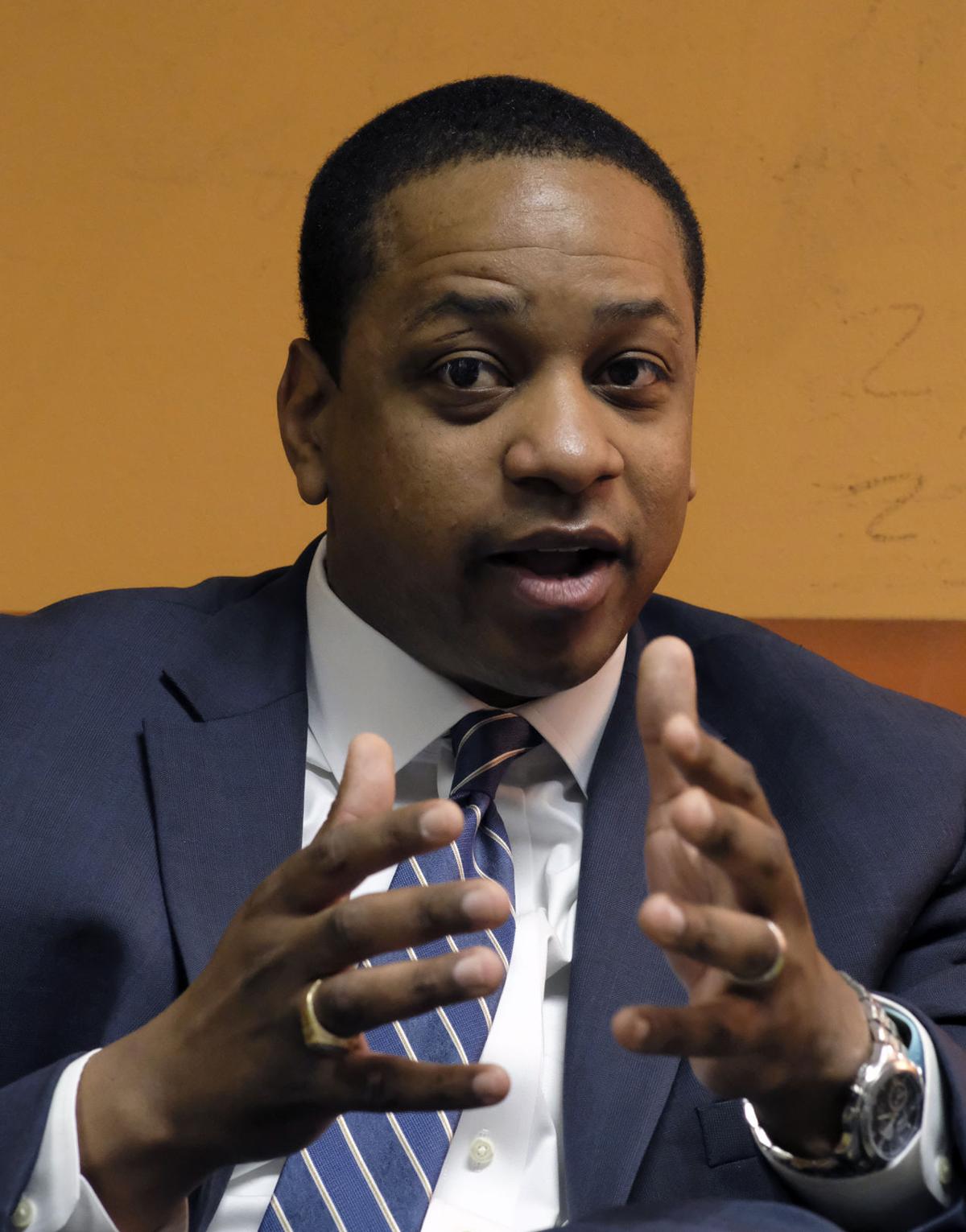 Justin Fairfax, one of three Democratic candidates running for lieutenant governor, talks with reporters at the Richmond Times-Dispatch in richmond, VA Thursday, March 9, 2017. 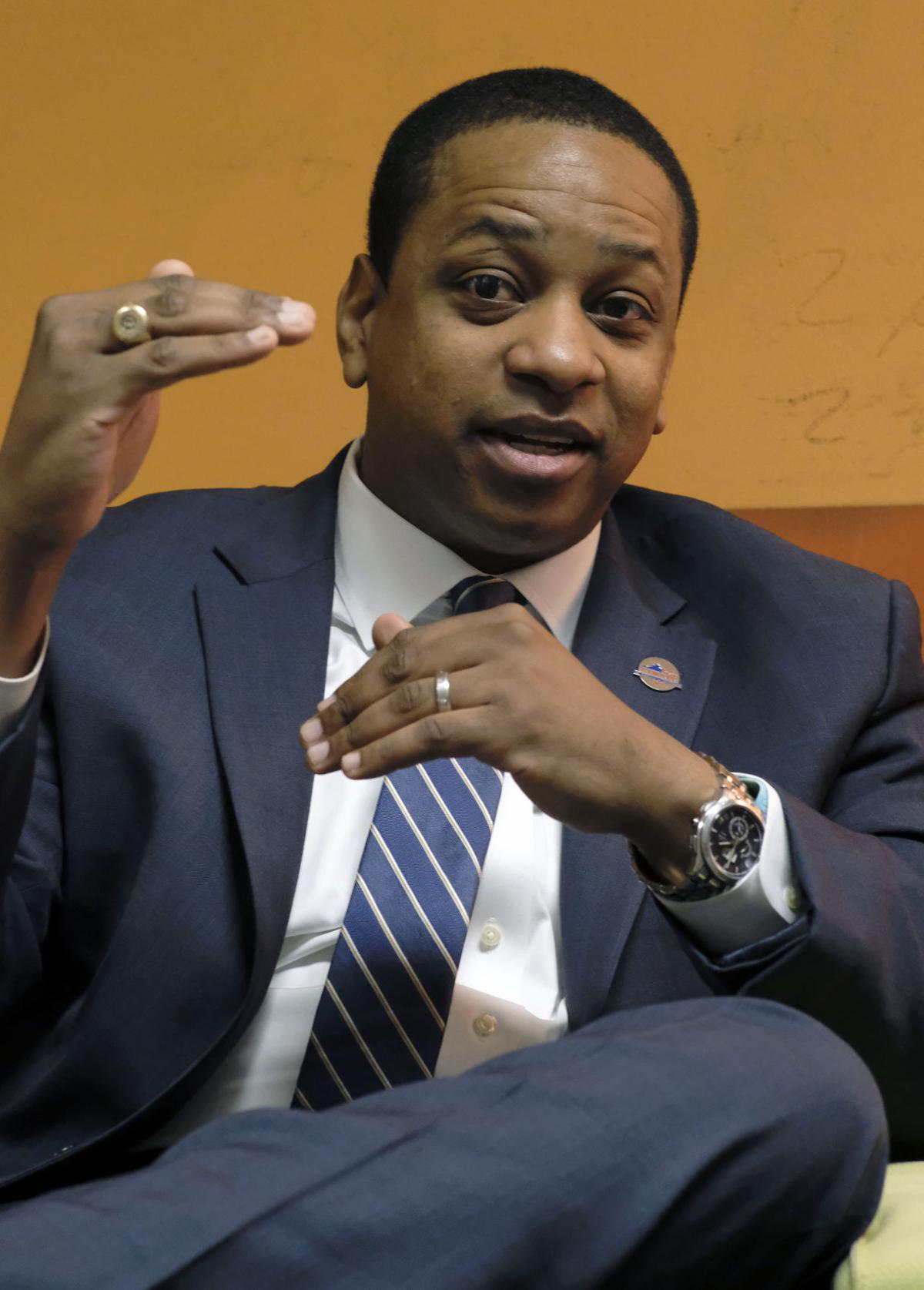 also are running for the Democratic nomination for lieutenant governor.

Justin Fairfax has a résumé made for politics.

Class president of a Catholic high school in Maryland, he completed his undergraduate degree at Duke University, then served as a “young trustee” on the college’s board. His law degree is from Columbia University, where he was selected for the law review, and he prosecuted criminals as an assistant United States attorney.

He received partial academic scholarships to both schools. His wife, Cerina, is a dentist who in 2015 was named Most Outstanding Alumna of the Last Decade by the Virginia Commonwealth University School of Dentistry.

Their kids are cute.

Despite the résumé, however, it hasn’t been simple for Fairfax to crack through the Virginia establishment of his Democratic Party, which currently occupies all five statewide offices with white men.

Having never run for office before, Fairfax ran for attorney general in 2013, narrowly losing in the Democratic primary to Mark R. Herring, who went on to win the general election in a squeaker.

Fairfax has not been a part of the club. He’s only spoken in passing with Gov. Terry McAuliffe, the state party’s effervescent leader and the mansion’s occupant for the past three years.

But Fairfax is running for statewide office again, and the vibe around him is slowly changing.

Last year, after he announced a bid for lieutenant governor, the Democratic Party of Virginia booked one of Fairfax’s potential competitors, Del. Eileen Filler-Corn, D-Fairfax, at a state party convention. Fairfax’s campaign called it unfortunate and puzzling that he was denied a speaking spot. A Democratic Party official then attacked Fairfax, saying he was trying to divide the party — but the party promptly apologized for the attack and called Fairfax “a rising star in Virginia.”

The party establishment didn’t find a candidate to enter the race for lieutenant governor against Fairfax this year. Two others are running in the primary: former federal prosecutor Gene Rossi and former Altria lobbyist and longtime Democratic activist Susan Platt, both of Northern Virginia. But with a large financial advantage, a campaign apparatus that’s been rolling since May and increasing numbers of endorsements, Fairfax may have broken through the establishment’s outer shell in his quest for the party’s nomination in a June 13 primary.

Fairfax raised more than $490,000 through the end of 2016, more than he spent in the entire 2013 primary. State Senate Democratic Leader Richard L. Saslaw of Fairfax County recently cut Fairfax a $1,000 check from his own campaign account.

“I’m going to support Justin Fairfax,” Saslaw said. “I think that he adds the most to the ticket.”

He quickly added that he finds “nothing wrong” with Platt or Rossi.

Has Fairfax become accepted by the party? “People who meet him seem to like him,” Saslaw said.

Such endorsements go mostly unnoticed by the public. But to the candidate’s campaign, Saslaw’s backing added to that of Senate Democratic Caucus Chair Mamie E. Locke, D-Hampton, and six other senators, was huge. The campaign sent out a news release with Saslaw’s photo, heaping praise on the senator.

In an age of outsider politics, people are looking for something new, said U.S. Sen. Mark Warner, D-Va. Fairfax was a co-chair for Warner’s 2014 re-election.

So who is Justin Fairfax, and how did he get where he is?

He grew up on Evarts Street in northeast Washington after his mother and his Harvard-educated father divorced. She moved him and his three siblings there from Pittsburgh when he was about 5. They first lived with his grandparents until his mother, a pharmacist, bought a row house across the street.

Fairfax, 38, of Annandale in Fairfax County, said he remembers 1980s Washington as rough. Several family friends were shot and killed, he said.

Fairfax said his grandparents gave his family a chance in their new city. The four siblings all went to Catholic schools, and Fairfax was in the National Honor Society and was senior class president at DeMatha Catholic High School in Hyattsville, Md.

His mother put all four children through college. The oldest, Roger Fairfax Jr. is a Harvard Law graduate and senior associate dean for academic affairs at the George Washington University School of Law, essentially the vice dean. Sister Virginia Posey is a labor and delivery nurse in Maryland, and brother Christopher Fairfax is an engineer in Virginia in the defense industry.

Dawn Cook, the sister of Fairfax’s wife, was in the national news this month. She is a pilot for Delta Airlines and was the first officer on the airline’s first mainline flight with two black women in the cockpit.

Like Fairfax, his wife attended Duke for undergrad. She runs her dental practice in Fairfax County.

Justin Fairfax is on the board of the university’s Sanford School of Public Policy.

After graduating from Duke, Fairfax worked in junior political jobs — first in Nashville for the 2000 presidential campaign of Al Gore as a briefing coordinator for his wife, Tipper Gore, and later in the Washington office of then-U.S. Sen. John Edwards of North Carolina. Fairfax worked as a clerk to U.S. District Judge Gerald Bruce Lee, who officiated his wedding.

He left the U.S. Attorney’s Office in Virginia’s Eastern District in 2012 for his 2013 run for attorney general.

He’s now a litigator with the law firm Venable LLP in Tysons Corner. Among other cases, he currently is representing a Loudoun County woman who is expected to testify in a corruption case in Florida against former U.S. Rep. Corrine Brown, who is under indictment.

Fairfax represents a woman who ran a small charity in Loudoun County. Brown, a Democrat, is alleged to have funneled money to it, then used that money for her personal benefit.

Fairfax is politically ambitious. When asked about his reason for running, he said it’s personal — he’s been blessed with successes, and now he wants to repay what he calls a “spiritual debt.”

“What we saw (in 2013) was that there was an incredible energy out there of people, many of whom had not participated in the political process before, but were touched by that message of repaying a spiritual debt.”

His campaign chairman is Larry Roberts, a partner at his law firm who was the chairman of U.S. Sen. Tim Kaine’s successful run for governor in 2005 and Kaine’s run for Senate in 2012.

His policy priorities include focusing on college affordability, reforming the criminal justice system and protecting civil rights and voting rights. He railed against President Donald Trump’s proposed cuts to pollution cleanup in the Chesapeake Bay, and on International Women’s Day referred to himself as “a proud feminist and the vice-chair of Planned Parenthood Metropolitan Washington Action Fund.”

Like other statewide candidates, he also puts a focus on the economy. Although the job of lieutenant governor is part time and requires presiding over the state Senate when the General Assembly is in session, the office is seen as a launching pad for a possible bid for governor.

Fairfax said he doesn’t refer to Platt and Rossi, the other two contenders, as “opponents.”

“My view is people decide to run for office,” he said. “They’re entitled to do that and put forward their vision.”

Fairfax would be only the second African-American elected to statewide office in Virginia. Democrat L. Douglas Wilder served as lieutenant governor from 1986 to 1990, then became the nation’s first elected black governor, serving from 1990 to 1994.

Three other African-Americans have been unsuccessful major-party nominees for statewide office in Virginia: E.W. Jackson, the GOP nominee for lieutenant governor in 2013; A. Donald McEachin, the Democratic nominee for attorney general in 2001; and Maurice A. Dawkins, the 1988 Republican nominee for U.S. Senate.

State Sen. L. Louise Lucas, D-Portsmouth, said Fairfax’s progressive views and strong showing in the 2013 primary along with his legal skills and respect in the legal community led her to endorse him.

“He’s going to be good on the issues and he’s electable,” she said.

Quentin Kidd, political science professor at Christopher Newport University, said Fairfax still has a primary to win, “but he holds a lot of cards right now.”

Any personality conflict between Fairfax and the party establishment would need to end if he’s the nominee, Kidd said.

“He’s going to be the only minority on the ticket no matter what if he wins. And that’s going to be important because African-American voters make up a large part of the electorate in gubernatorial races,” he said.