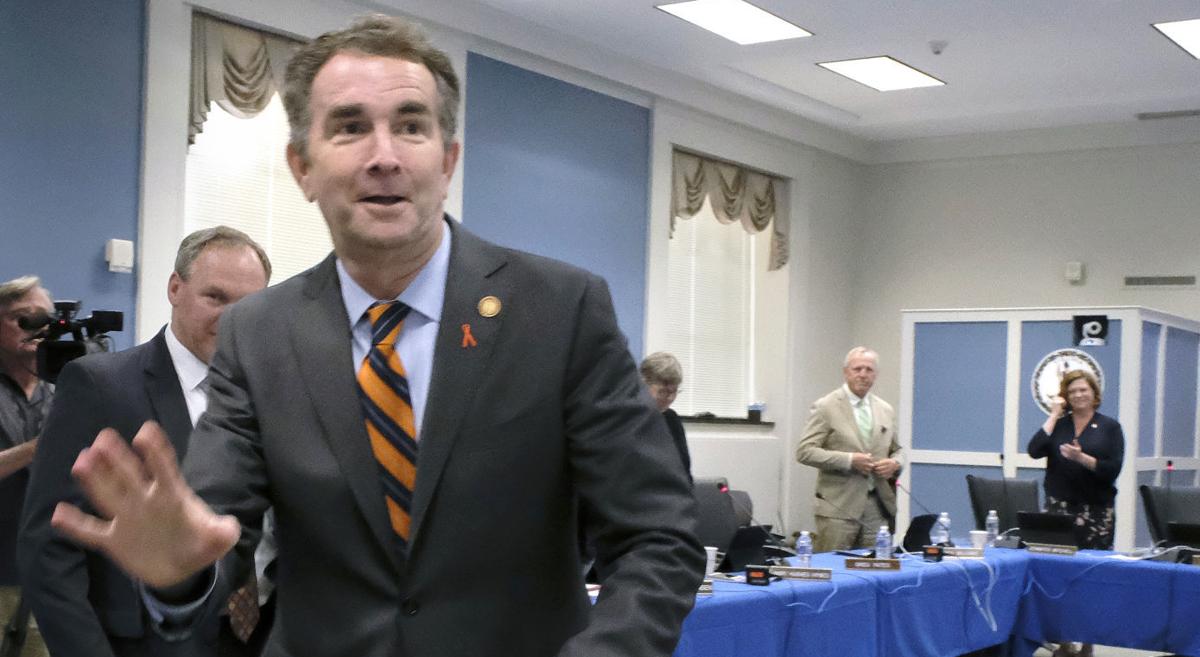 Governor Ralph Northam leaves after adressing a meeting of the Commonwealth Transportation Board in Richmond on Tuesday. 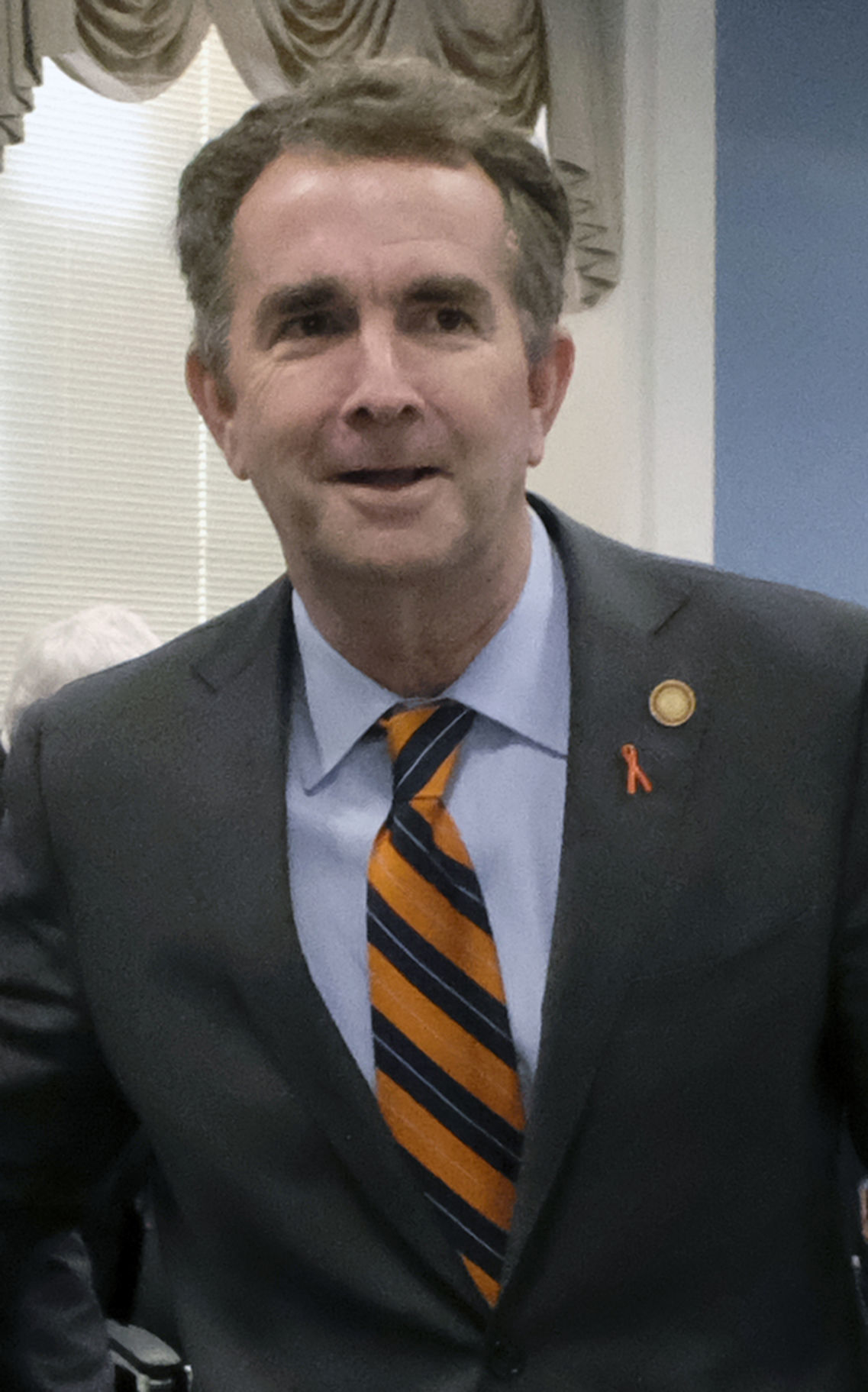 Gov. Ralph Northam spoke to the state’s transportation board on Tuesday.

Governor Ralph Northam leaves after adressing a meeting of the Commonwealth Transportation Board in Richmond on Tuesday.

Gov. Ralph Northam spoke to the state’s transportation board on Tuesday.

A half-day after the University of Virginia won the men’s college basketball national championship, Gov. Ralph Northam took a victory lap of his own for finding a solution to a problem that had defeated the General Assembly — how to pay for more than $2 billion in crucial improvements to Interstate 81.

Northam, wearing a blue-and-orange UVA tie, told the Commonwealth Transportation Board on Tuesday that he decided shortly after the assembly adjourned on Feb. 24 to use his gubernatorial power to propose a package of fuel taxes and truck fees that the assembly adopted at its veto session on April 3.

“When the legislature went home and I-81 was left on the table, I just said, ‘This isn’t acceptable, we need to do something,’” the governor said, recalling a private meeting with Secretary of Transportation Shannon Valentine.

Northam was operating with diminished political capital after a scandal erupted midway through the session over a racist photo on his 1984 medical school yearbook page. He credits the relationships he had forged with legislators in 12 years as a state senator and lieutenant governor for finding a path to compromise on funding I-81 improvements.

“It’s a big win for Virginia,” he said after the transportation board meeting. “I’m governor. I was elected to be a leader.”

The Democrat also credited one of his predecessors as governor, Republican Bob McDonnell, for reaching a bipartisan compromise with legislative leaders in 2013, when the assembly adopted a $6 billion package of state and regional taxes that is transforming Virginia’s transportation system, especially in Hampton Roads and Northern Virginia.

“Good things are happening in Virginia because of the revenue resources we have,” Northam told the board. Referring to McDonnell, he said: “It was all possible because of a governor who had the vision and leaders from both sides of the aisle.”

Like the 2013 transportation deal, the legislature took a tough vote last week on raising taxes in an election year to pay for transportation improvements that the governor said voters want.

“Nobody likes taxes, nobody likes tolls, but the money does not fall from the sky to build these projects,” Northam told the state board. “If Virginians see progress and see us spending their tax dollars in a responsible way, they’re supportive of it.”

Virginia transportation officials say they are making plans to begin moving quickly after the law takes effect on July 1 to design and advertise the initial projects planned for improving safety on 1-81, a heavily traveled truck route that extends 325 miles from the northern Shenandoah Valley to Bristol in Southwest Virginia.

“Hopefully, we’ll have shovels to the ground this time next year,” Commissioner of Transportation Stephen Brich said.

The transportation package that the legislature adopted and Northam signed the same day ultimately will generate more than $280 million annually, with half going to projects in the I-81 corridor plan that the board adopted in December.

The rest of the new revenues will pay for improvements to other interstate highways, based on how much truck travel they carry. That includes the Interstate 95 corridor, already undergoing major highway and rail improvements north of Fredericksburg, and Interstate 64, which ultimately would receive about $28 million a year that could be used to widen the highway east of Richmond.

The package also includes more than $20 million a year for the Northern Virginia Transportation Authority to partly compensate for the loss of regional funds to pay for Virginia’s $154 million annual contribution to rebuilding the Washington Metro transit system.

Most of the new revenues will come from increased registration fees for trucks, based on their weight and wear on roadways, as well as higher taxes on diesel fuel, at the pump and through a North American compact that reimburses states for interstate truck travel.

The road tax will increase by 10 cents per gallon in two phases — one on July 1 and another a year later. In mid-2021, the tax on diesel fuel at the pump will rise by 6.8 cents per gallon.

I-81 handles 41 percent of interstate truck travel in Virginia, so it will receive the biggest share of the revenue from higher truck fees and diesel taxes.

The new I-81 corridor fund also will receive about $60 million a year from a 2.1 percent regional fuel tax that will be levied in 36 jurisdictions within five regional planning districts in the corridor, similar to the regional taxes approved in 2013 for Hampton Roads and Northern Virginia.

The transportation package does not allow the new state revenues to pay for bonds to pay for an I-81 plan that ultimately will cost about $2.2 billion. The state does not have adequate debt capacity for the project, especially after the assembly approved Northam’s revised plan to authorize $315 million in bonds to replace Central State Hospital near Petersburg.

However, the regional taxes could be used to raise about $550 million in bonds for projects along the I-81 corridor, although the assembly will have to authorize their use.

The funding package also could help proposed transportation projects across Virginia by freeing up money in the state’s SmartScale program adopted in 2014 for allocating money for road and rail improvements.

If the new funding had been available in the first three rounds of SmartScale awards, an additional $933 million would have been available to fund other projects, said Deputy Secretary of Transportation Nick Donohue, but he cautioned that the state does not plan to go back and replace the money used for already approved projects.

“I would consider this essentially forward-looking,” Donohue said.

Members of the board expressed gratitude to Northam, Valentine and Donohue for finding a way to fund the improvements to I-81 now, rather than waiting until the General Assembly convenes again in January.

“It’s not clear that waiting another year to study this was going to advance the ball,” said Salem District representative Raymond Smoot, who lives in Montgomery County.

Valentine credited Northam’s message in their private conversation after the assembly adjourned in February for enabling the compromise that passed last week.

“With that encouragement and permission, we worked really hard to get where we are today,” she said.

Much or most of the fuel to be taxed is fuel which will not be used on I 81.

The arbitrary selection of 5 planning districts to be taxed, benefiting the entire state, including areas not within those districts, if not unconstitutional, should be. Because they are along an interstate which their use of does not amount to 1%? Some of the counties do not adjoin I 81, another reason this arbitrary, unequal taxation voted on by representatives of the entire state to which the voters of these areas have no recourse.
Promoting increased use is to increase contribution of carbon into the atmosphere and the continuation of death and mayhem at 79 mph.

Republicans have already been forced to the middle.

Electric vehicles pay a higher registration fee in VA, something like $65 per year.

The average driver of a gasoline-burning car uses about 500 gallons of gas per year, taxed (federal and state) at about 40 cents/gallon, or $200, plus $45.75 yearly for registration. Looks like electrics get a significant break.

A cheap shot and the lowest form of robbery. The Governor is clearly accomplished at spending others peoples' money. It is even easier to use the votes of all to take from a few. Taking from only rural western Va., and only diesel users is a cinch vote for the rest of the state. On top of an easy theft is the Governors continued disregard for for human life and enormous property damage. Safety is a difficult effort so 1000 or so deaths a year is okay, as long as Va. is for most lovers. Along with a dash of global warming. It is difficult to enforce speed laws so he only takes money from the biggest, dollar value offenders. Congratulations Gov., you are an accomplished politician.

There may be some reasoning in here, but the writing is so confused that finding it seems not worth the effort.

Excuse my minimal education or writing ability, but rest assured I can recognise a con when I see it. Our wanton destruction and need for speed, promoted by our legislators, is beyond reason.

Iy’s Called government, Howard. Citizens pooling their resources for the common good. You may have been educated in VA, in which case your lack of civics knowledge is understandable since all VA civics education on the 50’s - 70’s was spent white washing the atrocities of the southern slave keepers.

Virginia roads are badly in need of repair. But, to base the bulk of the revenue on a fuel tax is absurd. Electric vehicles are subsidized with tax credits, yet they share our roads and pay no fuel tax. There must be some form of sharing the cost of road maintenance and construction across all types of vehicles, both gas and electric.

Bill, you make a good point; electric car owners need to pay their share. However, it's trucks that create the major problem(s) on I81, and as yet we have no electric 18-wheelers.

Electric vehicles pay an extra $64 fee, which is the same amount as the fuel tax that a car that gets 30 mpg would pay over 12,000 miles.

Electric vehicles pay an extra $64 fee, which is the same amount as the fuel tax that a car that gets 30 mpg would pay over 12,000 miles.