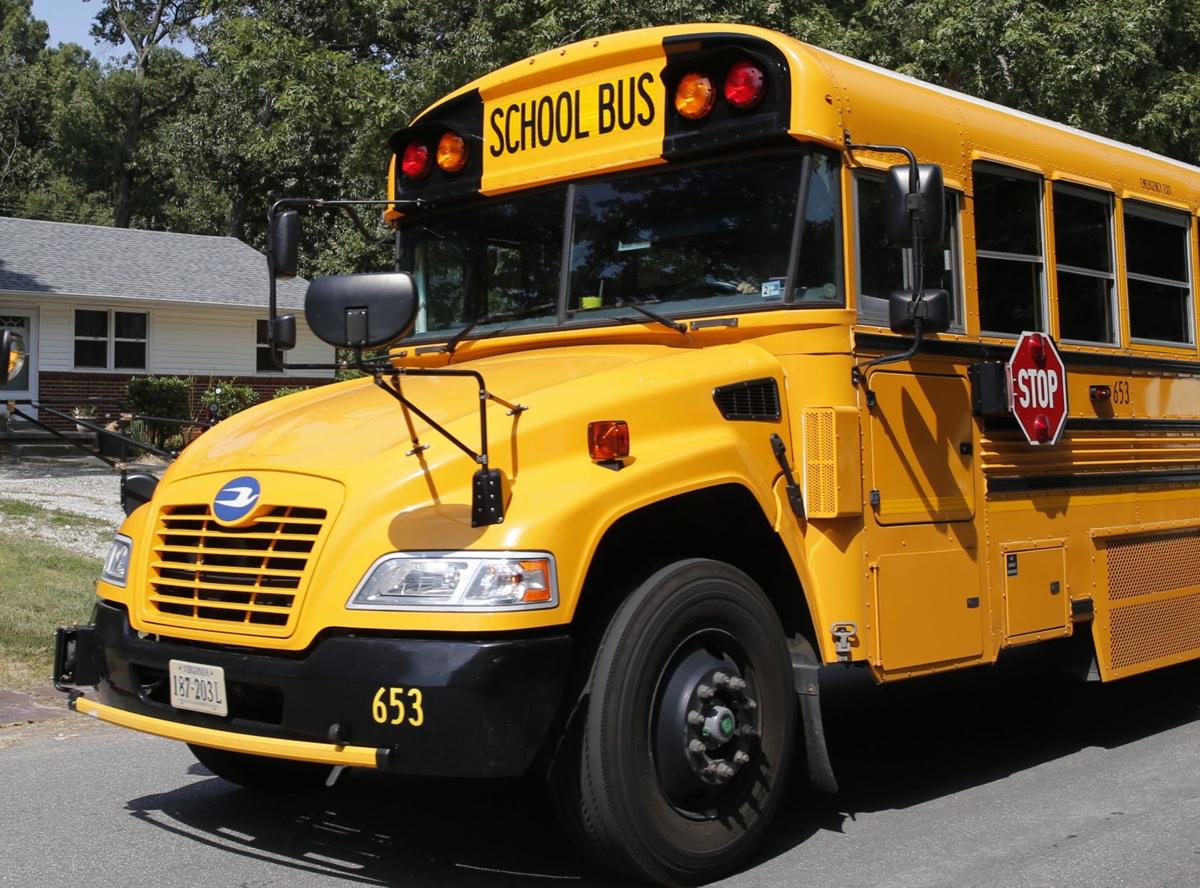 A school bus arrives at Bellwood Elementary School in Chesterfield County on July 31, 2019. 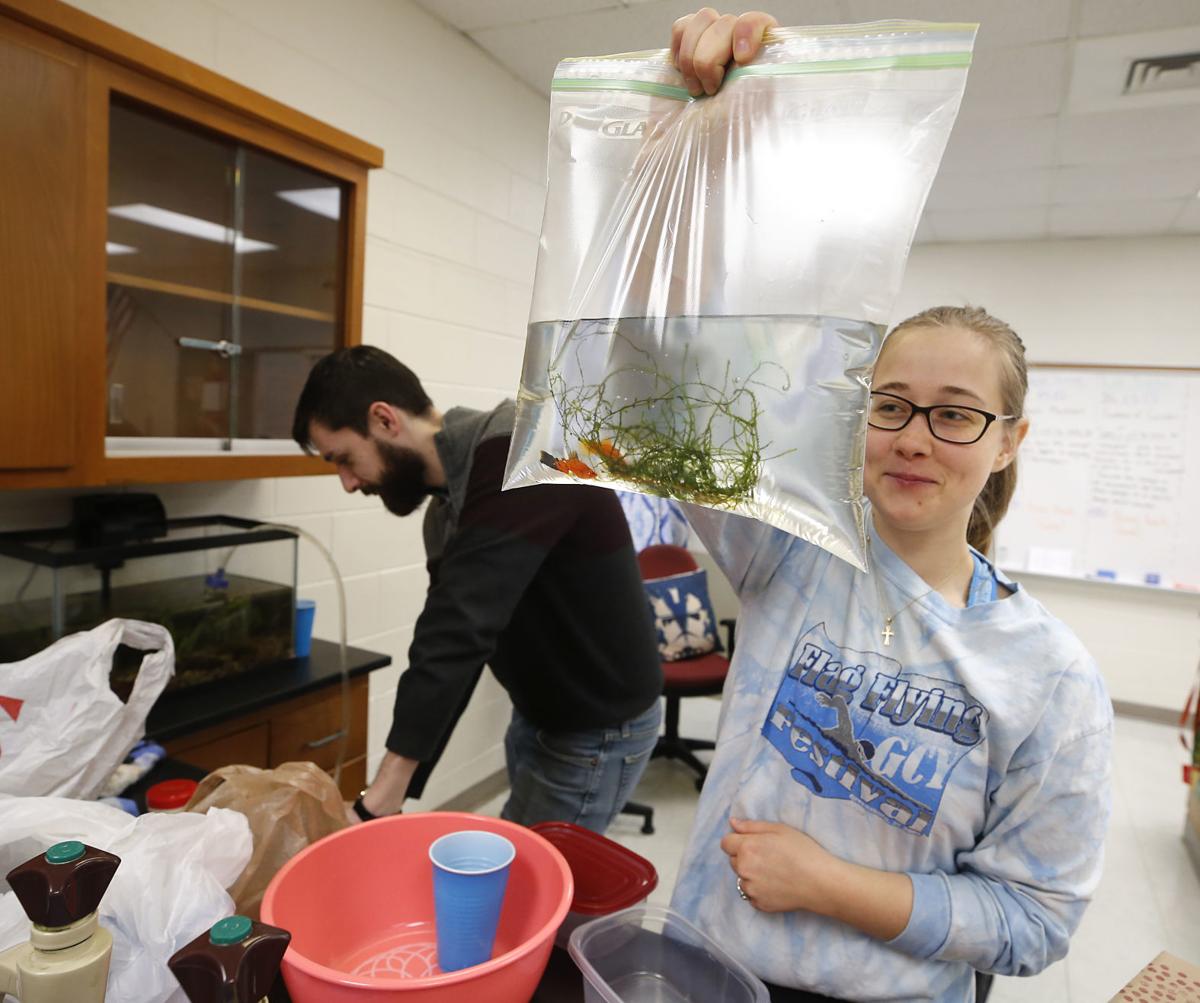 Charles City High School science teacher Maggie Hollingsworth returned to her classroom on Monday with her fiance, Brian Will, to bring home fish. Will drained the tank as Hollingsworth held up a bag with bamboo shrimp and platies.

A school bus arrives at Bellwood Elementary School in Chesterfield County on July 31, 2019.

Charles City High School science teacher Maggie Hollingsworth returned to her classroom on Monday with her fiance, Brian Will, to bring home fish. Will drained the tank as Hollingsworth held up a bag with bamboo shrimp and platies.

Virginia schools will stay closed for the rest of the academic year, Gov. Ralph Northam ordered Monday, a step only one other state has taken in hopes of mitigating the spread of the coronavirus.

Northam’s announcement came four days before his first round of mandated school closures was set to expire, on March 27. His decision, which applies to all K-12 public and private schools, is the latest step in Virginia’s escalating response to a virus that’s already killed seven people in the state.

“School closures are necessary to minimize the speed at which COVID-19 spreads and protect the capacity of our health care system,” Northam said, adding: “We are essentially fighting a biological war right now in this country.”

Kansas is the only other state to have shuttered physical school buildings for the rest of the school year. Most states have opted for a more gradual approach, according to Education Week. North Carolina, for example, announced Monday that its schools would stay closed until at least May 15.

All but four states — Idaho, Nebraska, Iowa and Maine — have mandated some degree of school closure.

Virginia’s closures are likely to lead to massive upheaval in the lives of families, students and educators, with sports canceled, meals uncertain and routines suspended as roughly 1.5 million students and 100,000 teachers move forward unsure when they’ll be together inside a school building again.

That community universally mourned Northam’s order and the lost three remaining months of the school year, which spoils staples such as graduation and prom, but accepted the decision.

“As disruptive as this will be for students, families and staff, I believe it’s the right decision given the health care crisis we’re facing,” said Richmond Public Schools Superintendent Jason Kamras.

All four Richmond-area school districts already had extended school closures through mid-April and are acclimating to the tumult.

Robert Dunham, a teacher at Richmond’s Overby-Sheppard Elementary School, said it’s hard to watch the progress that his students have made be “washed away.”

“The connection I have with my students is like no other and not being able to see their smiles, listen to their stories, eat lunch with them, and see them grow academically is what I’ll miss the most about in-person school,” he said. “As a parent I understand because we need to do everything possible to keep our children safe and healthy, but as an educator I have mixed emotions.”

The city school system has pushed virtual learning and is using buses to bring grab-and-go meals to 34 spots across Richmond, along with 10 distribution sites at schools.

No Kid Hungry Virginia, the state affiliate of a national organization aimed at ending childhood hunger, is launching a service it normally offers in the summer. Families can text “FOOD” or “COMIDA” to 877-877 to find free food distribution sites organized by school districts and other community organizations.

Henrico County Public Schools Superintendent Amy Cashwell said she was “stunned and saddened” by the decision, but agrees it’s necessary.

In a message to families and staff, Hanover County Public Schools Superintendent Michael Gill asked for “continued patience, kindness, and understanding as we navigate this new territory together.”

Merv Daugherty, the schools chief in Chesterfield County, called it a necessary decision and a historic day.

“Unfortunately, it is not the history that you or I probably care to be a part of,” he wrote in a message to families and staff. “We join you, our students and school divisions across Virginia in the disbelief that our schools are closed to traditional learning opportunities.”

Virginia Education Association President Jim Livingston said the teachers union supports the decision but remains concerned about the well-being of teachers and their students.

“Even if you saw this coming — some of us did, some did not — it still feels like a gut punch and it, in many ways, takes your breath away,” Livingston said on a Facebook Live video reacting to the news Monday afternoon.

The news sent shock waves through the teaching community as educators came to terms with the fact that the school year has been cut short.

Mark Seidenberg, an Advanced Placement psychology and girls tennis coach at Mills Godwin High in Henrico, had already filed his papers to retire at the end of the school year. Monday’s announcement meant his career of entering a high school classroom each morning is effectively over.

“I’ll never be in front of one of my classes again,” Seidenberg said. “I’m incredibly disappointed that I’m not going to get back and teach the rest of the year knowing it’s my last. But I understand, safety first.”

The season never really got started for the Godwin girls tennis team. The Eagles had practiced some but hadn’t played their first match, and Seidenberg believed they had a good shot at the Class 5 state championship.

“We hardly got to know our team,” he said.

Seidenberg missed most of the first semester after suffering an aortic dissection in the fall. He returned at the end of January, but school closed just six weeks later.

If school had remained in session, Seidenberg would have spent much of his time preparing students for the AP test. Students can still take the AP psychology test, he said, but it’s an abbreviated version taken from home.

International Baccalaureate, another credit-bearing program, canceled its May examinations, the Geneva-based foundation announced Monday. Students can still receive IB diplomas or course certificates based on a student’s “coursework and the established assessment expertise, rigor and quality control” already built into the programs, according to a news release.

The Virginia Department of Education is expected to issue guidance Tuesday on graduation requirements and virtual learning, among other things.

Tori Pierson, who teaches English as a second language at Elkhardt-Thompson Middle School in Richmond’s South Side, was on Instagram Live with some of her students when she got the news, which she then broke to them.

“They are devastated to not be returning to see their friends and teachers,” Pierson said Monday, adding that the students are already asking if they’ll be given laptops or other technology, whether they’ll have to repeat a grade or how they will be ready for next year. “I know a million questions are flying around right now and we’re all just searching for some certainty.”

She added: “What’s heartbreaking is that my students are so upset about missing school. That shows me how valuable that community is to them and reminds me how meaningful our work is as educators.”

Pierson didn’t get a chance to say goodbye to her classes. For now she hopes her teacher account on Instagram, on which she receives messages just about every day from students who want someone to talk to, and a class conducted over video will keep them connected.

Gov. Ralph Northam on Monday ordered all schools closed for the rest of the academic year, along with additional closings and restrictions for…

And the teachers are getting full pay. While the rest of us are not earning ..... they better not ask for any raises especially Chesterfield because they all are getting paid full pay and then will get a check from the government. They are double dipping

How are democrats who are in total charge of the VA state government going to responsibly resolve this issue?

I doesn't matter John … anything that works will be to their credit, anything that doesn't will be Trump's fault …. Things are a lot simpler when the simpleminded are in charge. Period.