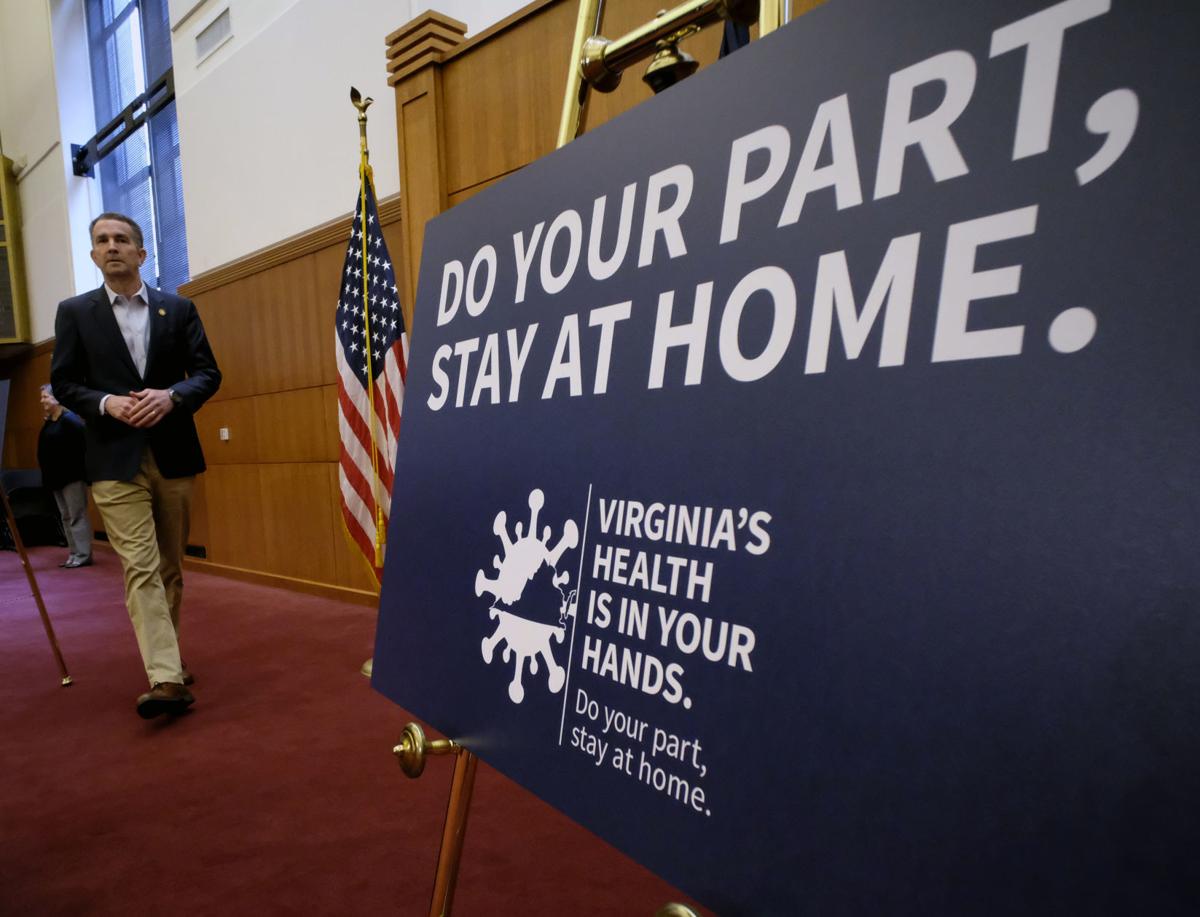 Gov. Ralph Northam headed to the podium for his briefing inside the Patrick Henry Building in Richmond on Monday. 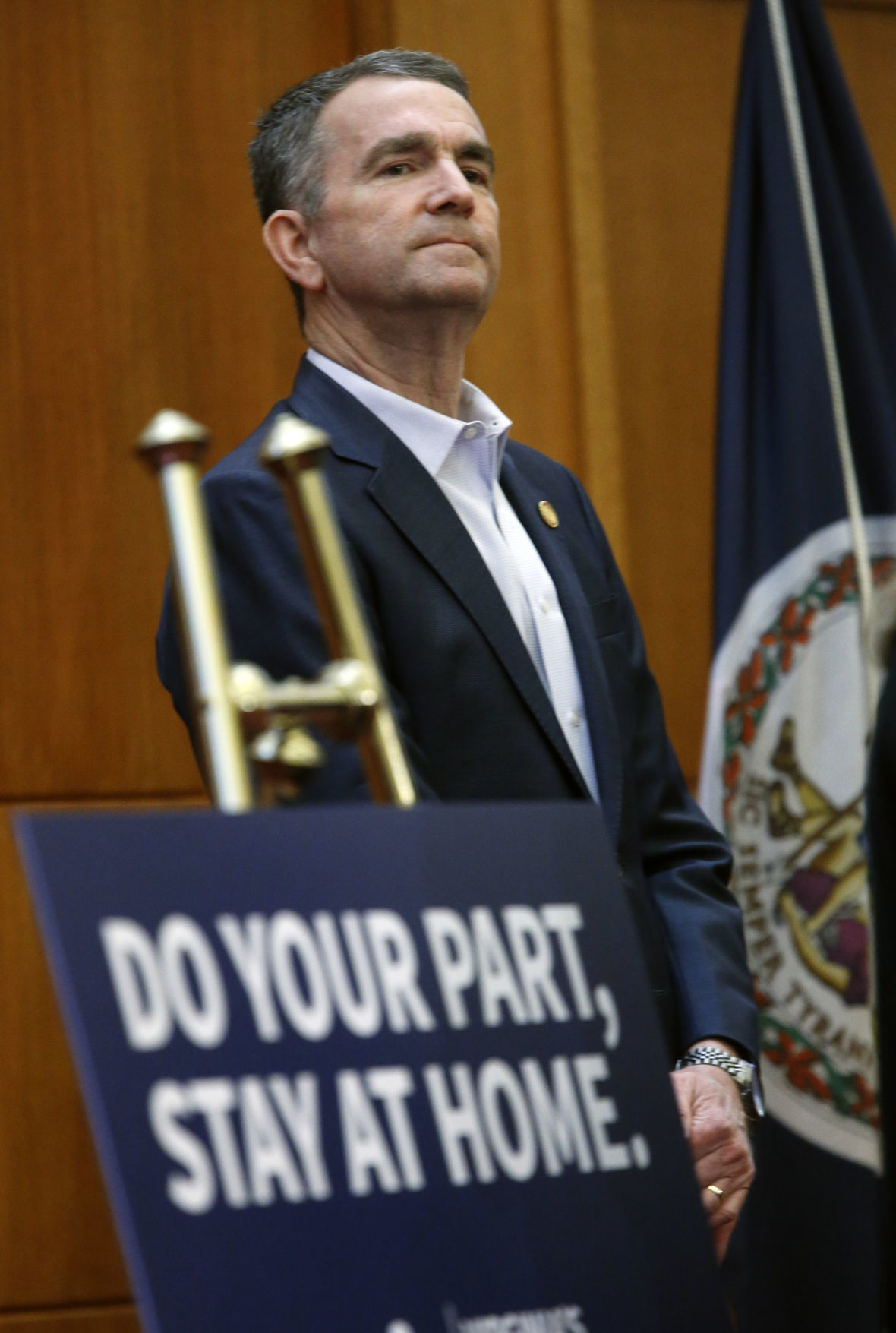 Virginia Governor Ralph Northam listens to a question during his daily press briefing inside the Patrick Henry Building in Richmond, VA, Monday, April 6, 2020. He urged everyone to wear a mask when out in public to help prevent VOVID-19 from spreading.

Gov. Ralph Northam headed to the podium for his briefing inside the Patrick Henry Building in Richmond on Monday.

Virginia Governor Ralph Northam listens to a question during his daily press briefing inside the Patrick Henry Building in Richmond, VA, Monday, April 6, 2020. He urged everyone to wear a mask when out in public to help prevent VOVID-19 from spreading.

Larry Hughes filed the suit Monday in Russell County Circuit Court and is looking for an injunction that would allow churches and other faith communities to hold limitless group assemblies. Northam has barred groups of 10 or more from meeting in an effort to mitigate the spread of the coronavirus, which has killed 75 people in the commonwealth, according to the state Health Department.

In the suit, Hughes, a retired coal miner and teacher, says that Northam’s executive orders have a “chilling effect” on his right to religious freedom.

“[Hughes] will not know the number of participants that may be at a service until he arrives,” the lawsuit reads. “Even the pastor of a church may fear numerical non-compliance and simply close the doors to avoid turning out participants during service if the number suddenly exceeds the permissible limit.”

Reached by phone Wednesday, Hughes deferred questions to his lawyer, T. Shead Cook. Hughes’ attorney said that “the constitution is not a prescription for convenience,” and Cook added that upcoming religious holidays can be observed with proper social distancing.

Hughes, a Christian, is asking the court, specifically Russell County Judge Michael Moore, to issue an injunction overturning the order this week. Passover began Wednesday night and Easter is Sunday.

“As a person of faith, the Governor recognized that the temporary gatherings restriction would be particularly hard on religious communities. … The Governor has issued guidance designed to help faith communities maintain their communion and worked with religious leaders to find creative solutions, including online and drive-in services,” the brief reads.

Herring added: “Time and again, large gatherings have provided fertile ground for transmission of this deadly virus — and in-person religious services have not been spared.”

A spokeswoman for Northam did not return a request for comment.

The executive orders at issue — Executive Order 53 and Executive Order 55 — prohibit public and private gatherings of 10 or more people, specifically mentioning religious events both inside and outside. The suit says it’s unfair to effectively shut down religious gatherings but allow other businesses that have been deemed essential — Hughes highlighted beer, wine and liquor stores specifically — to stay open.

In response to Herring’s defense, Cook said in a brief filed Wednesday that the orders place “commercial/secular interests above the guaranteed freedom of religion.”

“The limitation of no more than 10 persons at a religious service when there are so many exceptions, is evidence that this is not a religiously neutral rule of general application but substantially burdens specific biblical guidance,” the brief reads.

Russell County has one confirmed COVID-19 case, according to the Virginia Department of Health.

Herring spokeswoman Charlotte Gomer said a hearing on the case is scheduled to be held via phone on Thursday.

Lordy, protect us from these religious zealots. as they could infect all of us. If they disobey a state order to protect the rest of the state, then let Tenn. or West Va, have them. for a price of course.

"In February, family members gathered for a Chicago-area funeral. A family friend who had been out of state attended and was just a bit sick with mild respiratory symptoms.

Before long, 16 people between the ages of 5 and 86 had been infected (seven confirmed and nine probable), and three had died.

The case study, published Wednesday by the Centers for Disease Control and Prevention, is one of the most detailed looks at how covid-19 moves through communities and shows how a single person can set off a chain reaction of infections. The transmissions — traced to a funeral and birthday party held three days apart — took place before major social-distancing policies were implemented and may have facilitated transmission of covid-19 to the broader Chicago community."

This is a painful waste of time and resources that need to be focused on the pandemic. Hopefully, this case won't make it to court and it will be thrown out. Just ridiculous. I don't feel my religious rights have been hampered in the least. But I wonder if this person has seen the news? How can anyone be so ignorant when there have been almost 15,000 deaths in USA and almost 88,000 world wide. AND he is worried about going to church?? Really???

If you can't worship your god while home alone, there is either something lacking in your god, or in your faith.

The saying of Jesus that was found in Nag Hamadi in 1945:

"The Kingdom of God is inside you and all around you

Not in a mansion of wood and stone

Split a piece of wood and I am there

Lift a stone and you will find me."

This is not a permanent situation nor is it evidence of religious persecution which it seems a lot of Xtians like to wail on about these days as if it exists. You are not "suffering", you are not being harassed and you are not being punished for your beliefs. To potentially expose yourself, and therefore others, needlessly to a disease that has resulted in the death of some number is not some gIorious sign of your faith -- it is stupidity. 10 is a reasonable number.

And, by the way, it's not just the Lenten season. It is also Passover.

In Judaism it takes 10 men to make a minyan and a minyan is necessary for such things as public readings of the Torah and saying the khaddish.

“As a person of faith, “ Right

And how would you know differently? Of course, your hero Trump has shown his faith by his actions every day. NOT.

What sort of death cult does Larry Hughes belong to that they want to go to court to enable the transmission of the Corona virus?

Don’t they realize they are not just making a decision to be more risky for themselves?

After they spread the contagion among themselves at church they stop at the Kroger or the Food Lion and spread it around there. Or they take it into the Home Depot when they stop for their Easter flowers or go searching for toilet paper at Costco.

Check your bible, christians. It does NOT say

“And He said to them, “Go into all the world and spread the coronavirus to every creature.

Looking in the mirror, are you?

I don't find what Drake said as being idiotic at all. I find that guy who says he's suing to be more like an idiot.

Steve P obsesses over me. Creepy.

I think the suit is premature. Give this a few more weeks.

The vast majority of churches, synagogues, mosques, whatever, are already doing services online. Which, of course, is the faith-based thing to do, instead of deliberately risking their parishioners' health or lives.

A lawsuit isn't necessary now or in the future.

"The likelihood that these evangelical churches can become major disease vectors for COVID-19 is based in immediate reality: One such church in Sacramento County, California—the Bethany Slavic Missionary Church near Rancho Cordova—is the source of 71 confirmed cases of novel coronavirus, and one death so far. Overall, more than a third of that county’s 314 cases are connected to church services."

One might say that holding services with large groups of people at a time like this is "testing God". I don't think faith is supposed to work like that.