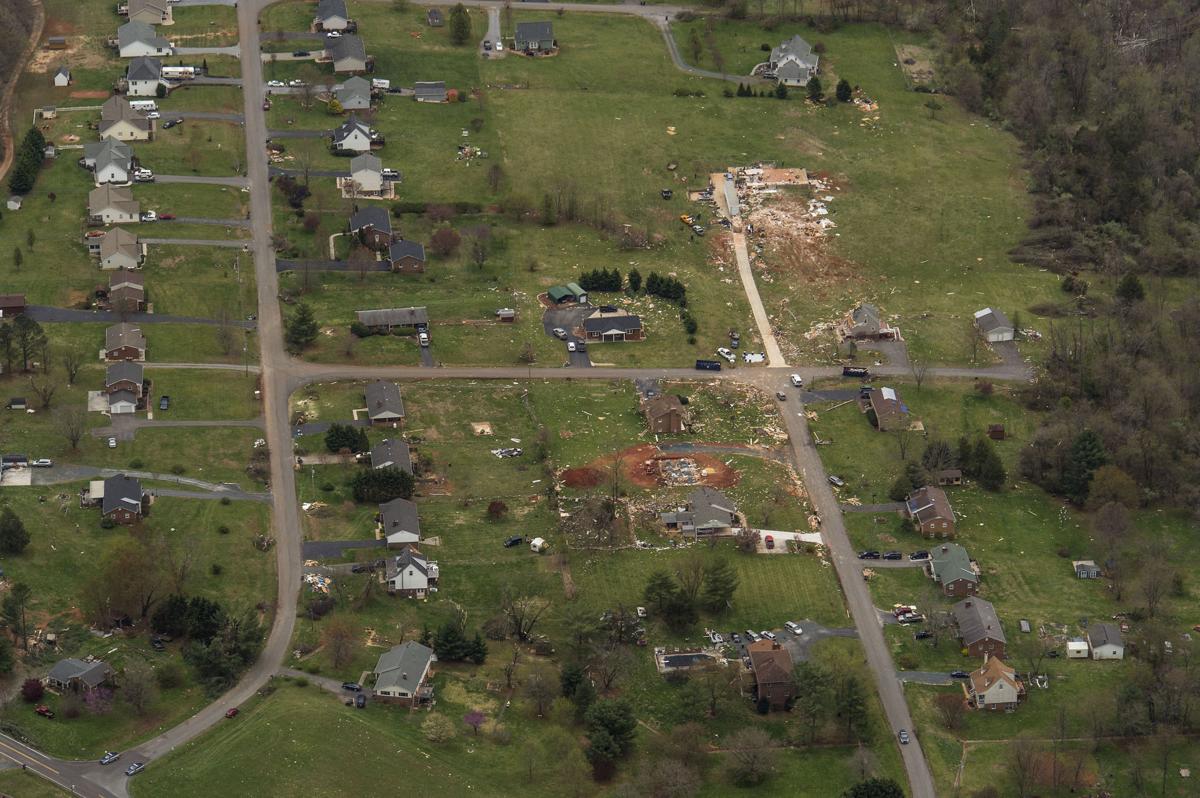 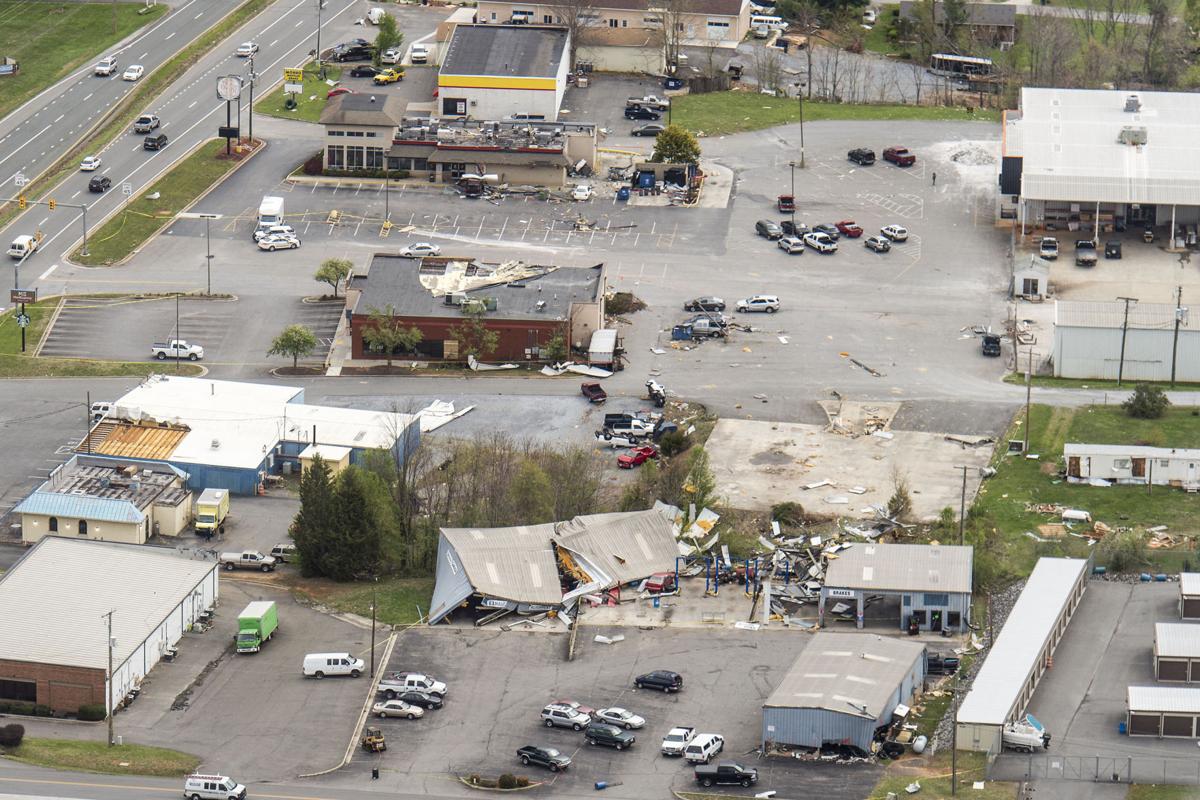 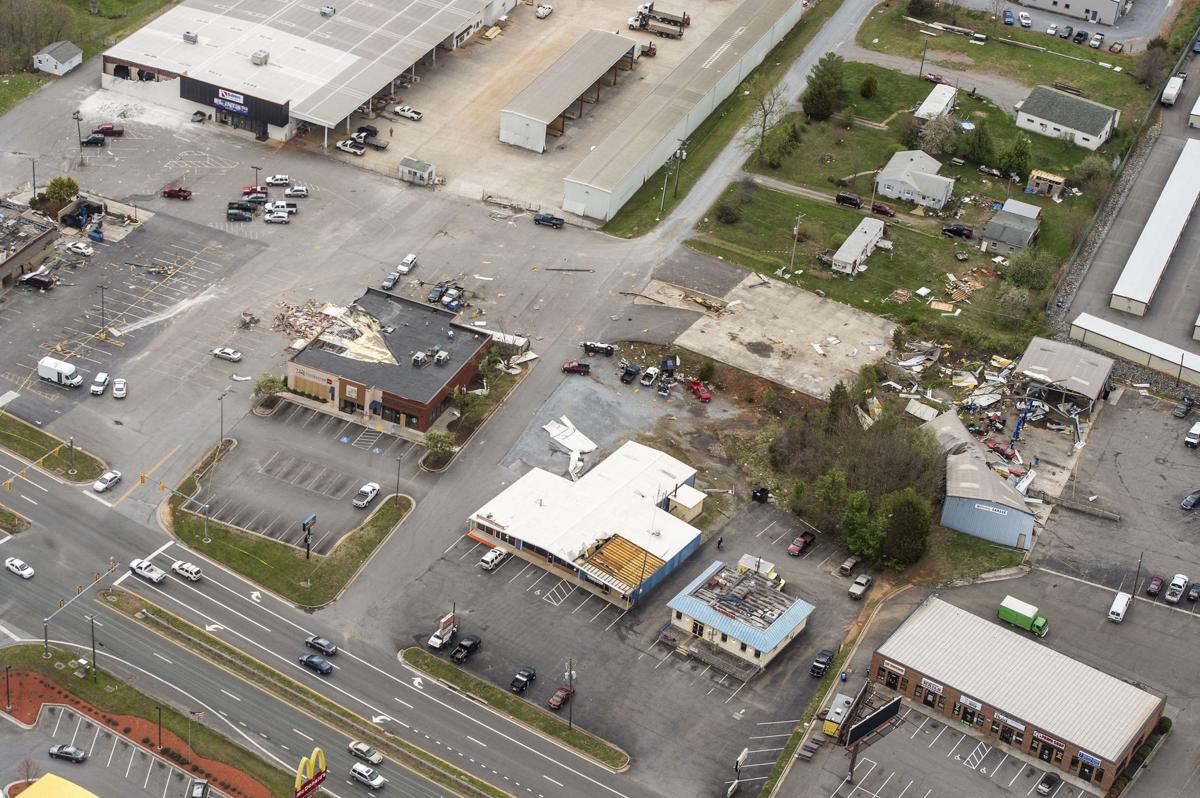 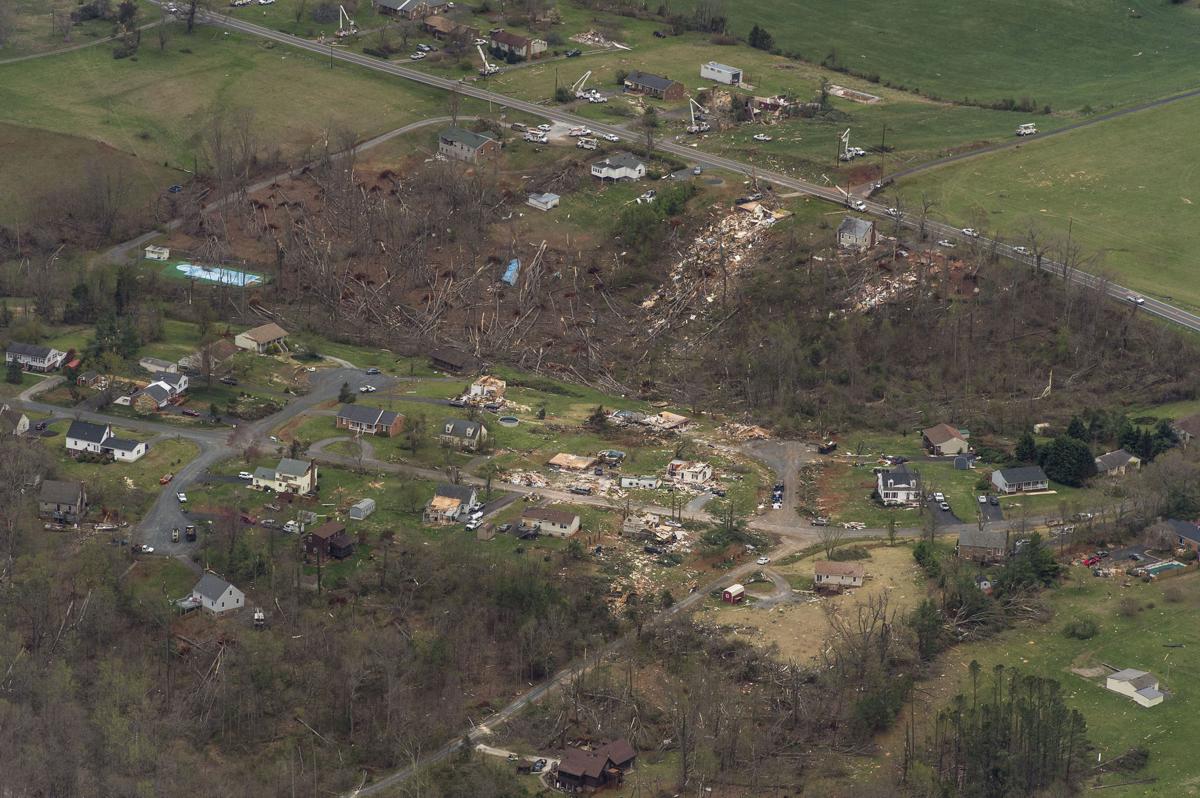 UPDATE, 12:04 p.m. Wednesday: The tornado that struck parts of the Lynchburg region Sunday was upgraded Wednesday to an EF3 where it hit the Elon community of Amherst County, up from the previous rating of EF2.

Steve Keighton, science and operations officer at the National Weather Service in Blacksburg who has been assessing the tornado that struck Lynchburg and Campbell and Amherst counties, said NWS officials and other experts reevaluated the damage and decided to upgrade the status a few hours ago.

The EF3 status only applies to the Elon area along Virginia 130 in the Nottaway and Deerfield drives.

The previous rating was a high EF2, but this rating is for a mid-ranged EF3, Keighton said.

The tornado that struck Appomattox County in 2016 also was an EF3.

As of noon on Wednesday, Keighton said the Amherst County Sheriff’s Office was assessing the northern part of the county to help determine whether the tornado continued in that direction.

That information will be sent back to NWS so they can make another assessment.

Earlier: Mere hours before residents of Lynchburg and Campbell and Amherst counties sought shelter in their homes and basements Sunday evening, a storm system in Greensboro, North Carolina, was making its way north.

National Weather Service meteorologists said the tornado that hit the Lynchburg area had its beginnings in a clash of warm and cool air masses above Greensboro on Sunday afternoon.

The days leading up to the storm had been warm, but a cold front arriving from the northwest Sunday created instability in the atmosphere, making for the perfect environment for a tornado.

“We knew it was developing several days ahead of time,” said Steve Keighton, science and operations officer at the National Weather Service in Blacksburg. “We knew it was possible.”

Late Monday, the National Weather Service confirmed what the tell-tale signs of twisted trees and smashed houses already had indicated to Lynchburg-area residents in the storm’s path. The NWS said a tornado, likely packing wind speeds up to 135 mph, wrought a 20-mile trail of destruction through Campbell County, Lynchburg and Amherst County.

The NWS said its preliminary finding is an EF2 on what’s known as the "Enhanced Fujita" scale, which ranges from 0 to 5 in measuring a tornado's strength. EF2 is considered a "strong" tornado, with maximum wind speeds of 111 to 135 mph.

“It was almost an EF3,” Keighton said. “In our coverage area, there were only two EF3 tornadoes since 1950. One was in Appomattox two years ago, and one was in North Carolina in 1998. An EF3 intensity is quite rare. This one was almost that.”

After he goes through his research, he said the rating possibly could get bumped up to an EF3, which has winds of 136 to 165 mph.

Based on historic data, the Lynchburg area only sees a tornado of that significance every 10 to 15 years, maybe even once every 20 years, Keighton said.

“I say that, but we just had one in Appomattox two years ago. It’s nice to say it’s fairly rare, but they can come anytime,” he said. “You might get another one in two weeks, or you might not get another one in 20 years. That’s just the nature of it.”

Sunday's tornado had an estimated maximum wind speed of 130 mph, a path length of 20.4 miles and a maximum path width of 600 yards, according to a preliminary report released Monday night by Keighton.

On Sunday, NWS Blacksburg’s coverage area had two tornadoes, including one from Campbell County to Amherst County and one in Rockingham County, North Carolina.  A third is likely to be confirmed by the end of the day Tuesday in the Danville and Pittsylvania County area.

There is the possibility of a fourth tornado further north in Amherst, but Keighton said this could just be an extension of the tornado that hit Elon.

He said he would not be able to confirm those additional storms until Wednesday.

Like a tree, a tornado has a main trunk that creates the heaviest destruction — as it did in Elon  — but a tornado can have extensions that branch out to other areas that may have taken trees down but not structures.

Once the tornado touched down in the Timberlake area and moved roughly to the northwest, its extensions wrapped around to the Lakeside, Boonsboro and Rivermont areas and caused dozens of trees to fall on homes and cars before the trunk of the twister crossed the James River near Peakland and entered Amherst County.

Keighton, along with NWS meteorologist Nick Fillo, toured the tornado’s path Monday. Their goal was to determine how long it was on the ground, its width and how fast the winds were moving.

“From what we could tell — we didn’t see every point along the 20-mile path — we made assumptions it was a continuous path because there was enough damage, and it was wide enough,” Keighton said. “It’s hard to imagine it completely lifted up in spots. There are certainly areas with less damage and some with more. In Elon it intensified; south of that had intermittent damage as the tornado was still impacting the ground.”

The tornado widened to 600 yards in Boonsboro, creating EF1 damage. But in Elon, it widened to 400 yards and created severe EF2 damage.

According to Keighton’s report, large pine trees were snapped in two and left with no branches, a motor home in Elon was carried about 30 feet and tipped over and dozens of homes on Virginia 130 and Nottaway Drive and Deerfield Drive were damaged or destroyed.

It’s likely that for most of its life cycle, this tornado was wrapped in rain and very difficult to see coming. This also makes it far more dangerous, Keighton said.

“We have not heard from anyone who saw the funnel nor seen any videos yet of the actual funnel,” he said. “‘Rain wrapped’ is a term often used but not an official category of a tornado.”

Based on data from NWS reports, Keighton said Sunday’s tornado was the first recorded EF2 or stronger in Amherst County. There is no official NWS record since 1950 of a tornado hitting the Lynchburg city limits.

Mere hours before residents of Lynchburg and Campbell and Amherst counties sought shelter in their homes and basements Sunday evening, a storm system in Greensboro, North Carolina, was making its way north.

Timberlake Road in Campbell County was back to its typical busy state Tuesday morning. But like other areas in Lynchburg and in Amherst County, scars from Sunday’s tornado are abundant amid recovery efforts.

The National Weather Service has confirmed a tornado struck Lynchburg and the counties of Amherst and Campbell on Sunday.

A tornado with a maximum wind speed around 105 mph struck about four miles northwest of Moneta in Bedford County on April 15, the National Weather Service said in a preliminary report issued Thursday.