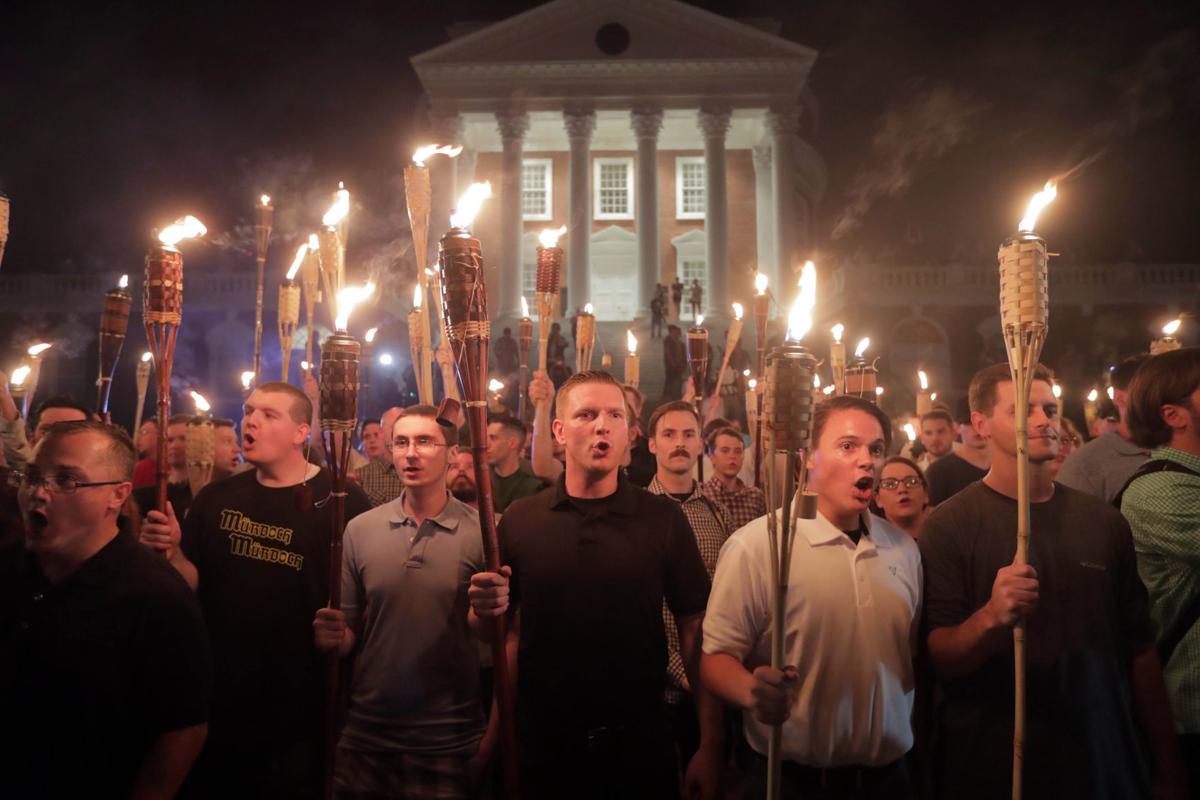 White supremacists led a torch march through the University of Virginia's campus on Aug. 11, 2017. 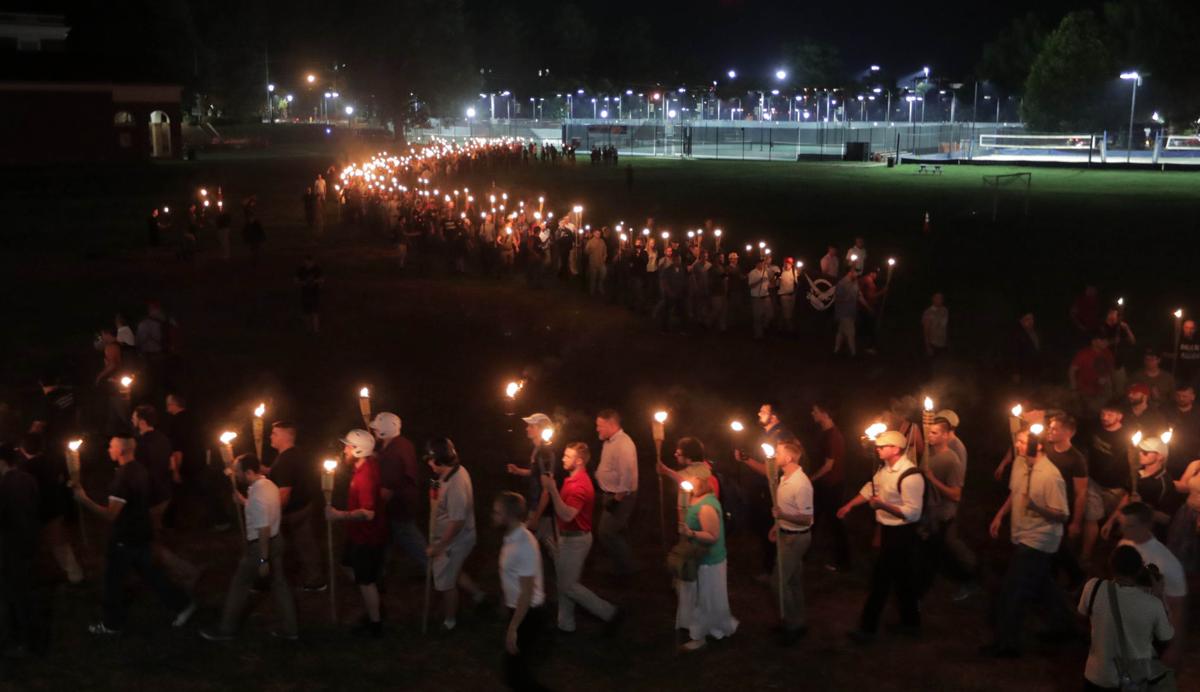 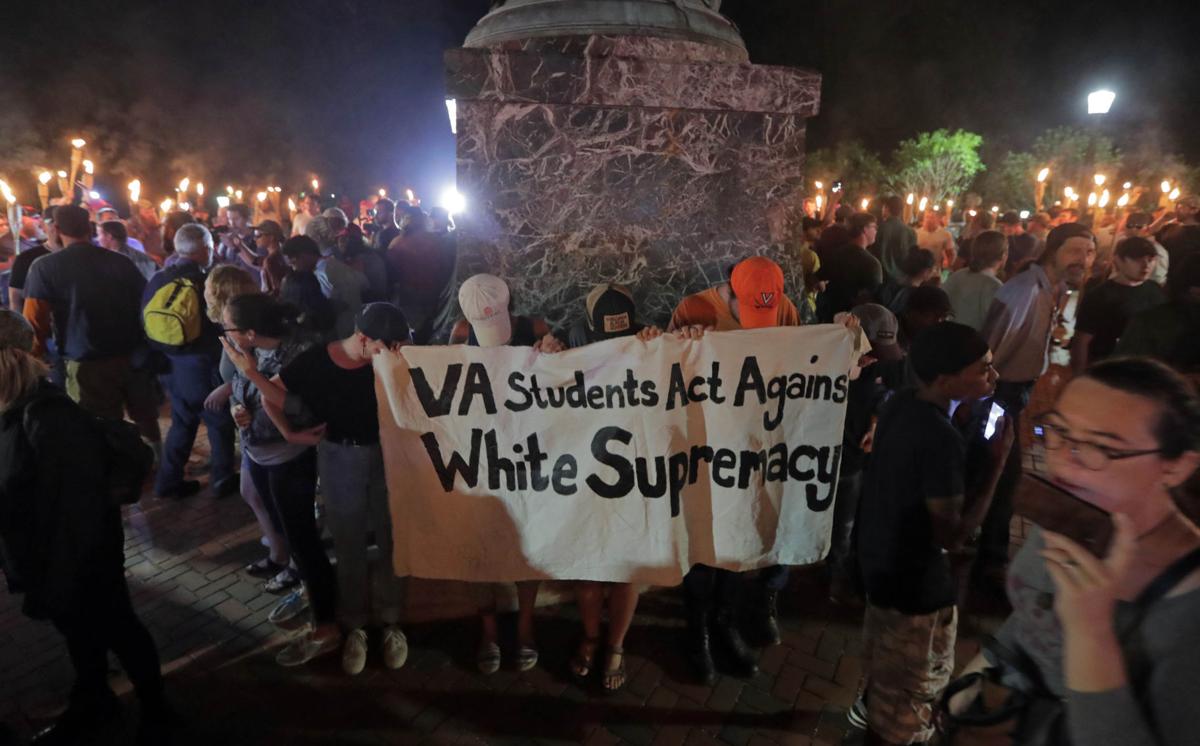 White supremacists led a torch march through the University of Virginia's campus on Aug. 11, 2017.

Echoing the May 13 rally at the foot of Charlottesville's Robert E. Lee statue, hundreds of torch-wielding white nationalists who are attending Saturday’s Unite the Right rally gathered at the University of Virginia and marched to the Rotunda, chanting, “You will not replace us.”

After the march, which began at UVa’s Nameless Field, reached the Rotunda, police later declared an unlawful assembly. Protesters and opponents alike reported being affected by pepper spray.

At the feet of a statue of Thomas Jefferson, fights began breaking out and some wielding tiki torches swung them at people. At least one person was arrested, and several people were treated at the scene for minor injuries.

The ralliers shouted many of the same chants at the May event, such as “blood and soil,” but this time, they declared that Charlottesville was their city now.

In a statement, UVa President Teresa A. Sullivan condemned the rally.

"...I am deeply saddened and disturbed by the hateful behavior displayed by torch-bearing protestors that marched on our Grounds this evening. I strongly condemn the unprovoked assault on members of our community, including University personnel who were attempting to maintain order," she said. "... The violence displayed on Grounds is intolerable and is entirely inconsistent with the University’s values."

Saturday’s Unite the Right rally — a gathering of white nationalists, neo-Nazis, members of the “alt-right” and other far right political groups — will be met by about 1,000 first responders, including law enforcement, according to city police Chief Al Thomas. The Virginia National Guard will be on standby, Gov. Terry McAuliffe said.

The 8 p.m. multi-faith service included dozens of local and national clergy members who are visiting the city this weekend.

City police estimated earlier as many as 2,000 to 6,000 people to be in attendance this weekend. Despite city efforts to move the rally to McIntire Park, the event still will be centered at Emancipation Park following a federal judge’s ruling.

The judge said  testimony indicated that Jason Kessler could successfully prove that the city revoked his original permit based on his ideas.

On Friday, City Manager Maurice Jones said at a news conference this will be the largest Virginia State Police deployment in the state in nearly three decades.

“These are trying and difficult times for our city and our nation,” Jones said. “We have deep political and ideological differences, and those differences will play out here in our community this weekend. It will be stressful and it will be tense, but I’m optimistic that cooler heads will prevail and we will ultimately be stronger as a community once this event is over.”

Earlier in the day, Gov. Terry McAuliffe announced he has been repeatedly briefed about the rally by various public safety officials and agencies, including the National Guard.

“Virginia State Police is leading the commonwealth’s planning and response for these events and will be on the scene in a support capacity before, during and after the planned rally,” McAuliffe said in the statement. “At my direction, personnel from the Virginia National Guard are also standing by to respond if needed.”

Thomas said he was informed the National Guard would monitor the situation.

“We expect this to be a significant challenge for not only our public safety personnel, but also our community,” he said. “There’s a lot of anxiety in this community. We feel that we have the resources available to protect our community.”

When asked about what lessons he and his department learned from the Loyal White Knights of the Ku Klux Klan rally on July 8, Thomas said the biggest mistake they could make is apply the same operational plan to Saturday’s rally.

“This event’s different,” he said. “The circumstances are different and we did learn a number of lessons that we will apply, but this is a completely different event that we are planning for.”

In addition, city officials stated the rights to expression and protest will be honored this weekend, but that there is “no constitutional right to incite or promote violence by anyone who will be gathered this weekend,” Mayor Mike Signer said.

Alternative events have been planned at both the University of Virginia and in the area for the community to take part in. More information can be found at unitycville.com and news.virginia.edu.

Charlottesville Area Transit announced it would detour multiple routes in response to planned road closures around Emancipation Park. The detour is in effect until 8 p.m. Saturday. After that, only the free trolley-style bus will be in operation.

More information about the detours can be found at charlottesville.org/catchthecat.

The City Market will operate normally Saturday from 7 a.m. to noon, according to a news release from the city’s Parks and Recreation Department. Additionally, the Rivanna Water and Sewer Authority will close the public access boat ramp at South Fork Rivanna Reservoir on Saturday, as well, which will reopen Sunday.

The Department of Motor Vehicles location on Pantops will be closed and will open again at 8 a.m. Monday.

Earlier in the day, police responded to a call at the Wal-Mart on U.S. 29 after someone allegedly brandished a weapon. Police, however, said that Unite the Right speaker Chris Cantwell was legally carrying a handgun and did not point it at anyone.

Unite the Right torch rally at University of Virginia

Those attending Saturday's Unite the Right rally on Friday marched at the University of Virginia.

Gov. Terry McAuliffe is urging Virginians to “stay away” from a large white nationalist rally planned for Charlottesville on Saturday, citing …