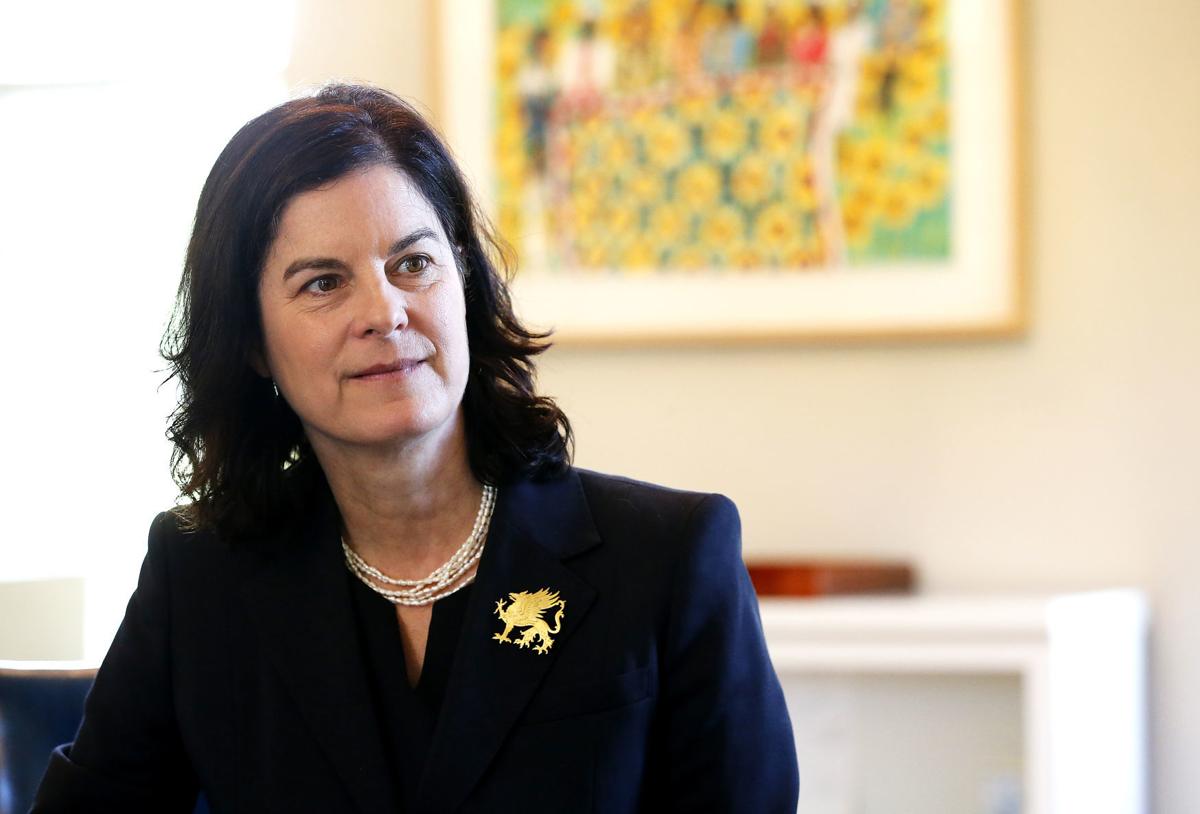 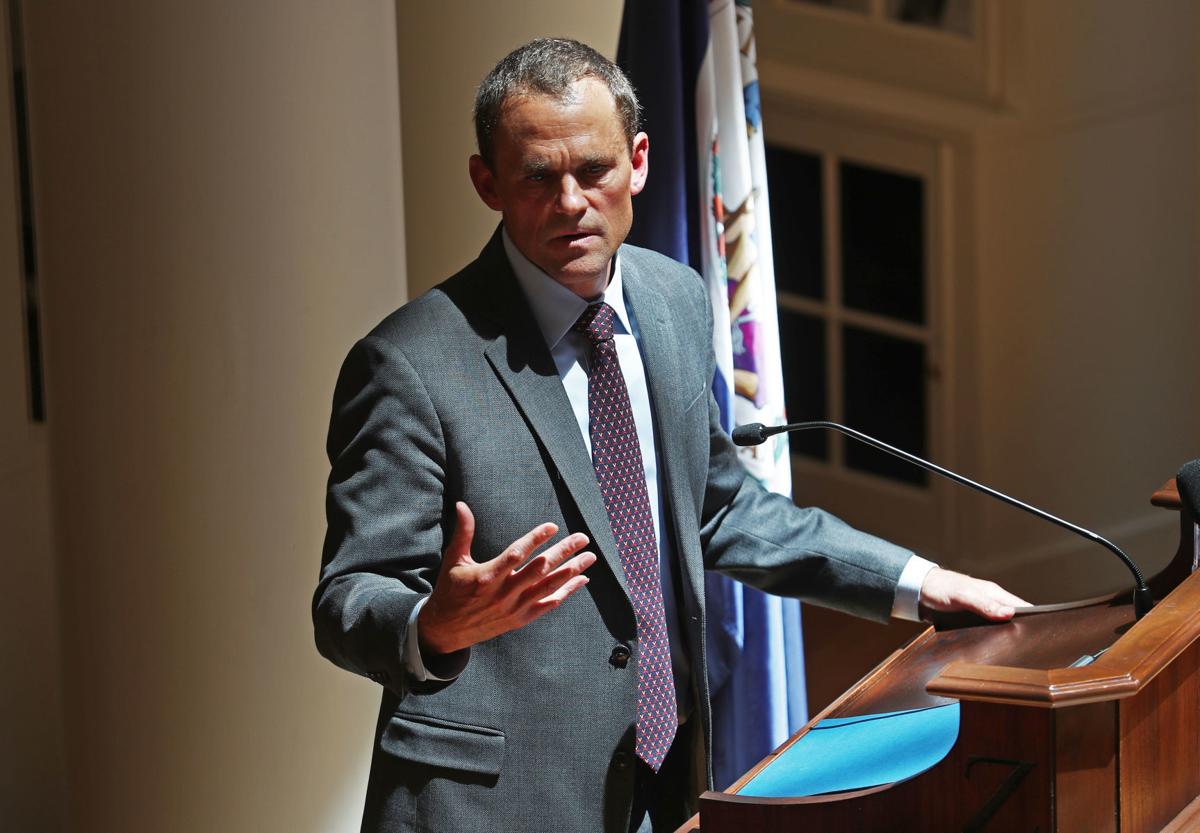 New University of Virginia President Jim Ryan speaks to members of the news media inside the Rotunda during his first day in office in 2018.

New University of Virginia President Jim Ryan speaks to members of the news media inside the Rotunda during his first day in office in 2018.

Two of Virginia’s top colleges are going to work together to fight climate change.

The University of Virginia and the College of William & Mary on Monday announced plans toward becoming carbon neutral by 2030, offsetting the schools’ greenhouse gas emissions with more renewable energy and other steps.

“Climate change is a real threat and is something that we should be taking action on,” said Calandra Waters Lake, William & Mary’s director of sustainability. “There is increasing evidence that we have a shrinking timeline in order to take that action, and although 2030 is ambitious, it is achievable. We believe it’s the appropriate thing to do.”

To do that, the universities said in a news release that they will share information with each other and collaborate on different initiatives.

For William & Mary, where the majority of the school’s greenhouse gas emissions come from electricity, that will mean looking at renewable energy. The university is considering a power purchase agreement that could result in 60% of the electricity used on the Williamsburg campus coming from solar farms.

“We believe we have an option to really address the largest source of our emissions, which is one of the reasons that we believe 2030 is so achievable,” said Waters Lake, who was hired in 2014 as the university’s first sustainability director.

Through the agreements, solar energy companies purchase, own and maintain the solar panels just like any other energy business. Colleges agree to buy the electricity produced by the solar energy system, normally for at least 25 years.

The agreements have helped lead a statewide K-12 movement toward solar energy. The number of Virginia K-12 schools with solar energy has nearly tripled in the past two years from 29 to 86, according to a report released last week by the Charlottesville-based advocacy organization Generation180.

William & Mary is also hiring a consultant to look at alternatives to natural gas for heating and steam production, an energy source that makes up roughly a quarter of the university’s greenhouse gas emissions, according to the news release.

The information from the planning and implementation of the initiatives will be shared with UVA.

In its own news release, the Charlottesville school said it will expand the number of plant-based meals offered to students, switching to sustainably raised meats and trying to reduce food waste, among other goals.

UVA’s governing board endorsed a plan in 2011 for the school to reduce greenhouse gas emissions 25% by 2026 compared with 2009 levels, a goal the university is set to reach this year, according to the news release.

Cheryl Gomez, UVA’s co-chair of its sustainability committee, said that to meet the 2030 goal, it will increase how much it uses renewable energy sources, such as solar panels.

“UVA will seek to catalyze change to advance these new, ambitious sustainability goals in ways that create replicable and collaborative models to build bridges with our community and beyond,” said Andrea Trimble, the director of UVA’s Office of Sustainability.

UVA’s board of visitors is scheduled to meet Friday to consider the new sustainability proposal.

The College of William & Mary is getting a head start toward its carbon-neutral goal.

The university also announced Monday that is has received a $19.3 million gift from an anonymous alumna to establish the Institute for Integrative Conservation.

"We believe the institute has enormous potential to accelerate actionable conservation solutions in the near term and for the future,” said William & Mary President Katherine Rowe.

The institute, which is expected to be launched next year, will focus on "integrative conservation," which looks at human and environmental challenges and hopes to balance conservation strategies with economic sustainability.

The donation will also help create a new curriculum for undergraduate and graduate students that focuses on emerging careers in conservation.

William and Mary consumes electricity at night. The solar farm does not produce electricity at night. Clearly the agreement is financial and the electrons from the panels do not flow to the University. In principle there is nothing wrong with this, just the fact that the university is willing to pay for solar power but use power generated from all other sources. At one level its smacks of a 21 century version of indulgences - to reduce the time spent in purgatory. As another level - electricity as a cost component for education must be fairly small compared to manufacturing or even retail businesses. This allows a University to pass on higher electric costs to the consumers - most already receiving subsidies from the state or subsidized loans. I hope the impact on education inflation (already a concern) is small. Yet I wonder what the net effect of gestures like this really are in helping realize a carbon free future. Just across the James river from W&M sits the Surry Nuclear Plant - already producing plenty of carbon free electricity. Most PPA agreements are limited to 10 years. Nuclear requires longer investment horizons. I think PPA's should be expanded to allow us to tap the large base power provided by Nuclear and ensure it remains a component in the mix of a carbon free future energy portfolio. And when the sun goes down - we flip the switch and happily continue living our modern lives in comfort.

Ahhh, our effete universities —wrapping themselves in a cloak of climate do-goodism, to prove they are politically correct in their “thinking.” When real science takes a back seat to virtue signaling, we know we are in trouble.

I assume that tuitions will keep rising because someone will have to pay for the solar panels.