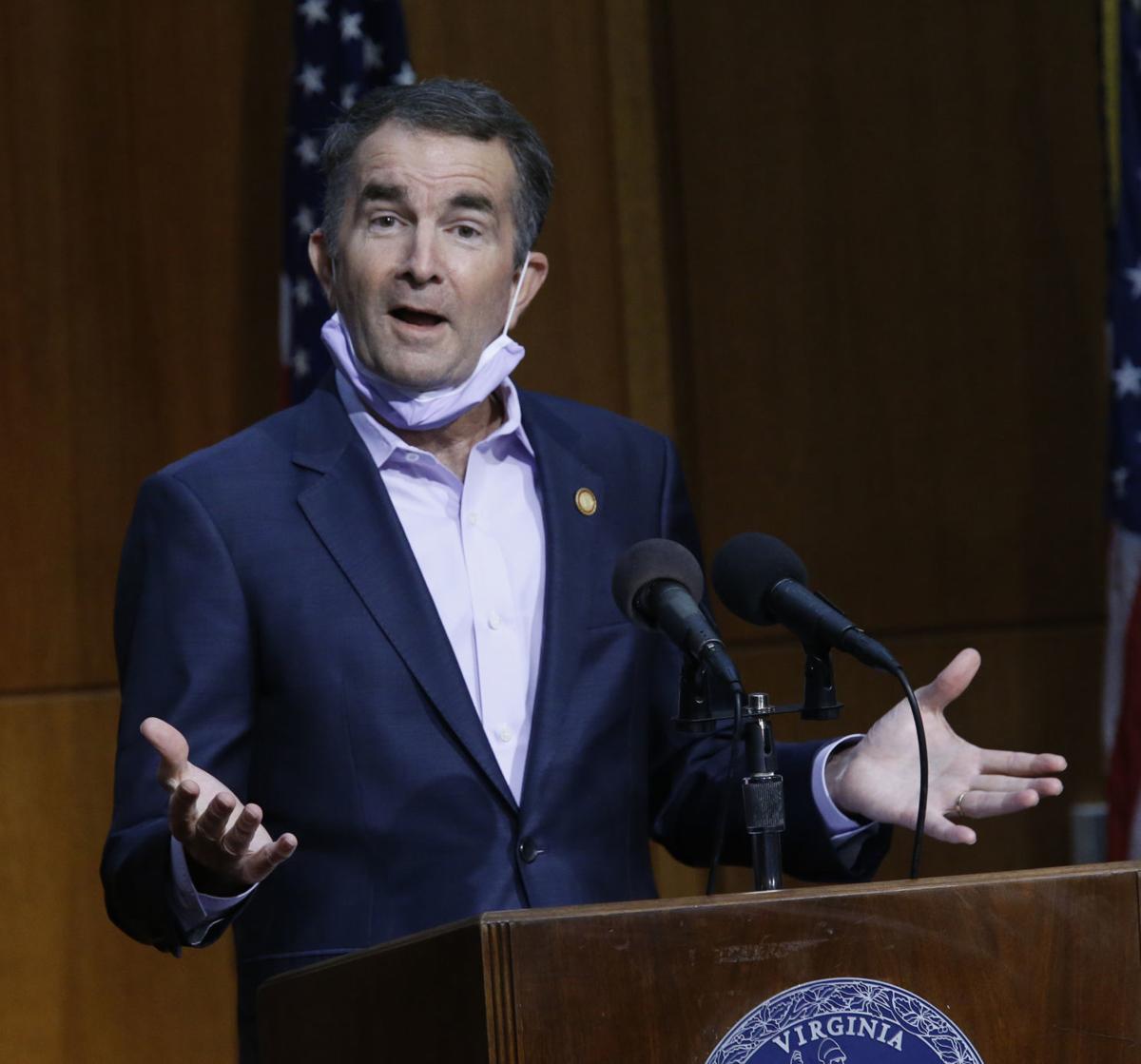 Gov. Ralph Northam fielded questions at a news conference in Richmond on Thursday. 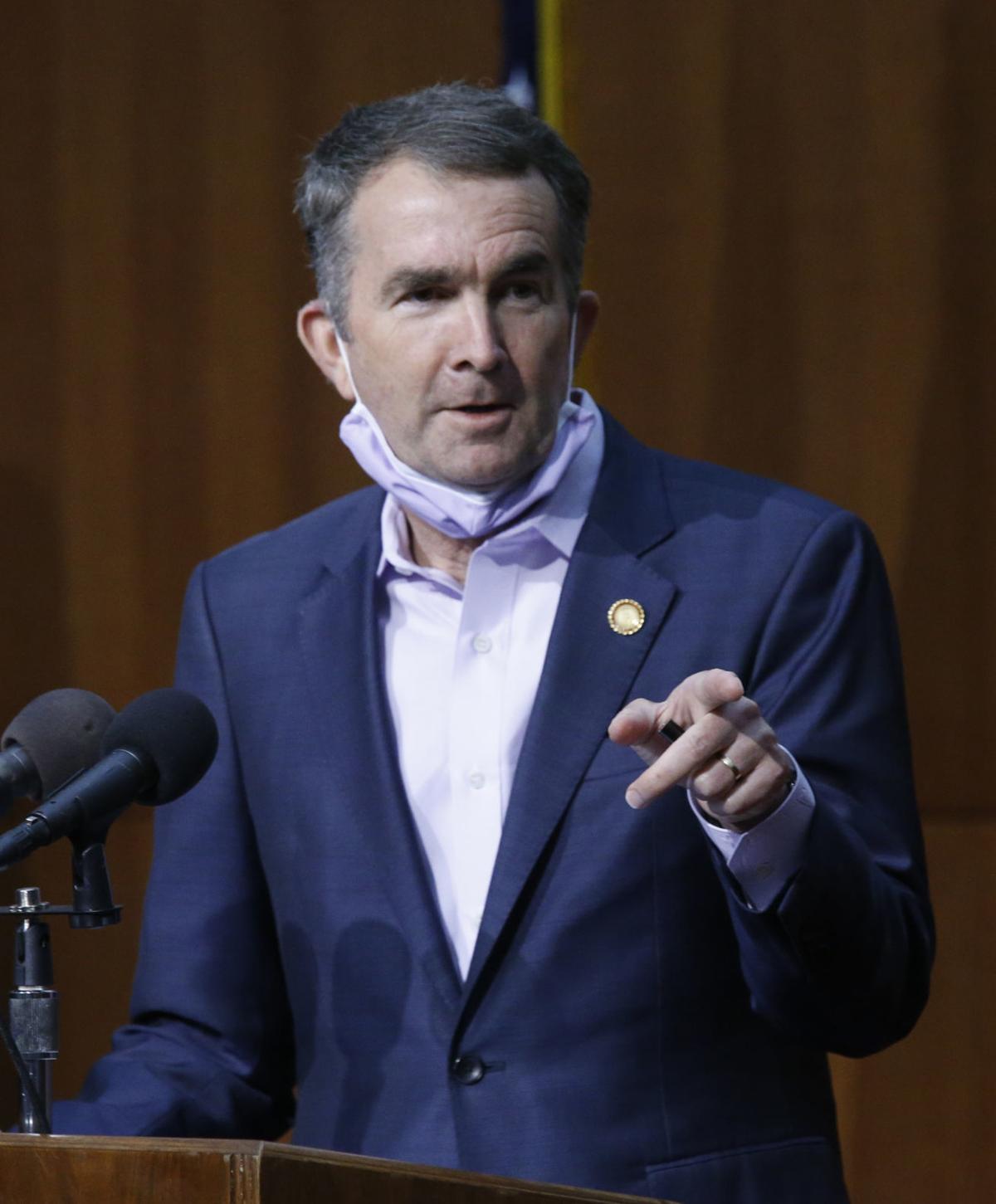 Gov. Ralph Northam said it is “just not acceptable” that thousands will face eviction when the moratorium ends. 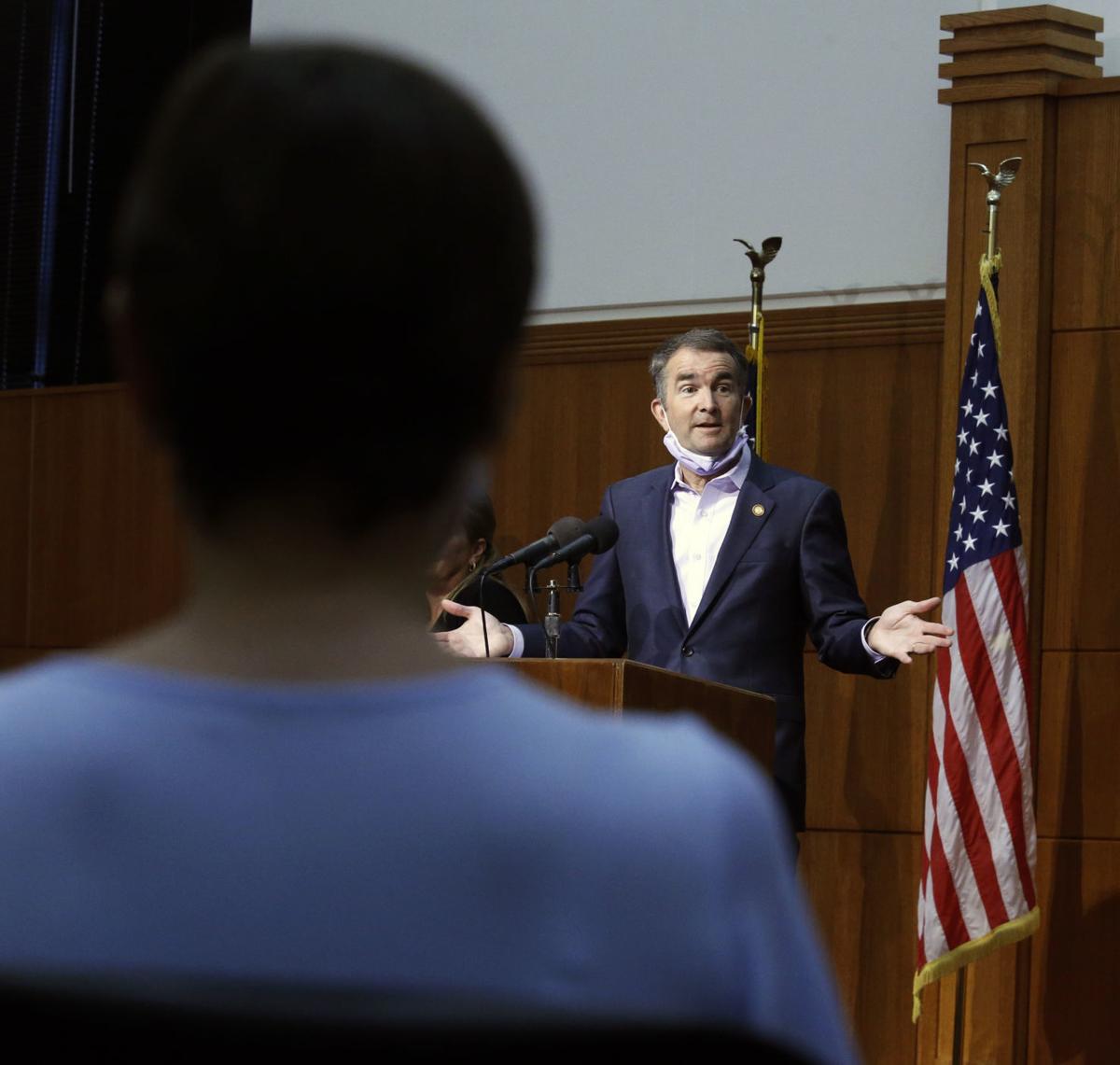 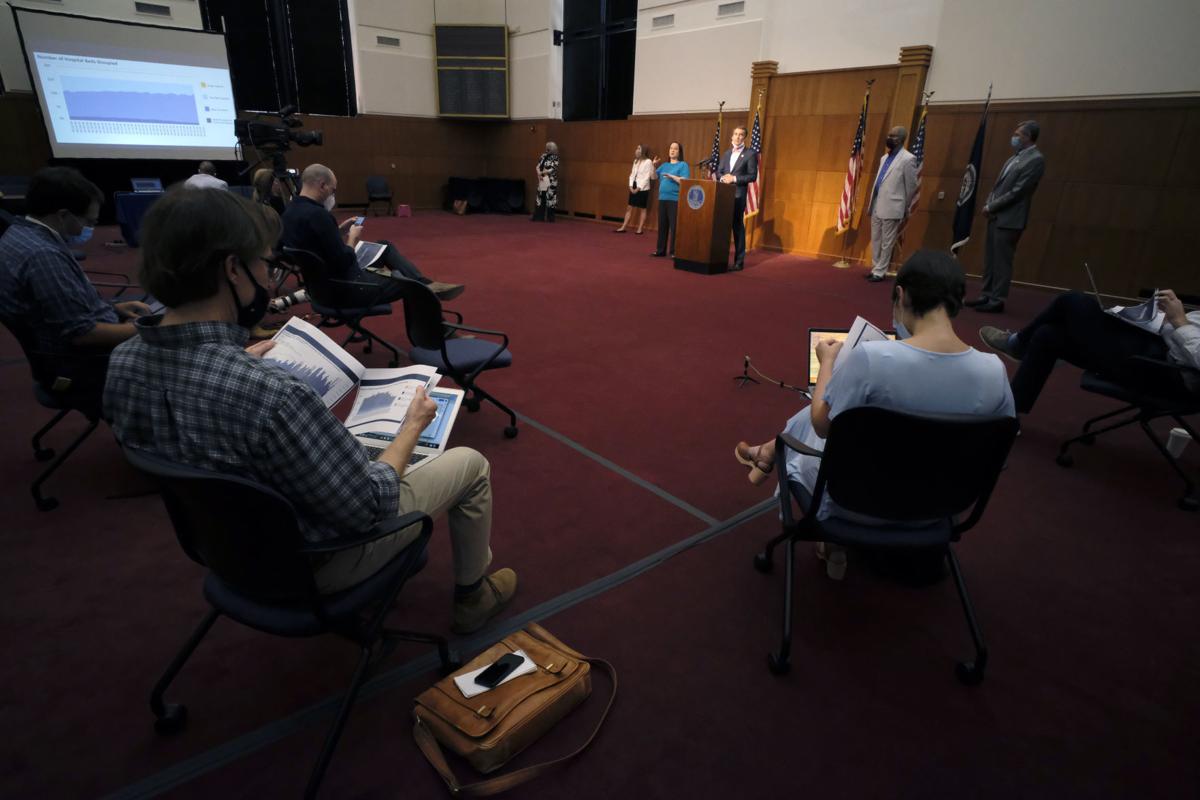 Virginia Governor Ralph Northam, at podium, answers a question during a press briefing inside the Patrick Henry Building in Richmond, VA Thursday, June 25,, 2020. 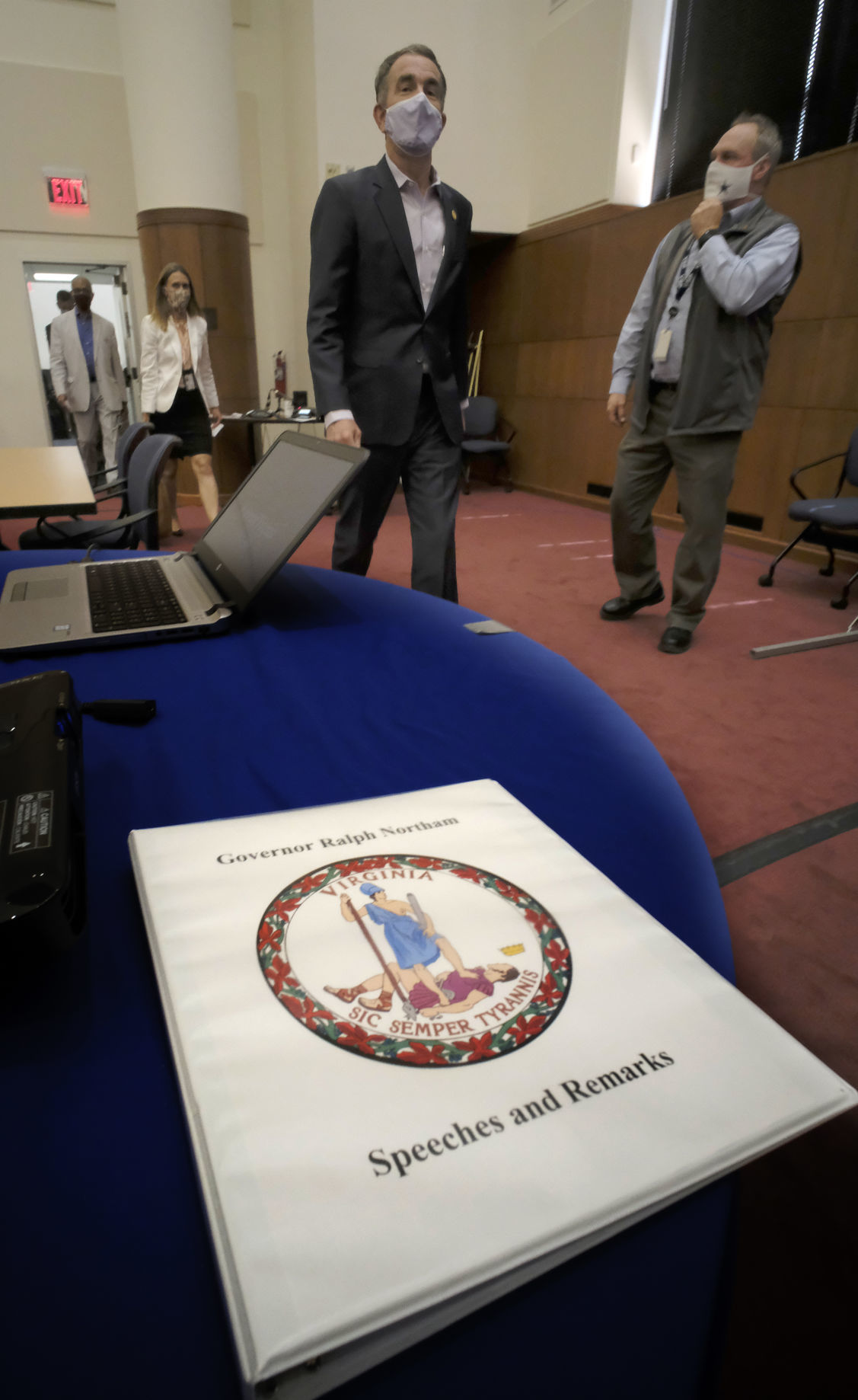 Virginia Governor Ralph Northam, center, walks past a folder as he heads into a press briefing inside the Patrick Henry Building in Richmond, VA Thursday, June 25,, 2020. 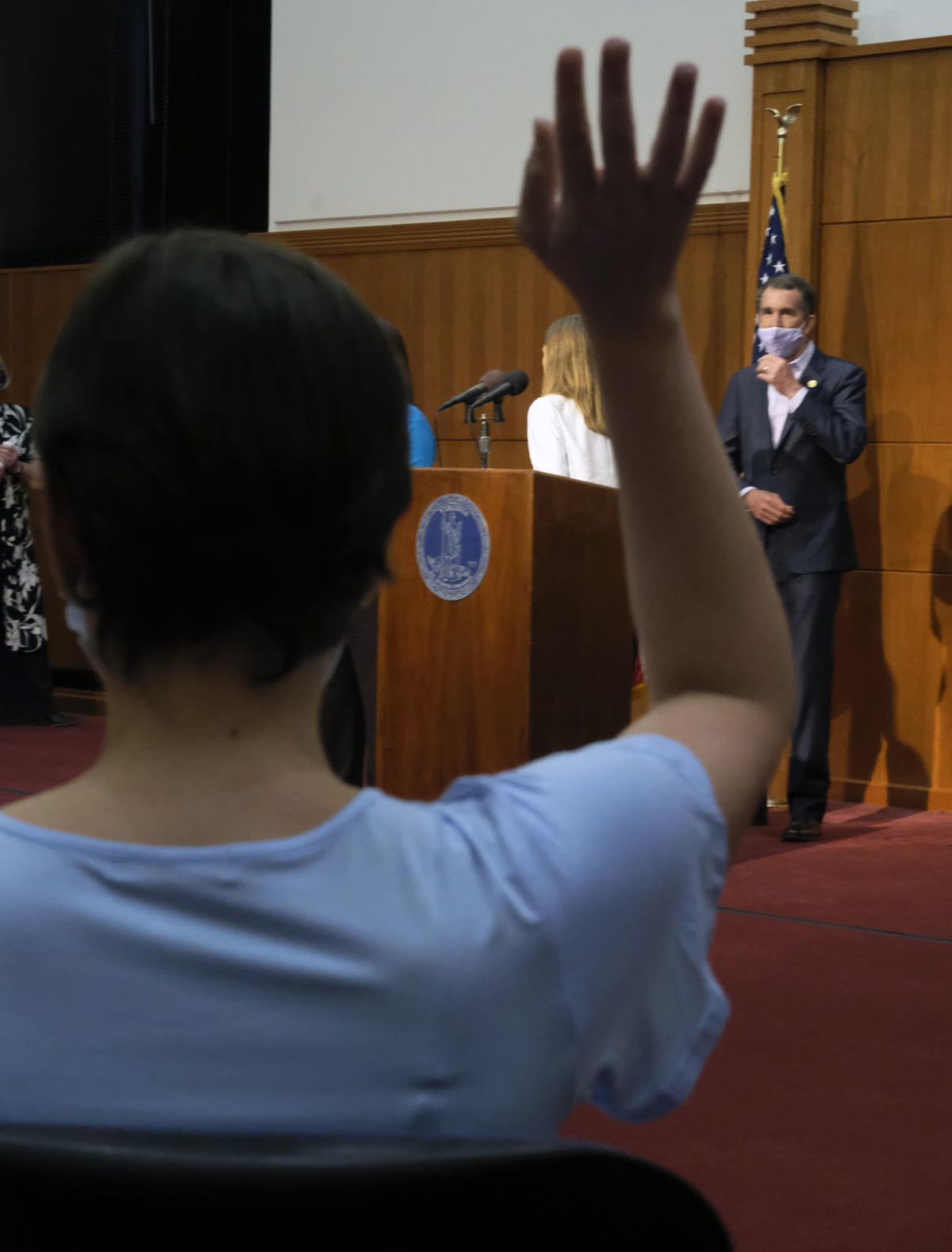 Virginia Governor Ralph Northam, rear, approaches the podium to answer a question during a press briefing inside the Patrick Henry Building in Richmond, VA Thursday, June 25,, 2020.

Gov. Ralph Northam fielded questions at a news conference in Richmond on Thursday.

Gov. Ralph Northam said it is “just not acceptable” that thousands will face eviction when the moratorium ends.

Virginia Governor Ralph Northam, at podium, answers a question during a press briefing inside the Patrick Henry Building in Richmond, VA Thursday, June 25,, 2020.

Virginia Governor Ralph Northam, center, walks past a folder as he heads into a press briefing inside the Patrick Henry Building in Richmond, VA Thursday, June 25,, 2020.

Virginia Governor Ralph Northam, rear, approaches the podium to answer a question during a press briefing inside the Patrick Henry Building in Richmond, VA Thursday, June 25,, 2020.

Gov. Ralph Northam said Thursday that the state will use $50 million in federal money to help Virginia residents pay their rent and mortgage as they deal with the economic fallout of COVID-19.

A total of $50 million for the state’s Coronavirus Aid, Relief, and Economic Security (CARES) Act funds will go to the new program, which the state is launching Monday. A statewide moratorium on evictions lifts the same day, with the Virginia Supreme Court ordering earlier this week that eviction hearings can resume.

“Once the moratorium is lifted, it is expected that thousands of Virginians will face eviction and that’s just not acceptable,” Northam said, asking chief circuit court judges around the state to bar evictions until July 20.

Northam did not ask the state’s high court for another extension, saying “we have a plan in place that we’re confident that we’ll start in time to help with this.”

“Virginians are facing a number of difficulties, but having a safe and stable place to call shouldn’t be one of them,” Northam said, adding later: “We don’t want anybody getting evicted at any time, but especially not at this difficult time.”

The state did not release Thursday specific information on how to apply for the program, which is being administered by the Virginia Department of Housing and Community Development, or the criteria to be eligible.

Virginia’s 5.12% eviction rate, representing the number of evictions per 100 rented homes, was above the national average, according to 2016 research from the Eviction Lab at Princeton University. Richmond had the second-highest eviction rate in the country, the same research found.

Richmond Mayor Levar Stoney announced this week that the city will spend $6 million in CARES Act funding to fund an eviction diversion program and provide rental assistance to residents. The mayor’s office said roughly 1,900 households in the city face a pending eviction.

“While this program is a good first step towards giving Virginians the relief they desperately need, this effort does not address that courts will resume the eviction process on June 29th, which leaves thousands of Virginians vulnerable to homelessness, and it is likely that many people will be evicted before the rent and mortgage relief program is fully up and running,” New Virginia Majority, a statewide advocacy organization, said in a statement in response to the governor’s announcement.

The Virginia Legislative Black Caucus called Northam’s announcement “a significant first step in the right direction to provide much-needed relief to Virginians, especially with the added COVID-19-related economic impacts on housing and the economy.”

“The Governor and his Administration assured us that they would focus on providing financial relief,” said Del. Lamont Bagby, D-Henrico, the chairman of the caucus. “Together, we look forward to doing more to address underlying systemic issues related to housing and doing more to help provide relief.”

The caucus reiterated Northam’s call for circuit court judges to not act on pending eviction proceedings.

So did Monica Sarmiento, the executive director of the Virginia Coalition for Immigrant Rights.

“COVID-19 pandemic has hit the immigrant community the hardest,” Sarmiento said. “During the last few months, immigrant families have had landlords illegally evicting people or have been facing eviction threats.”

Thursday’s briefing was the last of Northam’s regularly scheduled COVID-19 news briefings, which he said will transition to an as-needed basis. The governor has held 47 briefings since March 4, three days before the state’s first reported case.

State did not release “criteria to be eligible” . This is dangerous and county obligate state to the $50mill. Cares funds are tightly restricted.

Hal, just a statement of fact. I dont care what you give one way or another.

Virginia has a total population of about 8 million. Hey Northam, send every citizen a check for $1 million and they’re on their own. Some family might get like $8 million! Just saved the taxpayers $42 million. You’re welcome!

Thomas, you are copying the analytical skills of the New York Times editorial staff, and Brian Williams.

If you give 8 million people $1M, it would cost $8 trillion.

I still chuckle at beliefs of the NY Times Editorial Board member who seriously pushed her "realization" that we could give every American $1 million.....at a cost of less than $500 million.

And some are surprised by the rapid decline of journalism, and publications such as the NY Times.

Haha busted! Math never was my forte! But I WAS Under fire in Iraq, promise!

It is an easy mistake when responding quickly like we do on these comments. I am often irritated later reading typos in my posts.

However the NY Times editorial board member repeated her assertion over and over for a week or more! Even Brian Williams missed it when she again repeated it on his TV show.

You can't slip anything past all these slick folks, Thomas. Thank you for your service.

White people are struggling just like Blacks to pay their bills. Is this money earmarked only for minorities? I imagine the reverse discrimination goes on and on and on!

Bobby , you are just the Wrong Color !

I think you are right!

(of an argument or reaction) directed against a person rather than the position they are maintaining.

Rick, apparently Hal has a reading comprehension issue, as well as not believing the RTD rules on comments applies to him, actually, most of the Leftists posting here have that same issue. Civility is not one of their beliefs.

"Be truthful, nice and proactive."

Just imagine how different these comment sections would appear if the Leftists followed the rules. They certainly make themselves look bad. Sadly, I suspect they believe acting like three-old children in need of naps is a good quality.

Let's see if the state is wise enough to ensure the money goes to the debt holder, rather than the debtor. Whether Gov Northam, Mayor Stoney, or many others, somehow the people whose life savings are on the line are too often left out of the equation.

I have no problem with this money being used to prevent evictions as long it is in the form of a loan or program that the money is paid back interest-free!