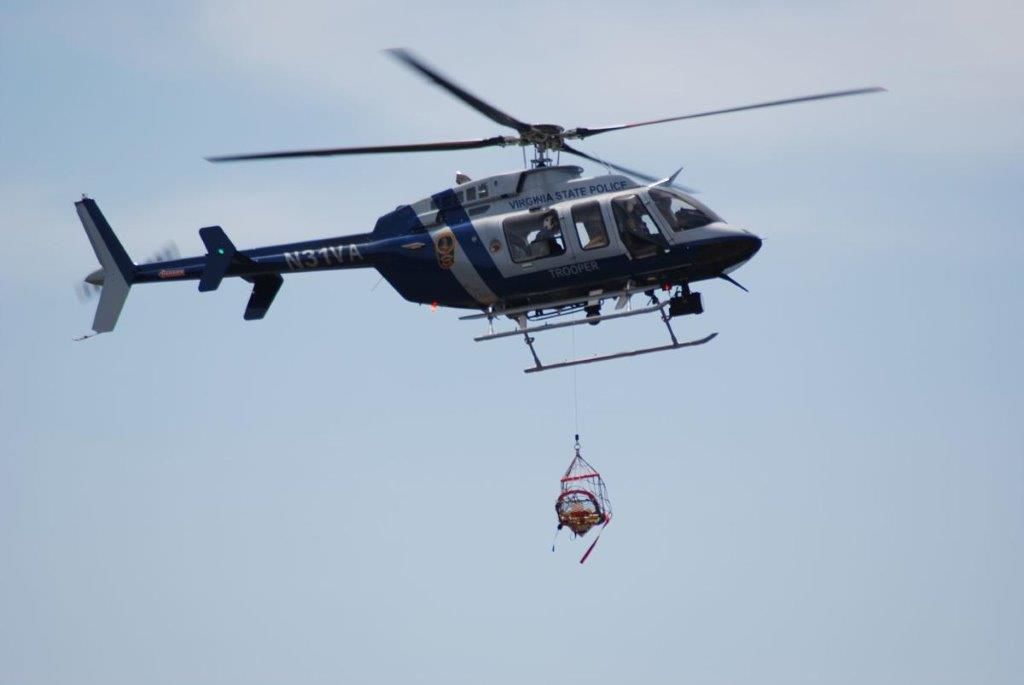 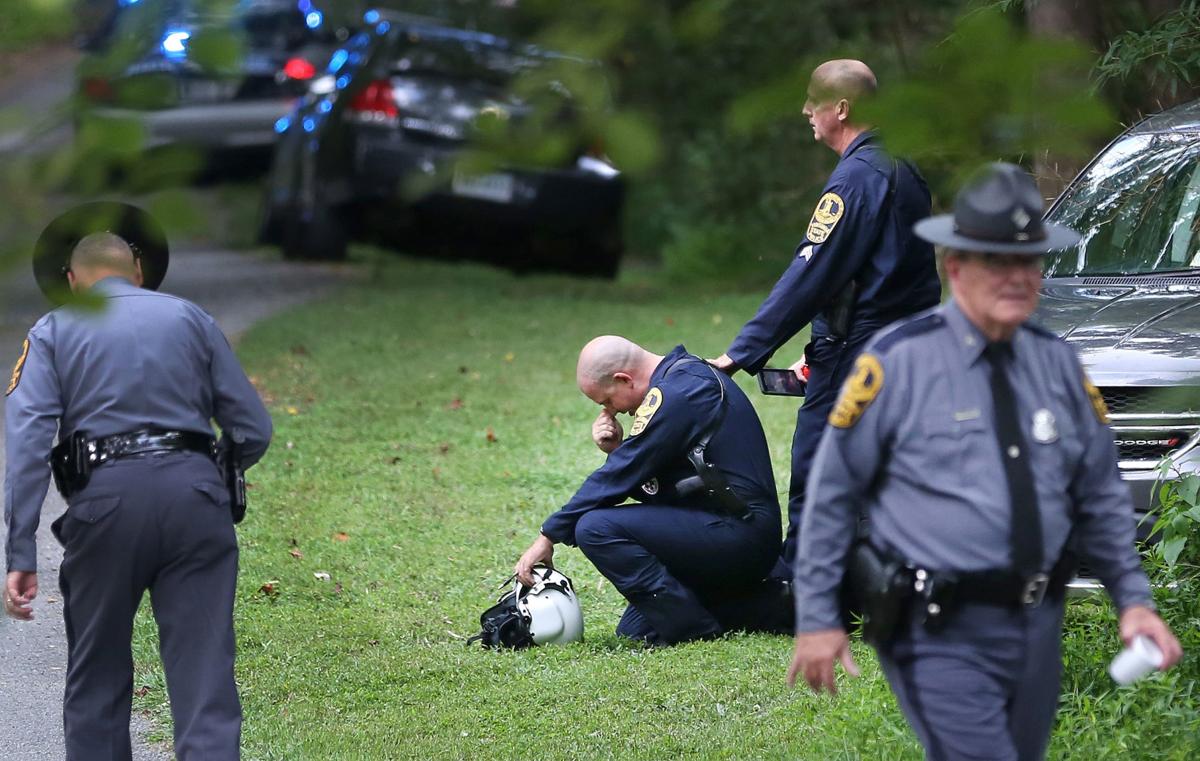 Authorities near the scene of the helicopter crash near Charlottesville on Saturday Aug. 12, 2017. Virginia State Police confirmed two deaths in the crash.

Authorities near the scene of the helicopter crash near Charlottesville on Saturday Aug. 12, 2017. Virginia State Police confirmed two deaths in the crash.

The widows of two Virginia State Police officers who died in a helicopter crash on Aug. 12, 2017, have filed wrongful death lawsuits seeking $50 million each.

Amanda Bates and Karen Cullen both filed their separate lawsuits Monday, naming the commonwealth of Virginia, the secretariat of public safety and homeland security and the Virginia State Police as defendants.

Berke M.M. Bates, 40, and H. Jay Cullen, 48, had been monitoring the white supremacist Unite the Right rally on Aug. 12, 2017. Footage from their helicopter recently was used as evidence in the murder trials of neo-Nazi James Alex Fields Jr.

In the late afternoon of Aug. 12, on the way to monitor then-Gov. Terry McAuliffe’s motorcade, their helicopter crashed, leaving both men dead.

“As they hovered in position to ensure the safety of the Governor of Virginia’s motorcade, the helicopter was seen to pitch up and down suddenly, and as they attempted to regain control, the helicopter crashed into the ground and burst into flames,” the complaint reads.

“Both [Bates] and [Cullen] perished in the conflagration that enveloped the helicopter primarily due to the lack of proper maintenance and repair of the helicopter by agents and/or employees of the Virginia State Police, PSHS and/or Commonwealth of Virginia, and their failure to comply with all necessary or appropriate service bulletins or airworthiness directives, such as the ones described above.”

According to the lawsuits, the helicopter — a Bell 407 manufactured by Bell Helicopter Textron — was difficult to maintain and had a history of malfunctions and repairs.

“From the outset, the Bell 407 demonstrated itself to be a maintenance nightmare with many Service Bulletins and Airworthiness Directives mandating that certain inspections and maintenance be performed to keep it flying (airworthy),” the complaint reads.

Due to negligence from the defendants, there was nothing the troopers could have done to prevent their deaths, the complaint argues.

“[Troopers Bates and Cullen’s] fear of impending death is unspeakable as every pilot knows that loss of control and power in a helicopter at a low altitude in a hover is a doomsday sentence such that no matter what step was or could be taken to save themselves, it was an exercise in futility, and that death was certain by hideous mutilation,” the complaint reads.

Due to a loss of financial contributions, companionship and care, the families of the troopers are seeking $50 million jointly and severally from the defendants, $350,000 in punitive damages, plus prejudgment interest and other costs.

In June, the widows filed wrongful death lawsuits in Albemarle County Circuit Court against the Rolls Royce Corp., which manufactured the Rolls Royce Allison 250 engine used in the chopper.

Investigators from the National Transportation Safety Board still are not close to rendering a final verdict on why the aircraft fell out of the sky, according to the Richmond Times-Dispatch.

Soon after the crash, the NTSB estimated the agency’s final report would be completed within 12 to 18 months. It’s now 24 months and counting and a spokesman for the NTSB said that the final decision is not expected until next year.

The preliminary NTSB report, released just under a month after the crash, suggests mechanical failure of the aircraft’s main rotor system or tail rotor likely caused it to spin out of control and crash, according to an aviation expert who reviewed the report in September 2017 for the Times-Dispatch.

According to the report, the helicopter began to spin or rotate on its vertical axis and then descend nose down, continuously spinning, before it was no longer visible before the tops of surrounding trees.

Last year, the General Assembly appropriated $1.9 million for fiscal year 2020 as the first-year debt payment for a new $6 million Bell 407 similar to the one that crashed. It also allocated money for a new medical evacuation helicopter that will replace a 2010 model. Delivery of the new helicopters is expected in 2020.

The companion wrongful death lawsuits were filed in Albemarle County Circuit Court in June on behalf of Amanda Bates and Karen Cullen, whose husbands died in a helicopter crash while monitoring the Unite the Right rally.

Wrong again. Fred is no longer satisfied with half-truth fake news. He is doubling down on the lies in his pathetic attempt to criticize democrats.

“How long can various types of helicopters hover in one place and how difficult is it?

I Googled the helicopter, and there is nothing noted about deficiencies. It seems to be a popular helicopter model. The way it was used in the police surveillance might have been risky but that is what they do. Bottom line, their loss is tragic and horrible. Police and Fire protection careers are dangerous professions.

Careers made even more dangerous by white supremacists, which Rump have a supportive shout out to, invading a peaceful community.

Seems like misdirected blame...why not the blame on the helicopter manufacturer?

Hmmmmmm why is the state buying another same exact helicopter? According to the lawsuits, the helicopter — a Bell 407 manufactured by Bell Helicopter Textron Canada — was difficult to maintain and had a history of malfunctions and repairs.

I was about to send the same question.

Why invest in a proven lemon?

The Bell 407 helicopter is not a lemon. The Bell 407 has been in production since 1996 with more than 1,400 helicopters now in operation. The Bell-407 is currently being considered to become the Navy’s next training helicopter. You can find more information about the Bell 407 on Wikipedia.

They need to. These courageous women need to expose exactly what happened. I can’t believe we have all the parts of the crash and are you telling me two years later we have no clue why? I think these wives need to get their day in court. Just like Goodyear. Google Goodyear tire g159. I then I ask. If they don’t know why the helicopter crashed why are they buying another of the same type?