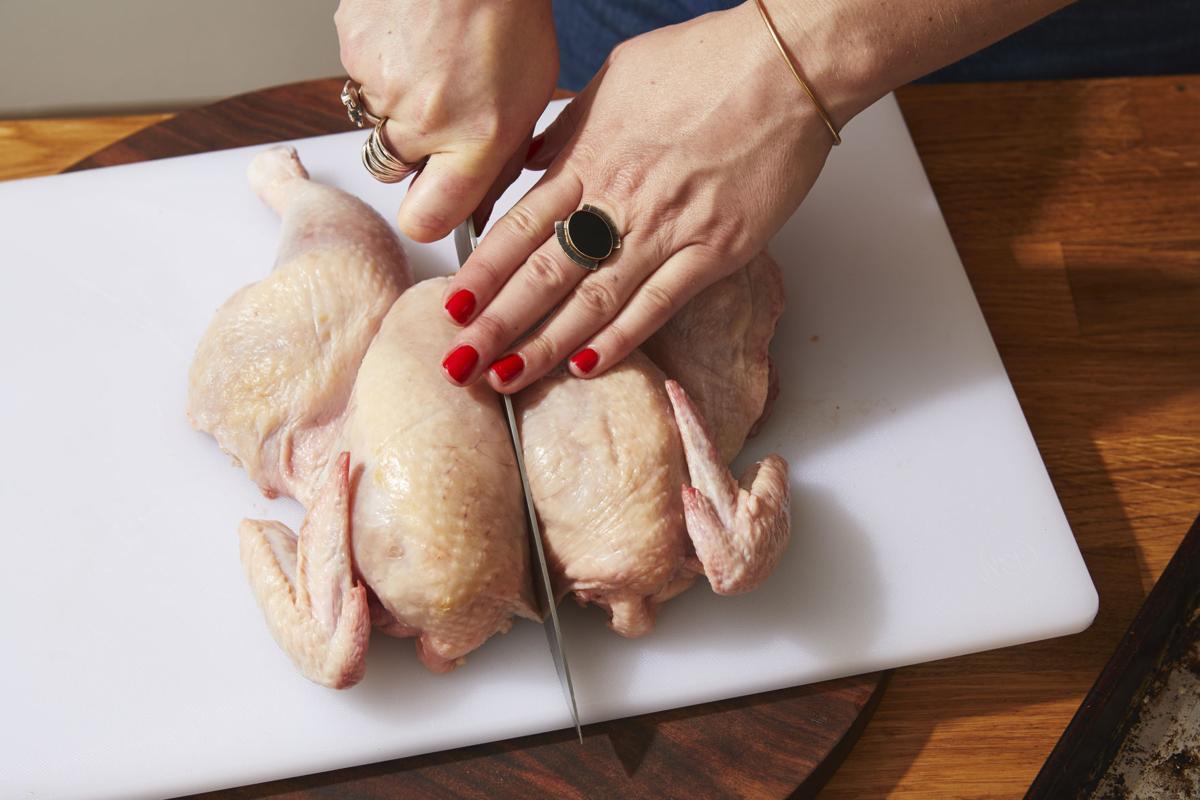 Cut up a chicken or use bone-in, skin-on chicken parts for this sheet-pan dish. 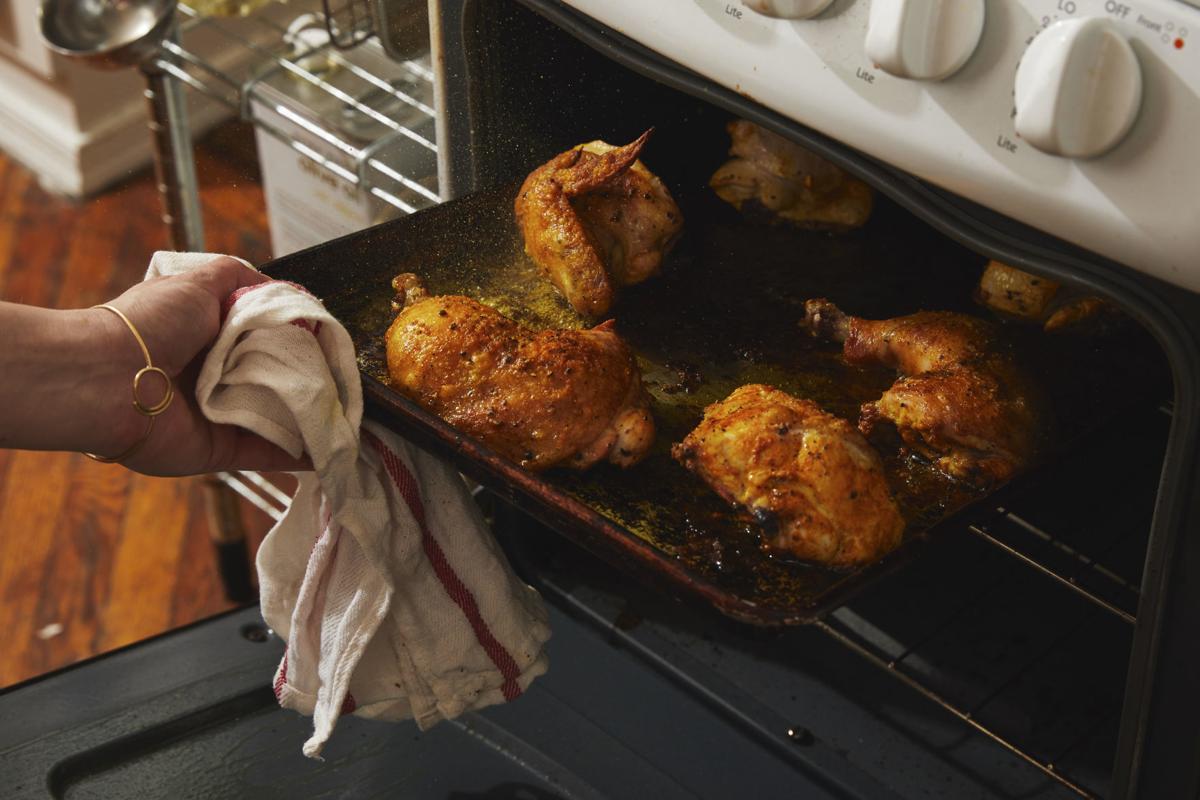 Chicken is baked skin-side up with vinegar poured on and around it. 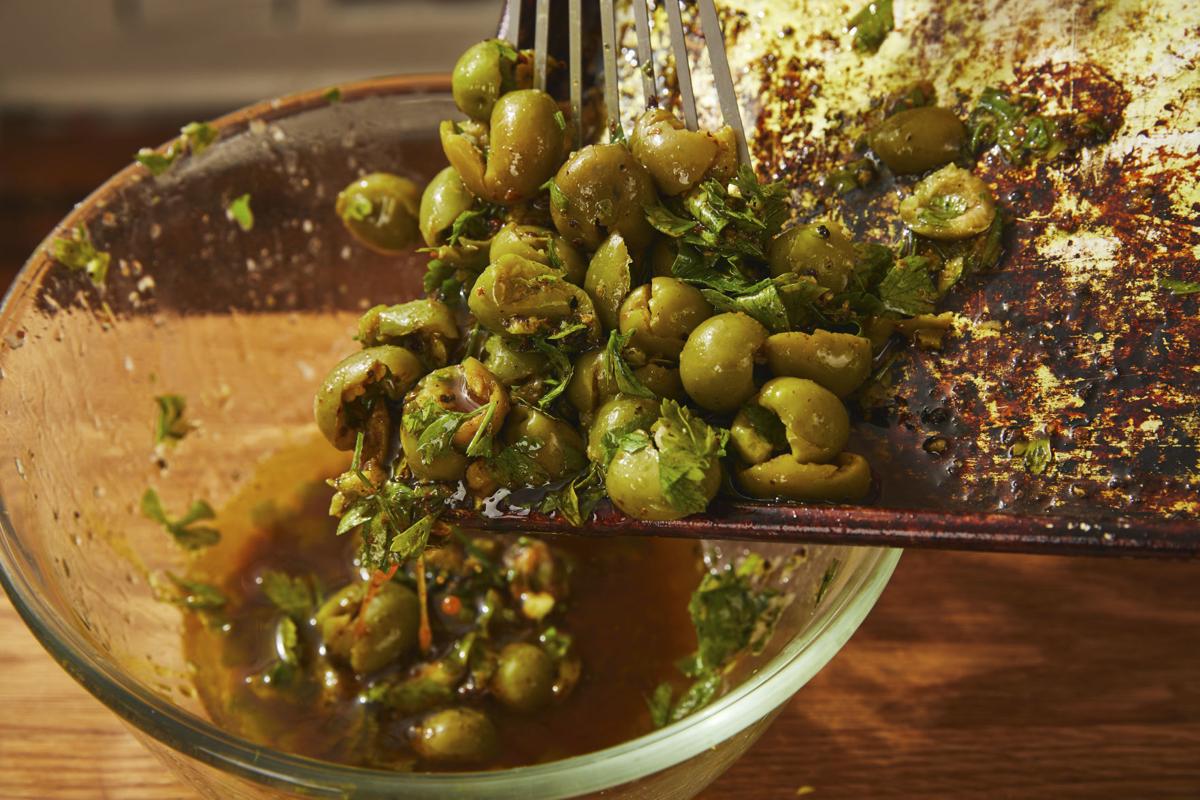 A crushed olive dressing deglazes the sheet pan after the chicken bakes.

Cut up a chicken or use bone-in, skin-on chicken parts for this sheet-pan dish.

Chicken is baked skin-side up with vinegar poured on and around it.

A crushed olive dressing deglazes the sheet pan after the chicken bakes.

As a young (overworked, maybe arrogant) restaurant cook, I took “weeknight cooking” to mean the sort of lazy, phoned-in dishes you ate after work, the things you made just to stay alive when you were too exhausted to cook anything else. Limp spaghetti tossed with the dregs from a jar of sauce, 2-day-old rice with an egg on it — all things I’ve happily eaten, but would now classify as “personal cooking,” not “weeknight cooking.”

Now that I’m not working till 2 a.m. and occasionally like to eat dinner at a reasonable hour, it has dawned on me that “weeknight cooking” doesn’t mean lazier; it means smarter.

For a recipe to qualify as such, I feel as if I’ve got to be cheating the system a little: a pantry ingredient that allows me to cut back on simmering time, a technique that allows me to wash one less bowl, a move so clever I’m still basking in the warm glow of my own smugness long after the last bite. “Better than it ought to be” is something I might say after eating a particularly good weeknight meal.

Sure, it’s a simple sheet-pan chicken, joining the many thousands of weeknight recipes that exist in which you cook chicken by roasting it on a sheet pan. But this one feels different because it avoids the obvious downside of cooking this way: that the best parts of cooking chicken (the fat and crispy browned bits) are lost to the sheet pan, tossed into the sink to soak and poured down the drain instead of over my chicken and into my mouth.

Instead, this recipe makes use of all those golden chicken-y bits still stuck on that pan by pouring a mixture of olive oil, raw garlic, crushed briny olives and a little bit of water over them and using a spatula to scrape up all the goods, making a rich, tangy, decidedly schmaltzy sauce to pour over the chicken. The first time I did this, I wondered if they gave out Pulitzer Prizes for chicken recipes. (I checked; they don’t.)

Of course, I was not the first person to deglaze a sheet pan, but nevertheless, it made me feel smart and, yeah, a little smug. I was using a sheet pan to cook chicken because it was the best way, not just the easiest way. A true weeknight meal, if I do say so myself.

Heat oven to 450 degrees. Place chicken on a rimmed baking sheet and toss with turmeric and 2 tablespoons olive oil, and season with salt and pepper. Make sure chicken is skin-side up, then pour vinegar over and around chicken and place in the oven.

Bake chicken, without flipping, until cooked through and deeply browned all over, 25 to 30 minutes.

Once chicken is cooked, remove baking sheet from the oven and transfer chicken to a large serving platter, leaving behind any of the juices and bits stuck to the pan.