During the holidays, a Richmond Synchro team gave a preview at SkateNation Plus of the routine it will do in competition in New York this week. 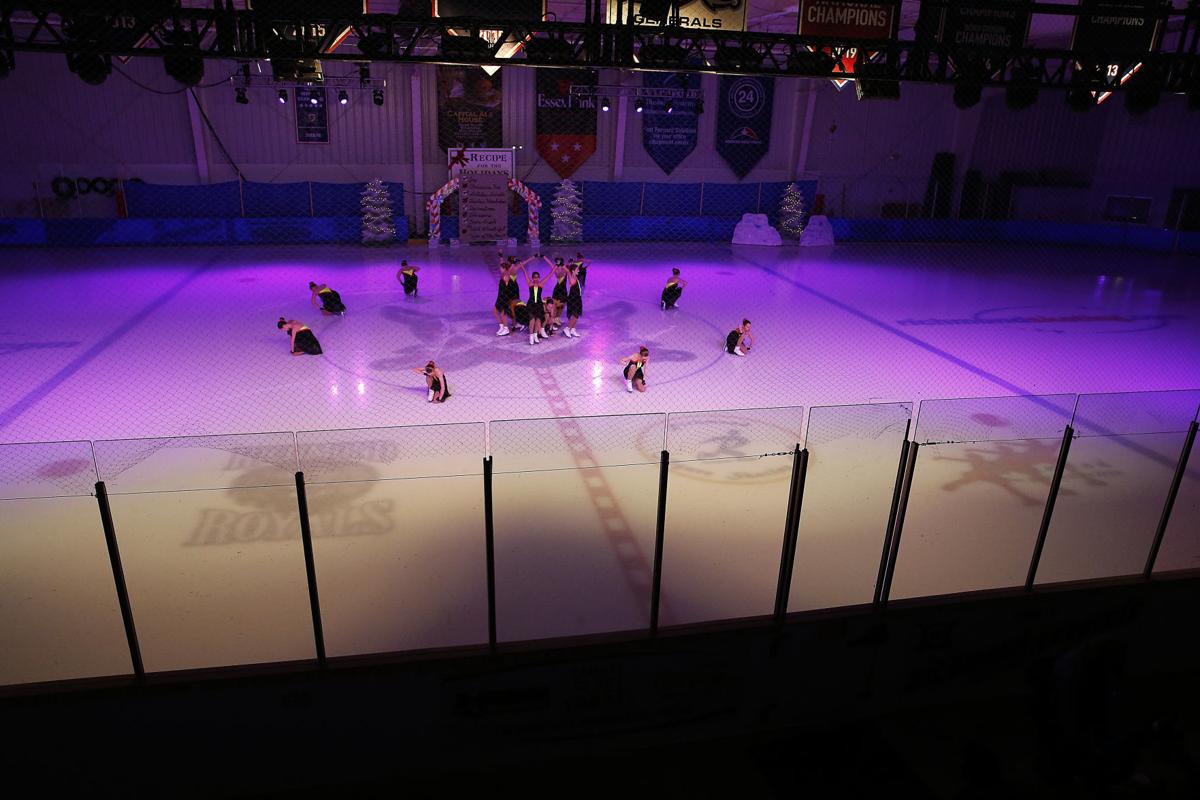 Richmond Synchro, which started in 2001, attracts 60 to 70 skaters each season who make up roughly four to six teams. 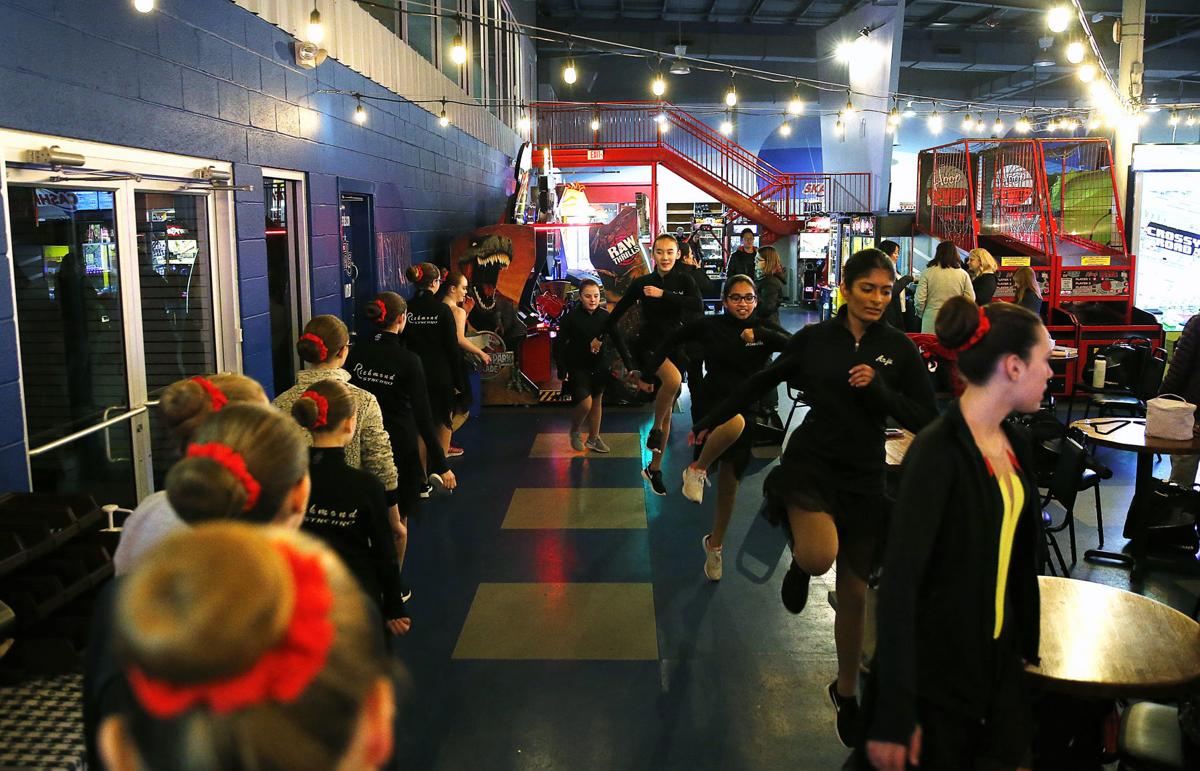 Members of Richmond Synchro warm up before a performance at SkateNation Plus in Short Pump Wed. Dec. 18, 2019. 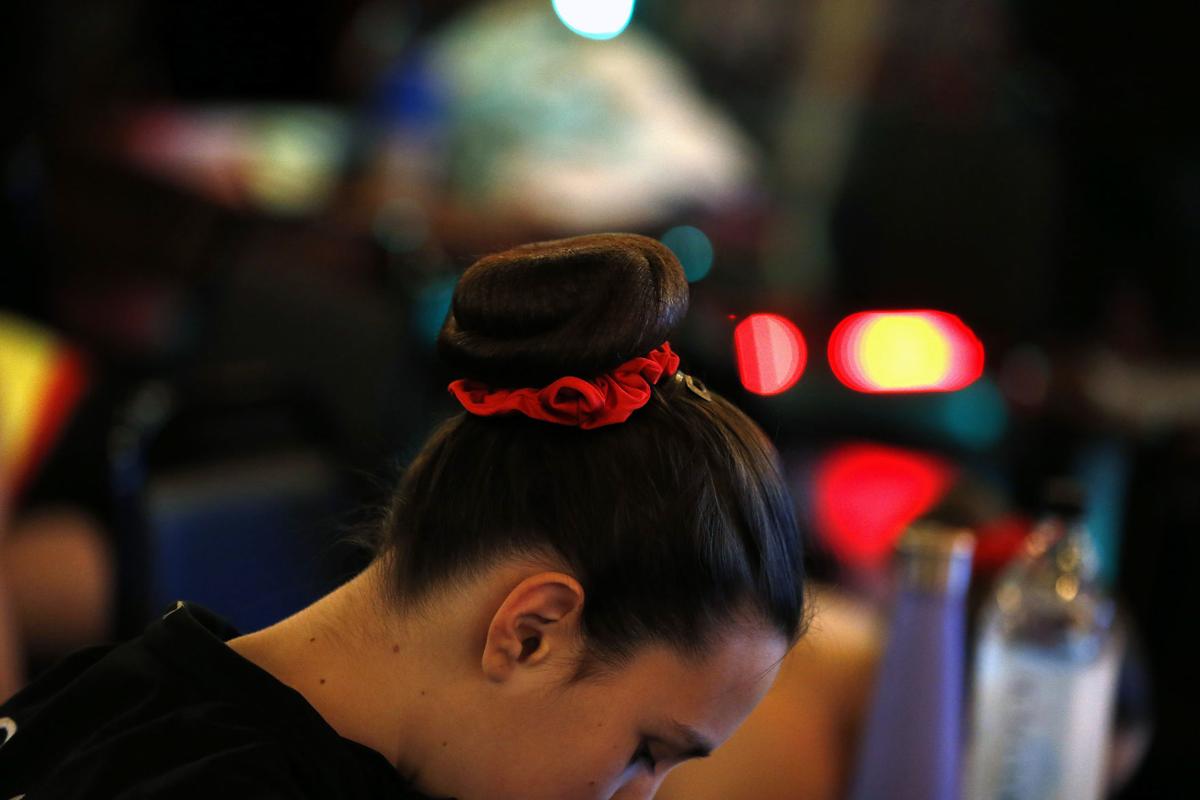 A member of Richmond Synchro prepares for a performance at SkateNation Plus in Short Pump Wed. Dec. 18, 2019. 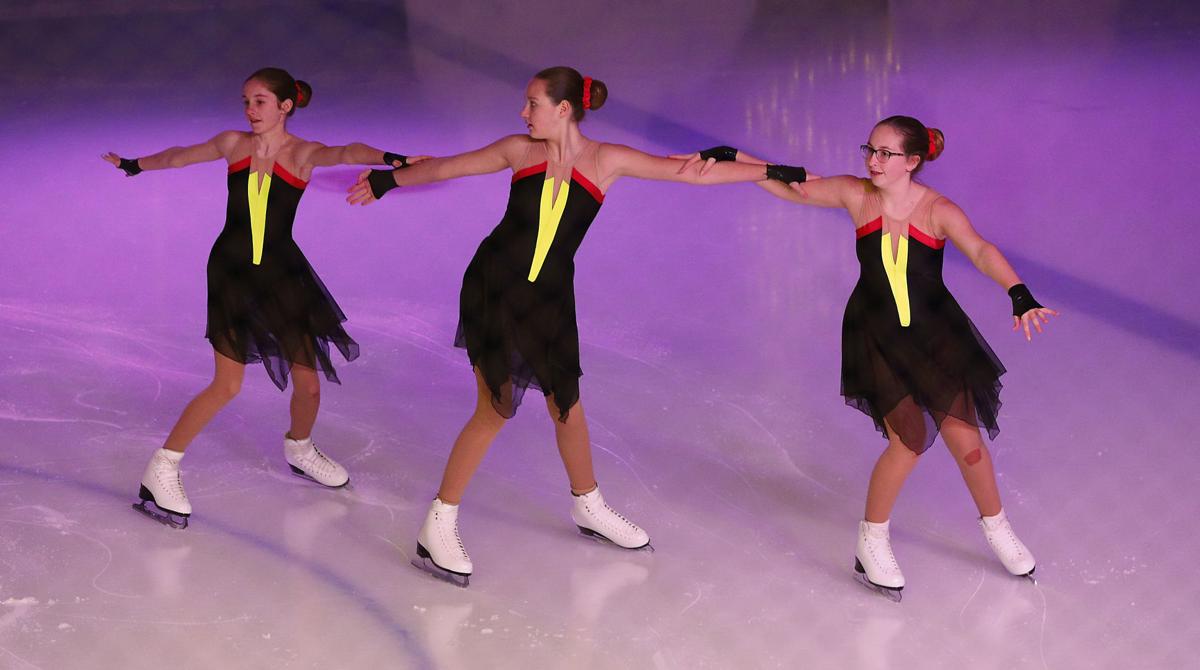 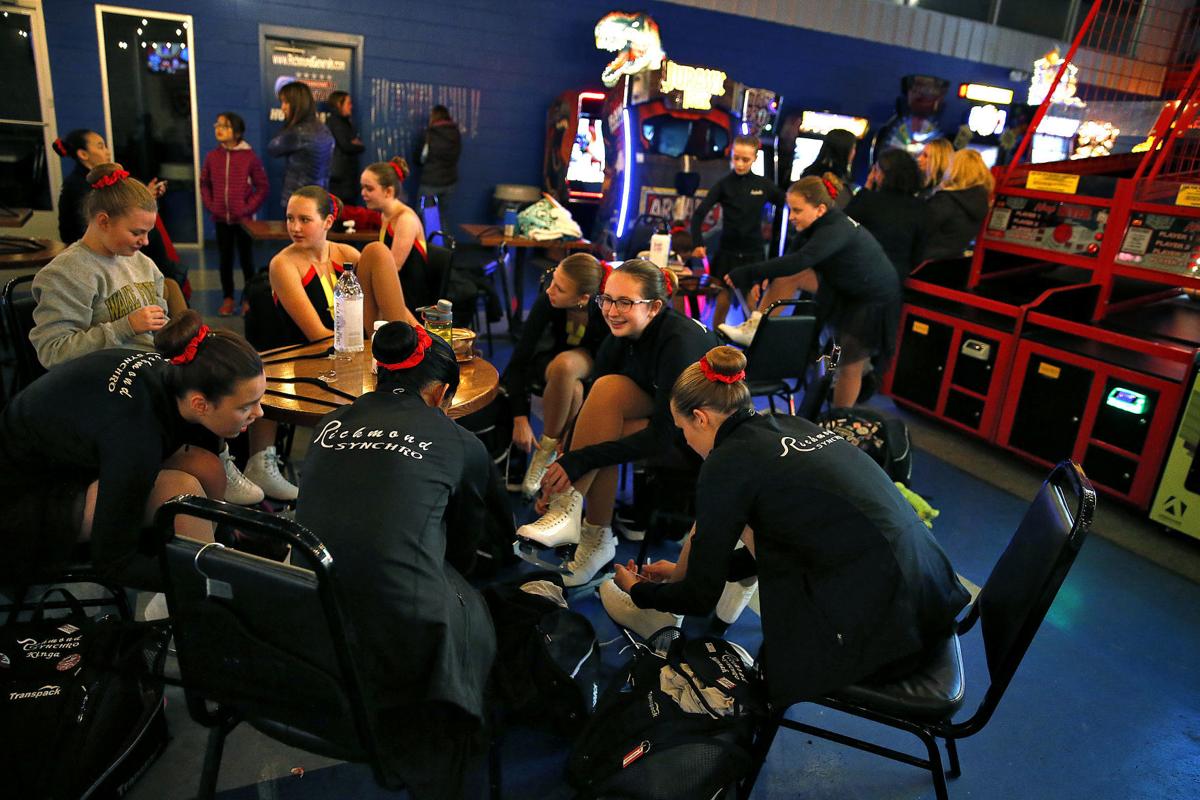 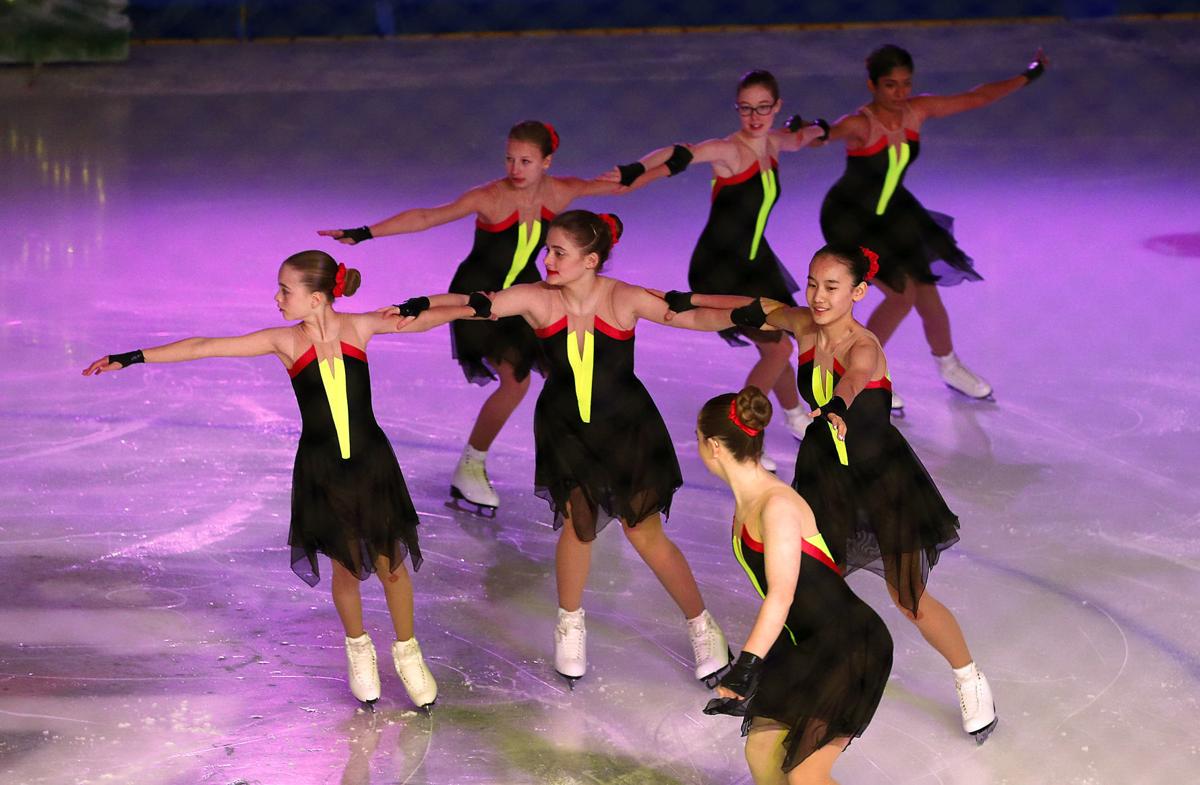 During the holidays, a Richmond Synchro team gave a preview at SkateNation Plus of the routine it will do in competition in New York this week.

Richmond Synchro, which started in 2001, attracts 60 to 70 skaters each season who make up roughly four to six teams.

Members of Richmond Synchro warm up before a performance at SkateNation Plus in Short Pump Wed. Dec. 18, 2019.

A member of Richmond Synchro prepares for a performance at SkateNation Plus in Short Pump Wed. Dec. 18, 2019.

Richmond Synchro team members, here warming up before a performance, are grouped according to their skating abilities, not their age.

Moving in lines and concentric circles, 16 skaters flew around the ice rink inside SkateNation Plus in Henrico County last month, leaning on one another’s shoulders as their formations took shape under colored spotlights. At times the lines and circles broke apart and skaters weaved around one another, only to join again two or three steps later as they moved into completely new formations.

Fancy footwork, all right, though the slightest missteps of just one or two skaters could’ve sent ripples through the entire group.

You’ve heard of synchronized swimming. This, however, is Richmond Synchro, a synchronized ice skating organization that started in 2001 and represents teams of ice skaters from all over central Virginia.

The team on the ice on that night was the club’s open juvenile team, one of three teams heading to New York later this week to compete in the Eastern Synchronized Skating Sectional Championships. The roughly three-minute performance was a preview of what they’ll be doing up north, and while they came off the ice smiling, one skater admitted later that they were skating slower than normal to avoid the holiday-themed props on the ice that night.

The entertained audience was none the wiser.

Richmond Synchro attracts 60 to 70 skaters each season who make up roughly four to six teams, including one adult team this year for anyone 18 and older. Outside of Richmond, synchronized skating programs exist nearby in Virginia Beach and Northern Virginia.

Though its origins go back decades, synchronized skating was recognized by the Switzerland-based International Skating Union — the world’s oldest governing international winter sport federation — as an official skating discipline in 1994, joining speed skating, short track skating and figure skating. Back then it was called precision skating, but the name changed to synchronized skating in 1998.

The sport is also one of five U.S. Figure Skating disciplines, joining men’s and women’s singles, pairs and ice dancing.

Often pursued as an individual sport, synchronized skating offers something that other skating disciplines lack: a team environment.

That appeals to a lot of skaters, said Cathy Diskin, team manager for the open juvenile team. Diskin has three daughters, and all of them skate.

“My girls liked skating, but they didn’t want to do individual figure skating competitions,” she said. “They wanted to be on a team” and experience all that comes with that, from weekly practices to the camaraderie that happens among teammates when they travel to competitions.

Richmond Synchro “gives you that environment, but on the ice instead of a basketball court or soccer field,” she said.

The skating season typically runs nine or 10 months of the year, with auditions in the spring and the season starting in early summer. Youth skaters practice upward of four to six hours per week, including team training and private one-on-one training. Costs average about $1,800 for the season, plus costumes and travel expenses.

There is some off-ice conditioning required, but, mostly, the work happens at the rink.

“The hard thing about skating is that you have to be on the ice — you can’t do it anywhere else,” Diskin said.

Unlike with many organized sports, synchronized skating teams are built by ability, not age.

Skaters are tested against U.S. Figure Skating standards. Therefore, ages can vary widely on one team. For the youth teams, it’s common for elementary-age and high school skaters to be placed together if they all have similar skills.

Or, in some cases, parents and their children.

Maria Slowe, 53, and her daughter, Bridget, 14, both skate — Mom on the adult team and daughter on the open juvenile team.

A former figure skater in her youth, Slowe said she had been asking Richmond Synchro to form an adult team for several years. This season, they obliged. Auditions were in August, where nine people were chosen for the team. They compete right along with the youth teams.

Skating for the first time in more than 30 years — well, it was like riding a bike, Slowe said. Sort of.

“I was terrified the first time,” she recalled, but after you’re on the ice, “you forget you’re doing it, and you just do it.”

A command heard from time to time among her group: “Everyone stay vertical.”

“Our goals are not to embarrass ourselves,” Slowe said jokingly, admitting that while “we want to get it right ... the adults have a lot more fun.”

She also said, “I hope it sends a message to my daughter [that] you can do anything at any age — exercise and recreation are not just for kids.”

No matter the ability, Stephanie Meier, Richmond Synchro’s longtime former director and now a coach, said, the organization strives to offer something for everyone, from beginners programs to elite coaching.

“We want to be able to have anyone walk in the rink at whatever level ... and find a team that’s right for them,” Meier said, adding that what they do with that training is up to them.

Some youth skaters seek collegiate teams — universities from Delaware and Ohio to New Hampshire and Michigan offer synchronized programs. Beyond that, Meier said Richmond Synchro has sent skaters to Team USA, Team Canada and Team Germany at the national and international levels.

“We feel like we can give you a foundation to take this anywhere you want to go,” she said.

Well, except the Olympics — at least, for now.

Getting to the world’s largest athletic stage has proven difficult. According to the U.S. Figure Skating website, the International Skating Union has twice sought approval to include synchronized skating in the winter games — first in 2018 in South Korea and then again for the 2022 games coming up in Beijing. Neither proposal was approved.

Meier said the barriers likely come down to logistics; adding team sports in the Olympics is always more complicated and costly than adding individual sports because of the sheer number of people involved. Athletes, coaches and others, at least 150 to 200 people, would have to be housed and fed and — potentially — awarded medals, and since it would not replace another sport, it could require more time, adding on to the Olympic schedule.

There’s also the issue of the lack of participating countries. China, the next Olympic host country, has never participated in synchronized skating, and while nearly 30 countries have been represented at the world championships, which started in 2000, two countries — Sweden and Finland — have won nearly all of them.

Despite the obstacles, “it seems promising,” Meier said, particularly as synchronized skating gains popularity both at home and abroad. In the meantime, she said, U.S. skating organizations continue to work to improve their synchronized programs so that when the sport is accepted into the Olympics, Americans will be medal-contenders.

“I feel like we’d have a goal to be in that Olympic program,” said Natalie Orr, 14.

Caroline Diskin, also 14, agreed. “I would be really excited to see something I do in the Olympics.”