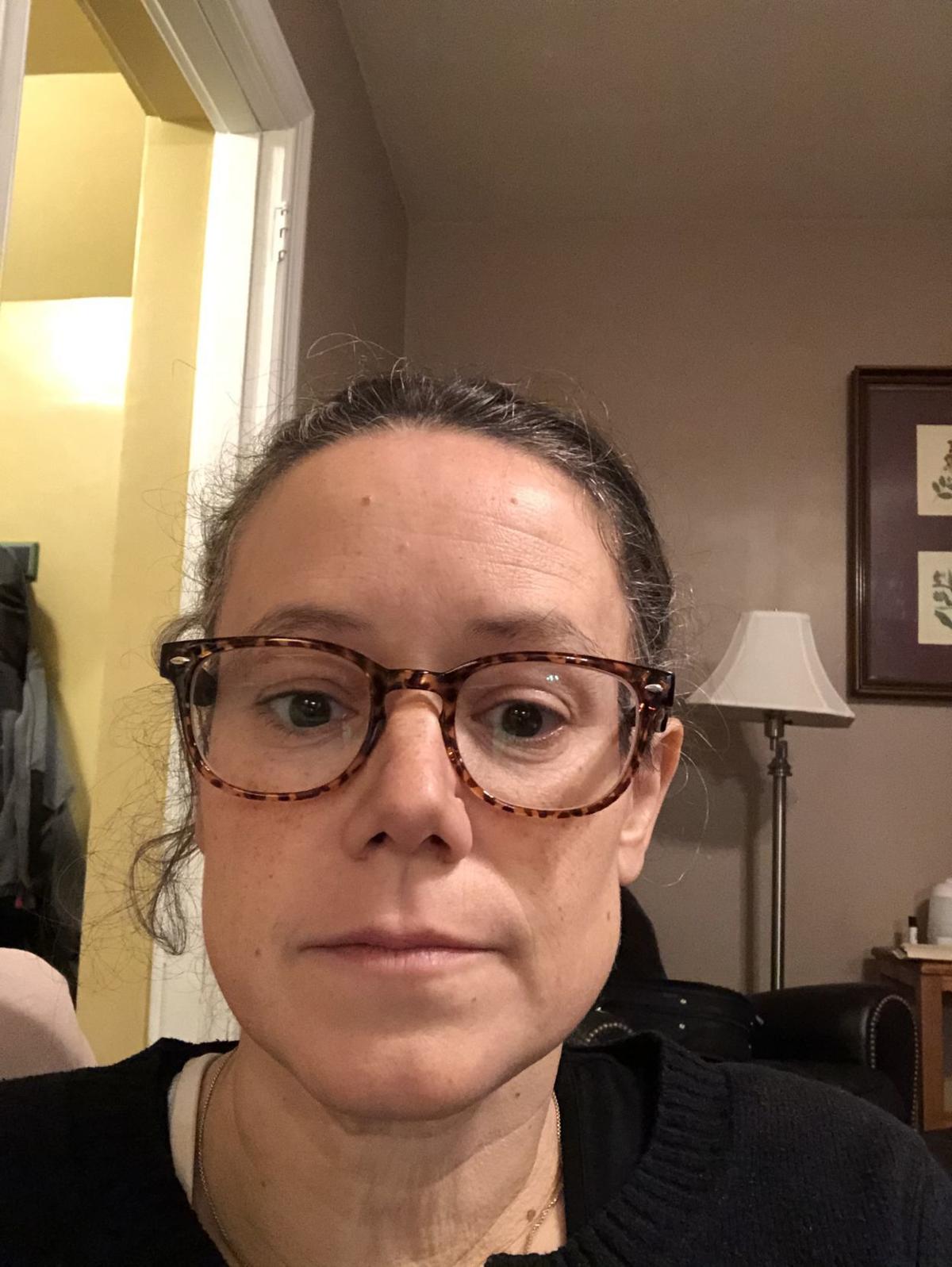 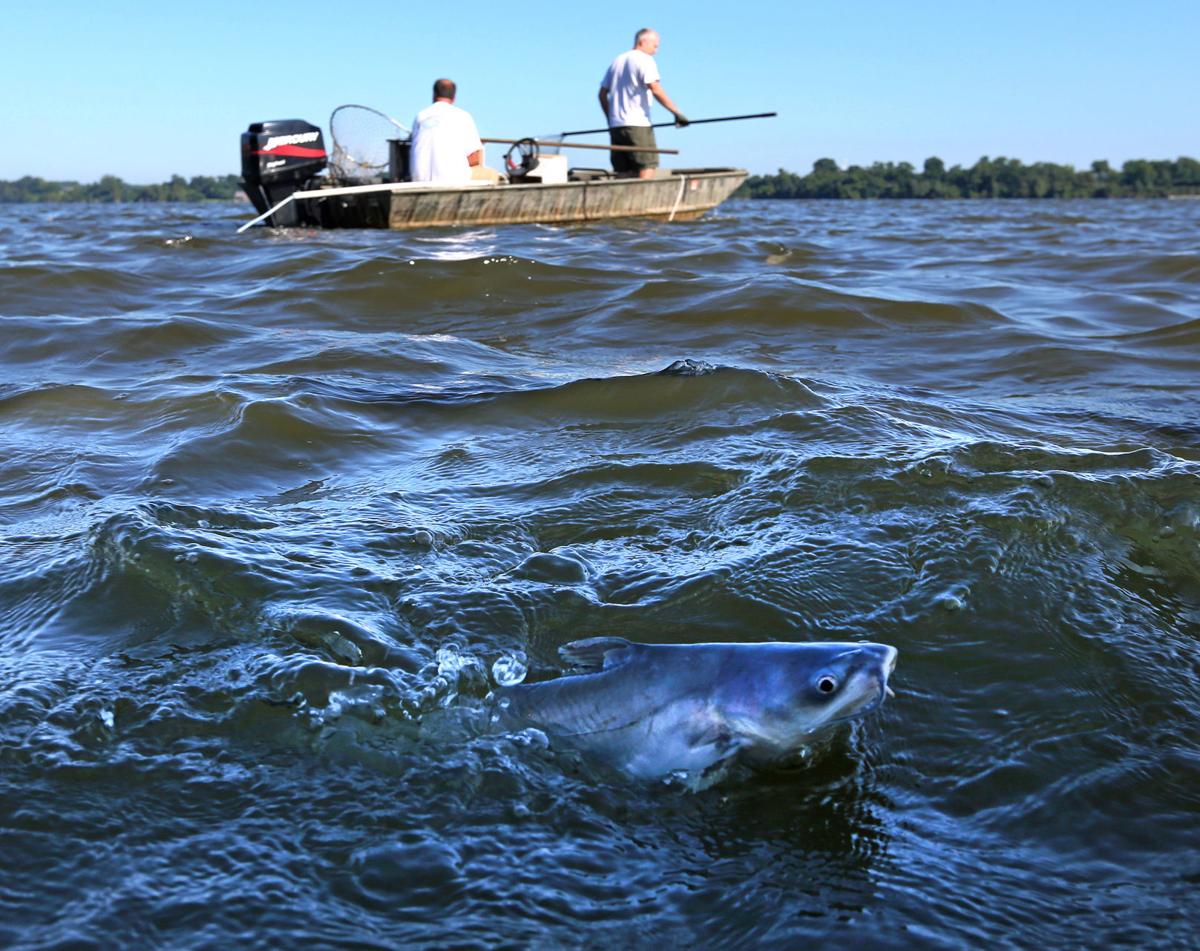 A blue catfish swam near an electro fishing boat on the James River near Westover Plantation in Charles City County. Two gas plants under development in the area would use vast amounts of water from the James, in an area already facing scarcity issues.

A blue catfish swam near an electro fishing boat on the James River near Westover Plantation in Charles City County. Two gas plants under development in the area would use vast amounts of water from the James, in an area already facing scarcity issues.

Two natural gas plants are under development for Charles City County, roughly 25 miles east of Richmond. Chickahominy Power Station, a merchant gas plant proposed by Balico LLC, and C4GT, developed by NOVI Energy, would collectively generate more than 2,500 megawatts (MW) of gas-generated electricity, making Charles City the fifth largest site of such power in the U.S. The electricity from both plants would be sold for investors’ profits into the PJM regional grid. While the first plant, C4GT, finalized all the required permits in 2018, the Virginia Department of Environmental Quality (DEQ) is just weeks from potentially completing the permits for Chickahominy Power. The comment period on a special exception to the Groundwater Management Act of 1992 will likely start Dec. 26.

Both gas plants are costly independent power projects, requiring an estimated $1.6 billion for Chickahominy and $1 billion for C4GT. While developers promise a significant return on these merchant power plants, there are questions about whether the plants would compete with renewables, especially when Virginia is poised to join the Regional Greenhouse Gas Initiative and Northam has promised to switch entirely to clean energy by 2050. Charles City residents rightly worry they’ll be stuck with two abandoned eyesores a decade from now.

They will certainly be stuck with environmental damage if the plants are built. Given clear evidence of the damage climate change will cause to coastal Virginia, it is shocking that two plants permitted to emit more than 10 million tons of carbon equivalent every year have received so little public attention — and so much support from Virginia’s regulatory system.

In addition to the catastrophic effects on climate, these plants would use vast amounts of water in an area that already faces water scarcity. The smaller plant, C4GT, would use 2.7 billion gallons of water annually from the James River, potentially stirring up sediment across the river from Hopewell, where Kepone was dumped in the 1960s and ‘70s. The larger plant, Chickahominy, still requires a “special exception” to the Groundwater Management Act to be able to extract 30 million gallons of groundwater annually from the Potomac Aquifer. These wells are sited only a couple of miles from an enormous landfill that has a history of leaching. Air quality is also a concern. The plants will be permitted to emit 349 tons of particulate matter and 297 tons of volatile organic compounds every year, along with sulfur dioxide, carbon monoxide, mercury, lead and formaldehyde, among other pollutants.

While the Charles City County Board of Supervisors quietly embraced the projects for their tax revenue, residents were kept almost entirely in the dark. When a dozen residents attended the Air Pollution Control Board hearing in June, they weren’t allowed to speak because they hadn’t participated in the previous public comment period. But there was almost no community outreach about the plants — a problem acknowledged but not remedied by the board. Since June, citizens have formed an advocacy group, the Concerned Citizens of Charles City County, to oppose the plants and demand transparency from Virginia’s regulators and their local government. Earlier this month, DEQ held a public information session in Charles City attempting to allay concerns. But residents of this majority minority county rightly view the plants as an environmental justice issue, pointing out that black and poor residents in particular will face this pollution and sacrifice their water for the benefits of outside fossil fuel investors.

Indeed, Virginia is treating residents of Charles City with the same disregard they showed to residents of Union Hill, the site proposed for the Buckingham Compressor Station. It is disappointing that in a “blue state,” Virginia officials from the governor and DEQ down to the local board of supervisors have been more interested in greasing the way for fossil fuel investment than in public health and sustainable environment. Concerned Virginians should contact DEQ to demand a more transparent and honest regulation of fossil fuel investment in our state.

Beth Kreydatus is a supporter of Concerned Citizens of Charles City County and a member of Mothers Out Front RVA, a group concerned about climate change. Contact her at: kreydatus01@gmail.com

In the interest of transparency - Beth should be up front RE the fact that IF we don't transport clean / plentiful and cheap natural gas via pipeline we'll have to transport it via truck / rail or barge. And IF we leave this wonderful natural resource in the ground and spike pipelines we'll have to import it from global competitors - at great cost to those consumers who are least able to afford it. That sounds environmentally unjust to me.

And while we're on the subject, who knew that the fossil fuel that affords Americans (minorities included) an unprecedented SOL is racist? We'll just add pipelines to everything else the left feels is prejudiced - secure borders / law enforcement / Voter ID / toxic white males / Republicans / education standards / housing / our founders / statues / etc etc ad nauseam. Anyone else sensing a pattern here?

Blah Blah Blah...SSDD.... from Eaton..Good thing the Dems won on November 5th and will move ahead even as he whines....

What did you expect from Eaton, he & Peters make a good pair "Lots of big words & lots of insulting words", oh yes ,"PERIOD"

I thought you had more sense than to hang around with Rambo, Marty... guess I overestimated you.

We need more reminders like that to warn us of developments that will harm our environment while not producing much lasting economic impact (Chickahominy power station will generate between 25 and 35 permanent jobs.) NOVI Energy is a firm that plans, builds, and then sells power plants. It has little interest in what happens to the communities which it uses, and has just as little concern for local or state environmental issues. As Beth Kreydatus points out this will be at best short term gain vs long term pain, a lot of long-term pain, at that..

Our energy future should clearly NOT be enmeshed in in fossil gas infrastructure, so why develop in that direction? We all should lobby Virginia’s regulatory agencies and let them know that we want more green energy and less fossil fuel based generation.

"Our energy future should clearly NOT be enmeshed in in fossil gas infrastructure, so why develop in that direction?"

A good question for Germany - who despite their insistence on zero emissions is building the mother of all pipelines under the Baltic Sea in order to import (BOO / HISS) natural gas from (BOO / HISS) Russia. Could it be because:

""Without imported gas and oil the German industrial machine and german society will grind to a screeching halt and their standard of living will drop like a rock."

Eaton, your steady and repetitive stream of ignorance never seems to surprise. Germany produces NO natural gas and no oil. To keep their industrial plant, which supports their standard of living, going they need to import both. Where else do they get it from, Dummy? Santa Claus? The natural gas fairy?

We, on the other hand are net exporters of gas and oil, thanks to mother nature. We don't need to import any and the only reason there are planned pipelines is to generate extra profits for the greed-heads at companies like Dominion, who are not satisfied from stealing from their captive users. The only reason why gas companies want to despoil our environment with gas pipelines across national forests and hundreds of streams and rivers is to export gas. Public risk for private gain. No thanks.

Your haughty words come back to haunt you

But since you brought it up - since we're nowhere near weaning ourselves from fossil / fissile fuels why should we eschew development in "that direction"? Also why shouldn't we export this clean and plentiful natural resource to nations that desperately need it to maintain their SOL's? Or are you of a mind that only Russia and other global competitors should enrich their economies by building pipelines (under the Baltic Sea no less) to deliver their product? There's also the rather jarring fact that your beloved Germany (the shining exemplar of renewable technology and zero emissions) is shamelessly putting the environment at risk on a massive scale by investing in this mother of all pipelines. IF they are proceeding so well on SO many fronts - why should this be necessary?

So many questions Poindexter - I'll wait patiently for your answers.

Eaton, my “haughty words?” Not haughty, just well informed (and often repeated by me).

And in somewhat simpletonian mode you ask why we should move in a renewable energy direction since we are “nowhere near weaning ourself” of fossil fuels? Let me see, duh duh, maybe because then we will reach our renewable goals faster. If you want to reach point X but are not there yet, then...duh, duh... you have to walk faster in the direction of point X. See, simple, just takes a bit of thought. Anything else I can explain for you? How to tie your shoes? How to put gas in your car? Just ask.