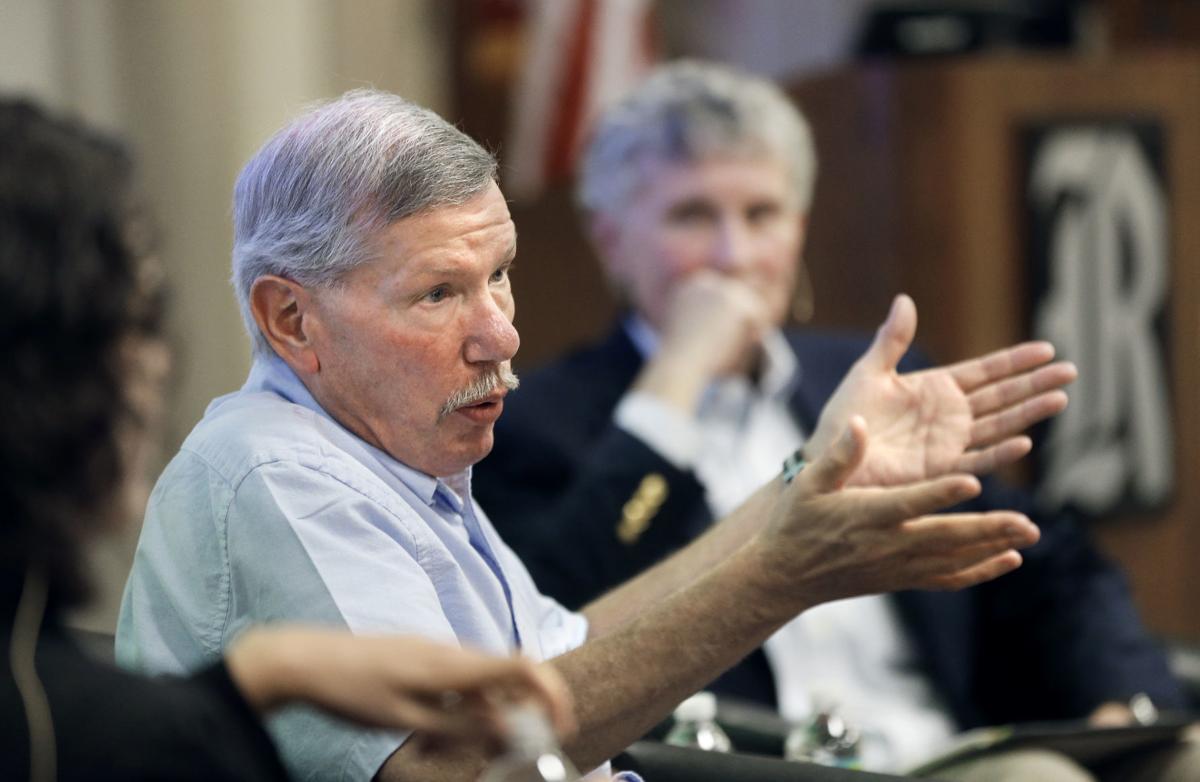 Keith Harward spoke during an RTD Public Square shortly after his release from prison in 2016. To Harward’s left is RTD reporter Frank Green, who covered his exoneration. 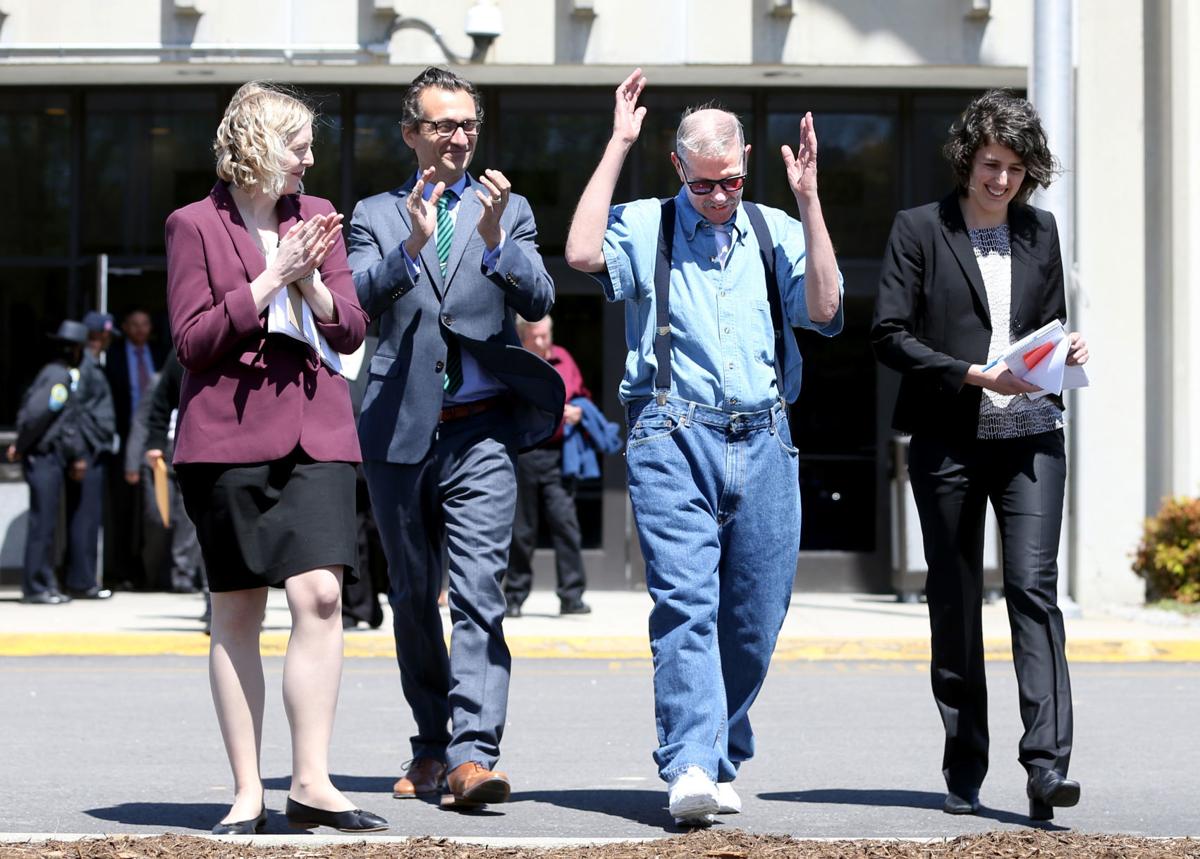 Keith Harward raised his hands after his release from the Nottoway Correctional Center on April 8, 2016. Accompanying him were (from left) Dana Delger, Chris Fabricant and Olga Akselrod of the Innocence Project. Harward was wrongly convicted of the 1982 slaying of a Newport News man and the rape of his wife. 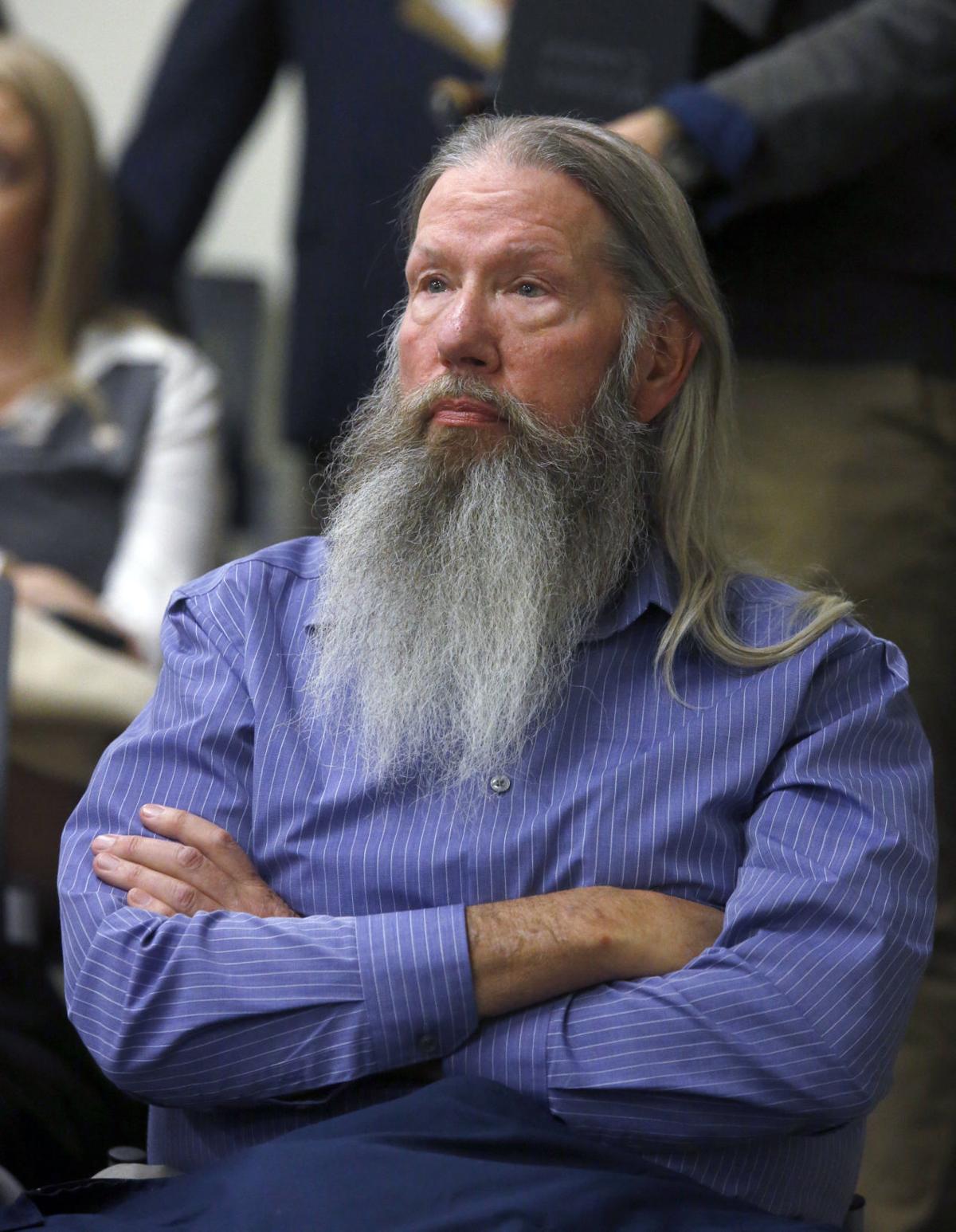 Keith Harward spoke during an RTD Public Square shortly after his release from prison in 2016. To Harward’s left is RTD reporter Frank Green, who covered his exoneration.

Keith Harward raised his hands after his release from the Nottoway Correctional Center on April 8, 2016. Accompanying him were (from left) Dana Delger, Chris Fabricant and Olga Akselrod of the Innocence Project. Harward was wrongly convicted of the 1982 slaying of a Newport News man and the rape of his wife.

In the early hours of Sept. 14, 1982, a man broke into a home in Newport News and beat 30-year-old Jesse Perron to death with a crowbar. Then, over several hours, the attacker sexually assaulted Perron’s 22-year-old wife, Teresa, leaving bite marks during the assault. Before the attacker fled, he took $14 from Teresa’s purse.

Evidence pointed toward a sailor who served on the U.S.S. Carl Vinson that was harbored nearby. At the time, I was one of 1,300 crew members on that ship.

Eight months later, after being discharged from the Navy, I became suspect No. 1 after an assault upon my girlfriend in which I bit her.

On March 6, 1986, a jury in Newport News convicted me of murder, robbery, burglary and rape. I was sentenced to life in prison.

The key evidence against me was a coerced witness identification and testimony by two forensic experts who said that I was the only person who could have left the bite mark on the rape victim.

In July 2015, the Innocence Project obtained a court order for DNA testing of the crime scene evidence. The DNA tests excluded me as the source of the biological evidence.

The investigation by the Innocence Project also discovered that the lab analyst who conducted the analysis of the blood and semen recovered in the case falsely testified that I could not be eliminated as the source of the evidence. The analyst’s bench notes of his testing actually excluded me. Those notes were never given to my defense attorney.

The DNA profile from the crime scene evidence was identified as that of Jerry L. Crotty, another sailor on the U.S.S. Carl Vinson at the time of these crimes. Crotty died in prison in Ohio in 2006, where he was sentenced for numerous crimes, including abduction and attempted burglary.

On April 7, 2016, the Virginia Supreme Court issued a writ of actual innocence, my convictions were dismissed and I was released after spending 33 years in prison.

If I had been sentenced to death back in 1986, the commonwealth would have executed me in the 1990s along with 65 other men. And no one would have ever known that I was innocent.

Virginia has executed 113 men since the U.S. Supreme Court allowed the death penalty to resume in 1976. Only one person, Earl Washington, has been exonerated after being sentenced to die in Virginia. However, some of those killed by the commonwealth went to the execution chamber claiming their innocence. Only God knows how many were in fact innocent.

Since 1976, there have been 166 people exonerated in the United States after being sentenced to death for crimes that they did not commit. In that same time period 1,510 have been executed. That is a ratio of one innocent person for every nine killed by the state. Most people will agree that is an unacceptable and intolerable error rate.

I am only one of 18 people in Virginia who have been exonerated after being wrongfully convicted of murder since 1989. Who knows how many others may still be behind bars for murders that they did not carry out. Our criminal justice system makes mistakes more often that we would like to admit.

It is time for the General Assembly to abolish capital punishment here in the commonwealth. The risk of executing an innocent person is simply too high.

Even though it took 33 years for me to walk out of prison, I am now free to eat what I want and go where I want. I can enjoy the company of family, friends and neighbors. I can appreciate the simple joys of camping and nature.

There is no way that we can undo the terrible mistake of executing an innocent person. That alone is reason enough for ending the practice of capital punishment.

I urge the Virginia General Assembly to abolish the death penalty during its 2020 legislative session.

In 2018 a total of 25 people were executed in America. Accepting the numbers offered by Mr. Harvard, two of them, perhaps three were not guilty. Whom do we hold responsible for these executions of innocents? What do we call them? Murder? And what does that make us, the citizenry who sanctions these penalties?

Does capital punishment work? If so, why does Texas, the state with the highest number of executions also rank so high in the states with the highest number of homicides? The death penalty is handed out in an arbitrary manner, it leads to the execution of innocent people, it obviously is not a meaningful deterrent, and it makes all of us complicit in the barbarity it represents. Time to abolish it.

Norbert Mayr - If the account presented by Mr. Harward is true, those who prosecuted his case did commit attempted murder. I don't know what, if anything was done about it but it was not lawful. That would be true whether it was a capital offense or not.

Steve, I am sure (or at least suspect) that happens more often than I care to know. But when it happens in a death penalty case it is much more awful and so terribly permanent.

Mr. Harward. Thank god your life was not terminated before your innocence could be proved. Perfect argument, indeed, for abolishing death penalty. As a deterrent to murder, it’s much less effective than good common sense national gun control laws.

"Coerced evidence (confession)" is what this is all about and why we MUST end the death penalty... In Texas, black men have been coerced into confessing to crimes they did not commit for decades... If you read Michelle Alexander's "The New Jim Crow, Mass Incarceration in the Age of Colorblindness" you find that Texas is not alone in coercion... Ya' see, once a man is locked up all he wants to to get out and prosecutors play all kinds of games on these men and lie to them and, wallah, CONFESSIONS!!! Then in Texas's case there is a review committee which has NEVER overturned a death sentence??? Then there is the Governor who in Texas has NEVER overturned a death sentence... Given the number of convicted men who have been exonerated over the last decade since DNA evidence is being reviewed and legal people have worked pro bono on death penalty cases the only logical conclusion is that prior to these developments that a boat load of innocent people have been MURDERED by the gvernment... Time to get over this VENGEFUL ABOMINABLE blood sport... ~~~ Bob

To take execution off the table would be to unilaterally declare that there are no violent crimes that warrant the ultimate penalty... I'm not prepared to make that pronouncement.

All juries can do is objectively assess the evidence / testimony given them - and the law specifically states "reasonable doubt"... not absolute certainty. The system is not perfect, but it's the best yet devised RE determining guilt or innocence.

I cannot imagine anything worse than being imprisoned for a crime that you didn't commit... but it happens all the time. Does that mean that we do away with the "trial by jury" precept? No discerning individual would say yes.

With the proven margin of error how can any rational human NOT call for a moratorium on executions since the ultimate penalty is totally irrevocable?

Oh. Wait... a Republican one who accepts unjustified termination of life, or any unjust incarceration apparently, as just a judicial “whooopsie”.

Drake Butler - If I understand Me. Harward correctly, his case wasn't a glitch in the legal system, it was a conspiracy that deprived him of a fair trial. I hope the perpetrators were dealt with as harshly as the law allows.

I’m sure those prosecutors just say they followed the evidence they had. Considering the irrevocable nature of the punishment, capital punishment should be banned based on the possibility for abuse resulting in such terminal consequences.

"I'm not prepared to make that pronouncement." This is of course your right. It's so good to be right.

It's even better to be snide / sanctimonious - I'll ask again Kenneth... are you prepared to state flatly that no crime warrants the death penalty?

What would Jesus do?