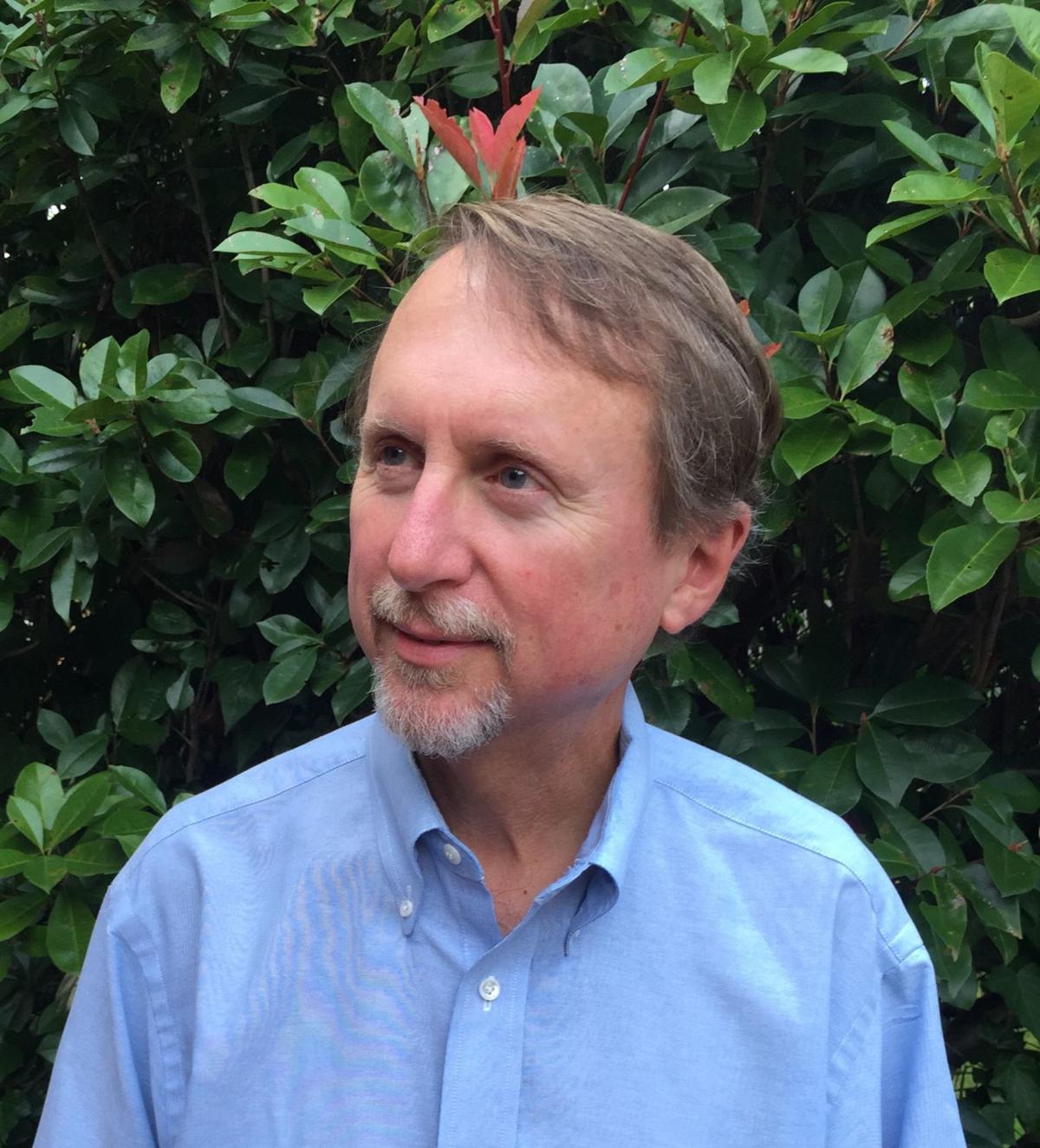 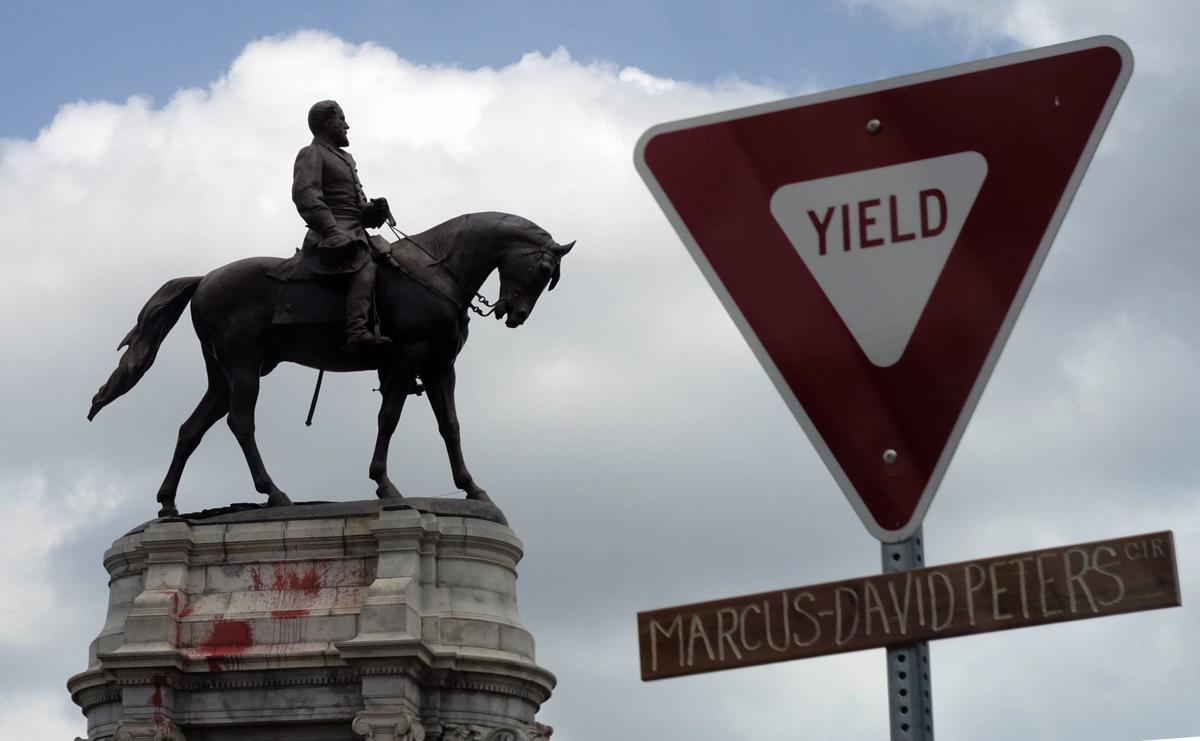 The graffiti-smeared statue of Robert E. Lee stood behind a traffic sign that had “Marcus-David Peters Cir.” handwritten over it. Peters was fatally shot by Richmond police in 2018 during a mental health episode.

The graffiti-smeared statue of Robert E. Lee stood behind a traffic sign that had “Marcus-David Peters Cir.” handwritten over it. Peters was fatally shot by Richmond police in 2018 during a mental health episode.

To those who persist in believing the statue of Confederate Gen. Robert E. Lee had nothing to do with slavery and only was about history, I say, OK, then, it was. This history:

Lee commanded the army that fought a war against the United States of America. If he had been successful, his victory would have perpetuated slavery.

That is historical fact and it applies to the statues of the other Confederate generals on Monument Avenue, or statues honoring the Confederacy in any other community. That is why protesters already have begun to topple them.

Beyond slavery, each of those statues represents America’s “Berlin Wall” of segregation that has separated African Americans, and other people of color, from equal justice and opportunity in every aspect of life.

How could the debate over the fate of such statues have lasted so long? Thank God Gov. Ralph Northam is going to take the statue down. Our “Berlin Wall” begins to fall.

I am a 63-year-old white man, a native Virginian who grew up in Richmond, attending public schools, and I suggest this possibility:

Transform the space that honored Lee into a “memorial of reconciliation” that calls us to embrace our shared humanity as children of God.

Some might say, “Enough symbolism.” I understand their point, but all symbols are not merely symbolic. There is great power in some of them. The statue of Lee proved that, as do burning crosses and swastikas. So, too, the Statue of Liberty and the Lincoln Memorial. The latter two are indelible moral markers.

Put an indelible moral marker in the place Lee once sat upon his horse. Let it spur us forward with persistent indefatigability to achieve equal justice. Let it inspire the young and renew the hopes of those who might have grown weary in the long journey to overcome the forces of racism.

There are many creatively artistic ways to express the message of reconciliation, but I offer a starting point: statues of men, women and children of all ages and ethnicities, joined hand-in-hand, stepping outward into the community.

This would be a memorial not to a single famous personage, but to ordinary people who have the courage to live a life with one another that declares, yes, we do hold these truths to be self-evident. All people really are created equal. And, yes, we all truly are endowed by our creator with certain unalienable rights.

Moreover, we are determined to reshape our community, our state and nation into one that lives those founding words as a universal truth rather than a cover for white supremacy.

We might even include those phrases from the Declaration of Independence as part of the memorial itself, but there they would be a declaration of our interdependence upon one another.

I am not naive. The fight is real.

My racial sensibilities were confirmed during the three years I spent in Richmond public schools in the 1970s during court-ordered busing to achieve desegregation. At Albert Hill Middle School and Thomas Jefferson High School, I was in the distinct racial minority. Those years re-enforced my belief that people are people and all skin is a pigment of God’s imagination.

Those sensibilities were called into action during the 36 years I spent as a journalist at The Farmville Herald in Prince Edward County, which closed its public schools for five years (1959-64) in Massive Resistance to integration.

I believe in muscular idealism. Faith and works. I know the labor can be backbreaking, but it always is worth it. I have seen what can be done when good-hearted people come together. In 2004, the General Assembly created what the late Julian Bond told me was the first civil rights-era reparation in U.S. history: the Brown vs. Board of Education Scholarship Program and Fund for the casualties of Massive Resistance.

In 2007, the General Assembly did something else. It apologized for slavery, as well as the exploitation of Native Americans. Those words should be part of a memorial of reconciliation, too. They aren’t naive, either.

“The most abject apology for past wrongs cannot right them; yet the spirit of true repentance on behalf of a government, and, through it, a people, can promote reconciliation and healing, and avert the repetition of past wrongs and the disregard of manifested injustices ...”

“(T)he General Assembly hereby acknowledge with profound regret the involuntary servitude of Africans and the exploitation of Native Americans, and call for reconciliation among all Virginians ...”

Those words have been out of sight and out of mind. We must change that.

I know some question the word “reconciliation” in a racial context because there has been racial segregation since the first slave ships arrived in Virginia in 1619. But I believe we come into this world as children of God, one family of humanity. It’s only after we are born that people divide us.

Furthermore, another meaning of “reconciliation” is to bring separate musical notes together into harmony.

We are those notes.

We can become an anthem of harmony if we lift every voice and sing.

And we must try. The Confederate statues are coming down, but huge sections of America’s “Berlin Wall” still exist.

Ken Woodley is author of “The Road to Healing: A Civil Rights Reparations Story in Prince Edward County, Virginia.” Contact him at: ken.woodley3@gmail.com

I’d be surprised if Richmonders will be able to come together anytime soon on what to spend money for new statuary. They can’t even provide the schools with enough funding.

If anything is put there it will come from groups of private citizens offering to fund new monuments and working through city council to use the land.

I liked the idea, submitted by one commenter to the RTD, of no more statues being placed on Monument Avenue and for the entire median strip, from Stuart Circle (which would need to be renamed) out to Horsepen in Henrico County become a huge garden dedicated to peace. Perhaps Ivy could be grown on the pedestals or some sort of flowering vines. It would probably attract tourists by the bus loads.

Why leave pointless pedestals to mar all that natural beauty?

In the coming months and years we will hear many suggestions on what to do with the newly vacated monument sites. I am sure that we will come up with some uplifting replacements. I do like this writer's ideas, and others will be welcome too. Let's hope this is a new beginning.

The other half or RECONCILIATION is TRUTH... We need to start with the TRUTH... For extra credit toward that goal let me ask this question: When was the last slave freed in America??? ~~~ Bob

As I understand it, June 19, 1865 in Texas when word finally reached them that the Confederacy had collapsed and that the slaves had been freed. Even so, incredibly the State of Mississippi (are you ready for this?) did not ratify the 13th Amendment until 1995 and did not submit the required documentation to the US Archivist until February of 2013! Here, read a news account about it (I am stunned): https://abcnews.go.com/blogs/headlines/2013/02/mississippi-officially-abolishes-slavery-ratifies-13th-amendment