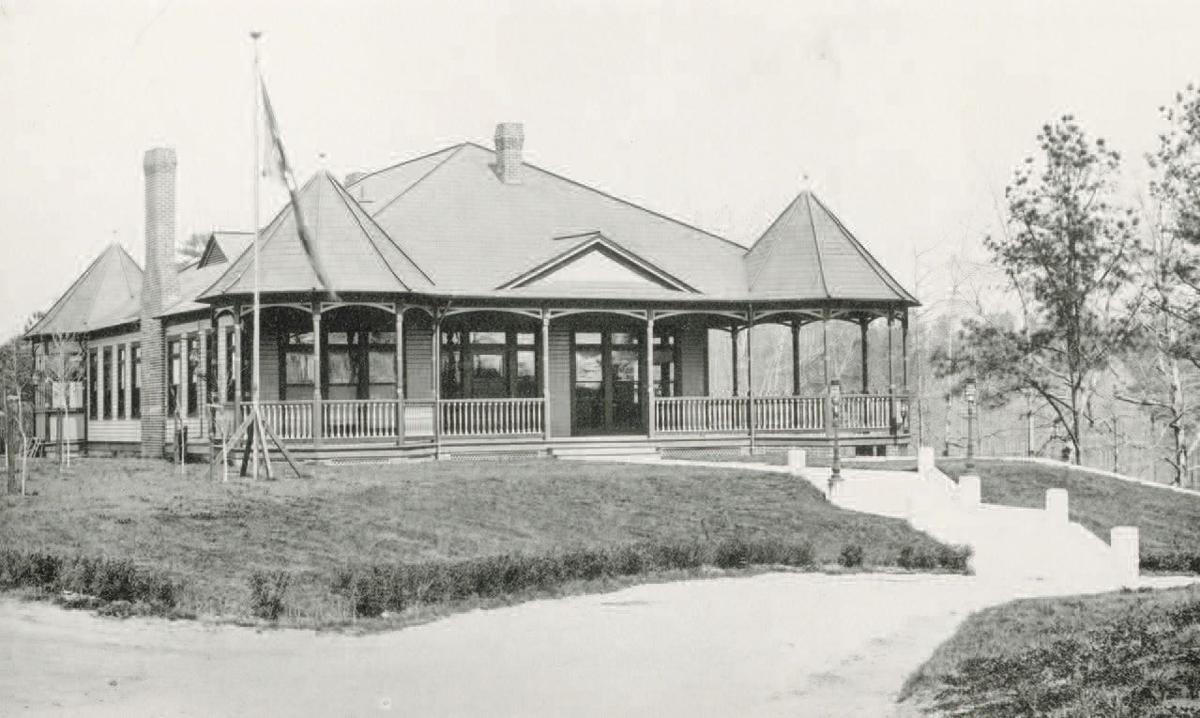 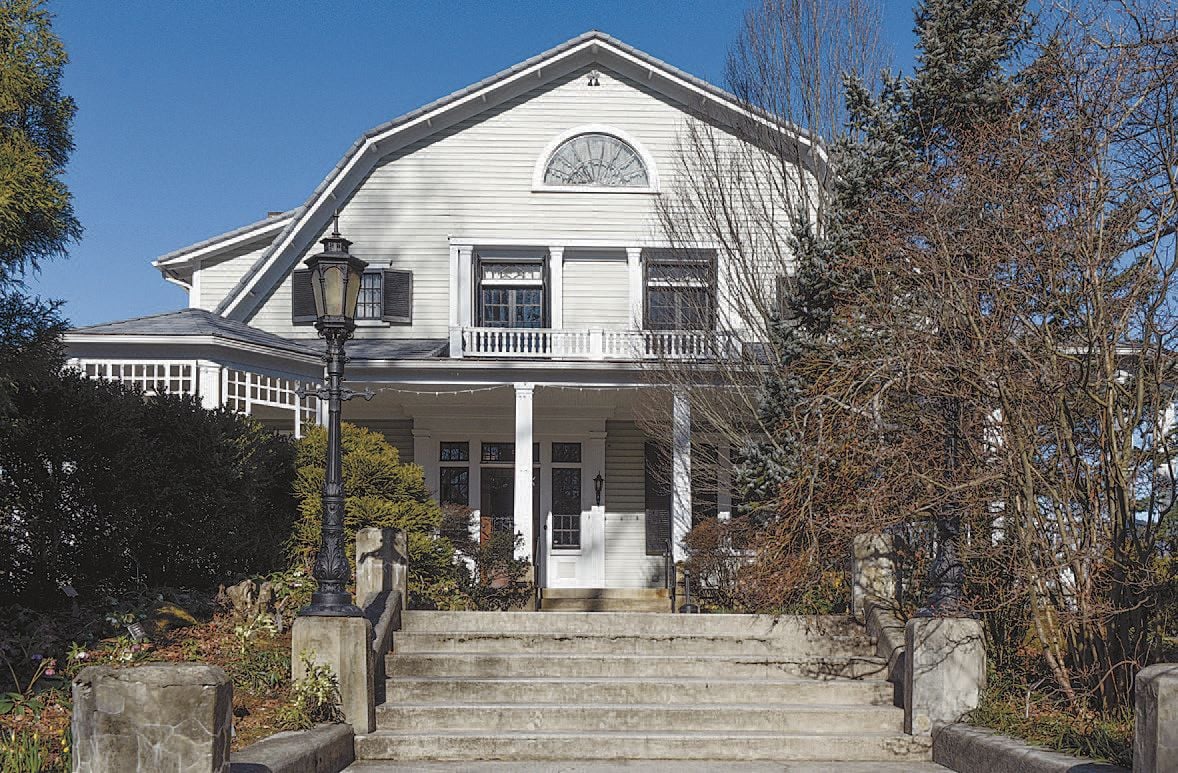 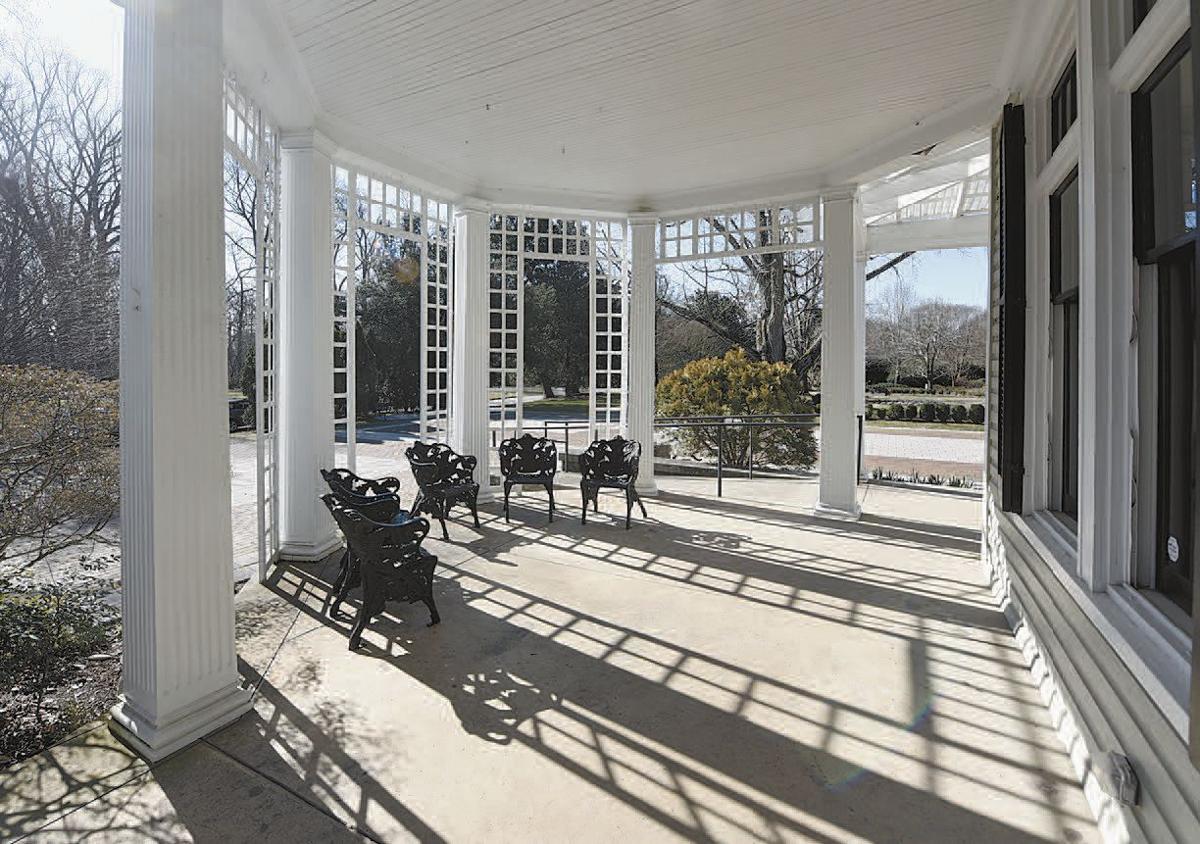 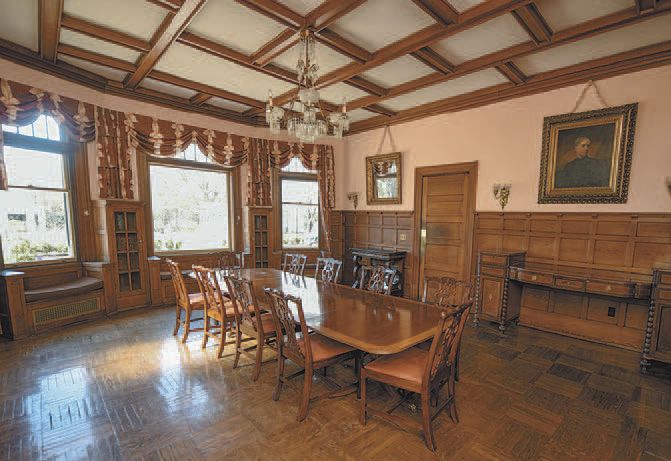 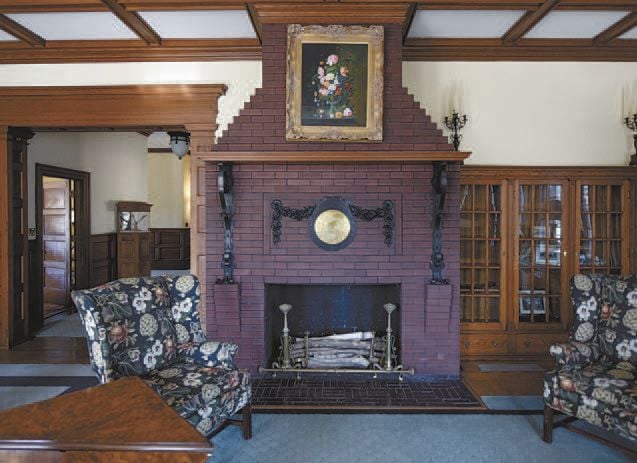 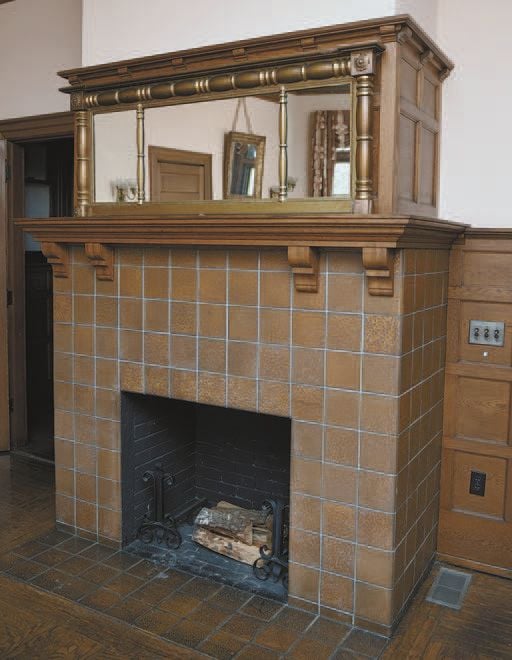 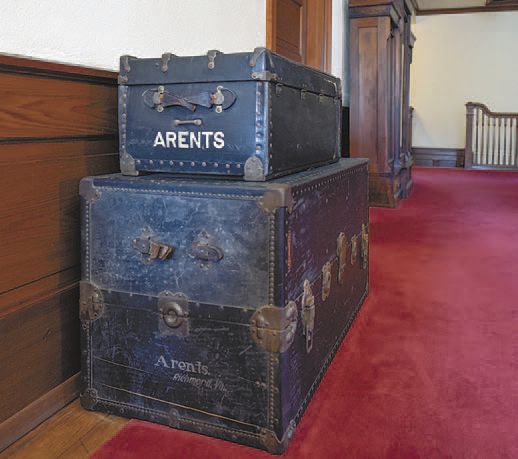 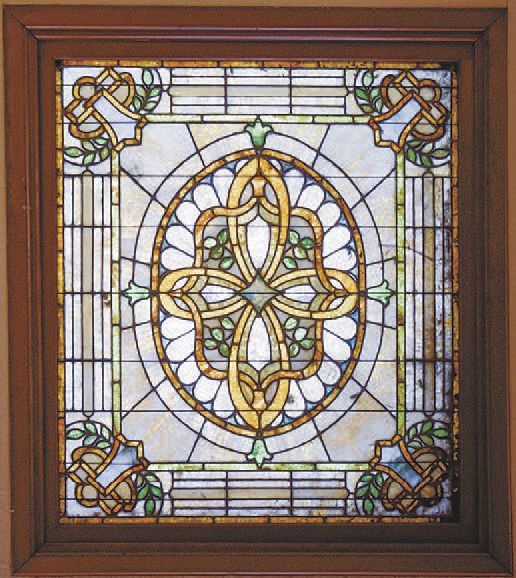 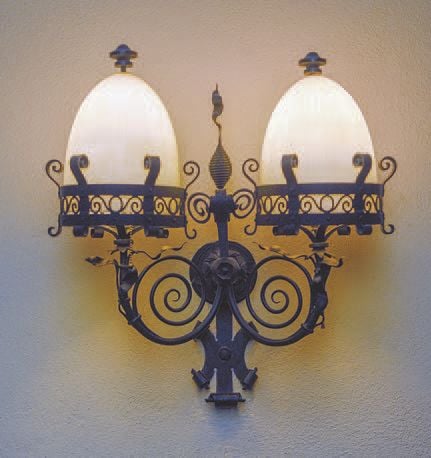 Houses sometimes have surprising histories, but the Bloemendaal House in Lewis Ginter Botanical Garden is especially striking. Built in 1895 by Lewis Ginter, one of the South’s richest businessmen, it was originally a clubhouse for cycling enthusiasts. It didn’t become a private residence until 1917. And even then, the story is a little more complicated than you might think.

In the late 1880s, Richmond began a massive residential expansion fueled by the spread of electric streetcar lines. Previously, horsecars had carried residents around the city, but electric streetcars provided a reliable way to do something novel: live in the distant suburbs and commute to work.

The streetcars didn’t just spark suburban residential construction. Often,  streetcar companies built amenity-filled parks at the end of their lines to attract more riders. Forest Hill Park in South Richmond offered visitors the chance to ride a rollercoaster, for example. And the Westhampton Amusement Park (now the site of the University of Richmond) in the city’s West End had a shooting gallery and a dancing pavilion.

Ginter, who had made his fortune in tobacco, began buying large tracts of land in northern Henrico County in the late 1880s with an eye to suburban development. And like other developers, he built attractions to draw visitors to the suburbs.

Ginter’s Lakeside Park (located at the site of the present-day Jefferson Lakeside Country Club), offered visitors the opportunity to play golf, bowl and observe animals in the park’s zoo. And the adjacent clubhouse for Ginter’s Lakeside Wheel Club gave bicyclists a place to relax, as well as dine.

Ginter bought the land for Lakeside Park in 1891, and it opened to the public in 1896. He bought the 9-acre parcel for the wheel club in 1894, and it opened the following year, said Janet Woody, a retired garden librarian for Lewis Ginter Botanical Garden.

“The Lakeside Wheel Club was intended as a gathering place for Richmond’s well-to-do recreational bicyclists when the city was in the throes of bicycle fever,” said Dory Klein, librarian for Lewis Ginter Botanical Garden.

The one-story clubhouse, which was the wheel club’s centerpiece, faced Lakeside Avenue, and cyclists could walk up a concrete walkway from the street and store their bikes under the clubhouse, said Roland Clements, a volunteer guide who has given tours of Lewis Ginter Botanical Garden for 24 years.

The clubhouse featured Queen Anne-style porches, which incorporated a pair of octagonal gazebos onto the front two corners of the building. Photos indicate the back two corners had gazebos as well.

“The Queen Anne style was associated with leisure and recreation, and it became the most popular style for resort hotels and vacation cottages in the 1880s and 1890s,” said Chris Novelli, an architectural historian with the Virginia Department of Historic Resources. “With its porches, the clubhouse’s design is what you’d expect of a place built for outdoor recreation. The corner gazebos, with their pointed roofs, gave it a slightly fanciful touch.”

The bicycling craze proved short-lived, and the club only operated for a few years.

“Upon Ginter’s death in 1897, the property reverted to his estate,” said Beth Monroe, public relations and marketing director for Lewis Ginter Botanical Garden.

The sanatorium and private residence years

The clubhouse sat unused until 1911, when Ginter’s niece, Grace Evelyn Arents, bought the property from his estate.

Arents was a philanthropist with a long history of supporting working-class communities, particularly in the city’s Oregon Hill neighborhood.  Among her projects were funding the construction of Oregon Hill’s St. Andrews Church Complex, opening the Grace Arents Free Library (also in Oregon Hill) and establishing the city’s first playground at Clark Springs.

Arents likewise had philanthropic plans for the former clubhouse.

She remodeled the building, added a second floor and converted the building into a convalescent home for Richmond’s sick children, Monroe said.  She also began purchasing adjacent parcels of land, and eventually the property grew to approximately 73 acres in her lifetime.

Inside, Arents added a large staircase leading to the new second story, with a stained-glass skylight above it. She also added or modified several fireplaces that have a distinctly Arts and Crafts vibe with their muted tiles and massive presence.

Outside, the changes were more dramatic. Most prominently, the new second story features a striking, front-gambrel roof in the Dutch Colonial style, which was popular in the 1910s.

However, the building also displays a few eclectic details. It still has vestigial Queen Anne elements, such as the turned posts on the enclosed porches. And the extended eaves reflect the Craftsman style that was growing in popularity.

The Lakeside Sanatorium for Babies opened in 1912 and operated for approximately two years, Woody said.

In 1917, the building underwent a third change, when Arents moved into the building and named it Bloemendaal. The name, Dutch for “Valley of Flowers,” acknowledged Arents and Ginter’s Dutch ancestry, as well as Arents’s love of gardening.

Arents lived in Bloemendaal, along with her companion, Mary Garland Smith, until Arents’s death at the age of 78 in 1926.

In Arents’s will, she gave Smith life-rights to Bloemendaal, with the stipulation that it become a botanical garden named in honor of her uncle, Lewis Ginter, after Smith’s death. Smith continued to live on the property until her death at the age of 100 in 1968. (At least one account suggests she might have been 103.)

Plans for establishing a garden at Bloemendaal lagged. For a period of time, the city used the property as a tree nursery and grew plants for its parks there. Finally, in 1987 – five years after a court battle to decide how to use the endowment Arents had established for the garden – Lewis Ginter Garden opened to the public on a daily basis. With land purchases funded by Arents’s trust, the garden grew to approximately 80 acres by the early 1990s.

And the Bloemendaal House, which for a time served as the garden’s admissions center, still looks largely the way it did in Arents’s years there.

“The deep wood tones of the oak paneling and ceiling beams, together with the stained glass, give the house a palpable turn-of-the-century feel,” Novelli said. “It’s a testament to the high regard later generations had for her that the house is preserved almost exactly as she left it.”

Today, the house is occasionally open for tours, including on May 17 during National Public Gardens Week. And it’s available to rent for special events year-round.

If your home is architecturally significant and merits coverage let us know. Send an Email to: GreatHomes@timesdispatch.com.