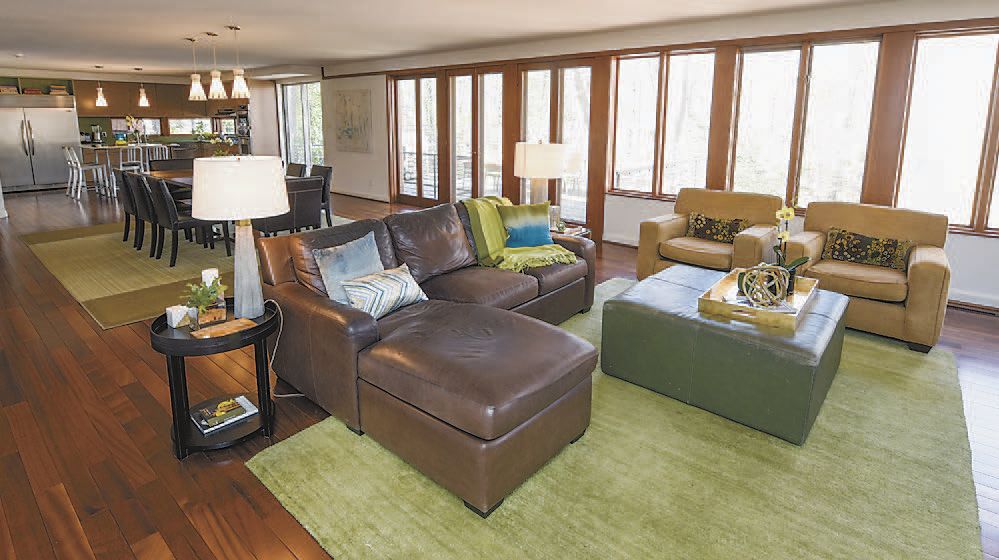 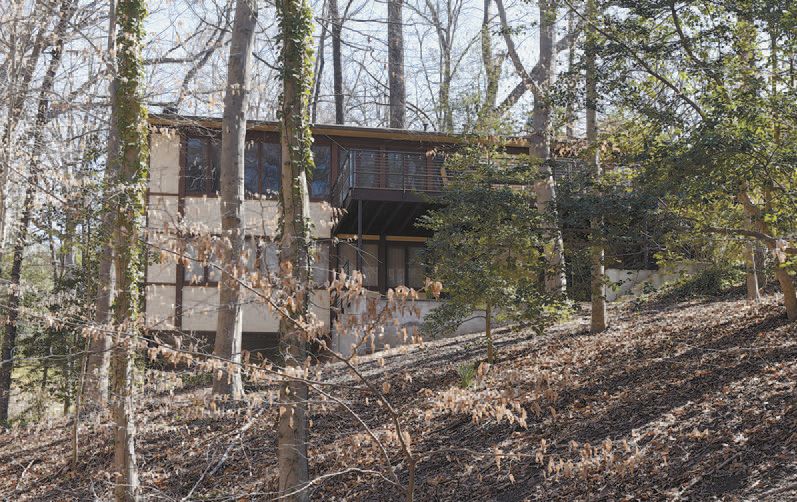 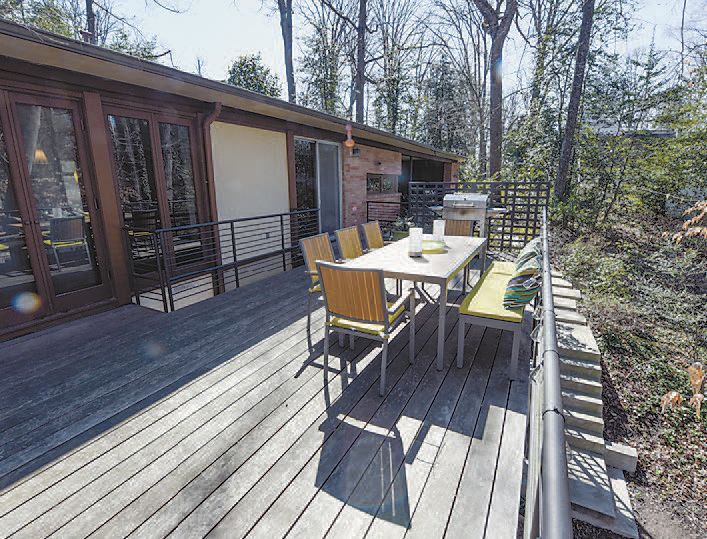 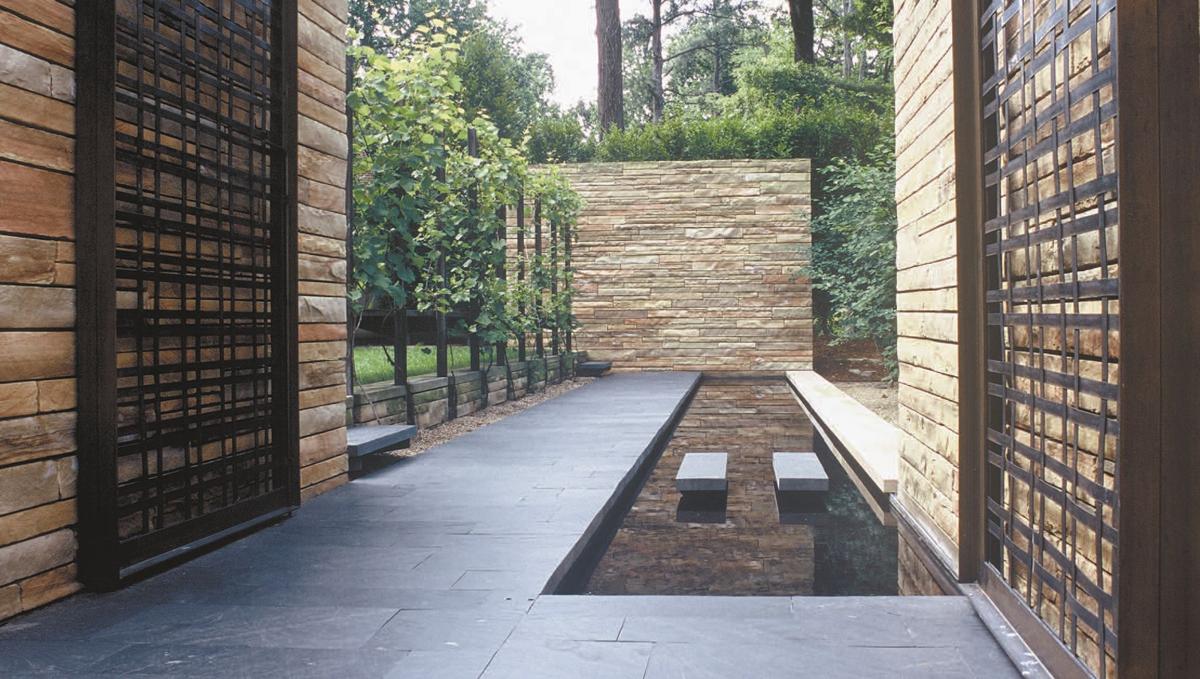 This garden will be featured on a tour.

This garden will be featured on a tour.

Frederick “Bud” Hyland wasn’t Richmond’s first architect to design homes in the Modern style. George Edward Hoppe, a local businessman, designed homes and an apartment building in the International Style in the 1930s – almost certainly the city’s first foray into Modernism. Nor was Hyland the only architect producing Midcentury Modern homes. Other architects, such as University of Virginia-trained Alan McCullough, designed homes in the style, as well.

But Hyland, an Illinois native who served an apprenticeship with Frank Lloyd Wright in the 1930s, stands out among his peers in an important way. At a time when the Colonial Revival style dominated the city’s residential architecture, he remained steadfast in designing exclusively in the Modern style. “Bud was a pure Modernist,” said Joseph “Jody” Lahendro, a historic preservation architect at the University of Virginia. “He didn’t do Colonial. Most of the other architects did.”

In recognition of his dedication to the Modern aesthetic, Modern Richmond, a nonprofit organization that organizes tours of Modern-style residential and commercial buildings, will make Hyland and his work a central focus of its third annual Modern Richmond Week.

The week-long series of events will begin on Sept. 16 with a lecture delivered by Lahendro, who lived in Hyland’s South Richmond neighborhood and eventually bought the home that Hyland designed for himself and his wife, Ruth Hyland, in 1949. “I had a family of four, so I added onto it,” Lahendro said. “I got Bud’s approval of my proposed designs, and he was an adviser to me on it.”

Lahendro’s lecture will cover Wright’s influence on Hyland, as well as Hyland’s interaction with his peers. Lahendro will also discuss several of Hyland’s homes in detail.

Temperamentally, Wright and Hyland were opposites.

“Bud was modest, soft-spoken and very humble,” Lahendro said. “Even though he was from Illinois, I think of him as a Southern gentleman.”

“Humble” and “modest” aren’t words that get attached to Wright’s name often. Nonetheless, the two men advocated for a similar approach to architecture and modern living.

“Bud was an unapologetic follower of Wright, and he stayed in touch with him for all of Wright’s life,” Lahendro said. “He felt that Wright’s style was correct for modern, postwar living. It brought families together in smaller, open-plan houses and joined the outside with the inside” through the use of expansive windows.

The house, located in the Hillcrest neighborhood south of Cary Street Road, is sited dramatically on a steep, heavily wooded hillside – a common feature in Hyland’s residential work.

“He loved the dramatic differences from the front of the house to the back,” Lahendro said.

To take advantage of the expansive views, Hyland placed the public spaces and the main entry for the house on the second floor, and he tucked the four bedrooms on the floor below – another recurring feature in his homes.

The current homeowners, William and Kristi Lane, have undertaken remodeling projects, including installing a fireplace in the living room and removing a wall separating the kitchen and the living room.

“In any renovation we undertake, we are respectful of Bud’s work and always try to keep his original intentions in mind,” said Kristi Lane, a managing principal at 3north, an architectural firm based in Manchester. “That said, houses are living, breathing and evolving places that don’t need to be stuck in time. And when you adapt a house designed by someone who knew what he was doing, you can translate the intention to fit the lifestyles of today.”

The house tour will take place on Sept. 17.

On the following night, Modern Richmond will offer a tour of a medical office building Hyland designed in 1955 for Elmer Bear and Arthur Klein. (Hyland also designed a house for Klein in 1950 – his first large commission.) Located at 2016 Monument Avenue, the building is one of seven commercial projects he undertook in Richmond.

“We thought it was important to show that Hyland did commercial work,” said David Bass, a board member of Modern Richmond.

Other events for Modern Richmond Week will include a garden tour, a two-day market and a panel discussion about Modern architecture and product design.

“The decorative arts are something we’re trying to explore more, and this panel will be exciting,” Bass said.

Modern Richmond Week will end with a wrap party at Aloi in Scott’s Addition on Sept. 22.

Modern Richmond’s tours routinely sell out, and the organization is anticipating strong crowds for Modern Richmond Week, thanks in part to Hyland’s prominence.

“Bud would be pleased that the things he believed in were being accepted and admired, but not so much for the attention as that it validated his beliefs about casual, Modern living that centered on the family,” Lahendro said.

If your home merits coverage in a Homes story, let us know. If your home meets our criteria, we’ll contact you. Send an Email to: GreatHomes@timesdispatch.com.