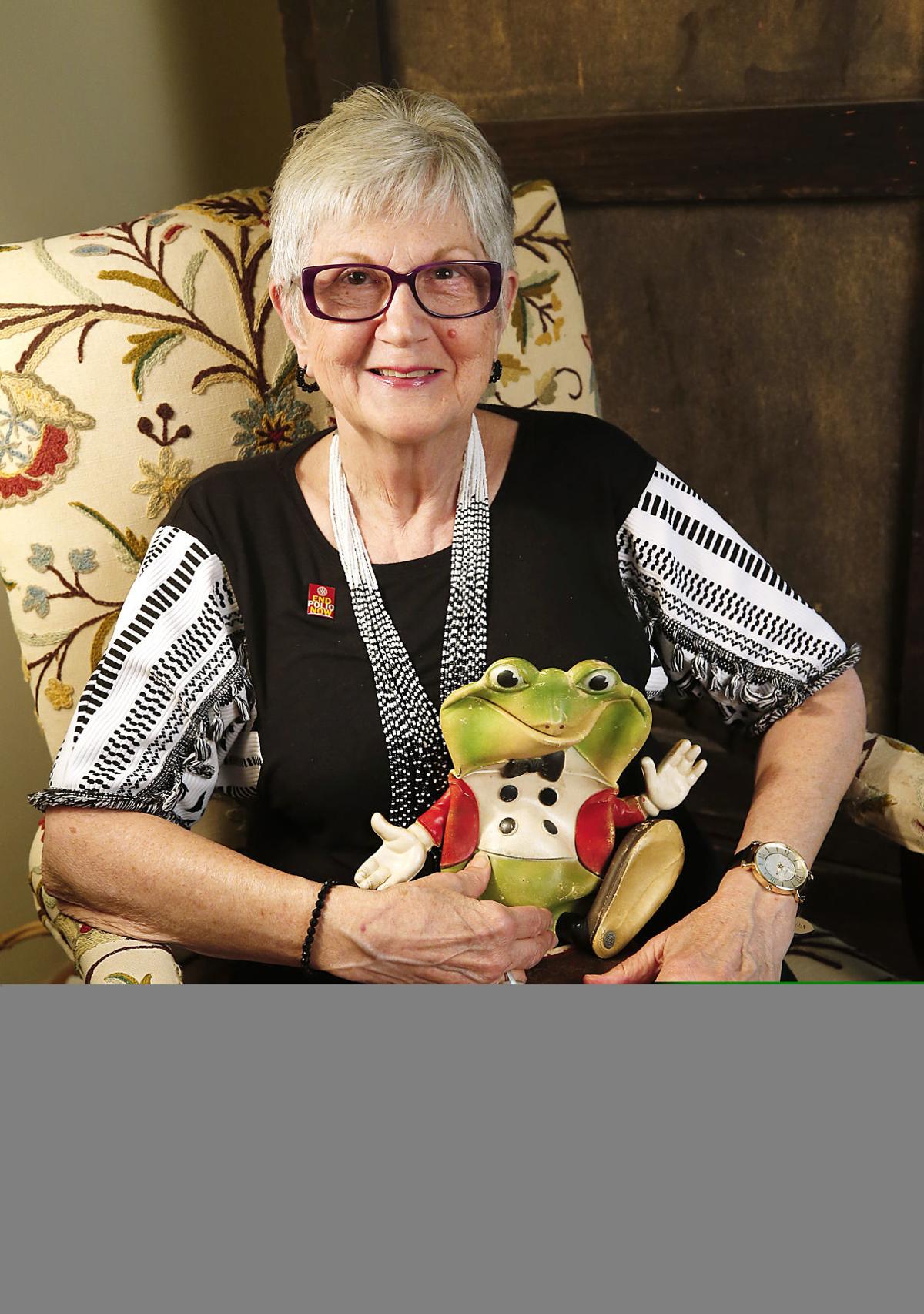 Nancy Beasley, 72, an author and Rotary International member, is a polio survivor. She holds the book of Bible stories her mother read read to her and the toy frog her father gave her while she was recuperating. Beasley helps raise money through Rotary International's effort to eradicate the disease worldwide. Photo was taken on Thursday, June 14, 2018. 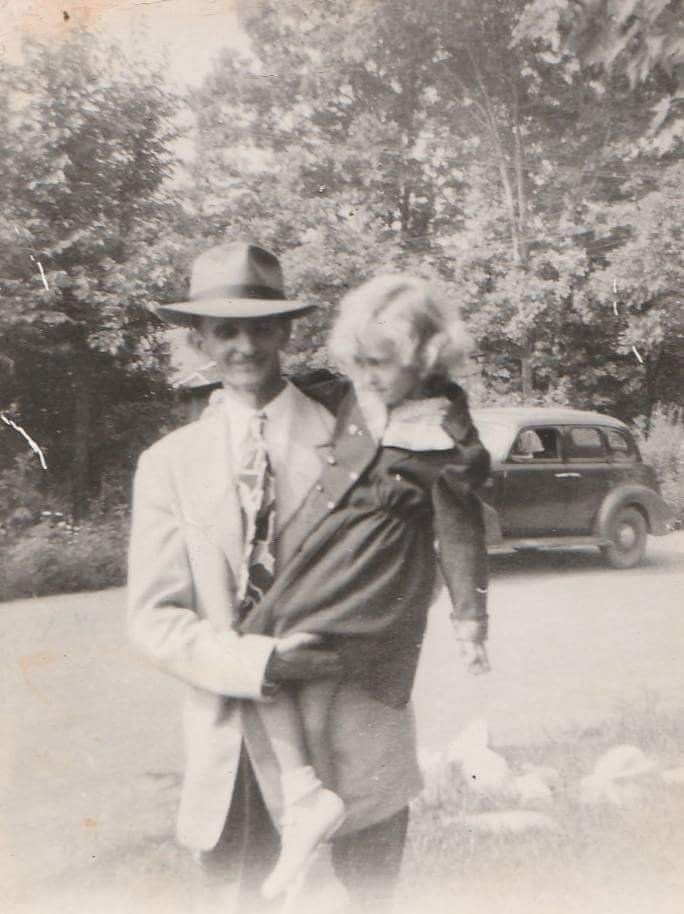 Elmer Legg carried his daughter Carolyn home from the hospital in Charleston, W.Va., after her stay for polio in the late 1940s. Carolyn’s twin sister, Marilyn Legg Winn, now lives in Henrico County.

Nancy Beasley, 72, an author and Rotary International member, is a polio survivor. She holds the book of Bible stories her mother read read to her and the toy frog her father gave her while she was recuperating. Beasley helps raise money through Rotary International's effort to eradicate the disease worldwide. Photo was taken on Thursday, June 14, 2018.

Elmer Legg carried his daughter Carolyn home from the hospital in Charleston, W.Va., after her stay for polio in the late 1940s. Carolyn’s twin sister, Marilyn Legg Winn, now lives in Henrico County.

Less than a century ago, polio was one of the most feared diseases in the United States, paralyzing and killing young people and leaving parents too afraid to let their children go outside.

For Americans of a certain age, recollections of that era came flooding back as news of quarantines and self-isolations in connection to COVID-19 hit close to home.

For some, it was much more than a mere memory. It was a scary time.

“It was,” said Marilyn Winn, 77, who grew up in Charleston, W.Va., and lives in Henrico County. “But I knew my sissie was there, and if she didn’t cry I wouldn’t cry. I don’t ever remember crying.”

Winn and her twin sister, Carolyn, contracted polio the year they turned 4. They were hospitalized — away from their parents and away from each other — for a couple of weeks and then spent even more weeks in isolation at a sanitarium.

A doctor came to their home — back in the days of house calls — and then their father bundled them up and drove them in the family car to a local hospital. A half-dozen other kids from their neighborhood also contracted polio.

In the late 1940s, polio outbreaks in the U.S. crippled an average of 35,000 people each year, according to the U.S. Centers for Disease Control and Prevention. Public health officials imposed quarantines on households and towns where people may have been exposed to the highly contagious viral disease, which had no prevention and no cure.

Typical symptoms included fever, fatigue and stiffness of the neck and pain in the limbs. In the worst cases, paralysis set in, and in a small portion of those the paralysis immobilized breathing muscles and led to death.

Now, of course, polio is prevented by vaccine, though there is still no cure for the disease. No new cases of polio have originated in the United States since 1979. Worldwide, cases have dropped from an estimated 350,000 in 1988 to about 30 in 2018. The virus has been eradicated worldwide, except in Afghanistan and Pakistan.

In the years before the vaccine was discovered in the mid-1950s, sporadic outbreaks of the virus seemed to peak in summertime, which led to the closing of places such as public pools because of the threat of contamination. The virus is transmitted person-to-person, mainly through infected feces in contaminated water.

Winn said she and her sister used to play in a creek near their home, which is how they might have contracted the virus.

She and her sister lost weight and their muscles atrophied, but they survived. It took about a year before they returned to being the active little girls they had been. Her older brother has reminded her of the sign posted on the family’s front door, alerting outsiders the household had been quarantined.

“Everybody knew that you didn’t go to our house,” she said. “My brother says he thought he was being punished by being in the quarantine because he would sit in the yard and watch all the other kids play.”

She had never told her out-of-town granddaughters about her polio experience until the other night, as they are becoming familiar with the notion of pandemics as the COVID-19 outbreak has left them house-bound and home-schooled in South Carolina. They were enthralled.

Lois Meuschke was 10 years old when she contracted polio in the late 1930s from a young cousin she was babysitting.

“I was in bed for six months,” said Meuschke, now 91, who grew up in Buffalo, N.Y., and has lived in the Richmond area for much of her adult life. “I could not walk. My legs were killed. They were very painful.”

She remained in isolation for a long period — an experience that prepared her for another stretch of separation from the outside world: when she was almost 16, she was quarantined for about three months after coming down with scarlet fever, a bacterial illness that features a high fever, sore throat and bright red rash that could lead to peeling skin. Her case was so extensive, she said, that the skin on the soles of her feet peeled off.

“Quarantine makes you acceptant of being alone, of finding other things to do,” she said. “One of those is reading, which is fortunate that I developed a love for reading.”

She vividly remembers her 16th birthday. She was emerging from quarantine, and the neighbor next door, who operated a bakery, brought her a birthday cake.

“My first store-bought birthday cake,” she said with a laugh. “That was a very good birthday.”

Nancy Wright Beasley had just put some homemade cookies in the mailbox for her letter carrier when she answered the phone. She’s calling them “Cuomo Cookies” because she has found New York Gov. Andrew Cuomo to have been “the calmest and most authoritative voice” she’s heard in recent weeks, and at the end of his press briefings he’s asked everyone to be kind to one another.

“We need to help each other,” she said.

So, she has delivered oatmeal and chocolate chip cookies to a pharmacy, a fire station and a grocery store — as well as to friends who are doing good work in the community.

“I’m not visiting people,” she said. “I’m just leaving it at the door.”

Beasley’s bout with polio as a child brings out deeply emotional feelings about epidemics and quarantines as she knows about such things firsthand.

“Things are so much better today, even though this is horrible,” she said of the COVID-19 outbreak. “The world is much more connected today. When I was carried into the hospital ward by a doctor, I looked over his shoulder and I could see my parents getting smaller and smaller. I don’t even remember if I cried. I was so lethargic. I don’t even know how long it was. Weeks and weeks and weeks. I didn’t talk to [my parents]. There was no radio, no television, no telephones.”

It was the early 1950s, and Beasley, a local writer, was not quite 7 years old when she was taken from her family’s farm outside Christiansburg to a spartan room at Memorial and Crippled Children’s Hospital in Roanoke.

“I was in an isolation room, and it was extremely painful for me. I’d never been away from home once. We were a close family. I have a 7-year-old granddaughter, and I can’t imagine what it would be like to have her taken away from everything she knows in the world and put in a room by herself. I’m almost 75, and I can cry just thinking about that.”

Her most poignant memory from her hospital stay: the first time she saw her parents. They and other parents were sitting on the other side of a glass wall, waiting to see their ailing children.

“The kids were lined up,” she said. “I was in a wheelchair. There were some on gurneys. We could talk to our parents by phone, but we couldn’t touch them. My mother put her hand on the glass … ”

Beasley began to cry. “I hadn’t thought about that in a long time.”

After her hospitalization, Beasley spent more than six months lying in her hospital bed. Her mother would lift Beasley into a galvanized tub filled with hot water and vigorously massage and exercise her so the muscles wouldn’t atrophy. It was a daily ritual that was painful at the time, but Beasley said she knows it’s why she eventually was able to get back on her feet again.

“My mother was so courageous,” she said.

Beasley, who lives in Chesterfield County, has become involved in Rotary International’s PolioPlus campaign, which has helped immunize more than 2.5 billion children against polio and in the process helped rid the world of the disease. She has raised money for the campaign and speaks to whomever will listen about the importance of not letting polio gain a foothold again .

She sees ominous parallels between polio and COVID-19, and said, “People have no clue what this virus can do to this society if it’s not tamed.”

“The magnitude of loss and sickness could happen again through COVID-19,” she said.

I contracted polio in 1952 when I was 6... I don't recall being quarantined but I did spend 6 months in Crippled Children's Hospital and wore a brace for about a year afterwards... Fortunately I survived well..., ~~~ Bob

I also contracted polio i 1952 at the age of 12 and I was quarantined at MVC for about 2 weeks connected to an IV. I spent the next 3 months at MCV learning how to walk again. I have had a full life, traveling the world and every once in a while the post polio syndrome will bite me when I attempt to go beyond my physical abilities because of polio. While at MCV,, my large room had two iron lungs and several rocking beds in use. Fortunately, I slept in a regular bed.