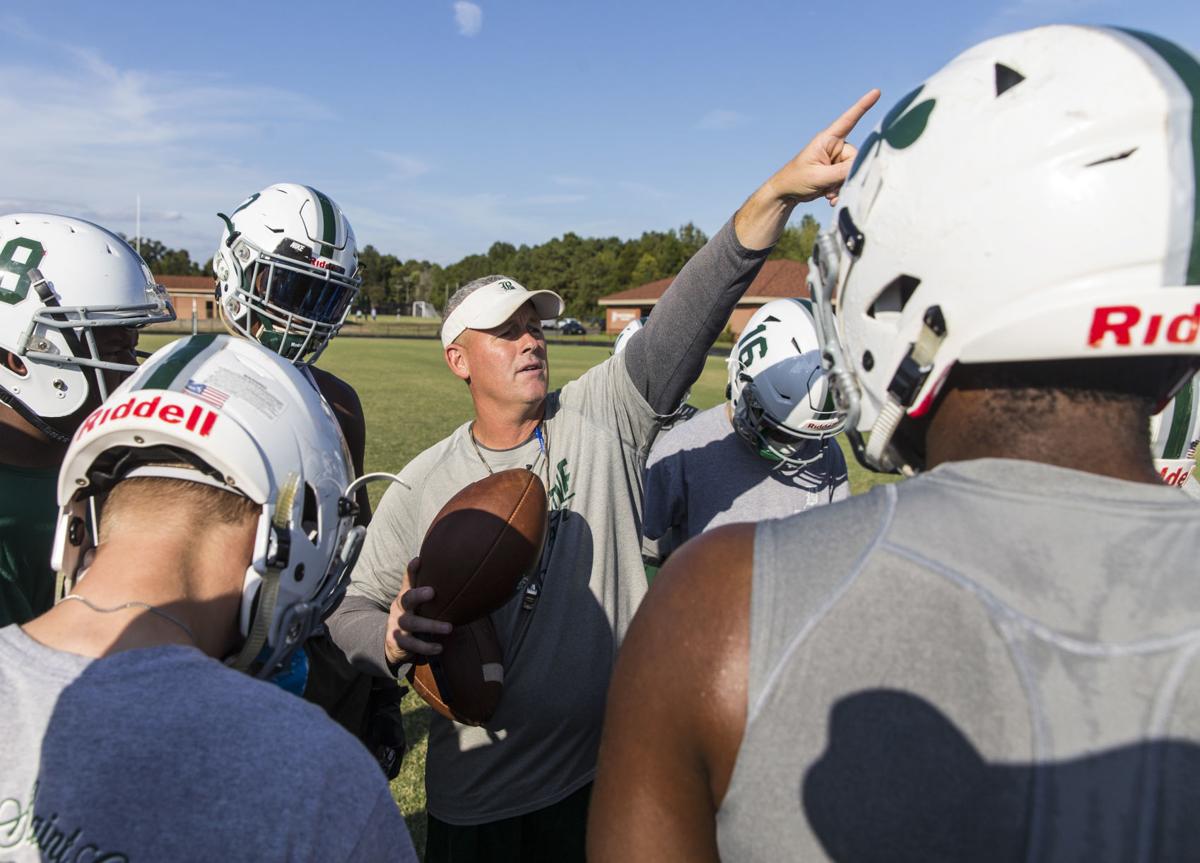 In addition to his duties as head football coach, Lilly also serves as the admissions director at Benedictine College Preparatory School. 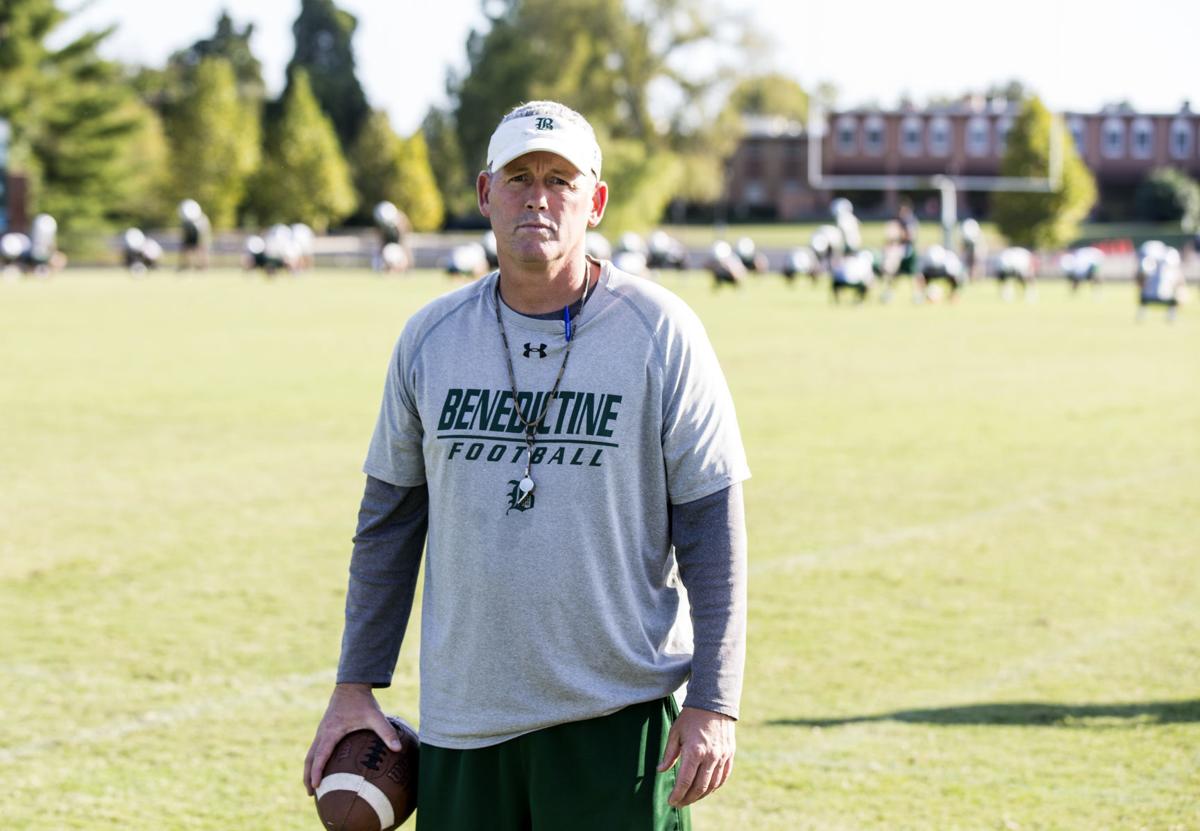 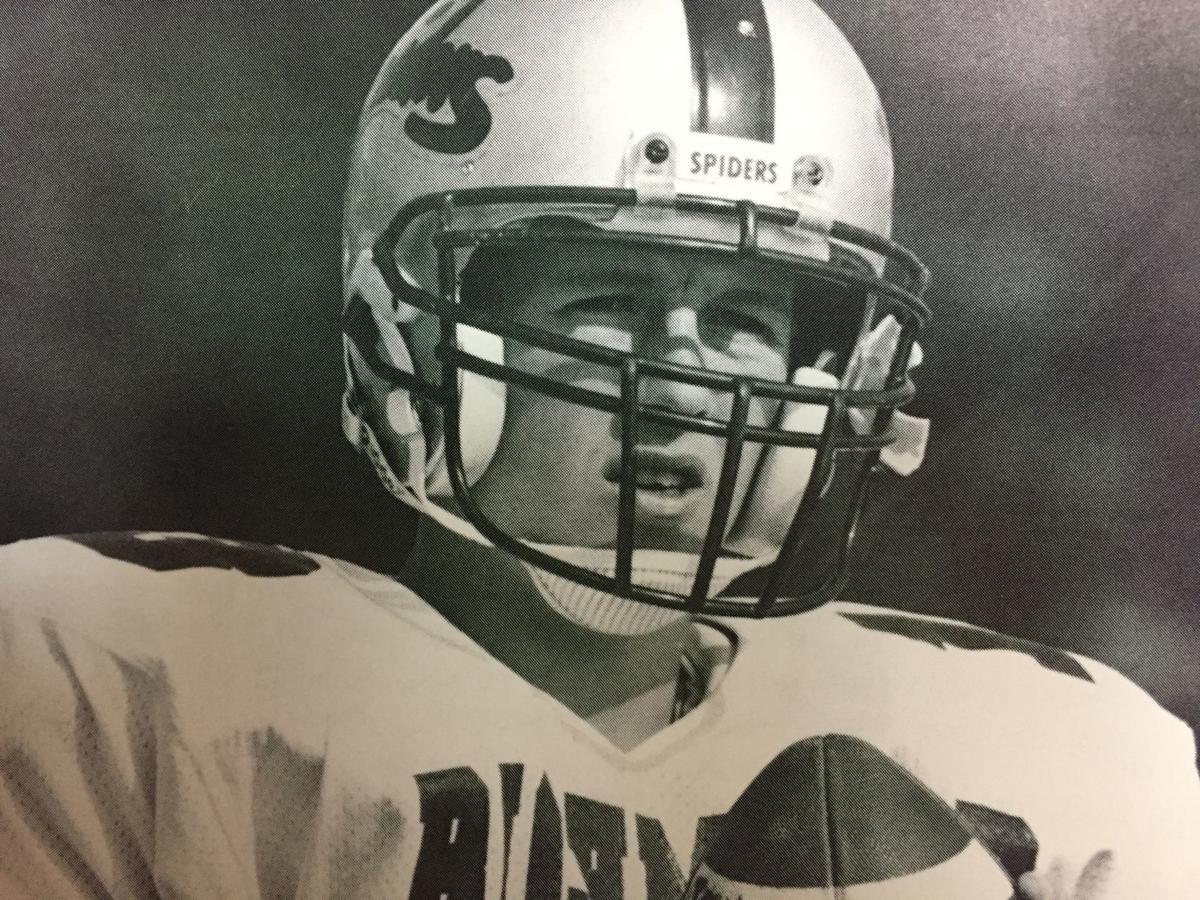 Lilly passed for 6,703 yards and 37 touchdowns during his University of Richmond football career. 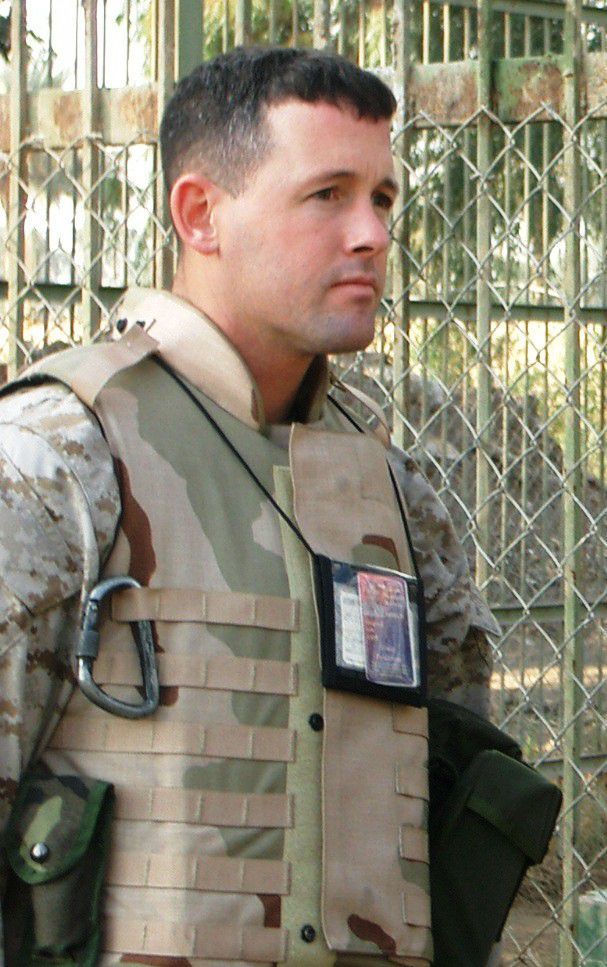 Greg Lilly during his service as a U.S. Marine. 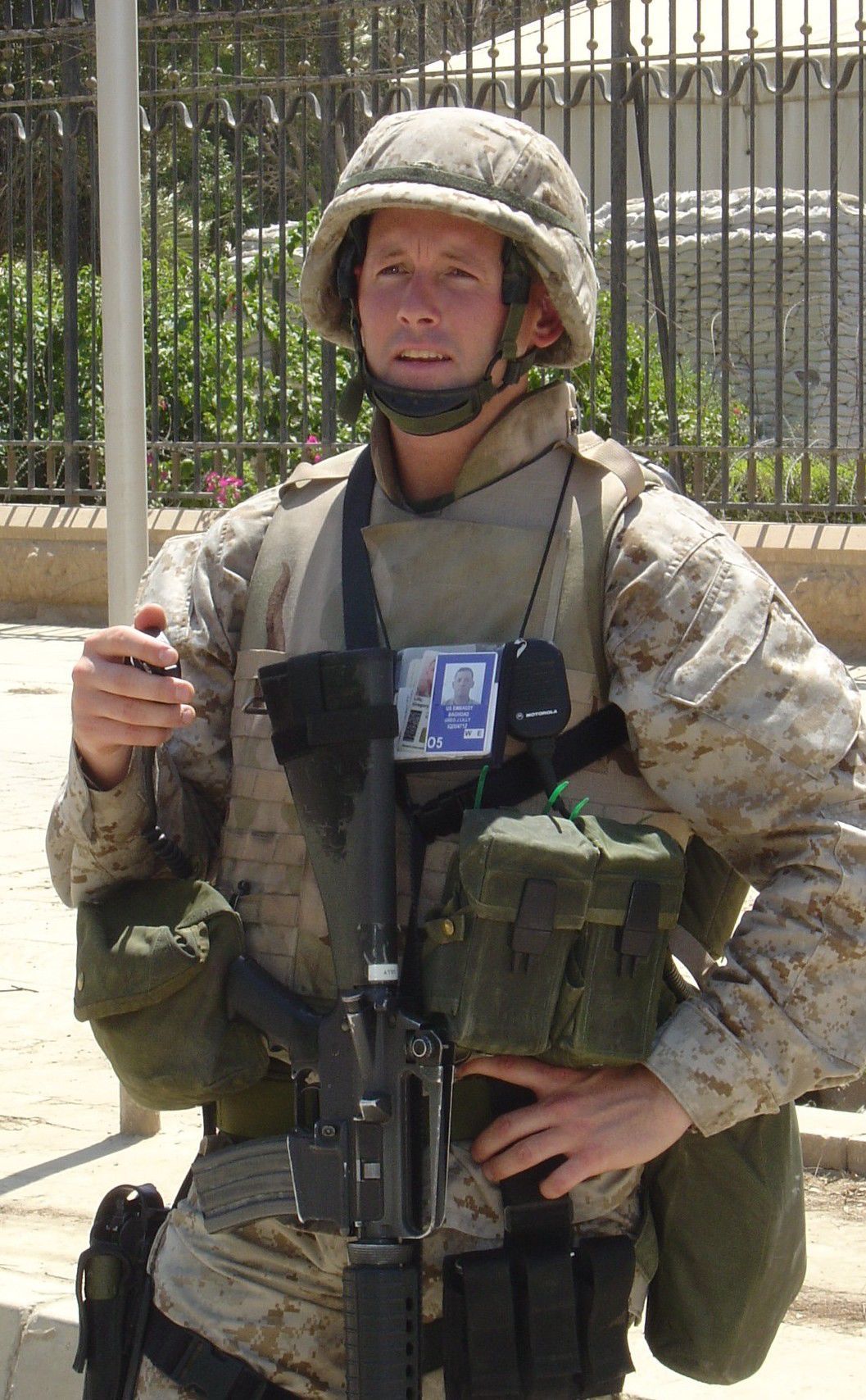 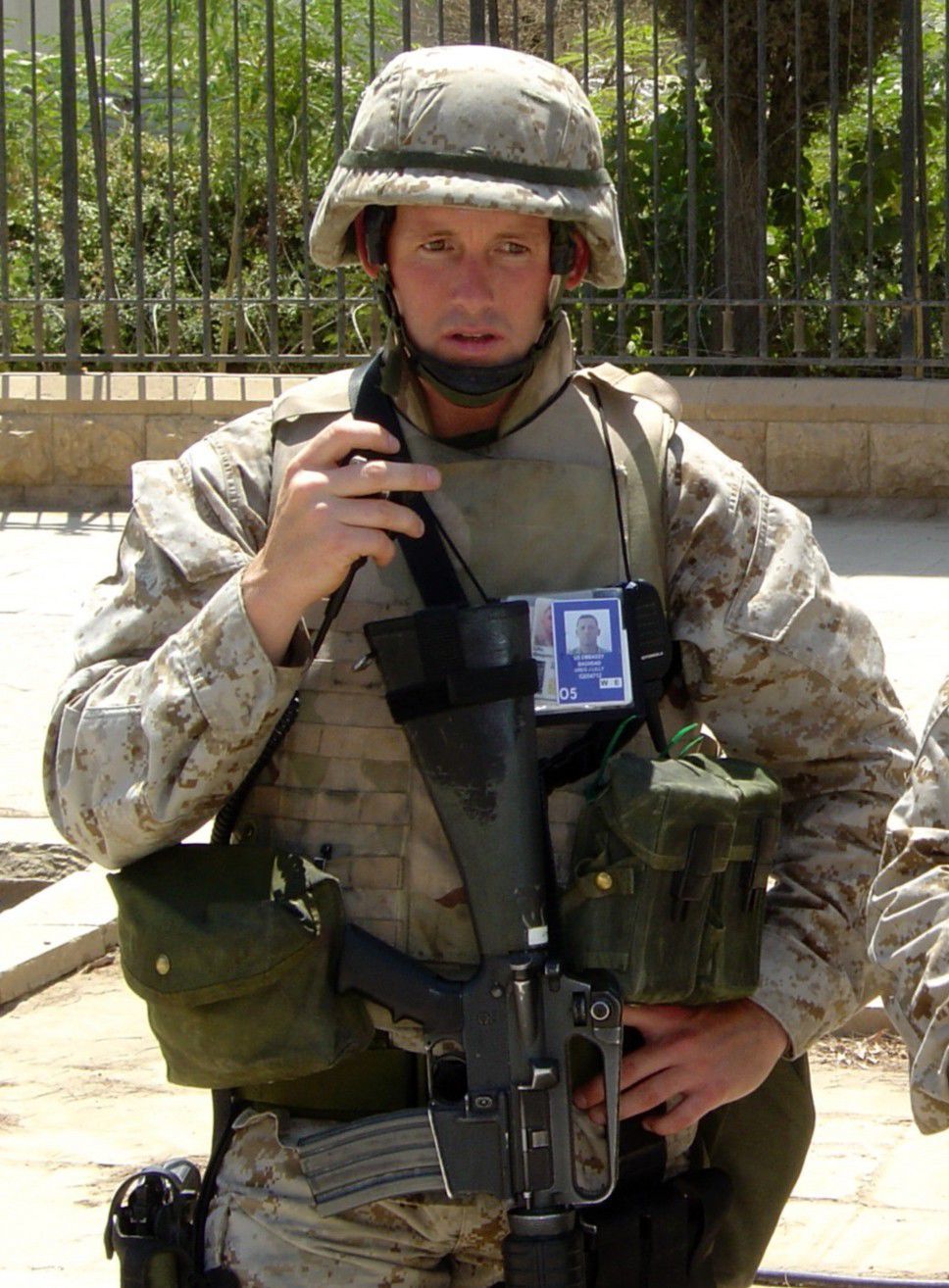 In addition to his duties as head football coach, Lilly also serves as the admissions director at Benedictine College Preparatory School.

Lilly passed for 6,703 yards and 37 touchdowns during his University of Richmond football career.

Greg Lilly during his service as a U.S. Marine.

Greg Lilly was 26 in 1997, a third-year assistant football coach at the University of Richmond, where he had starred as a quarterback. After working briefly in the insurance business, it appeared Lilly had found his professional calling, as a coach.

And then, he heard a louder calling: Lilly enlisted in the U.S. Marine Corps.

Lilly has a cousin, Frank Lilly, and the two played high school football together at Gonzaga College High School in Washington, D.C. Frank Lilly was an All-Ivy League tight end at Harvard, and then became a Marine. The cousins stayed in touch when Lilly was coaching at UR.

“He said, ‘If you miss playing, if you get into the infantry world, it’s very similar to playing football, and it sounds like it’s pretty similar to you coaching football, too,’ ” said Lilly.

Lilly’s platoon in Baghdad secured and protected terrorist targets, and periodically dealt with mortar fire. All 52 of Lilly’s men returned from both Iraq assignments.

“The second one, it was time for me to rotate and maybe go to a career school,” said Lilly. “And I just didn’t want those guys to go back without me. I felt like I needed to be with them. I felt like it was my team.”

Lilly left the Marines in 2005 as a captain, and calls his military experience “very fulfilling. You train so long with the Marines, and then to go see them to do their job very well and very professionally in the environment they have been trained for. … Fulfilling, and humbled by my guys’ professionalism and loyalty and unselfishness and just being great Marines.

“That’s what you remember the most about it, the guys.”

Retired Sgt. Maj. John Thompson of Oklahoma served as the platoon sergeant, second in command, on the deployments of the group Lilly led in Iraq.

“I hold him in high regard because of the way he trained the Marines and took care of the Marines, and ensured that they were all ready to do whatever the call was,” said Thompson. “While we were over there, we took rocket attacks on the compound [being defended] and basically he was that cool, level-headed leader that made sure everybody was where they needed to be, everybody knew what they needed to know.

“That started well before we got to Baghdad because of how he made sure of how his Marines were taken care of in training.”

After his military service, Lilly returned to coaching, first as an assistant at Benedictine College Preparatory School in Richmond, which is a military school, and then as the Cadets’ head coach in 2009.

“Greg, I love him, and he’s done a great job at Benedictine over the years,” said William & Mary coach Mike London, who worked on the UR staff with Lilly in the 1990s. “Sometimes there’s the right fit. That’s a perfect fit for him.”

“Greg is one of the finest guys I have ever met, and he has made a huge, positive difference for so many sons and their parents,” said McGinty.

In addition to his responsibilities as Benedictine’s football coach, Lilly is the school’s admissions director.

“I think all of our experiences continue to help us in the next place we go,” said Lilly, married and the father of two children. “The love I had for my Marines, the love I had for my teammates at Richmond and the guys who coached me, I think all of that has helped me to be a better father, a better husband, and hopefully be a better coach. And on some level, maybe a mentor to these young high-school guys.”

From Chevy Chase, Md., Lilly came to Richmond as a walk-on quarterback and developed into the 1992 Yankee Conference offensive player of the year. In his Richmond career, Lilly passed for 6,703 yards and 37 touchdowns. Both rank fifth on program career lists. Lilly is a member of the UR athletics Hall of Fame.

“He was a leader on the field and a leader off the field,” said Rod Boothes, an All-Yankee Conference receiver at UR during Lilly’s time there. “He went above and beyond when it came to being a team player. He never wanted the spotlight on him.”

In his quiet way, Lilly carries out a regular patriotic observance, even when it’s not Veterans Day. Each weekday afternoon, Benedictine’s students line up in formation as the flag in front of the school is lowered. About that time during football season, Lilly is setting up equipment for Cadets practice on a nearby field.

Lilly stops what he’s doing. He stands at attention and puts his hand over his heart.