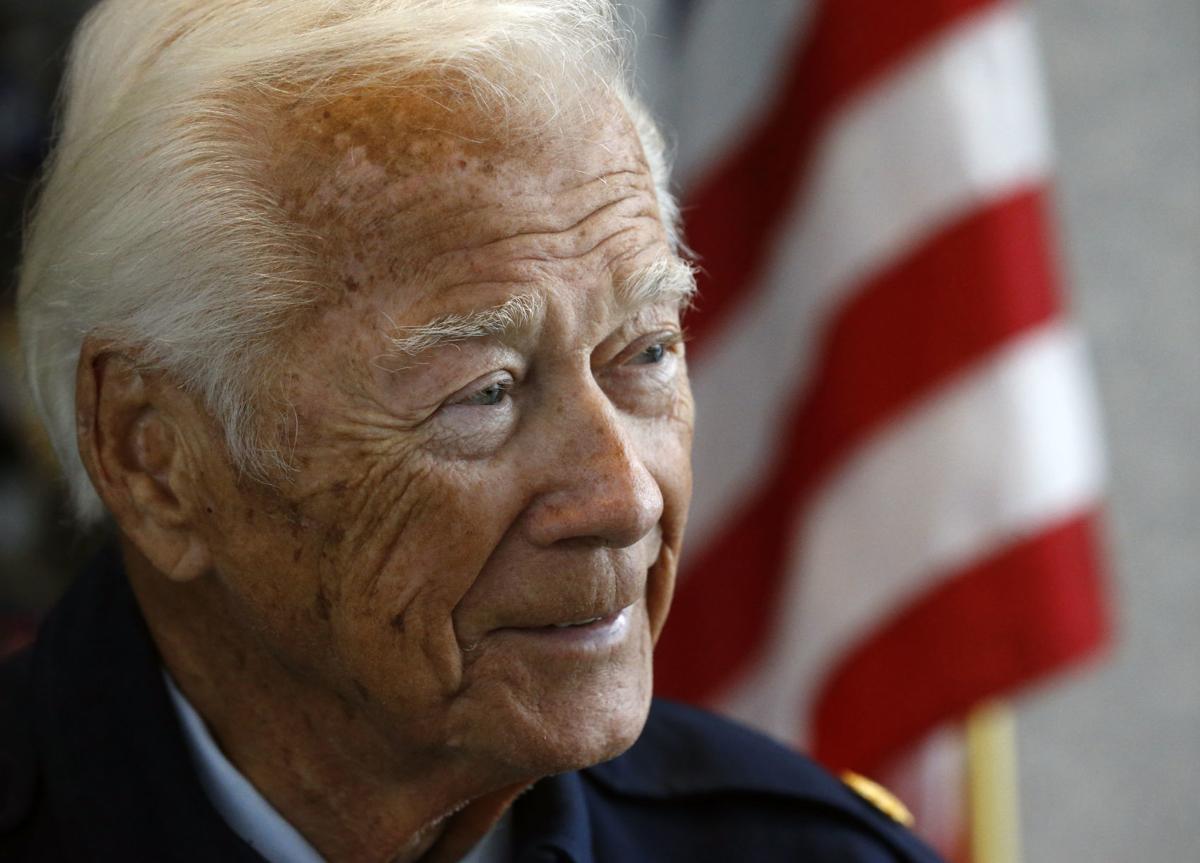 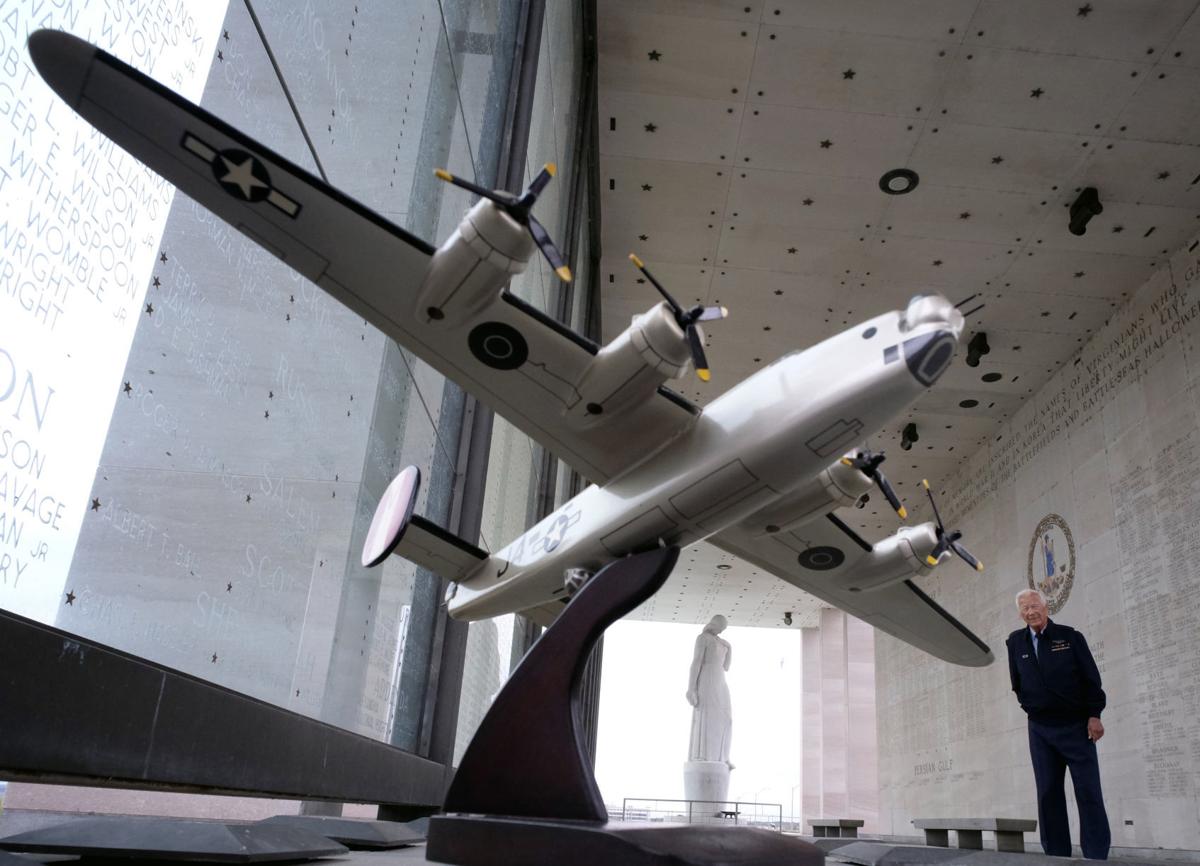 Maj. Dan Dorchak, 95, a bombardier on a B24 Liberator (scale model in foreground) in WWII, pauses in the Virginia War Memorial in Richmond, VA Tuesday, Oct. 8, 2019. 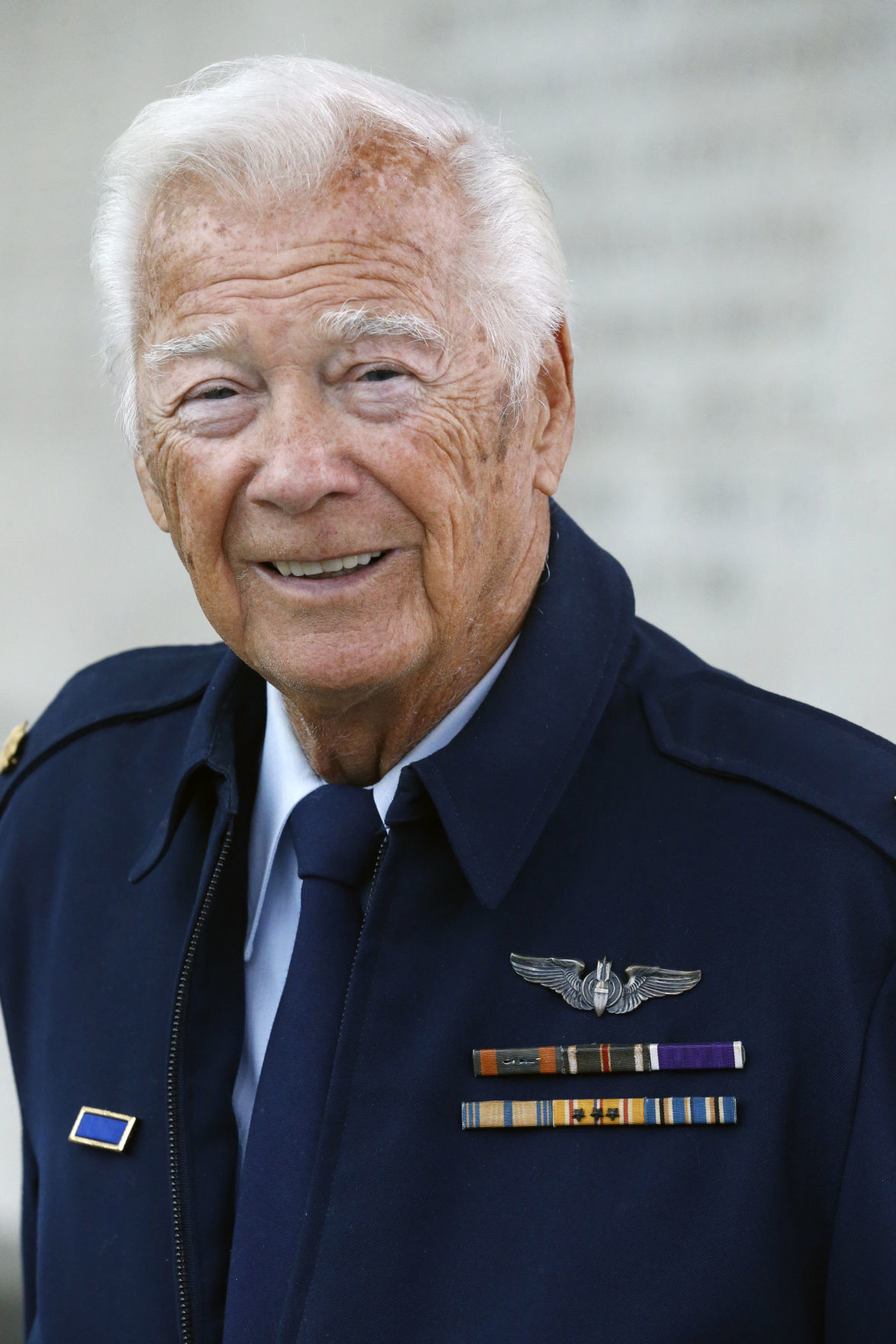 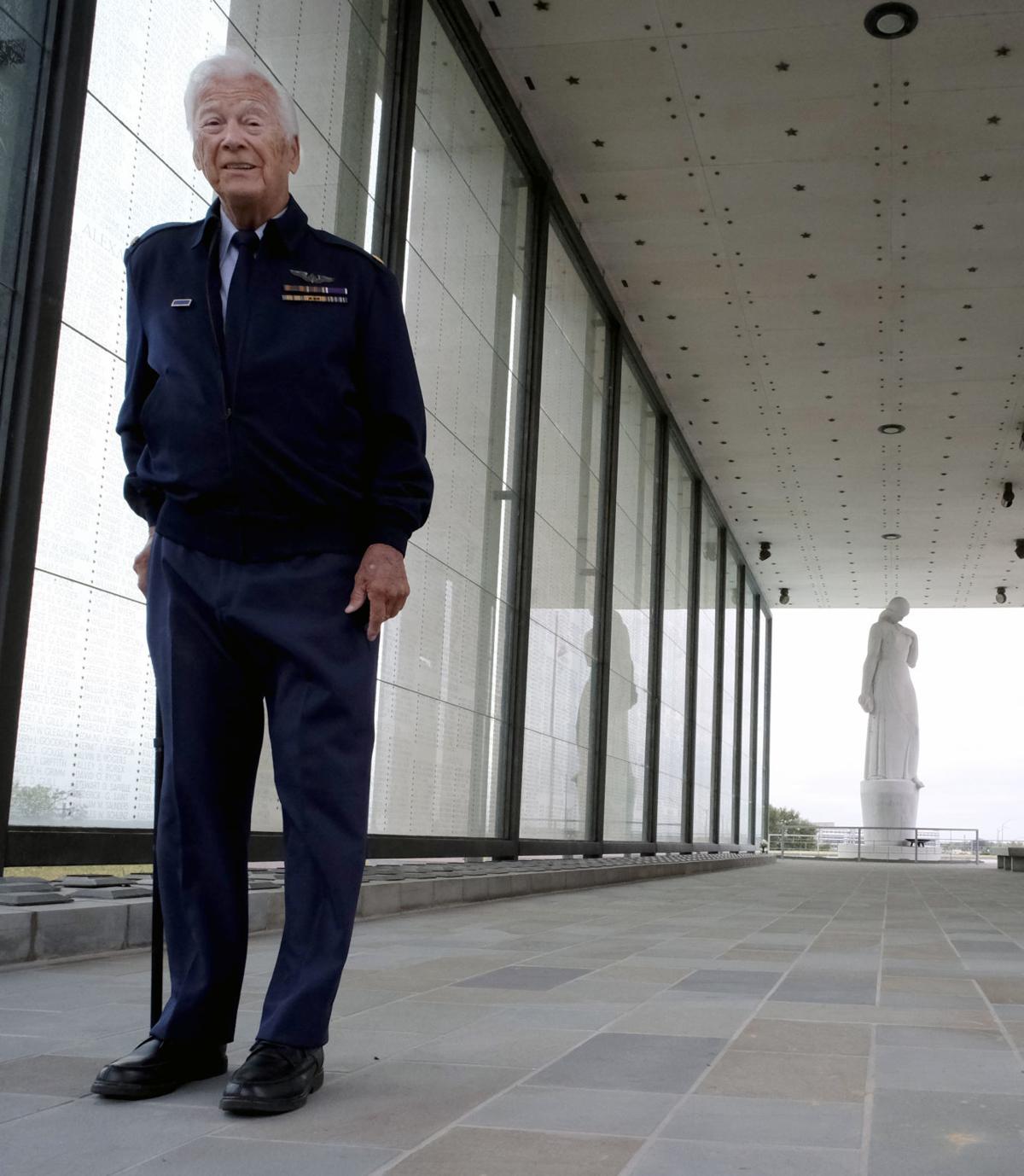 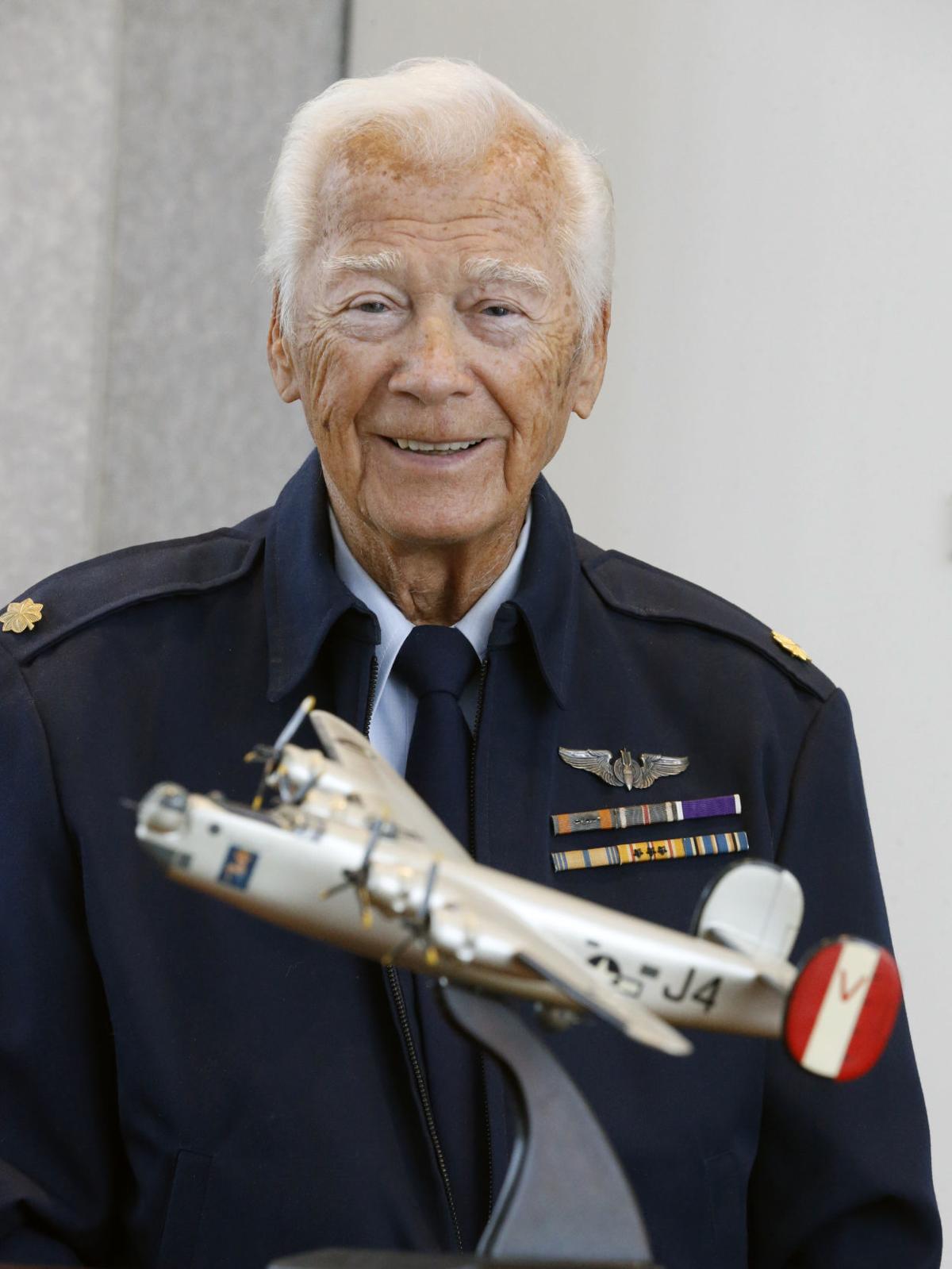 Maj. Dan Dorchak, 95, a bombadier on a B24 Liberator in WWII, looks at a scale model of one of the bombers in the Virginia War Memorial in Richmond, VA Tuesday, Oct. 8, 2019.

Maj. Dan Dorchak, 95, a bombardier on a B24 Liberator (scale model in foreground) in WWII, pauses in the Virginia War Memorial in Richmond, VA Tuesday, Oct. 8, 2019.

Maj. Dan Dorchak, 95, a bombadier on a B24 Liberator in WWII, looks at a scale model of one of the bombers in the Virginia War Memorial in Richmond, VA Tuesday, Oct. 8, 2019.

On a wall just inside Daniel J. “Dan” Dorchak’s front door is a framed collection of some of his military paraphernalia. Included under glass are his uniform jacket, his Purple Heart and Distinguished Flying Cross, and a bullet: the one that passed through the pilot of his B-24 on a May 1945 bombing mission over China during World War II — killing him instantly — and that lodged in Dorchak’s neck.

“I passed out; didn’t know if I was going to live or not,” Dorchak recalled. He said a little prayer, promising to live a good life if he were spared.

A deal’s a deal: Dorchak turns 96 next March.

As it turned out, Dorchak was not seriously wounded. A co-pilot took over the controls of the low-flying plane and landed at a base where Dorchak received medical treatment. He spent about a week in the hospital, and was flying missions again 12 days later.

“I was young and foolish,” Dorchak said with a laugh.

Dorchak, who splits his time between homes in western Henrico County and Virginia Beach, enjoys talking about his military service. He’s particularly gratified when young people approach him to ask questions about WWII, though there’s a rightful connection there because he was only a kid when the war started.

Growing up in Pennsylvania, Dorchak graduated from high school in 1942, months after the Japanese attack on Pearl Harbor brought the United States into the war. He enlisted in the Army Air Corps and eventually wound up as a bombardier. He figured he was headed to Europe, but when he opened his orders he discovered he was going to China, assigned to the 425th bomb squadron of the 308th bomb group — known as the Flying Tigers, commanded by Maj. Gen. Claire Lee Chennault.

The original Flying Tigers were a group of volunteer aviators who fought under the Chinese military before the United States entered the war, at which point they came under command of the U.S. military. The group flew dangerously long missions to support Chinese ground forces against the Japanese by disrupting transportation and supplies, as well as targeting Japanese shipping. The group also pioneered the first “smart” bombs.

It should be noted that as bombardier on that May 1945 mission, Dorchak knocked out three bridges before he was shot. In all, Dorchak flew more than 50 combat missions as a bombardier with the 425th bomb squadron of the 308th bomb group. After the war, he stayed in the Air Force and served in the Virginia Air National Guard, retiring as a major.

His time in service also set the stage for his career once he came home, though he didn’t realize it at the time.

At the base where he was stationed in China, officers were given an additional duty, such as postal officer, mess officer, that sort of thing.

“They made me mortuary officer,” Dorchak said.

“I don’t know,” he said. “I never saw a dead body until I got over there. They gave me a manual, and I was supposed to know what to do.”

“We didn’t have many dead people on the base,” Dorchak said, as most of those who died were shot down or in a plane crash. His work mostly involved returning personal effects to the families of the dead.

“Very seldom did I have any funerals, but it did get me interested in it,” he said.

He came home and enrolled in the Cincinnati College of Mortuary Science, and then came to Richmond to take a job with Bliley’s Funeral Home, where he wound up working for almost 50 years until his retirement. He also taught for 30 years in what is now known as the funeral services program at John Tyler Community College. His specialty was restoring faces damaged in accidents or ravaged by disease.

In the 1980s, he saw a need among grieving families and started a program called Interment of Angels, which provides funeral services free of charge for babies who are miscarried, stillborn or live for fewer than 24 hours.

He reached out to the Catholic Diocese of Richmond and the Bliley family for help in providing the service, which is still carried out through cooperative efforts among Richmond-area hospitals, Bliley’s and the Knights of Columbus. Services are held about every six weeks at Mount Calvary Cemetery, said Jenny Bliley, director of Interment of Angels.

“My legacy is this,” Dorchak said.

Dorchak and his first wife, Madge, were married for 56 years until her death in 2002. He and his second wife, Ann, have been together for 16 years.

Dorchak said he’s managed to reach the age of 95 without cancer or heart problems, but he does have a bad back. “Just old age,” he said. “It wears out.”

The back pain has curtailed his golf game. After getting a recent injection in his spine, he said he planned to resume playing golf — and his other pursuit.

“I’m striving to be the oldest World War II veteran,” he said with a laugh. “I’m still in the running.”