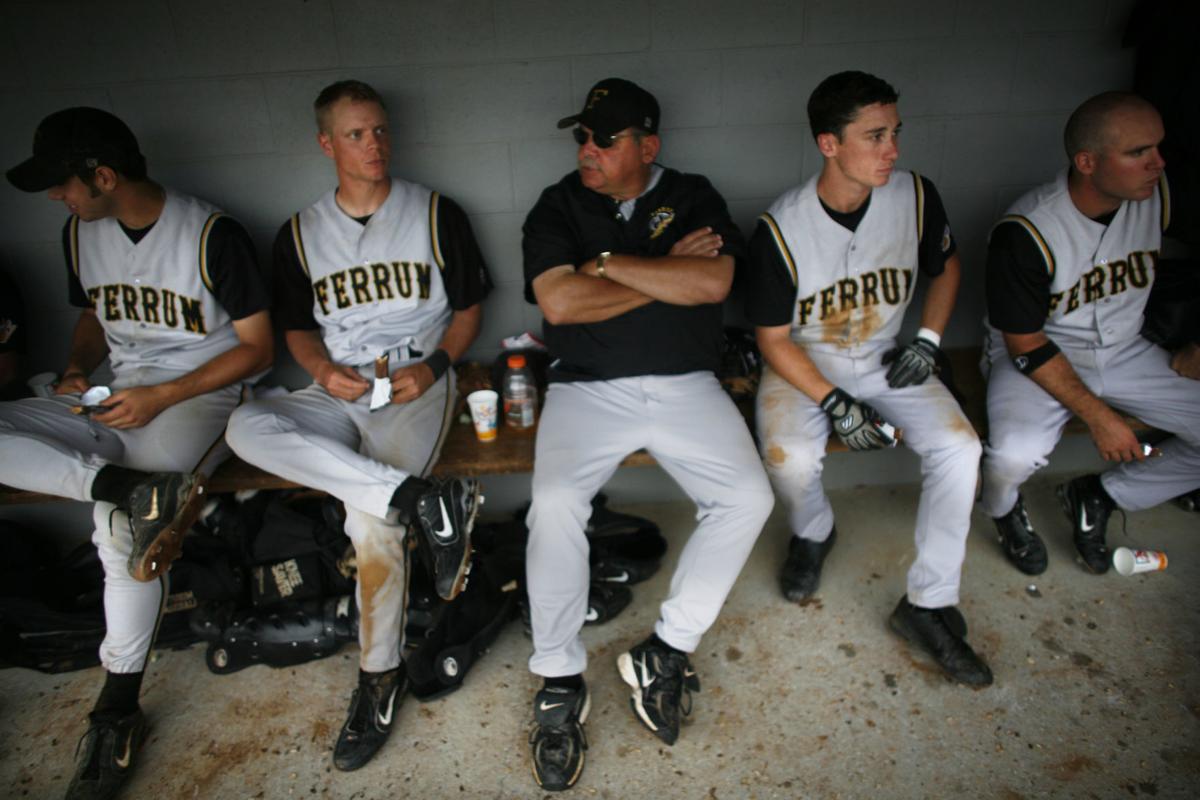 Abe Naff (center), shown during a rain delay in a 2007 baseball game, serve as Ferrum’s athletic director for 15 years. His final season as the Ferrum baseball coach was 2007. 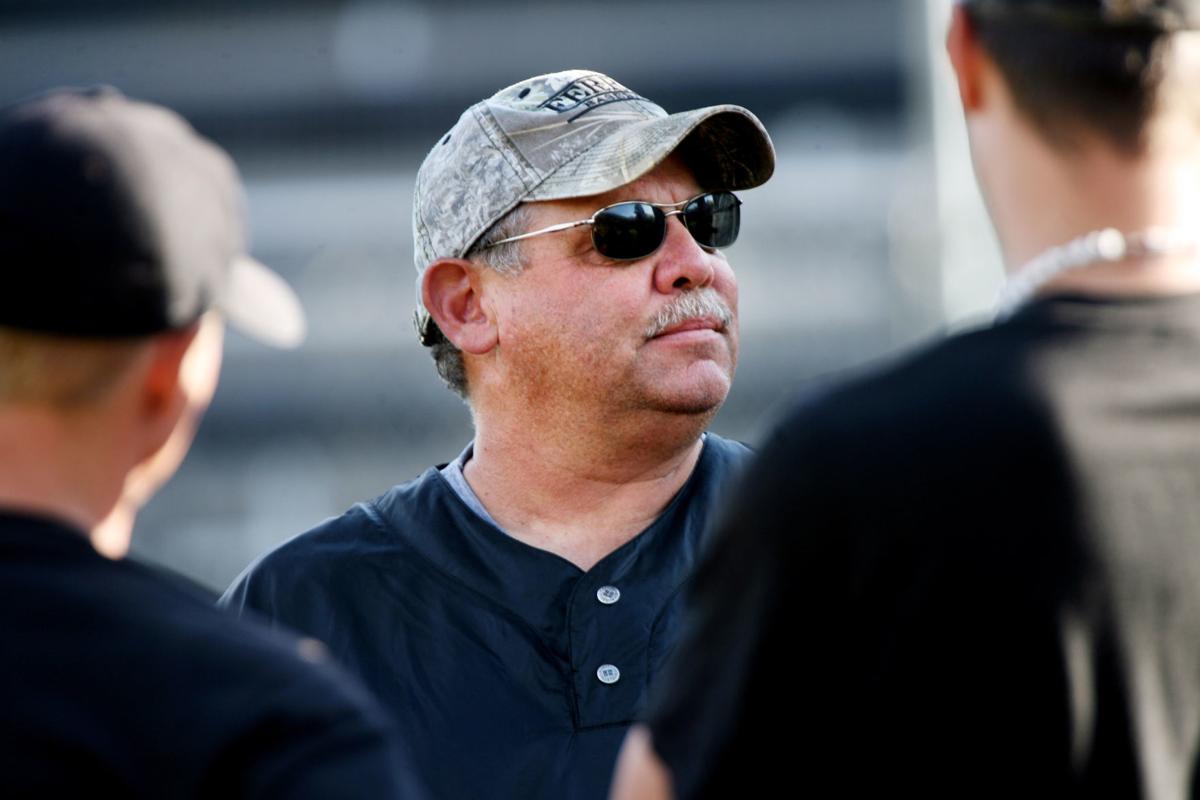 The lawsuit was announced by one of Naff’s lawyers, John Fishwick Jr., in a news release.

The lawsuit states that since losing his job, Naff has suffered from depression and “had thoughts of ending his own life.”

Naff spent 15 years as the school’s athletic director. According to the lawsuit, “his employment was unjustly and unfairly terminated on June 28, 2019.”

“Ferrum College vigorously denies any wrongdoing towards Mr. Naff,” Ferrum vice president for institutional advancement Wilson Paine write in an email Friday. “Ferrum has not seen the lawsuit and does not intend to try this case through the media.”

In October, Naff filed a discrimination complaint against the college with the Equal Employment Opportunity Commission. A news release from Fishwick and fellow attorney Carrol Ching issued at that time had stated that Naff was fired in June 2019 at the age of 59.

Prior to the October news release, neither Naff nor Ferrum had previously said whether Naff’s exit from Ferrum was because he was fired or because he had resigned.

“Ferrum filed a comprehensive response with the EEOC and expects that charge to be dismissed,” Paine said Friday in his email.

Naff spent 23 years as Ferrum’s baseball coach before stepping down after the 2007 season. He did double duty as the athletic director for his final four years as coach.

According to the lawsuit, Naff was diagnosed with prostate cancer during his time at Ferrum. The lawsuit states that the college terminated Naff’s health insurance after he was fired, “knowing that Mr. Naff suffered from prostate cancer and would need medical treatment.”

Naff was blindsided and shocked by his firing, the lawsuit states.

“With the loss of not only his job, but what was a large part of his identity, Mr. Naff was devastated and fell into a deep depression,” the lawsuit states. “Unable to manage the insomnia, stress, anxiety and depression on his own, Mr. Naff sought medical attention and mental health counseling in August 2019. Furthermore, his prostate problems worsened as a result of the termination.

“He has continued with this medical treatment and mental health counseling, as he has struggled to work through the depression, insomnia, crying spells, anger, fear, stress, lack of pleasure and enjoyment in activities, worsened prostate problems and dramatic weight changes he experienced as a direct result of Ferrum College’s actions.

“While he lost weight at first due to the incredible stress he was under, he later started gaining an unusual amount of weight, also attributable to his depression. During this time, he also had thoughts of ending his own life and experienced difficulty sleeping. Essentially, he was unable to function in his daily activities in any normal way.”

According to the lawsuit, Naff “has suffered damages to his reputation in the community, making it harder to seek future employment.”

Ferrum College President David Johns and board of trustees members Judd Mason and George Yancey met with Naff on June 12, 2019, according to the lawsuit. Naff was told that “Ferrum was going in a different direction” and that his employment would be officially terminated in the near future, according to the lawsuit. He was told he was being placed on administrative leave for 21 days “while he considered certain terms of his severance.”

Johns told Naff that the college would say only during the 21-day period that Naff was out on leave, according to the lawsuit.

Ferrum sent an internal email last June stating that Naff had gone on a personal leave of absence.

A week after that internal email was sent, Ferrum sports information director Gary Holden said in a June 25 interview with The Roanoke Times that Naff was “taking some personal leave.”

The lawsuit complains that the internal email and the June 25 interviews went beyond the “out on leave” phrase Johns told Naff the college would stick to. The lawsuit also alleges that Holden and Paine made false statements to The Roanoke Times because the college knew Naff would not be returning to his job.

After Naff filed his EEOC complaint, Paine told The Roanoke Times in October that Ferrum “has been more than fair to Mr. Naff, and we have acted in the best interest of the college and its athletics department.” The lawsuit takes issue with Paine’s assessment.

According to the lawsuit, the college never paid Naff for 10 to 12 unused vacation days. So Naff is seeking at least $4,000 for breach of contract.

As Ferrum’s baseball coach, Naff won 643 games and steered the Panthers to 10 NCAA Division III tournament berths. He is a member of the Ferrum hall of fame and the Salem-Roanoke Baseball Hall of Fame.

As athletic director, Naff had hired every one of Ferrum’s head coaches at the time of his firing. He also helped Ferrum pull off a change in conference affiliation.

The lawsuit mentions that while at Ferrum, Naff “made complaints regarding unequal treatment of men’s and women’s sports,” but there is no elaboration.

Naff is being represented by Fishwick, Ching, Daniel Martin and William Davis. Fishwick declined to be interviewed Friday.