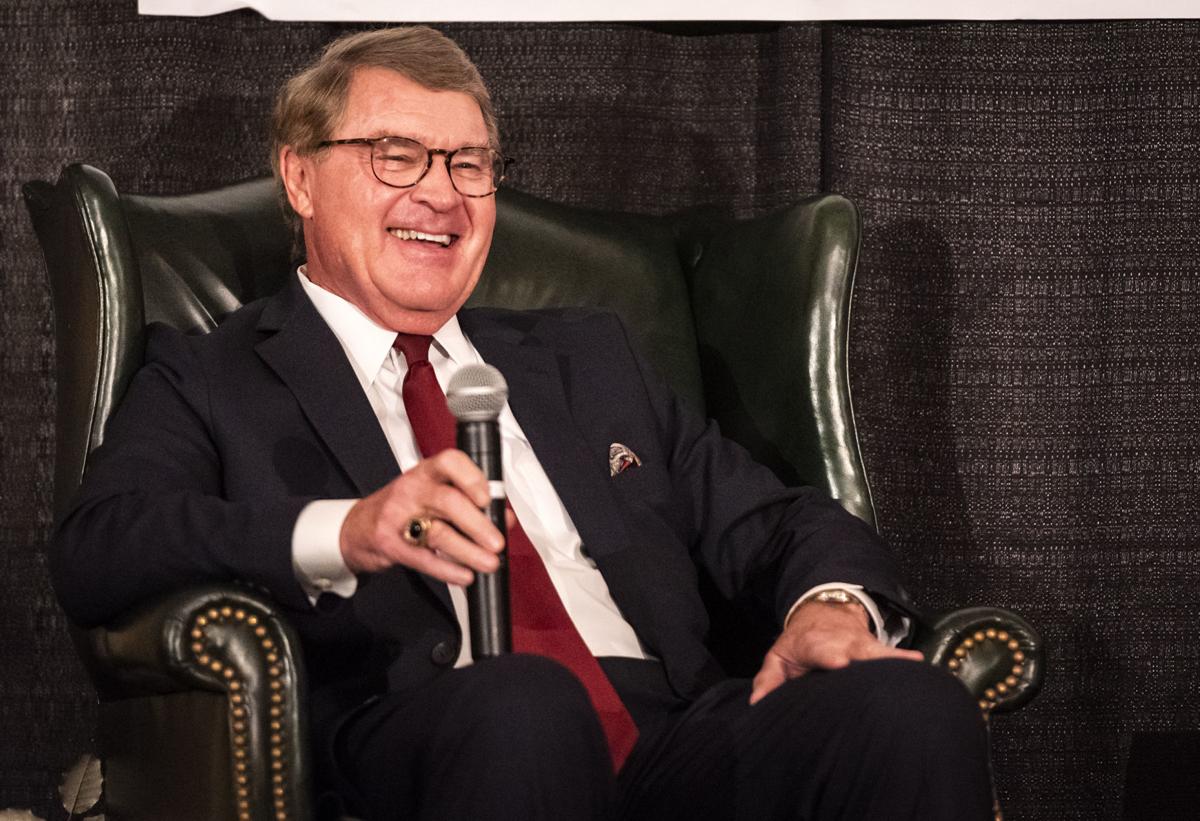 Under the leadership of commissioner John Swofford, the Atlantic Coast Conference has grown from nine to 15 members, including Notre Dame, which participates in many sports outside of football. Virginia Tech joined the ACC — leaving the Big East behind — in 2004. 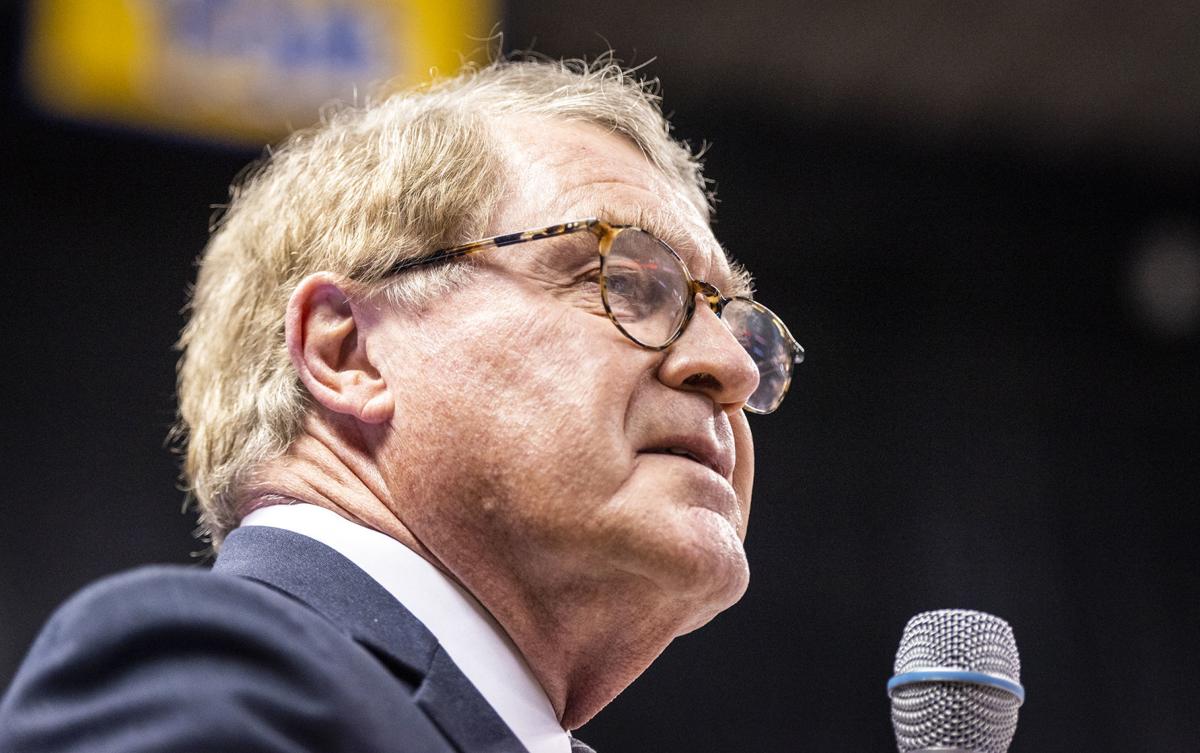 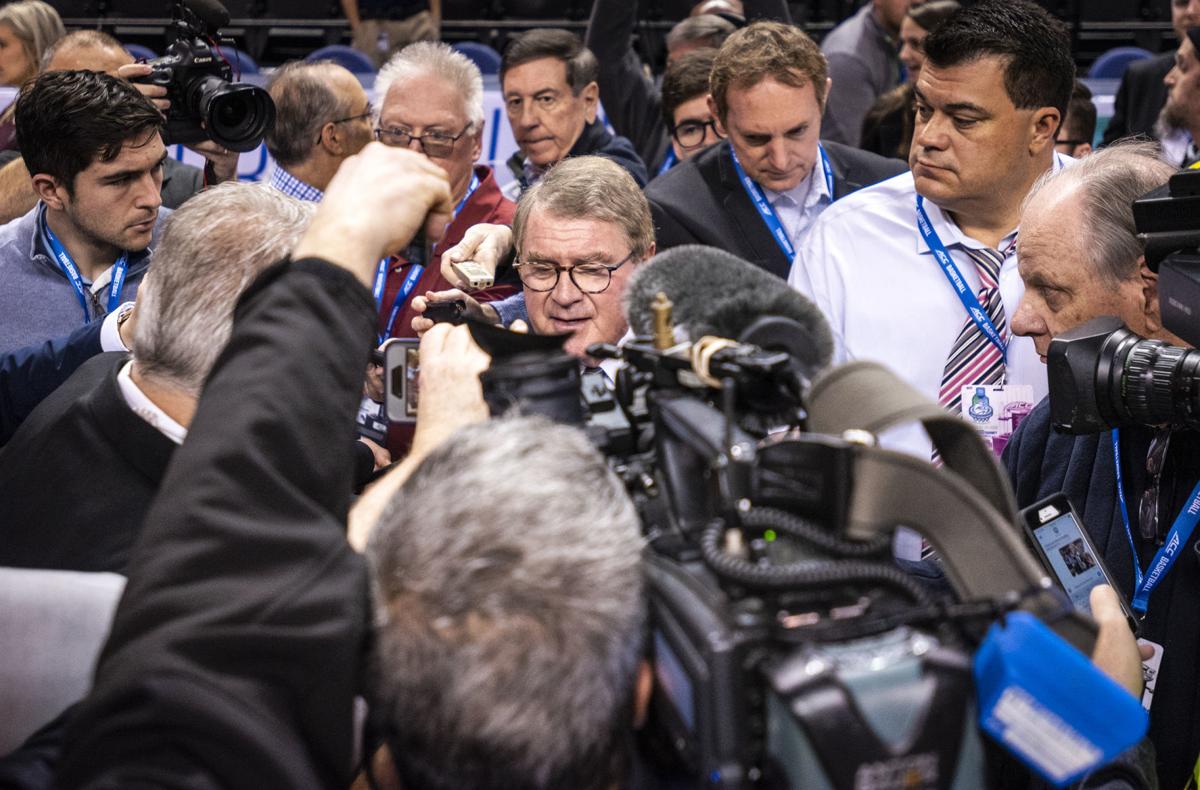 ACC Commissioner John Swofford speaks with members of the media after announcing the cancellation of the remainder of the ACC Tournament on Thursday, March 12, 2020 in Greensboro, N.C.

The Atlantic Coast Conference was forced to deal with two significant periods of realignment in 2003 and 2014, but commissioner John Swofford not only guided the ACC out of possible obscurity but into further national prominence.

Under the leadership of commissioner John Swofford, the Atlantic Coast Conference has grown from nine to 15 members, including Notre Dame, which participates in many sports outside of football. Virginia Tech joined the ACC — leaving the Big East behind — in 2004.

ACC Commissioner John Swofford speaks with members of the media after announcing the cancellation of the remainder of the ACC Tournament on Thursday, March 12, 2020 in Greensboro, N.C.

The Atlantic Coast Conference was forced to deal with two significant periods of realignment in 2003 and 2014, but commissioner John Swofford not only guided the ACC out of possible obscurity but into further national prominence.

John Swofford, the most transformative and longest-serving commissioner in ACC history, is retiring next June.

Swofford, 71, informed his senior staff and league membership of his decision Thursday morning during a series of virtual meetings. During an interview with the Times-Dispatch on Thursday afternoon, Swofford said he and his wife, Nora, have long planned for 2020-21 to be his final year, and that prior to the global pandemic he targeted the ACC’s annual May meetings in Florida for an announcement.

“It was an emotional day in a good way,” Swofford said. “It’s a day where I could look back with a lot of gratitude and look forward with a lot of excitement because I think the time is right. … I’ve never been anywhere where I wished I was somewhere else. And if you can say that in life, that’s pretty special.”

Today, the ACC is 14 strong in football, 15 in many other sports with Notre Dame as a partial member. None of the other 31 Division I conferences is larger, and the Big East doesn’t sponsor football.

So yes, it’s been quite the ride, the turbulence continuing until the end with the COVID-19 and economic crises.

Realignment was central to the best, and worst, of the Swofford era, one marked by his fundamentally decent, optimistic and understated approach.

Without expansion, the ACC risked football irrelevance, if not a fracturing that would have caused its demise. And it certainly would have lacked the large television markets needed to create the ACC Network, which launched in August 2019 and is a signature moment of Swofford’s leadership.

But realignment caused Swofford and the conference untold discomfort, first in 2003 and again in 2012.

In 2003, the nine-member ACC intended to invite Syracuse, Boston College and Miami from the Big East. With 12 teams, the league would have met the then-NCAA minimum for staging a football championship game, an event the Southeastern Conference and Big 12 had embraced during the 1990s.

Per league bylaws, the ACC’s courtships of Syracuse, BC and Miami were public, complete with campus visits from Swofford and other officials. But Virginia politics interceded as then-Gov. Mark Warner, in concert with influential donors at Virginia Tech and the University of Virginia, insisted that the Hokies, then competing in the Big East, be included.

The Hokies have been undeniable assets to the ACC, but the contentious process scarred Swofford and prompted a bylaws revision that allowed for covert expansion discussions.

“The godsend of it all, in my opinion, was Virginia Tech,” Swofford told me years later. “In a lot of ways, Virginia Tech should have been in the ACC a long time ago. I think there was a period there where we were so focused on new markets that the obvious didn’t hit us in the face the way it should have, the obvious being that Virginia Tech belonged in the ACC.”

Under its revised bylaws, the ACC quietly recruited Syracuse and Pittsburgh in 2010 as the league’s 13th and 14th members. Swofford finalized the Notre Dame acquisition in 2012, only to be broadsided two months later when charter ACC member Maryland announced its intention to join the Big Ten.

The Terps’ departure ignited daily speculation that the SEC, Big Ten and Big 12 would poach the ACC for the likes of Clemson, Florida State, North Carolina, Virginia and Virginia Tech.

Swofford navigated the turmoil. Less than two weeks after the Maryland news, the ACC announced Louisville as a replacement, a logical decision that upon further review — the university’s subsequent NCAA and ethical missteps have been well-chronicled — has lost some luster.

Five months later, in April 2013, the 15 ACC members signed a grant of media rights that now binds the group through the 2035-36 academic year.

In the fall of 2013, as if on cue, Florida State began a dominant and undefeated run to the ACC’s first national football championship since 1999, ending the SEC’s seven-year reign atop the sport. Thanks to the Seminoles and Clemson, the ACC has since been represented in each of the six College Football Playoffs — Swofford was an early and staunch advocate for creating the CFP — mirroring the ACC’s annual national relevance in basketball and Olympic sports.

Football’s extended decline, from 2001-12, plus membership drama, contributed to the ACC lagging far behind the Big Ten and SEC in the chase for conference networks and television dollars. The ACC’s average distribution to its 14 full-time members in 2017-18, the most recent year in which all the Power Five revealed their finances, was $29.5 million.

ACC athletic departments have done remarkably well with less, and though the Big Ten’s and SEC’s larger enrollments and fan bases contribute to the financial gap, the disparity has created tension between the league office and member schools.

Commissioners don’t hire or supervise on-campus personnel, but the victories, disappointments and transgressions that occur on those campuses reflect on the conference and contribute to the job’s myriad challenges.

Each of Swofford’s predecessors — Jim Weaver, Bob James and Gene Corrigan — served at least a decade but not more than 16 years. Swofford has been the longest-tenured active Power Five commissioner since the Big Ten’s Jim Delany, a former North Carolina basketball player, retired Jan. 1 after 30 years on the job.

A North Wilkesboro, N.C., native, Swofford graduated from UNC in 1971 — his older brother Jim played football at Duke. He earned a master’s in athletics administration at Ohio University and began his career in 1973 as ticket manager at UVA, where Corrigan was athletic director.

Swofford returned to his alma mater in 1976 as an assistant athletic director and in 1980, at age 31, the university made him Division I’s youngest athletic director. He served in that position until succeeding Corrigan as ACC commissioner — then-Virginia AD Terry Holland also was a finalist for the job.

“I’ve been blessed with a long career in a league I grew up with, watching my brother play in, and having had the opportunity to play in it and work in it. If you’re going to have a career in college athletics, especially for someone who grew up in the ACC footprint, I don’t know how it could get any better than spending it at UVA, UNC and the ACC.”

Now Swofford is ready for the golf course and full-time grandparenting. He will exit with far more triumphs than setbacks and enduring respect and admiration, witness the flood of tributes Thursday’s news prompted.

“In short,” Duke athletic director Kevin White said in a statement, “we have been fortunate to work with one of the finest leaders in the history of college athletics.”

Maybe they can find a stronger leader and turn things around. In great part based on revenue, the ACC is considered to be 4th among the top 5 conferences. It's focus on the Carolina schools makes it feel like a small, regional conference.

Alumni of every ACC school not named UNC, cheer.